The Weasley Brothers Are at Exmoor Zoo 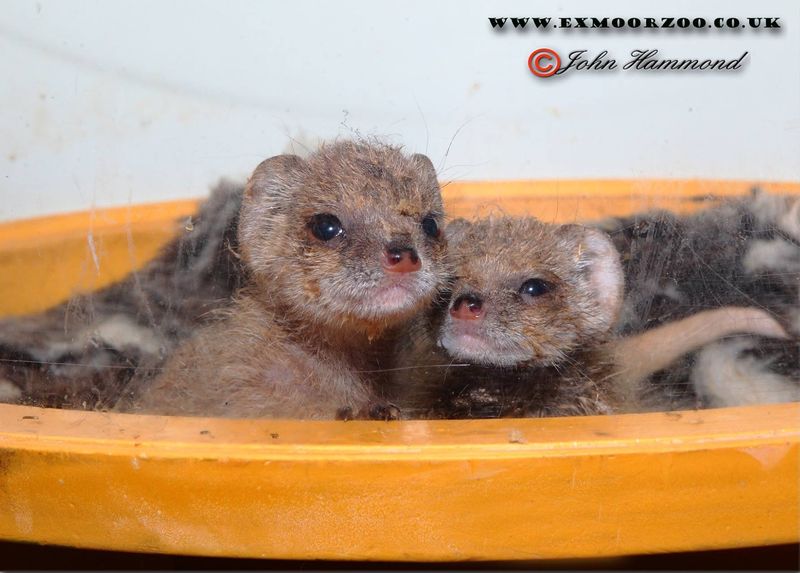 Meet ‘Mumbles’ and ‘Wiggles’, also known as the ‘Weasley Brothers’! The two Yellow Mongoose brothers were born, in late January, at Exmoor Zoo. 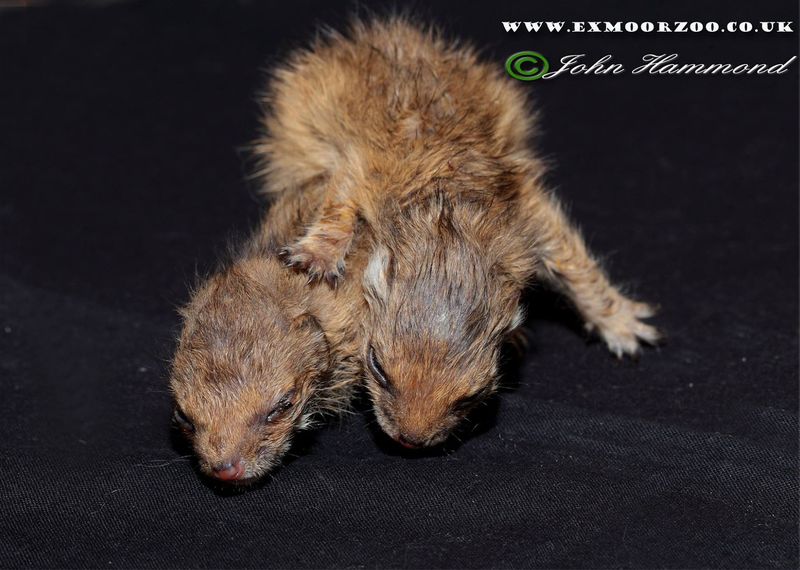 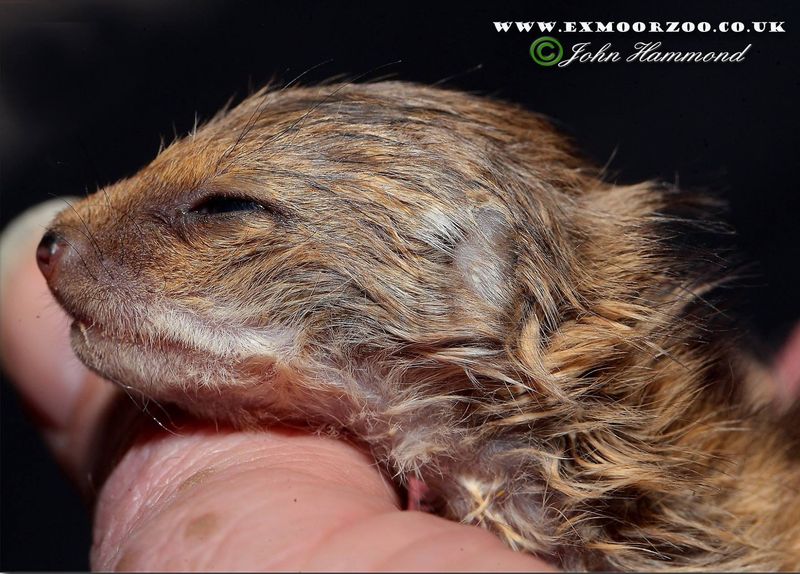 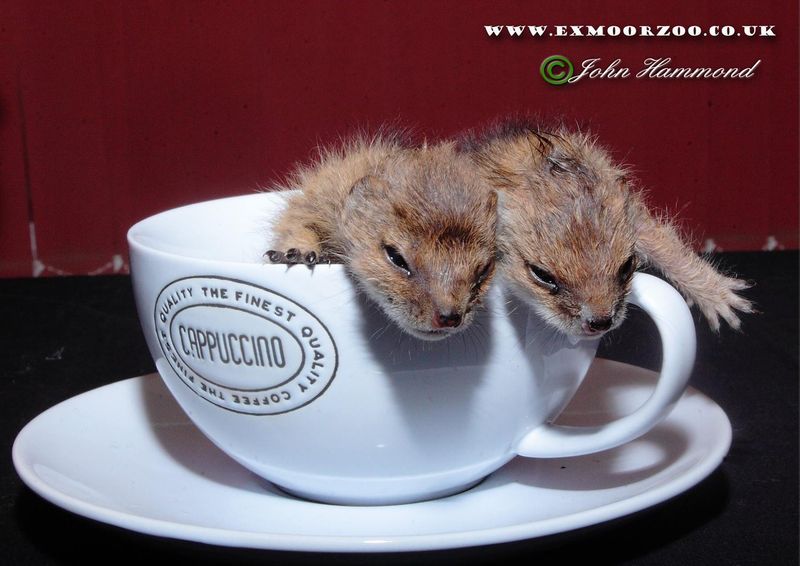 According to Zoo Curator, Danny Reynolds, the zoo has looked after the species for more than 15 years, but this is the first time they have had success with babies reaching the age of Mumbles and Wiggles. The parents had a litter in the past, but due to the mothers advanced age, she was unable to produce enough milk. This time around, zoo staff decided it would be in the best interest of the brothers to intervene, and they began hand rearing the pair.

Zoo staff will be providing extended hands-on care for the brothers, over the next eight weeks. Then, the duo will be placed on exhibit, for visitors to observe.

The Yellow Mongoose is sometimes referred to as the ‘red meerkat’. Their average adult weight is about 1 pound, and they generally reach a length of about 20 inches. Their native habitat is in open country, from semi-desert scrubland to grasslands in Angola, Botswana, South Africa, Namibia, and Zimbabwe.

The Yellow Mongoose is carnivorous, consuming mostly arthropods, but they are known to dine on other small creatures, such as: lizards, snakes, and eggs of others species.

They generally mate between July and September, and they usually give birth between October and December. Usually, two offspring are produced, and they are weaned at about 10 weeks of age. They reach adult size after 10 months.

The Yellow Mongoose is currently classified as “Least Concern” on the IUCN Red List.

More adorable pics, below the fold!

Continue reading "The Weasley Brothers Are at Exmoor Zoo" » 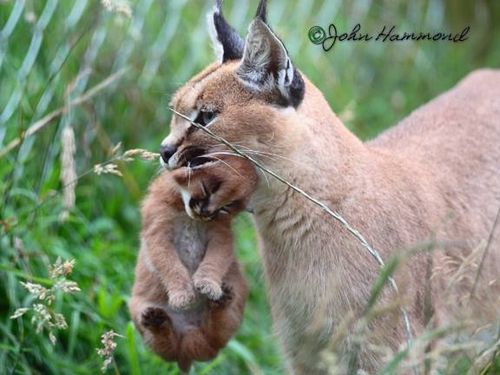 The dog days of summer may be coming to a close, but the cat days seem to be just starting: Exmoor Zoo in England welcomed a Caracal kitten in mid-August, and it is a joy to see the mother completely devoted to caring for her new baby. Mom and kitten were spotted taking a lunchtime bath and snooze together about a week ago on August 24. The kitten is pictured at just one week old. The little one still has eyes closed and gets carried around everywhere by mom. Caracal kittens will open their eyes between four and ten days old, and nurse until they are weaned at about ten weeks. 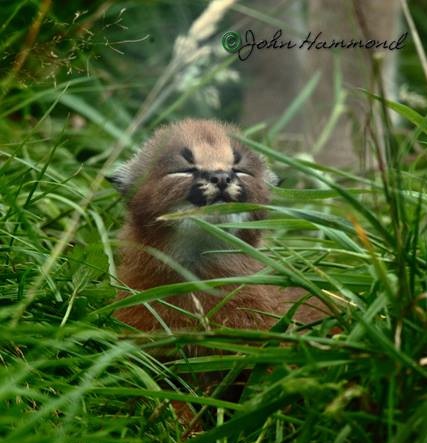 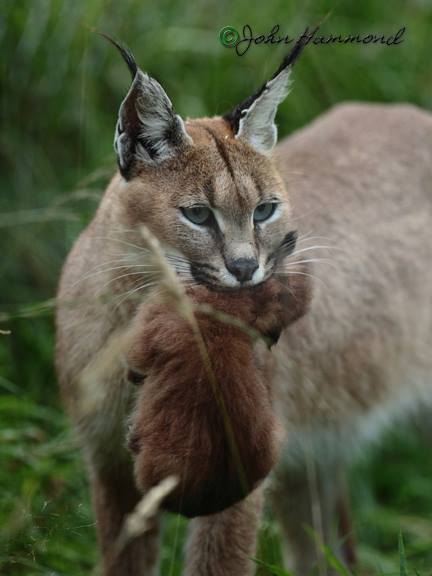 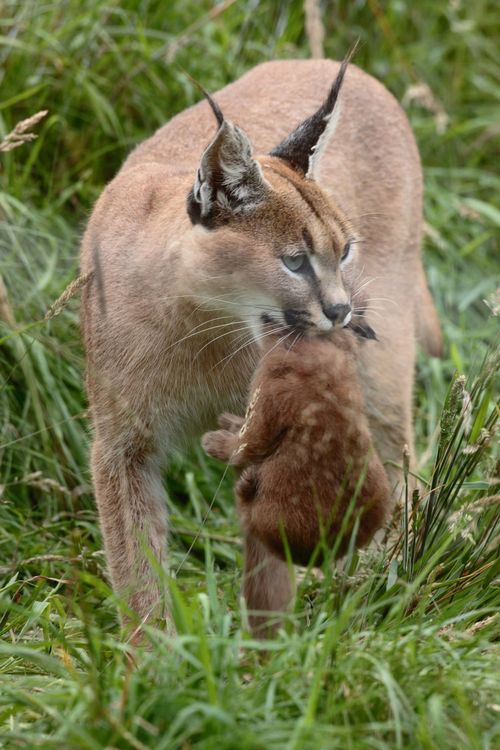 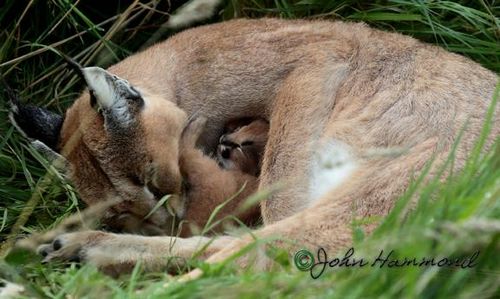 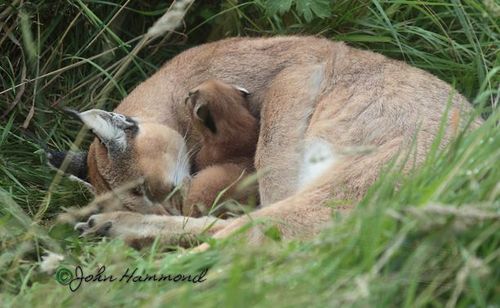 A Pile of Otter Pups at the Exmoor Zoo 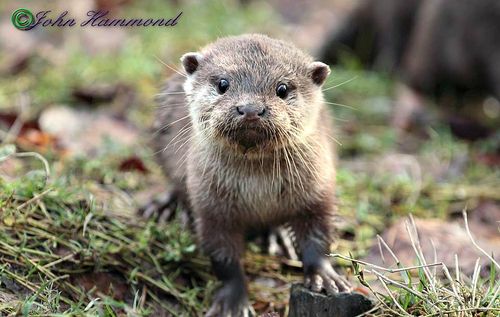 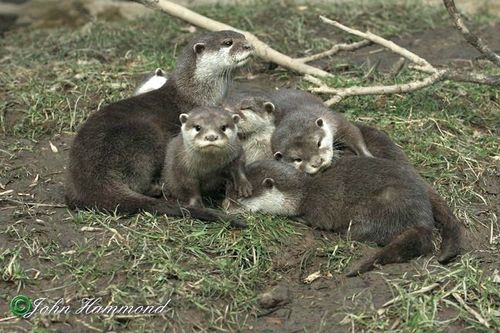 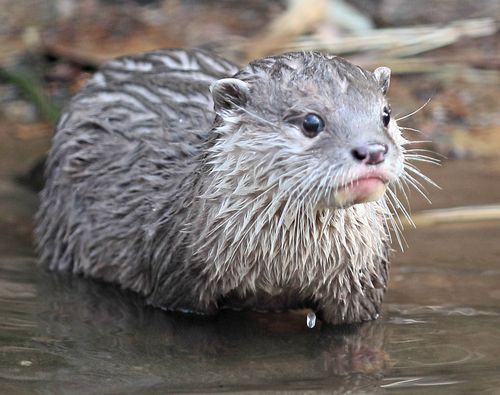 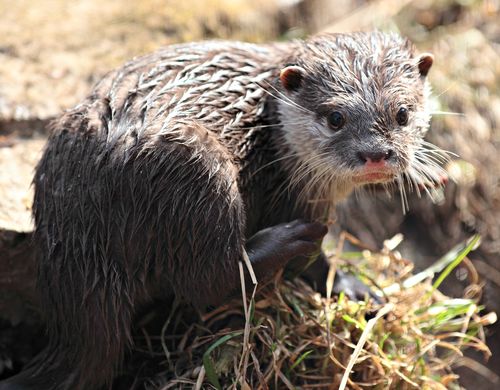 Reaching a length of about three feet (90 cm) including the tail, these Otters are excellent swimmers.  Streamlined torpedo-shaped bodies, flattened heads, and short legs allow Otters to move through the water quickly.  Partially-webbed paws give these Otters the ability to manipulate the mollusks, crabs, and other aquatic animals on which they feed.

Asian Small-clawed Otters build dens in riverbanks, where they live in extended family groups.  Scent is very important for communication:  their feces, called spraint, are used as territorial markers to establish boundaries.  The Otters also construct small mounds of gravel, sand, or mud, then mark these mounds with their scent glands.

Listed as Vulnerable by the International Union for Conservation of Nature, Asian Small-clawed Otters are threatened by rapid habitat loss and pollution.

See more photos below the fold!

Continue reading "A Pile of Otter Pups at the Exmoor Zoo" » 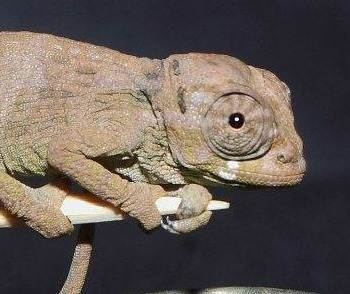 Two tiny and very delicate Johnston’s Chameleons hatched the UK’s Exmoor Zoo. Just over an inch (3 cm) long, the babies had an auspicious start in life:  they were laid by a female that was part of an illegal shipment en route to the Czech Republic and seized by customs agents in Belgium.

Because Johnston’s Chameleons occur only in the western branch of Tanzania’s African Rift Valley – the Albertine Rift – they are extremely rare in captivity, according to Danny Reynolds of the Exmoor Zoo.  “They are probably the first of this species ever born in captivity within UK zoos,” he said. 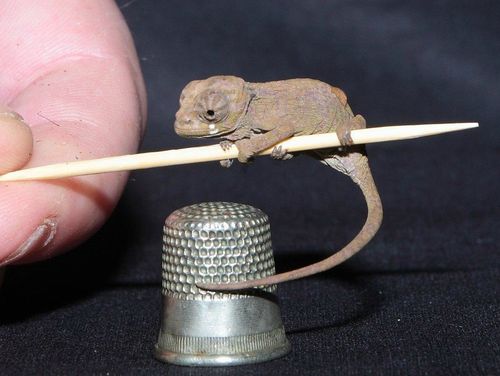 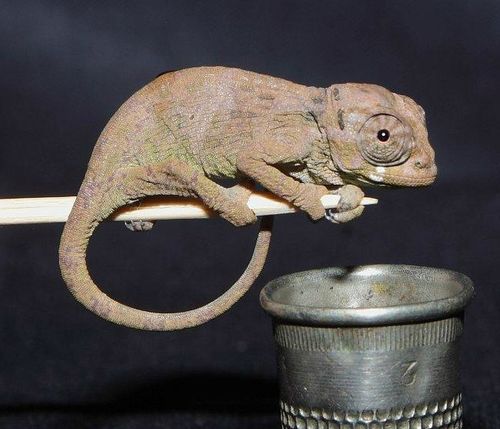 The illegal shipment of 59 Chameleons was due to be destroyed when the UK’s Specialist Wildlife Services and UK Customs officials intervened and placed all the lizards in UK zoos. Females at several other zoos have laid eggs, but those at the Exmoor Zoo were the first to hatch.

Like all Chameleons, Johnston’s Chameleons are zygodactylous – they have two toes pointing forward and two toes pointing backward, which enables them to easily cling to tree branches (or toothpicks, as seen in the photos above).  They capture insects with their long, extrudable tongues.  In captivity, the babies are fed fruit flies and day-old crickets. 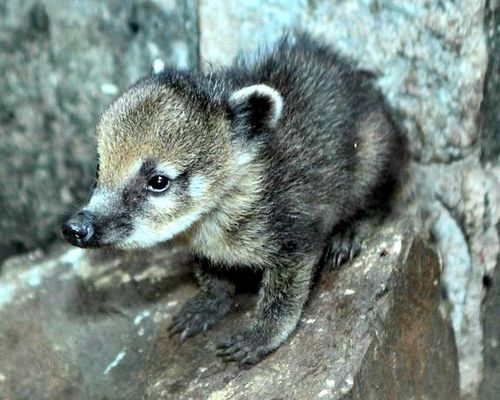 Two baby Coatis are charming visitors at the U.K.’s Exmoor Zoo. The pair was born earlier this month.  Native to Central and South America, Coatis use their long, flexible snout to search for insects, spiders, fruit, and small animals. 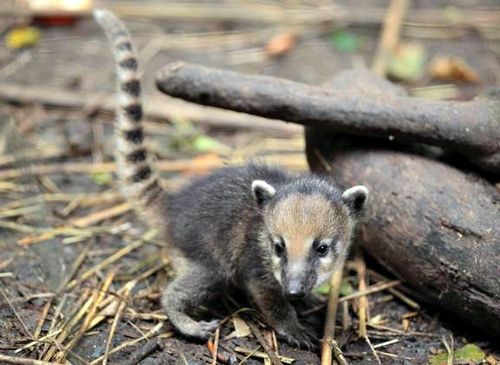 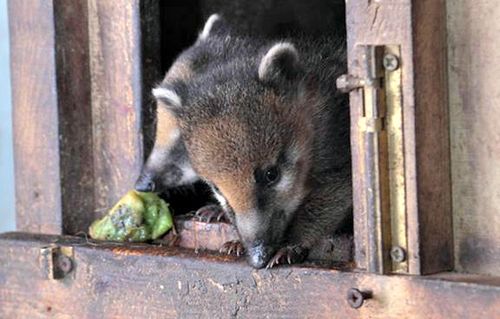 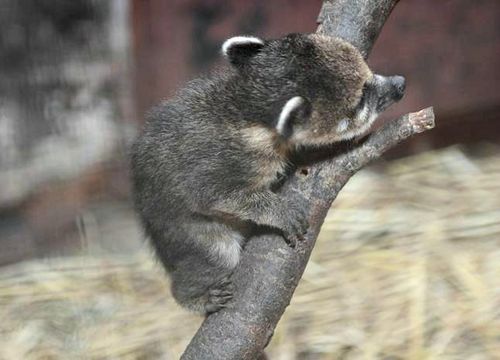 As close relatives of raccoons, Coatis exhibit agility, intelligence, and adaptability.  They can be found in a variety of habitats, from tropical rain forests to high mountain slopes. Coatis commonly forage on the forest floor, using their pig-like snout to push aside leaf litter as they look for food.  They are easily identified by their long, striped tail.  Coatis may travel in loose groups of up to 25 individuals.

While not listed as threatened, Coatis face pressures from habitat destruction and unregulated hunting.

Puma Cubs Greet the Day in the UK 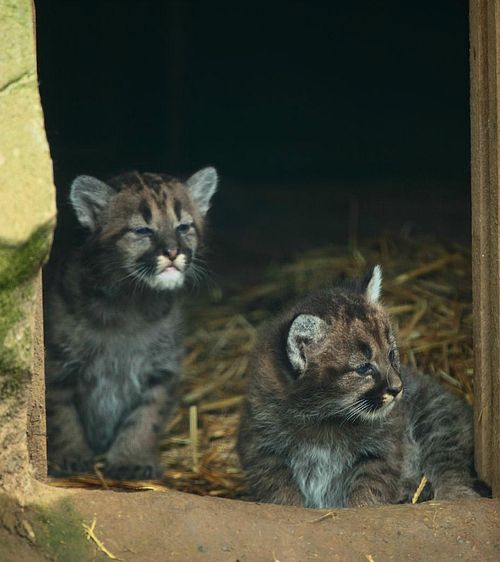 The UK's Exmoor Zoo just announced the birth of three beautiful Puma cubs! Born on March 31, the zoo kept them a secret until they could be seen at the mouth of their den in their enclosure. These five-week-old cubs look nothing like their parents as they are all covered in camouflaging spots.
Curator Danny Reynolds said “We are all so proud of Fu and Nikko, our adult pumas, as this is the first time either have been parents." The parents and cubs progress has been carefully monitored by zoo staff and the babies are thriving.
Pumas are one of the most secretive large cats in the world. They go by many names, from Mountain lion to Cougar. Very few are maintained in Zoos compared to years ago; Fu and Nikko have both been bred in Europe and brought to the UK to help reverse that scenario. The UK has less than three actual pairs spread around its shores. In the wild, this cat has one of the largest distributions of any mammal covering two of the biggest land masses on earth -- North and South America encompassing both the Andes and Rockies as well as the Amazon rainforest. Like the leopard, the puma is extremely adaptable and able to live around people without being seen or noticed in the wild. Their terriroty often can cover an area of 100 square miles. 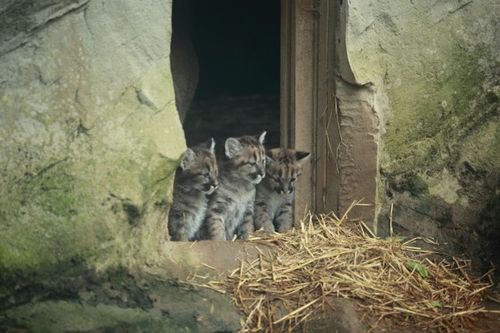 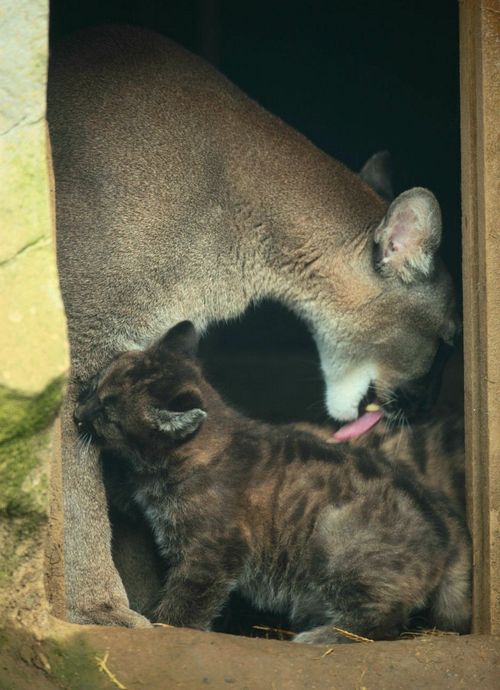 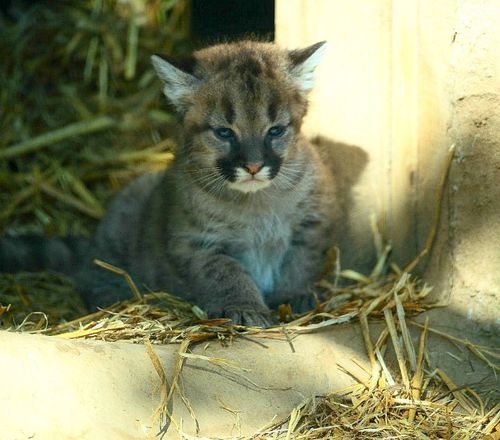 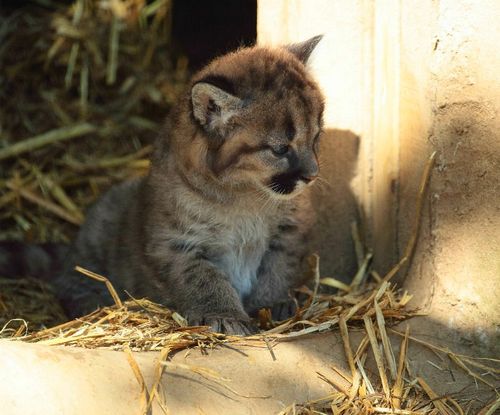