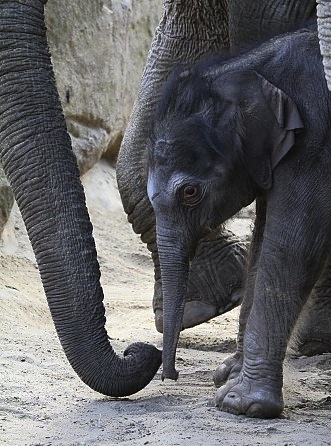 On July 15, Emmen Zoo in the Netherlands welcomed a healthy male Asian Elephant calf. Mother Htoo Yin Aye gave birth outside at 6 p.m. as visitors looked on. The calf is the 25th elephant to be born at Emmen Zoo. He enjoys spending time outside every day with his mother, father Radza, sister, and two older brothers. He is pictured here with his family at just one day old.

The calf weighed about 220 pounds (100 kg) at birth, an average size. It takes a long time to grow such a big baby; the gestation period of an elephant is longer than that of any other mammal, lasting 22 months. They are also long-lived animals, sometimes reaching 70 years of age in the wild. Asian Elephants are an endangered species, living in small, isolated populations in south and southeast Asia. They are similar to African Elephants, but have a smaller body size and more rounded ears, which they use to radiate excess heat from the body. There may be only 30,000 to 50,000 Asian Elephants left in the wild. Wide-ranging herbivores, they are important seed-dispersers that help to maintain biodiversity in grasslands and forests. 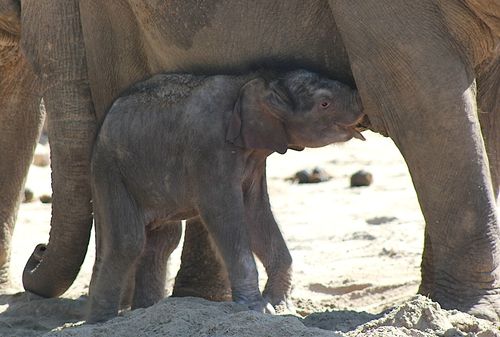 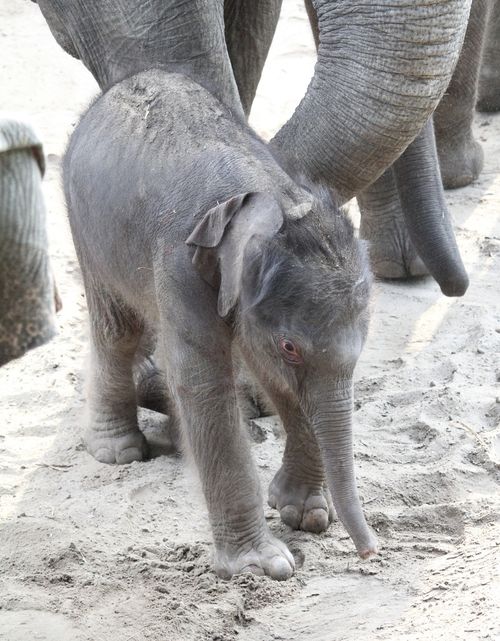 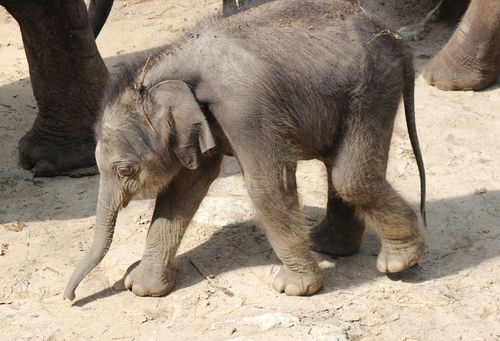 See more photos of the family after the fold. 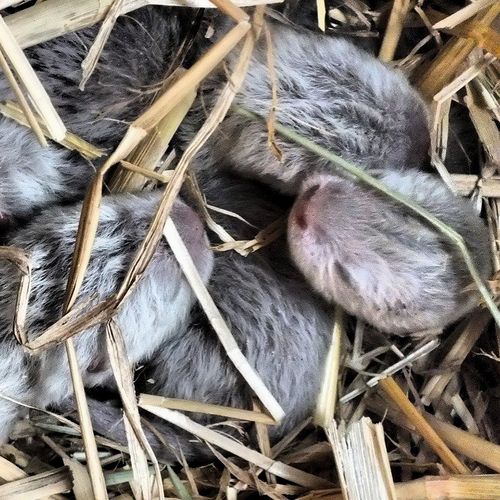 How many furry heads do you see in that Otter pup pile? There are four Asian Small-clawed Otters in all, born at Emmen Zoo in mid April. For the most part, keepers have left the babies alone to bond with mom and the other members of the family, who all pitch in, though  a vet check on May 21, it was determined that two were boys and two were girls! Newborn Otters are blind, deaf and totally dependent on their parents. They nurse for about seven weeks before they begin to start on solid foods. This is also about the time they open their eyes. Both Otter parents help to raise their pups, often assisted by previous offspring!

The smallest species of otter in the world, weighing less than 11 pounds (5 kg), they are considered Vulnerable by the IUCN, due to ongoing habitat loss, pollution, and hunting. They are found in fresh water in the wetlands, rivers and marshy areas along the coast in the Philippines, Vietnam, Thailand, India, southern China,Taiwan, Laos, Malaysia, Bangladesh, Indonesia, and  Burma. 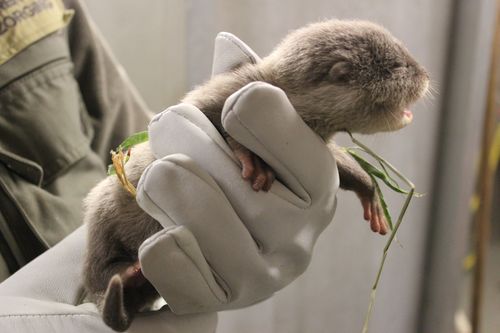 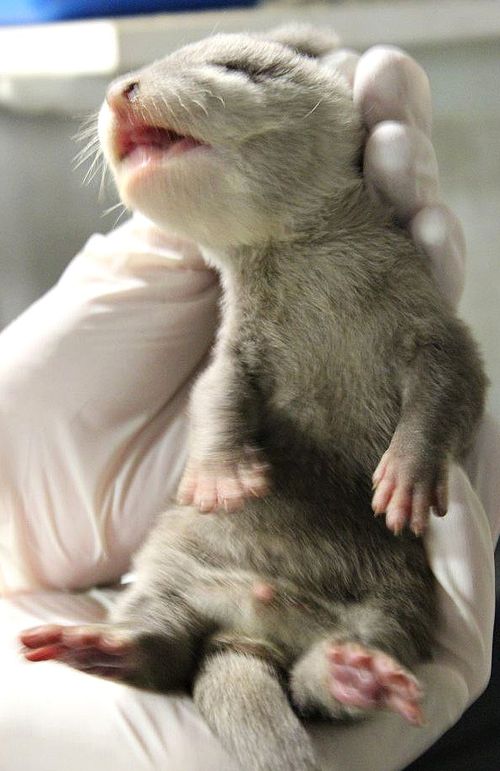 Asian Small-clawed Otters (Aonyx cinerea) are named as such because its claws, as you can see, do not grow past the pads of its partially webbed digits. This allows them to use their paws much like we use our hands, which helps when on a diet of feed on mollusks, crabs and shellfish. 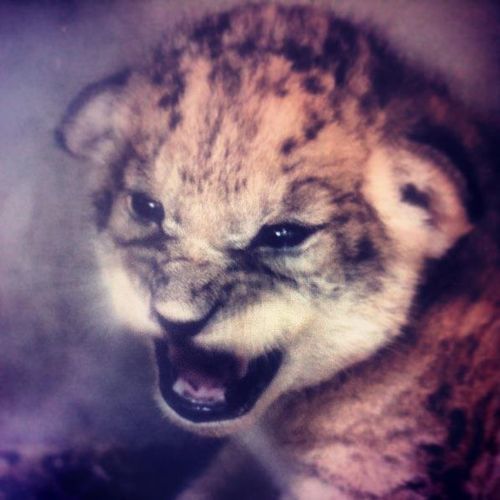 On Sunday, April 7, four Asiatic Lion cubs were born to parents Zulu, the father, and Tia, the mother, at the Emmen Zoo in Holland. The night house den had been cleared of other Lions so Tia could spend the critical first days and weeks bonding with her babies behind the scenes. Through the use of a live webcam, keepers have been able to keep a close eye on the little family, and have observed the four avidly nursing, and growing bigger and livelier by the day under Tia's excellent care. The sex of the cubs has not yet been determined.

The Asiatic Lion (Panthera leo persica), also known as the Indian Lion, is a lion subspecies. It is listed as Endangered by IUCN based on the small population size. These Lions once prowled from the Middle East to India, but now it is estimated that only 200 to 260 of them are left in the wild, as an isolated population found in India's Gujarat State. Once a royal hunting ground, today India's Gir Forest is a reserve where these Endangered Lions are heavily protected. 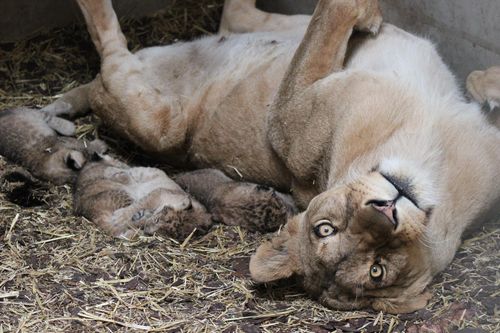 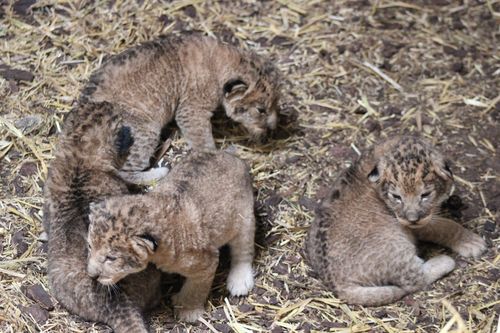 The zoo announced they are having a local contest, the winner of which will be able to have a live peek at the cubs. That will happen on April 25, but you can tune in right now to see them all via the zoo's live stream by clicking HERE.

See more pictures of mom and cubs after the fold: