Zooming To Catch Up With Marigold, The Baby Blue Duiker

We thought it was as good a time as any to catch up with her and report how she’d been doing over the last couple of months.

At about four-weeks-old, she was being given regular access to the outdoor yard of the Antelope Barn. She has been very curious, constantly investigating her new surroundings in the behind-the-scenes area under the close watch of mom.

Continue reading "Zooming To Catch Up With Marigold, The Baby Blue Duiker" »

August 9, 2022 (BALTIMORE, MD) – The Maryland Zoo in Baltimore is pleased to announce the birth of a female blue duiker (DIKE-er) named Marigold. She was born on July 24th to Flower (female) and Kuruka (male). 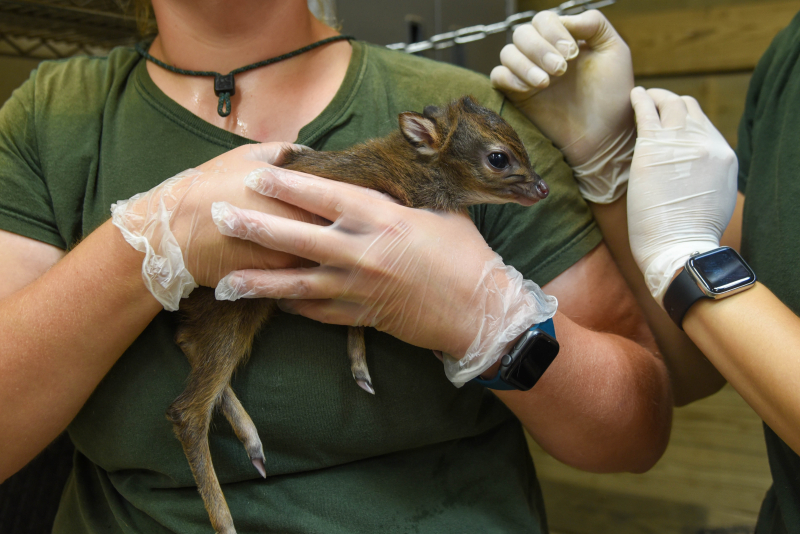 The birth was a result of a breeding recommendation from the Blue Duiker Species Survival Plan (SSP) coordinated by the Association of Zoos and Aquariums (AZA). The SSP provides breeding recommendations to maximize genetic diversity, with the goal of ensuring health of the individual animal, as well as the long-term survival of the species population to help save animals from extinction.

The Valencian park is the reference center in Europe for the “ex situ” conservation of the Natal red duiker. Included in the IUCN Red List, this almost unknown antelope can only be seen in Spain at BIOPARC. 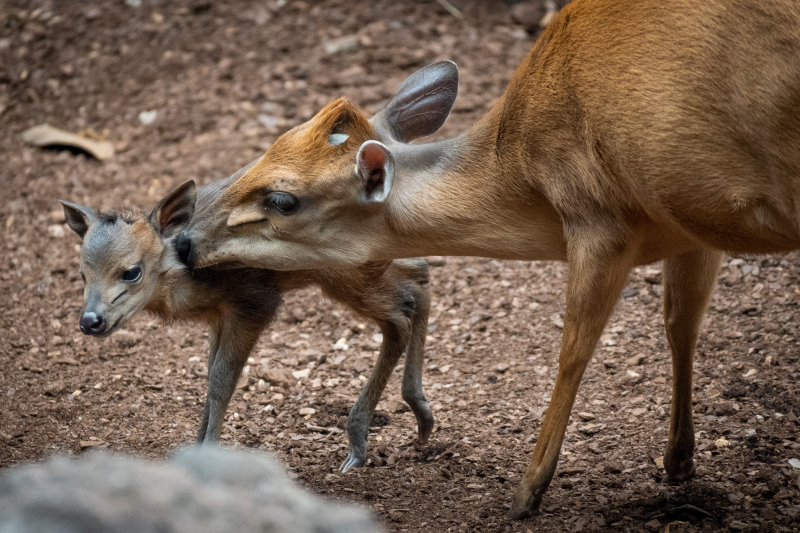 Tuesday, September 28, 2021.- The miracle of life has once again surprised the visitors of BIOPARC who have been excited to attend the delivery of a very little-known African antelope, the red duiker of Natal. It all happened last Friday afternoon, when wild nature once again showed its most tender and hopeful face and many people felt on a trip to the distant African jungles to experience a “live documentary”. The diligent mother's demeanor was impressive when, following her instinct not to arouse the interest of potential predators, she ate the placenta. It also stimulated the young, facilitated lactation and was protective. It was also moving to see the goat's first steps and the curiosity it aroused among the rest of the animals that inhabit the same enclosure. 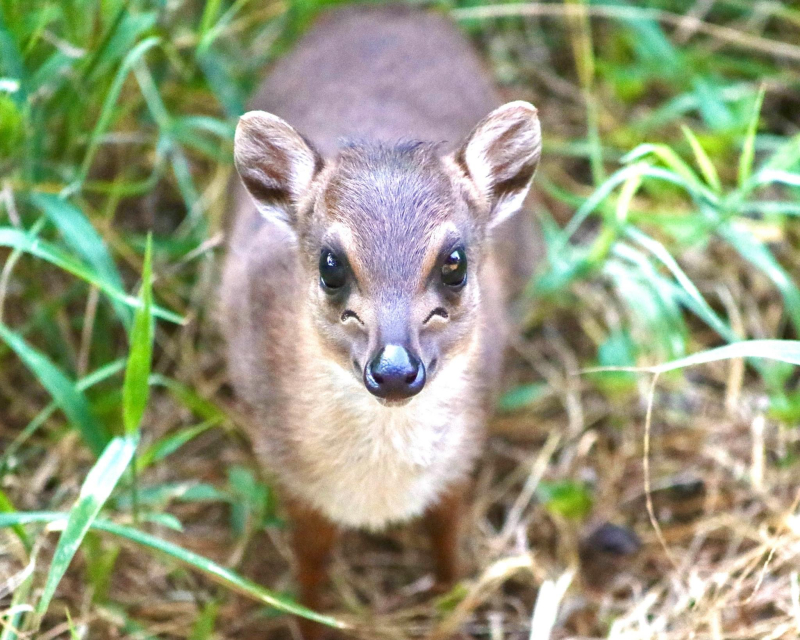 Blue duikers are a small species of forest-dwelling antelopes found in central, eastern, and southern Africa. The calf is the fourth born to parents, Stumpy and Kate, who previously had calves in 2014, 2015, and 2017.

“We are excited to announce this addition to our zoo family,” said President & CEO San Antonio Zoo Tim Morrow. “This has already been a fantastic year as we have welcomed many new births throughout the zoo, and this is just one more reason to celebrate. I am very proud of our Animal Care Specialists and veterinary teams for their hard work and dedication in securing a future for wildlife.”

Blue duikers weigh up to 20 pounds as full-grown adults. The blue is named for the color their fur appears in the dense forest shade, and duiker is an Afrikaans word for “diving buck,” which describes its behavior in the forest as it dives into bush and brush undergrowth. Blue duikers are on the Species Survival Plan and have a conservation status listed as Least Concern.

San Antonio Zoo has a long history of working to preserve species worldwide. The zoo’s Center for Conservation and Research seeks to fulfill the zoo’s Mission Statement through various approaches, including fieldwork and captive husbandry of rare and threatened species. The scope of efforts includes projects on three continents, transnational research, and projects throughout the United States, with particular emphasis on Texas. For more information on the zoo’s conservation programs, visit https://sazoo.org/zoo-conservation-efforts/.

THIS LITTLE GUY IS A BIG DEAL

Dallas Zoo is thrilled to share that they have welcomed a second blue duiker calf! This male calf was born on August 15 to mom Daisy and dad Viazi. He is 0.88 pounds of pure cuteness. 💚

With only about 35 individuals living in US zoos accredited by The Association of Zoos and Aquariums, each blue duiker birth is a major win for the species! Dallas Zoo currently working hard behind the scenes to create an extensive blue duiker breeding program to bolster the genetic diversity of this population and ensure their long-term survival. 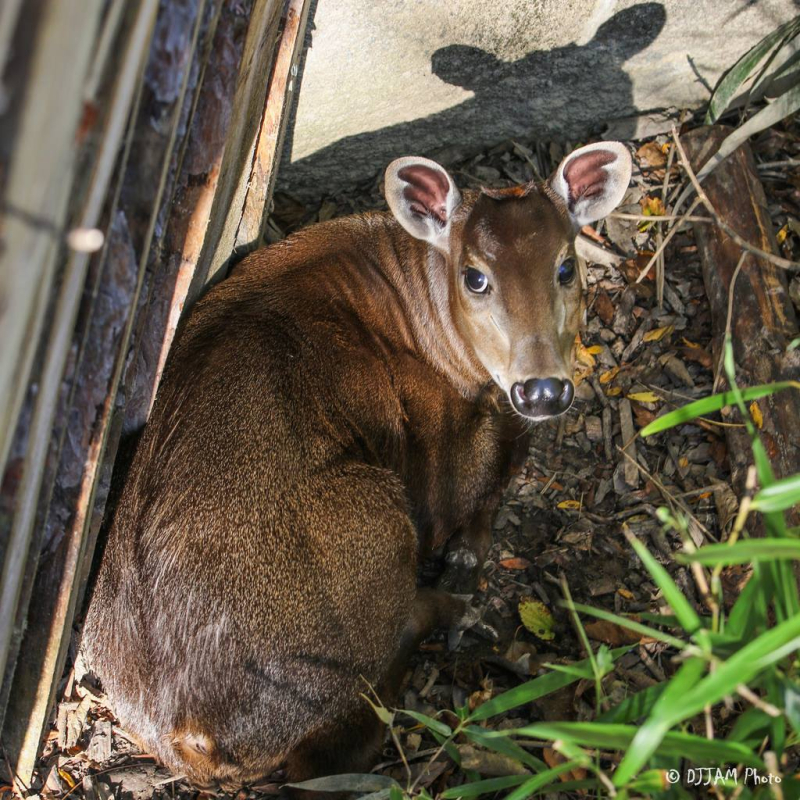 The Yellow-backed Duiker calf at Cincinnati Zoo & Botanical Garden is simply a “wondrous-marvel”, and that is just what her name, Shani, means in Swahili.

Shani was born August 22 and has been spending quality time bonding with her parents. The small family unit is a preference for the duiker.

Although her species name suggests otherwise, Shani’s characteristic yellow stripe won’t appear on her back until she is about six-months-old. For now, her coloring is suitable for hiding in the shelter of forest floors and brush. 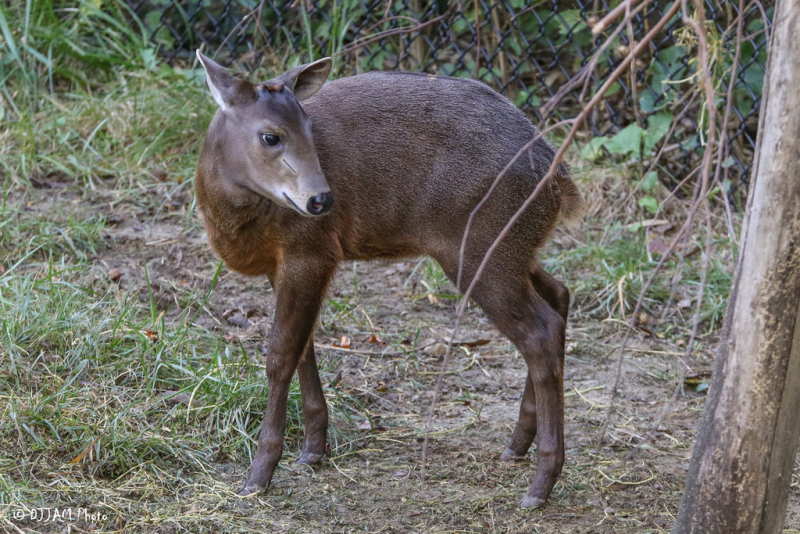 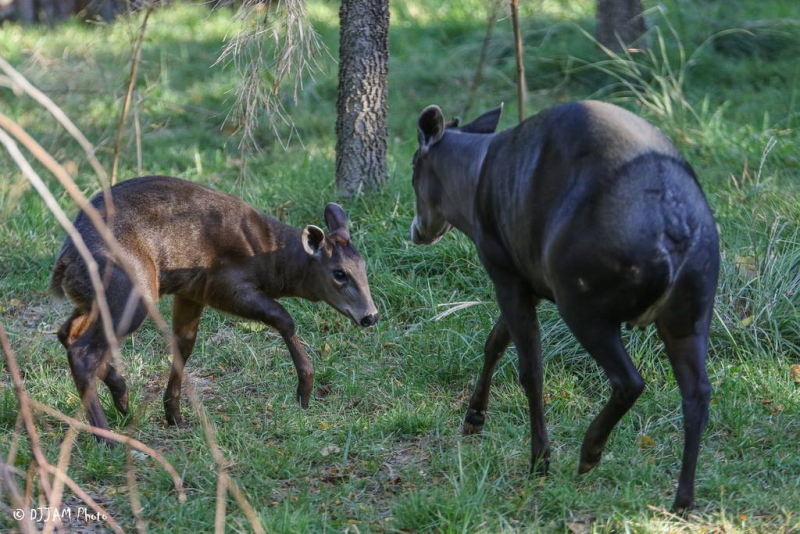 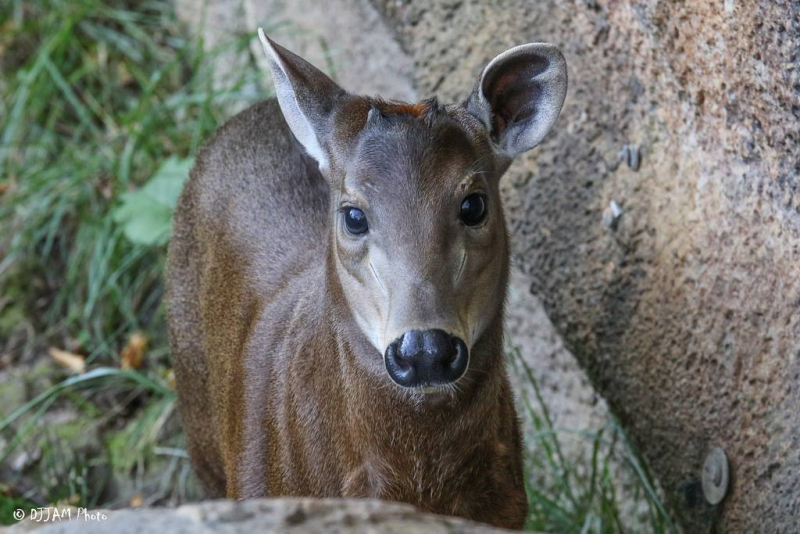 The Yellow-backed Duiker (Cephalophus silvicultor) is a forest dwelling antelope in the order Artiodactyla, from the family Bovidae. They are the most widely distributed of all the duikers, and they are found mainly in Central and Western Africa, ranging from Senegal to Western Uganda with a possible few in Gambia. Their range also extends southward into Ruanda, Burunidi, Zaire, and most of Zambia.

Yellow-backed Duikers have a convex body shape, standing taller at the rump than the shoulders. They have very short horns, which are cylindrical and are ribbed at the base. Yellow-backed Duikers get their name from the characteristic patch of yellow hairs on their rump, which stand when the animal becomes alarmed or feels threatened. They weigh-in at about 60–80 kg, making it the largest of its genus. It has a large mouth, throat and jaw musculature.

Yellow-backed Duikers are mainly forest dwelling and live in semi-deciduous forests, rainforests, riparian forests, and montane forests. However, they can also be found in open bush, isolated forest islands, and clearings on the savanna. Their convex body shape is well suited for forest living. Also known as “little divers,” duikers dive into thick undergrowth to hide from predators; hence, the name duiker which means "diver" in Afrikaans. 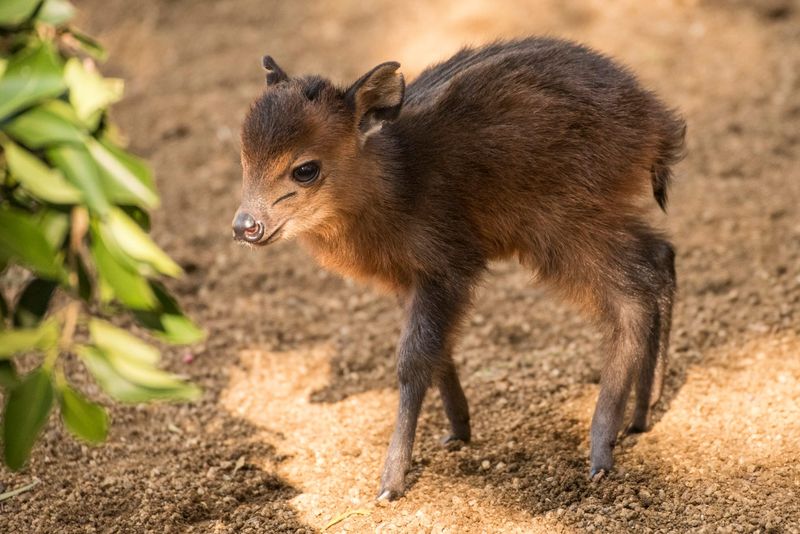 A Red-flanked Duiker was born the end of January, at the Los Angeles Zoo and Botanical Gardens. The diminutive bovid was recently photographed enjoying the California sun.

The Red-flanked Duiker (Cephalophus rufilatus) is a species of small antelope found in western and central Africa. They grow to almost 15 in (35 cm) in height and weigh up to 31 lb (14 kg). Their coats are russet, with greyish-black legs and backs, and white underbellies.

Red-flanked Duiker feed on leaves, fallen fruits, seeds and flowers, and sometimes twigs and shoots. The adults are territorial, living in savannah and lightly wooded habitats.

The females usually produce a single offspring each year. Breeding and births tend to occur year round as young animals have been seen during the wet and dry season. Gestation is about five-and-a-half months. Duikers are considered precocial but are concealed in vegetation by their mother for several weeks after birth. They are sexually mature when they are about one year old, but probably do not breed until later. Lifespan in captivity is up to 10 years.

Adult males and females are, in general, similar in appearance, but males have short backward-pointing horns up to 9 cm (3.5 in) long. Females are often hornless, or may have shorter horns. Both males and females have large preorbital glands on their snout in front of their eyes, which form bulges in their cheeks. These are common to all members of the genus Cephalophus but they are larger in the Red-flanked Duiker than in other species.

The Red-flanked Duiker is an adaptable species. The removal of trees by logging and the conversion of its natural habitat into more open savannah and farmland have allowed it to increase its range. It is fairly common in the areas in which it is found, though numbers are decreasing, in general, due to severe hunting pressure.

The Red-flanked Duiker was one of the four most frequent species of bushmeat on sale in the Republic of Guinea, along with Maxwell's Duiker (Cephalophus maxwelli), the Greater Cane Rat (Thryonomys swinderianus), and the Bushbuck (Tragelaphus scriptus).

However, the Red-flanked Duiker occurs in a number of reserves and protected areas where it is less liable to be killed for meat, and it is currently classified as “Least Concern” on the International Union for Conservation of Nature’s Red List of Threatened Species. 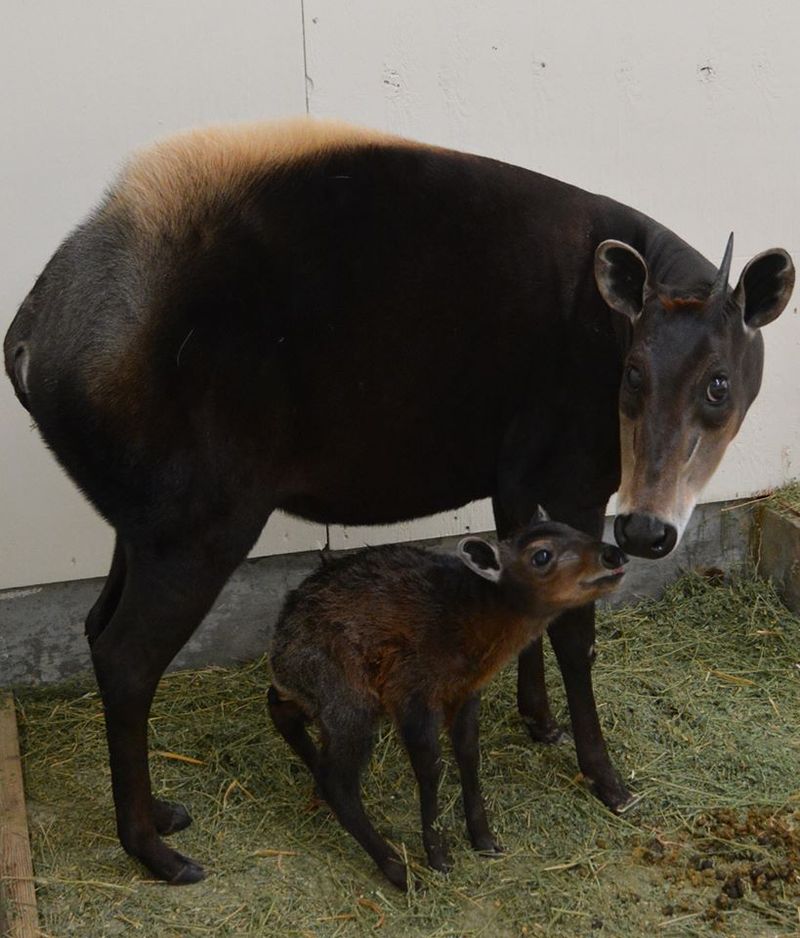 There is more news to report from the Virginia Zoo. A Yellow-backed Duiker was born there last week! The female calf was welcomed by mother, Dot, and father, Dash, and weighed 11.4 pounds at birth.

Dot arrived at the Virginia Zoo in early 2013 (via the Houston Zoo) and recently turned 5 years old. Dash is her younger-man at 2 years old, and he came from the Metro Richmond Zoo in 2014.

So far, Zoo staff have observed Dot nursing, cleaning and caring for her baby… all evidence she’s doing a great job. The family is currently being kept indoors, which gives them time to establish the needed familial bonds; and it allows the baby to stay warm in these cold winter days. 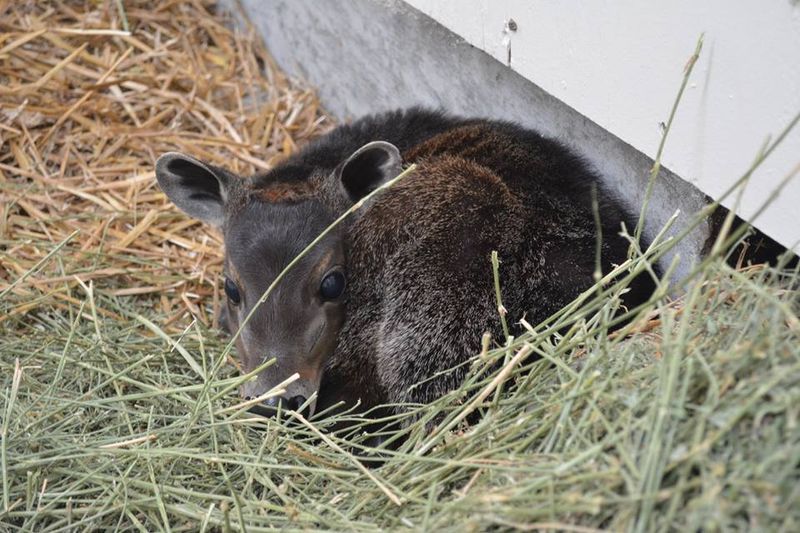 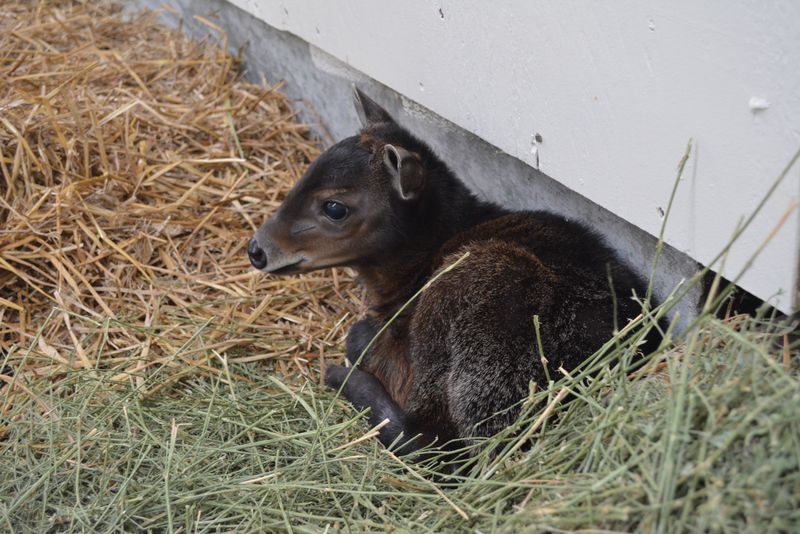 Yellow-backed Duikers are the largest of all the duikers (primitive antelope which diverged early in bovid history). Both males and females have short cylindrical horns, which are ribbed at the base, and reddish-brown hair sits between the horns.

The species is listed as “Least Concern” on the IUCN Red List of Threatened Species, with a total population estimated at more than 150,000. According to the IUCN: “In much of its range, especially outside protected areas, it has been reduced to low numbers or eliminated by forest destruction, and encroachment of human settlements, coupled with uncontrolled hunting for bushmeat. The species was formerly subject to strict taboos that once protected it in some parts of its range, and it is still considered a non-preferred game species in some areas; however, many of these taboos have broken down.” 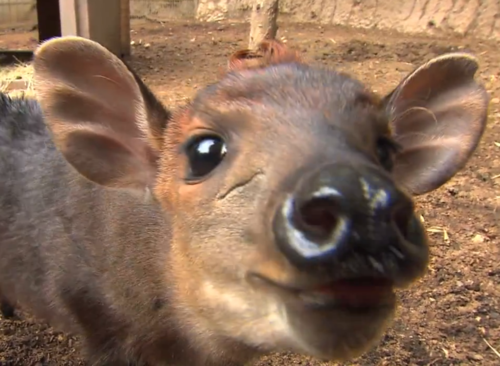 Meet Rashidi, the nosy new member of the Black Duiker family at the San Diego Zoo. Born in mid December, his name means "rightly guided" in Afrikaans. He nursed for the first few weeks, forming a close bond with his mother, Robin. He has now moved on to solid foods and is growing as he should, starting from about 5 pounds at birth to weighing 17 pounds now, at a little over 7 weeks old. He will continue until he reaches between 25 to 55 pounds at full maturity.

This is the second offspring for parents Robin and Luke. Kodi, their first baby, was the first Duiker to be born at the San Diego Zoo. The species is categorized as Near Threatened in the wild, mainly due to natural predators and agricultural burn off, making these babies significant for the genetics of the species. Black Duikers are native to the continent of Africa and get their name from the Afrikaans word duikerbok, which means "diving buck," because when frightened they tend to dive into bushes to hide.

Zoo staff captured this kiss from Mom to her baby just the other morning! 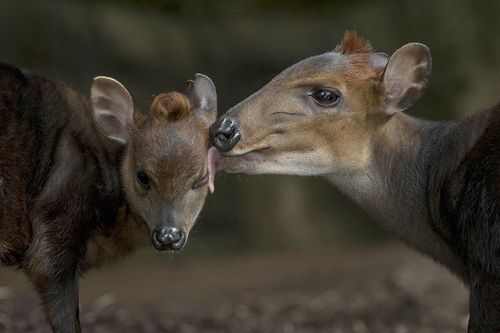 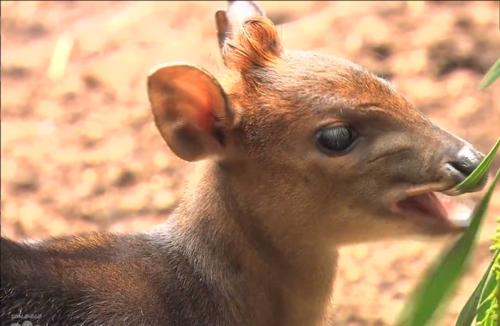 Click the video below to see the little one enjoying his favorite snack - acacia leaves - and nosing the camera, while in the habitat that the Duiker family shares with two Okapis.

This Blue Duiker Baby Has a Red Rudolph Nose! 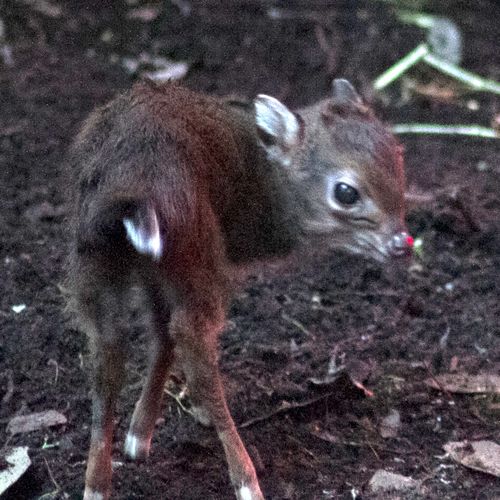 It's actually just the lighting in the photograph making her nose shine so bright. A tiny female Blue Duiker calf was born Dec. 8 at Fresno Chaffee Zoo. The calf weighs 1lb and stands 5 inches tall at her withers. Duikers are among the smallest of Antelope species and generally weigh only 20 to 26 pounds when fully grown. 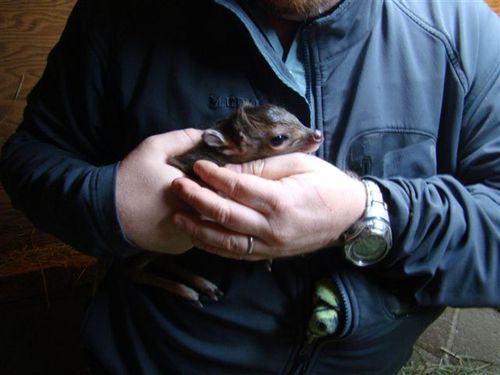 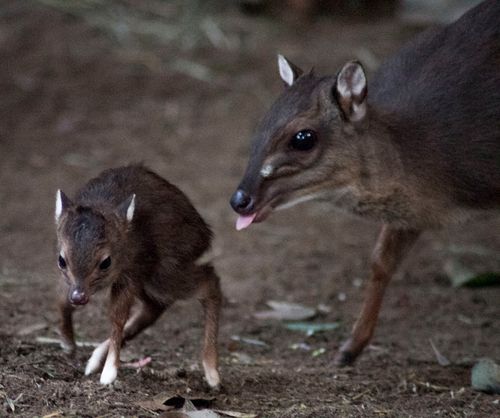 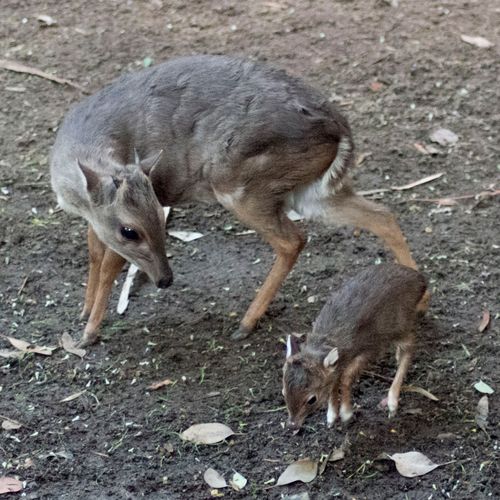 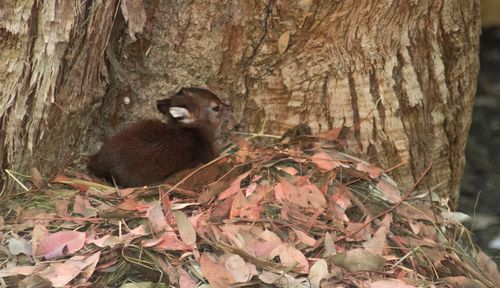 Duikers are found throughout sub-Saharan Africa in wetlands, rainforests and timber-heavy regions. Although they browse on grass, leaves, shrubs and trees, Duikers are classified as frugivores because the main component of their diet is fruit. They have also been observed eating carrion and insects, which isn't common among most Antelope but provides protein to their diet.