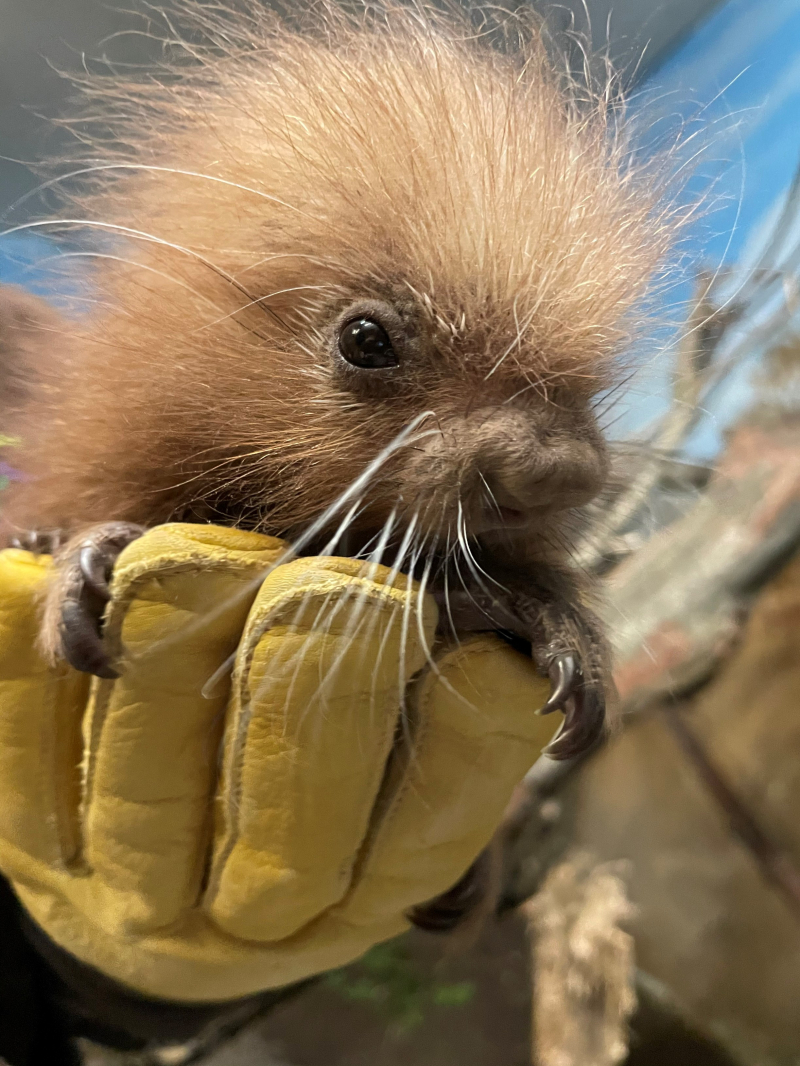 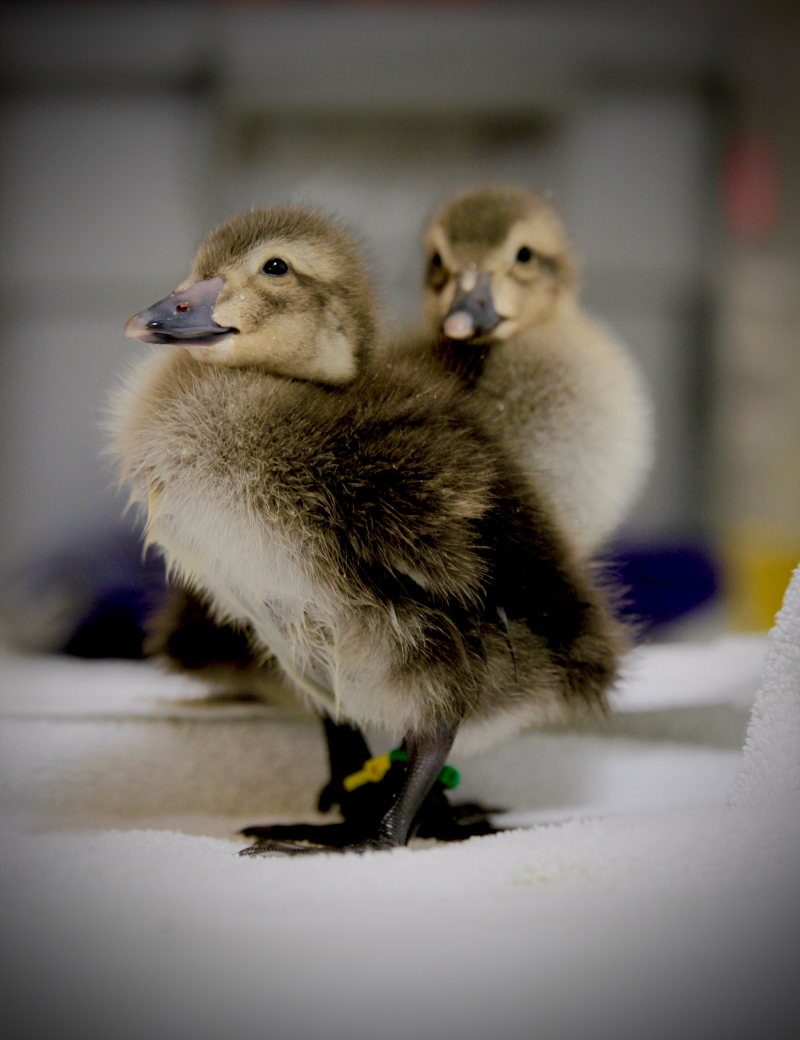 The Alaska SeaLife Center had some recent hatches in their aviary. A Horned Puffling and two King Eider Ducklings emerged this summer.

The King Eider Ducklings are said to be growing fast. They are currently being fed bloodworms and a mixture of waterfowl feed. Keepers say they swim efficiently and love snuggling each other.

The Horned Puffling hatched to parents, Nemo and Clay. Staff members report that the little bird is doing well, but keepers are feeding it a supplement of sand eels, just to make sure it is getting enough food. 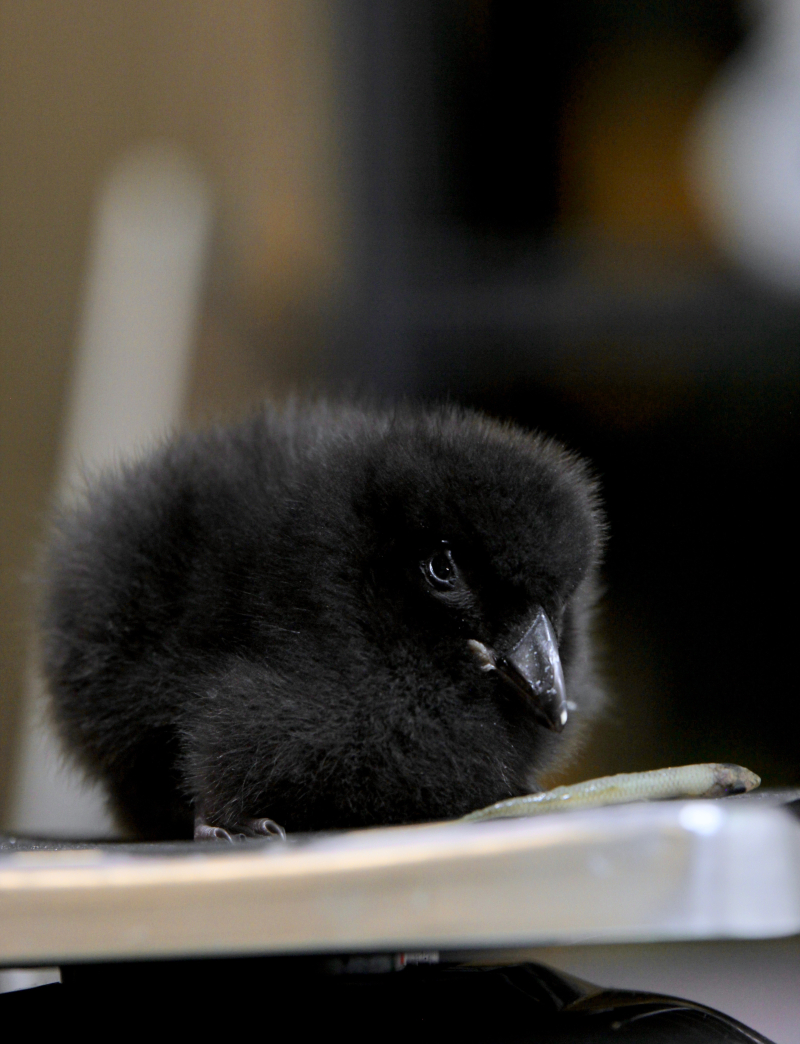 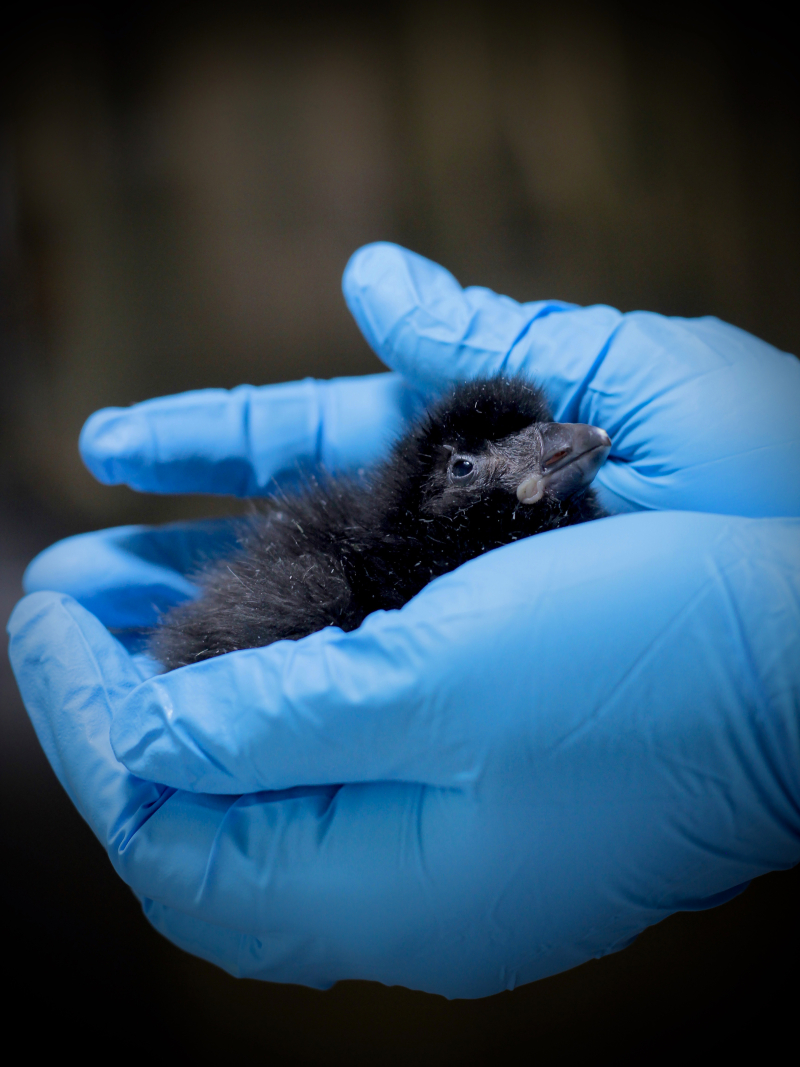 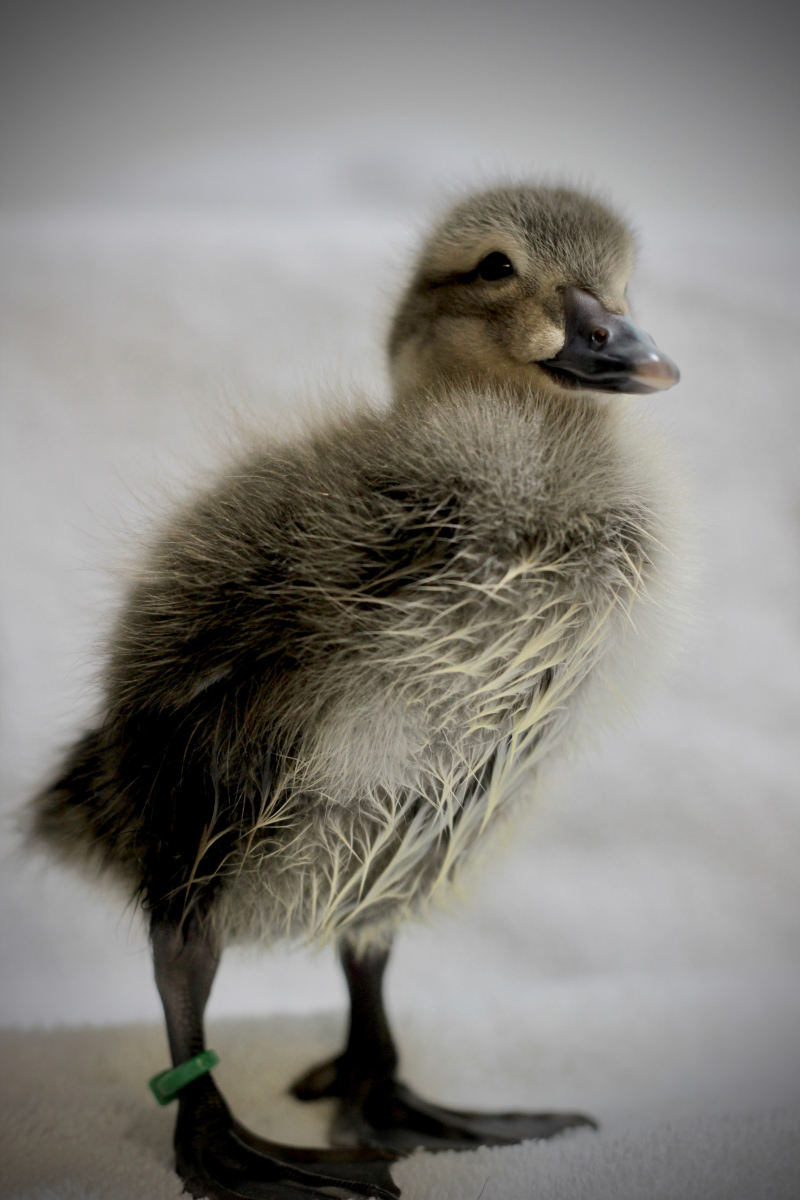 The Horned Puffin (Fratercula corniculata) is an auk, similar in appearance to the Atlantic Puffin. It is a pelagic seabird that feeds primarily by diving for fish. It nests in colonies, often with other auks.

They are currently classified as “Least Concern” on the IUCN Red List. However, the population of the species has declined due to the introduction of rats onto some islands used for nesting.

The King Eider (Somateria spectabilis) is a large sea duck that breeds along Northern Hemisphere Arctic coasts of northeast Europe, North America and Asia. The birds spend most of the year in coastal marine ecosystems at high latitudes, and migrate to Arctic tundra to breed in June and July.

Due to its large population and vast range, the King Eider is listed as “Least Concern” by the International Union for the Conservation of Nature. Predators include: Glaucous Gull, Common Raven, Parasitic Jaeger and the Arctic Fox. 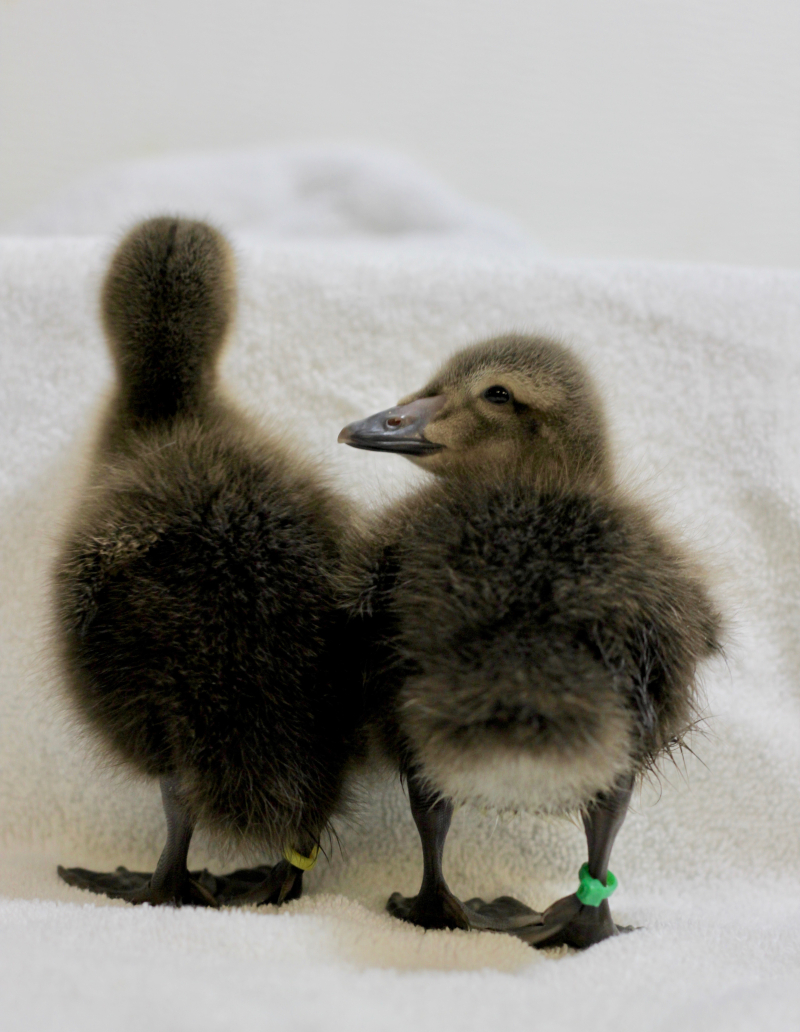 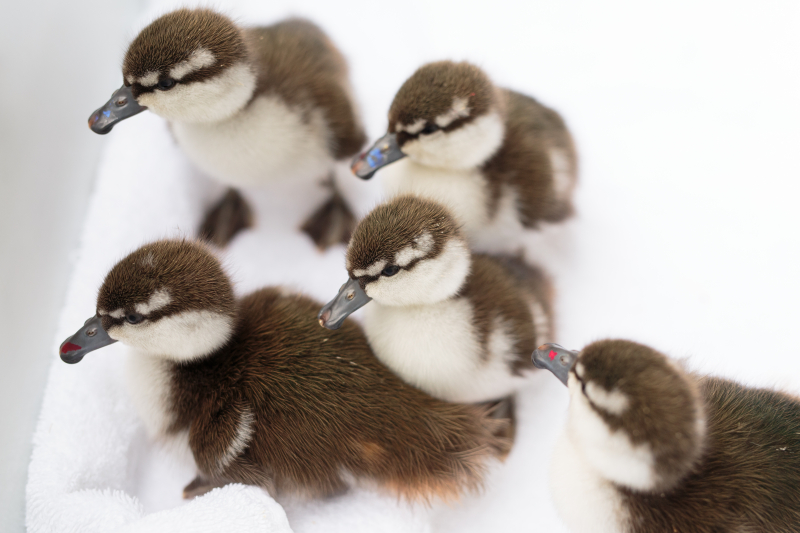 A paddling of Whio Ducks has hatched at Auckland Zoo! These special ducklings are the first Whio born at the New Zealand facility in five years, and as part of their breed-for-release programme, they are destined for life at a beautiful North Island river.

Over the next eight weeks, as they continue to grow, they will eventually head to a duckling ‘boot-camp’ at a Department of Conservation facility in Turangi. There they will build up their muscles and learn to fly, which will prepare them for a new life in the wild. In 2002 Auckland Zoo successfully released eleven Whio chicks. 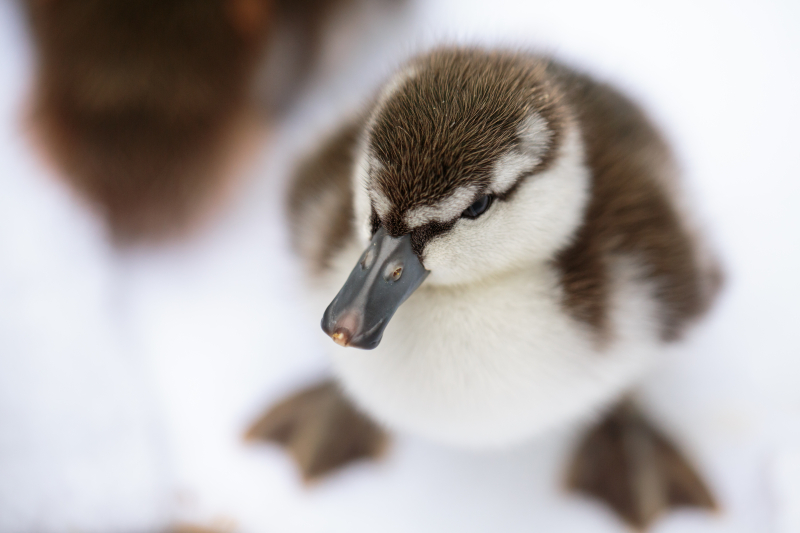 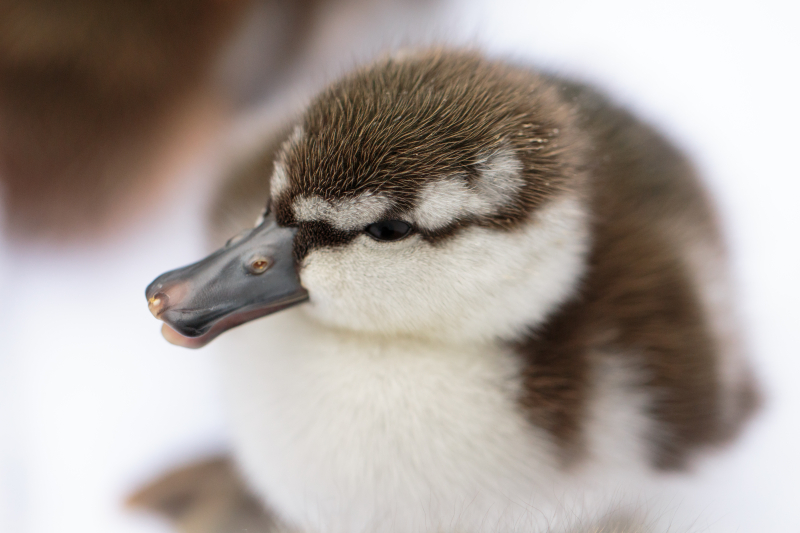 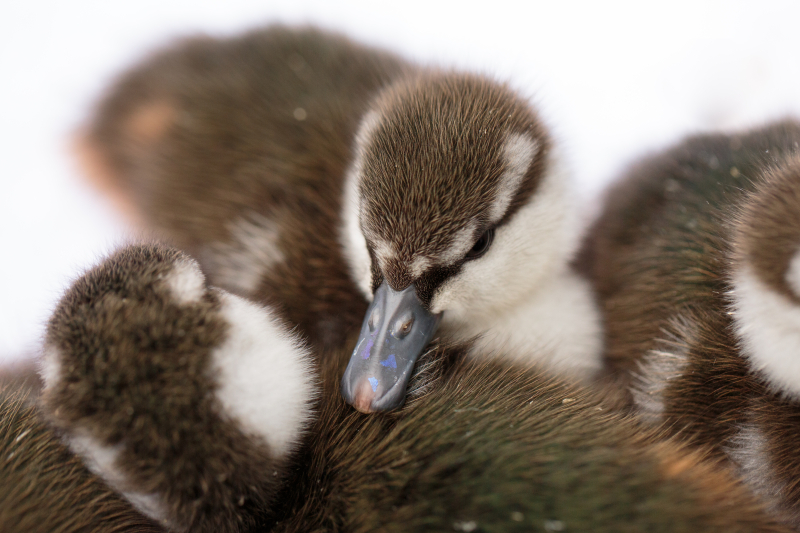 This iconic native New Zealand bird features prominently on the countries $10 currency note, and it is nationally endangered. They require clean, fast flowing streams to swim in, and because of this, are a key indicator of the health of native rivers.

Once found in the North and South Island, of New Zealand, their numbers have reduced greatly due to pollution and predation.

Whio releases into the wild are a great example of the work that Auckland Zoo does behind-the-scenes with partners like DOC Whio Forever, in an effort to conserve native wildlife.

Although these new ducklings are off display, adult Whio can be seen by Zoo visitors swimming in the streams in The High Country aviary in Te Wao Nui. 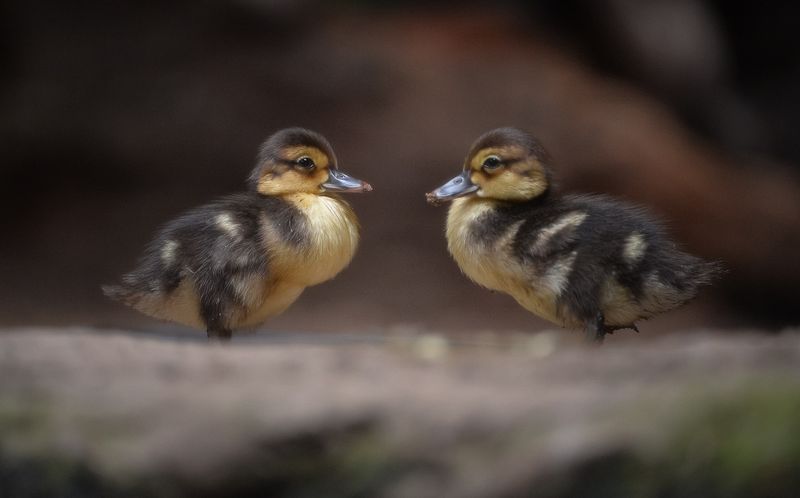 With fewer than 250 remaining in the wild, hopes are high that a pair of rare white-winged ducks hatched at the Chester Zoo can boost this endangered species. 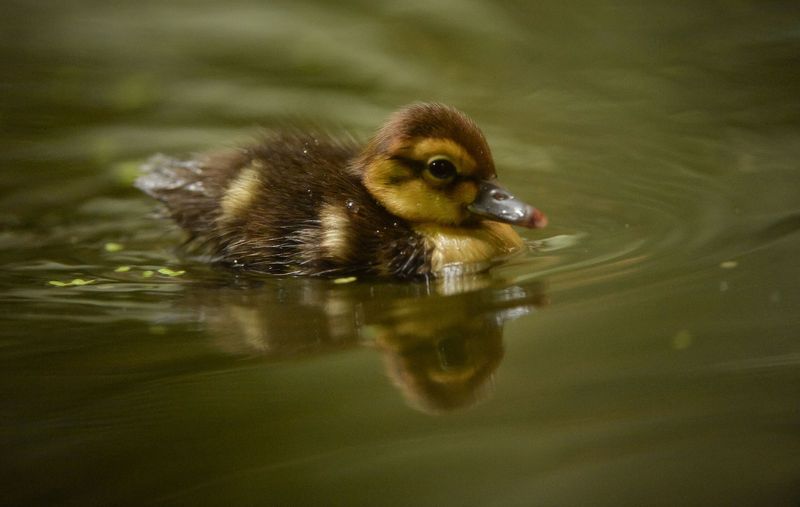 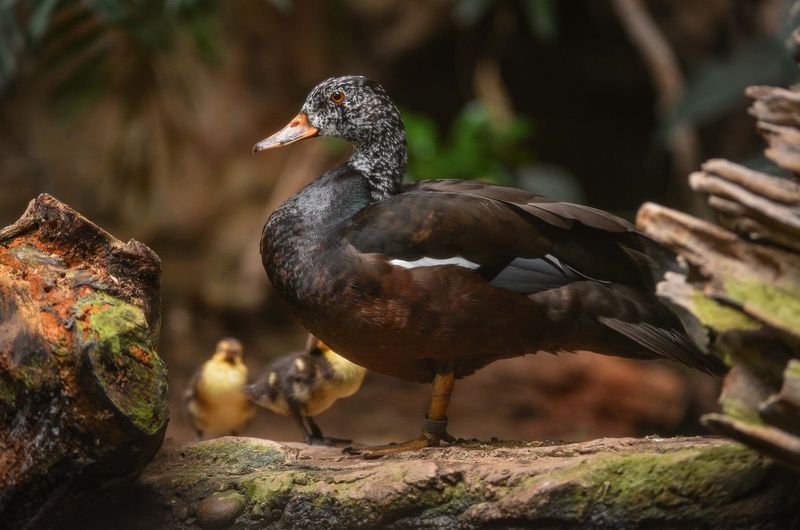 The duo can be seen swimming in their exhibit pond, but zoo staff are keeping a close watch on the ducklings. Curator of Birds Andrew Owen said, “Our two new white-winged ducklings are very important birds given that their numbers are extremely low in the wild. Our dedicated bird team will be keeping a very close eye on them to make sure they make it through to adulthood."

White-winged ducks are on the brink of extinction, with their wetland and forest habitats significantly destroyed by human activity.  Only a few populations remain along riverbanks in India and Indonesia.  In some locations, such as Java, Thailand, and Malaysia, white-winged ducks have not been seen for many years.  They are listed as Endangered by the International Union for Conservation of Nature.

Chester Zoo participates in the European breeding program, which builds an insurance population in zoos should the wild population be lost completely.  In addition, zoos are working in Southeast Asia to preserve habitats, which will benefit this and many other species. 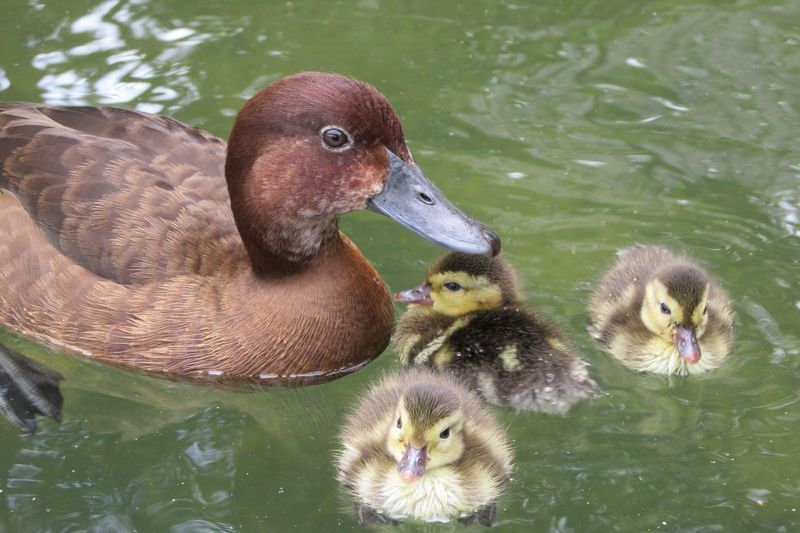 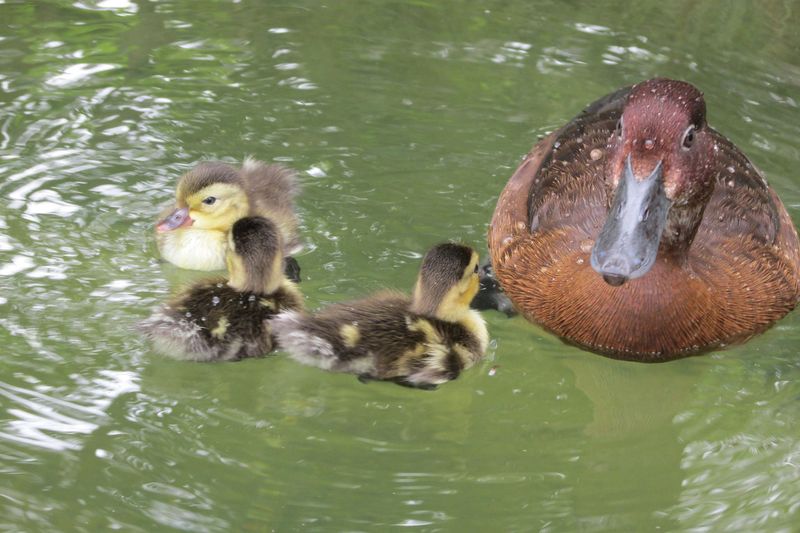 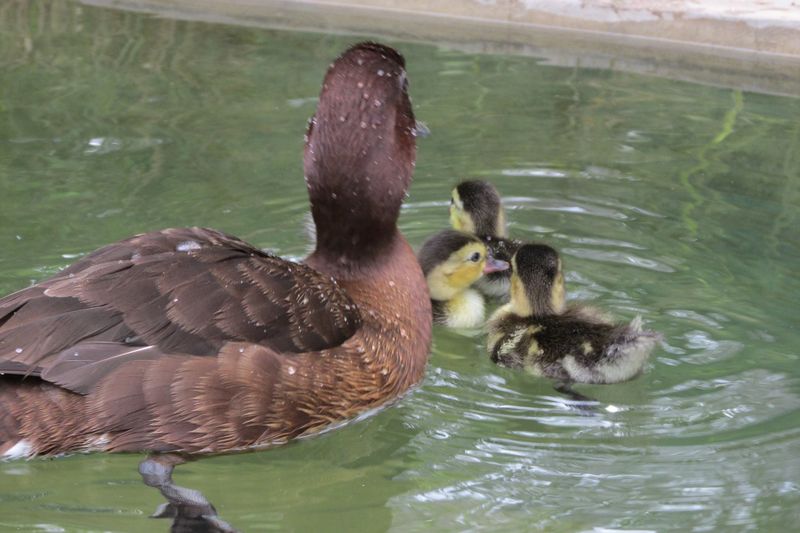 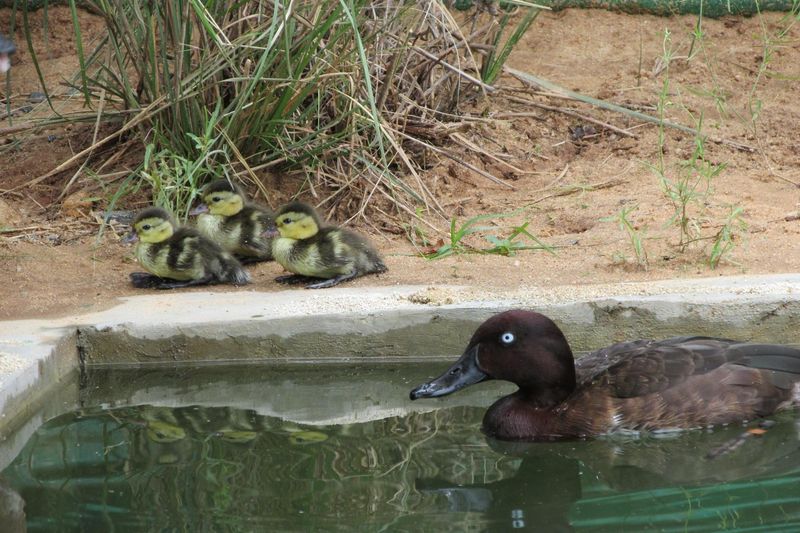 These three Madagascar Pochard ducklings are special in several ways. They are considered a 'Lazarus species' (once declared extinct, but thankfully rediscovered), with a wild population of under 30 individuals, literally 'hanging on' in an environment where their young almost never survive.

They are also the first hatchlings to be parent-reared at Durrell's Antsohihy facility. This means that if they survive (ducklings are notoriously delicate), they could go back to wetlands that teams in Madagascar are working with local communities to restore.

The ducklings parents have been carefully selected using genetic information provided by students from Cardiff University who have been contributing valuable research to the all-out attempt (from Durrell, Wildfowl & Wetlands Trust (WWT) and the Malagasy Government) to save the Madagascar Pochard from extinction.

For more information on the project, please see their website: www.durrell.org/wildlife/species-index/madagascar-pochard 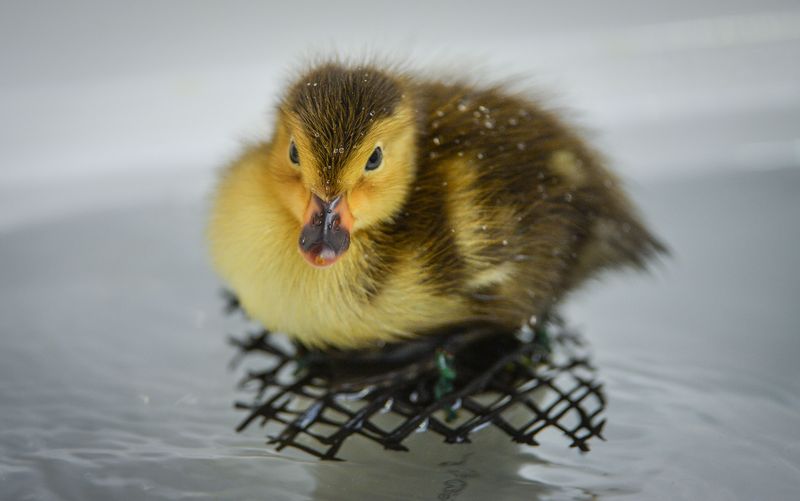 A rare, endangered species of Asian duck, known as Baer’s Pochard, has been successfully bred at Chester Zoo in the UK. 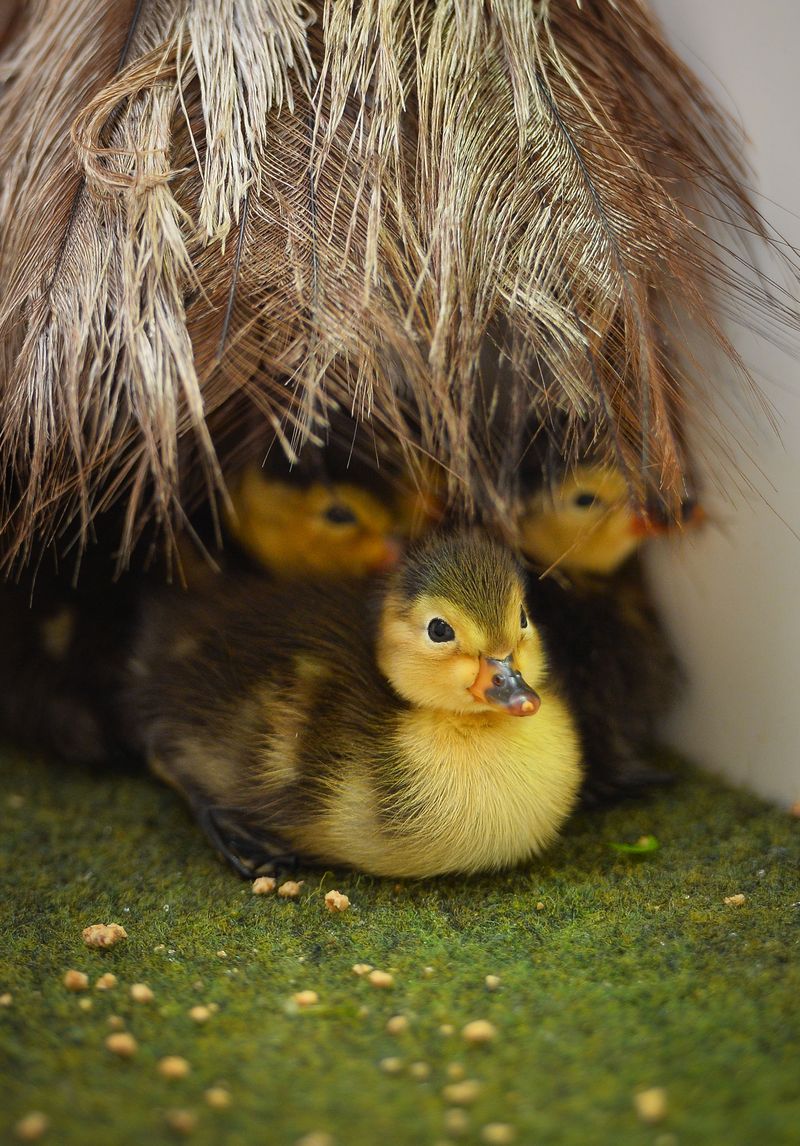 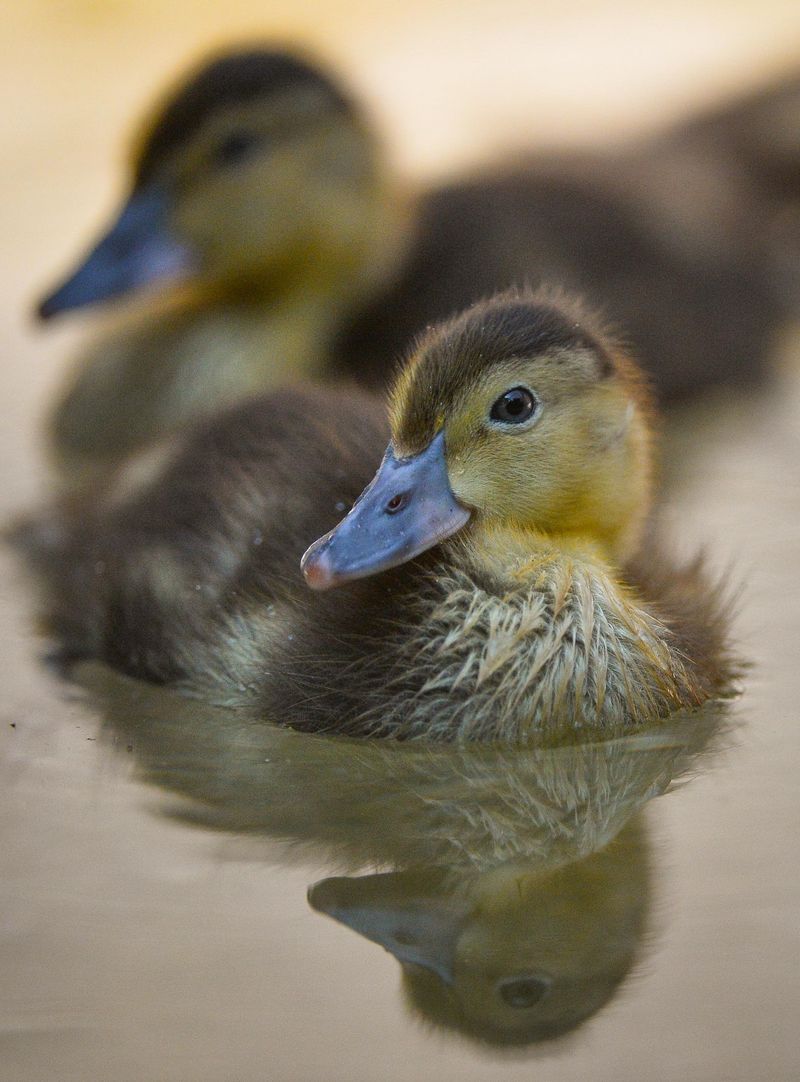 Thirty Baer’s Pochard ducklings have hatched at the zoo, and unfortunately, according to estimates, there are not much more than that living in the wild.

The species is currently classified as “Critically Endangered” on the IUCN Red List, and the population is steadily decreasing in the wild. Native to eastern Asia, it breeds in southeast Russia and northeast China, migrating in winter to southern China, Vietnam, Japan, and India. It is now absent or occurs in extremely reduced numbers over the majority of its former breeding and wintering grounds and is common nowhere. It is thought that hunting and wetland destruction are the key reasons for its decline. Experts fear just a few individuals are now left, and the species could soon vanish altogether.

Curator of Birds, Andrew Owen said, “We’re perilously close to losing this species in the wild, and that’s why our recent hatchlings are very, very important, indeed. They’re, without doubt, some of the rarest ducks in the world. Thirty Baer’s Pochards have been bred here this breeding season and whilst it’s good news in the sense that it’s a record for us, rather frighteningly, there may only be similar numbers left in the wild.”

Chester Zoo is one of just a handful of institutions in the world, and the only zoo in the UK, that is working with the highly threatened species and hopes to play a vital role in their long-term survival.

Mr. Owen added, “Our very talented bird team has given all our ducklings a helping hand, rearing them under close watch to make sure they make it through to adulthood. With a species that’s so rare, it’s imperative that we get as many through to that stage as possible. Hopefully these little ducklings will start to rear their own young next year and, beyond that, a European-wide breeding program in zoos and bird parks could be what saves the species from extinction.”

The Owl and the Runner Duck: Best Pals Take a Nap 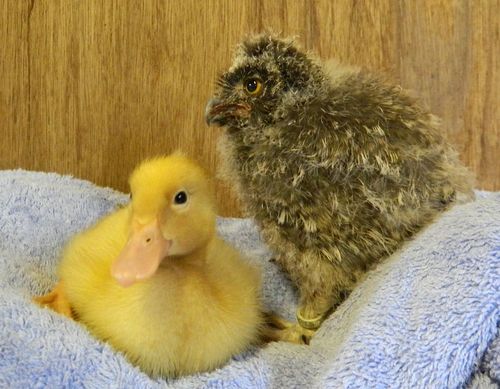 Friendship comes in many forms, and at times can be forged with the most unlikely of companions. This is often true in the animal world, and was proven this week at Kirkleatham Owl Center in Redcar, North East England. Meet ''Chop-suey'' the baby White-crested Runner Duck and ''Larch'' a tiny baby Long-eared Owl. A very odd couple, but the best of pals!

The two three-week-old babies met at the center, and are now inseparable. Initially there were  a dozen duck eggs in the Center's incubator, but only one hatched, producing little Chop-suey. Although the chick was content with human company, he was not happy being left alone. Larch the Owl had been by himself there so staff put the two together and they instantly snuggled up and fell asleep! 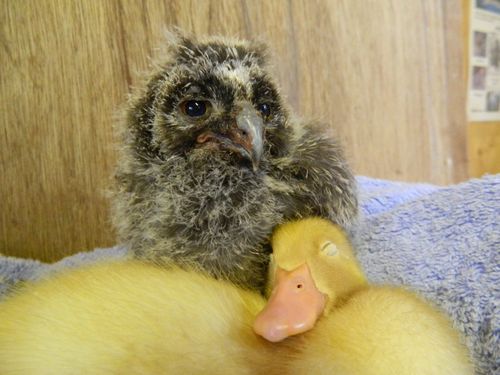 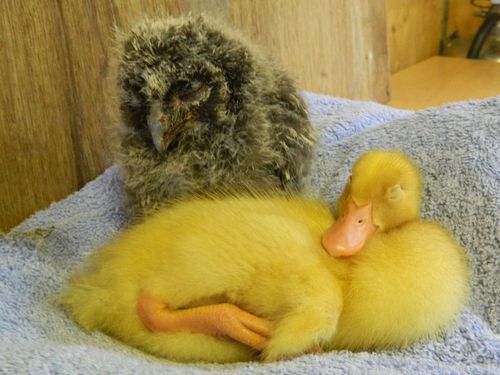 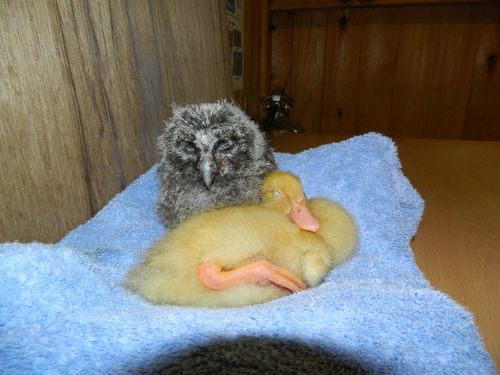 They won't be able stay together for much longer due to their differing needs as they develop," said a spokesperson at the Center, "but while they are still very small we are more than happy for them to enjoy their time together."

Long Eared Owls are a very secretive species, but being hand reared Larch is confident around people, especially with best friend Chop-suey at his side. It is hoped that both will take part in the center's flying displays, although probably not together. Larch will be a fast flyer, while ''Chop Suey'' being a runner Duck is more of a ground bird.

Watch as these two settle in for a snooze on the video below:

Although adult Meller's Ducks look very similar to the common Mallard, they are a distinct, and highly endangered species native only to Madagascar. Keepers at the Louisville Zoo were startled to discover two eggs in the Meller's Duck enclosure during a routine cleaning in May. After 26 days in the incubator, two tiny ducklings were born and are doing well. 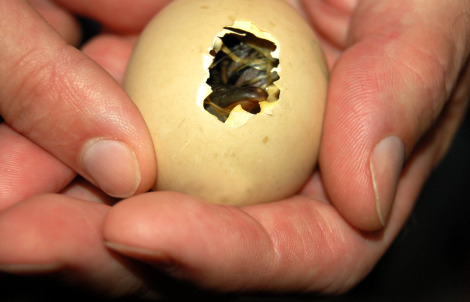 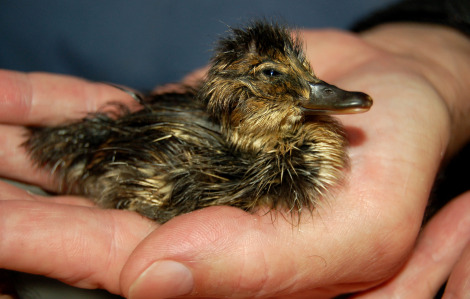