Zoo Dresden’s Red Pandas have been active this winter. Mom Louanne has been spending time introducing her new cubs to the flora and fauna of their outdoor exhibit, and the entire family has been enjoying the chill of winter, while protected by their beautiful red coats.

The adorable cubs were born July 3 to Louanne and her partner, Manchu. Although yet-to-be-named, the two males and one female are fast becoming zoo favorites.

According to Zoo Dresden, visitors will have their best chance at spotting the Red Pandas around noon, while exploring with their mother.

New father, Manchu, was born at Zoo Madrid in 2008 and has been a resident of Zoo Dresden since 2009. Proud mother, Louanne was born in 2009 at Zoo Amiens in France. She became a resident of Dresden in 2015. According to keepers, the two Red Pandas have been living together since last June, and it worked out right away that their match was successful. "The birth of [the] young animals is something special and a real rarity," says Zoological Director Dr. Wolfgang Ludwig. 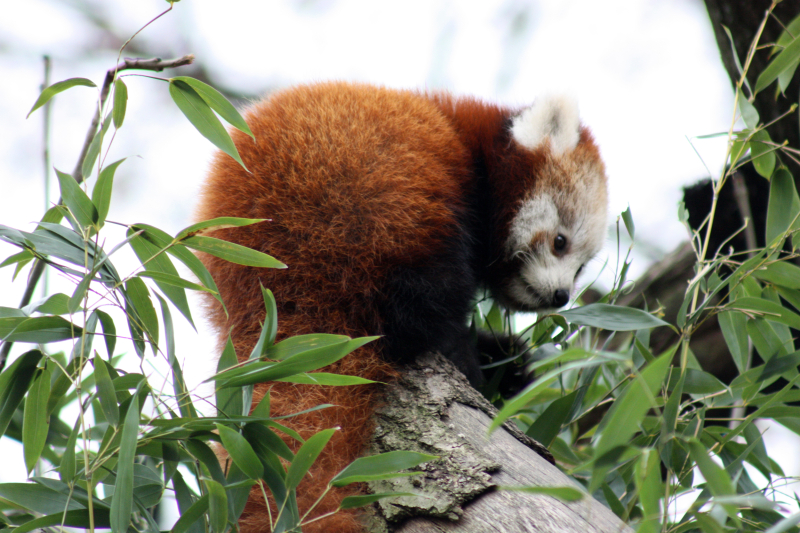 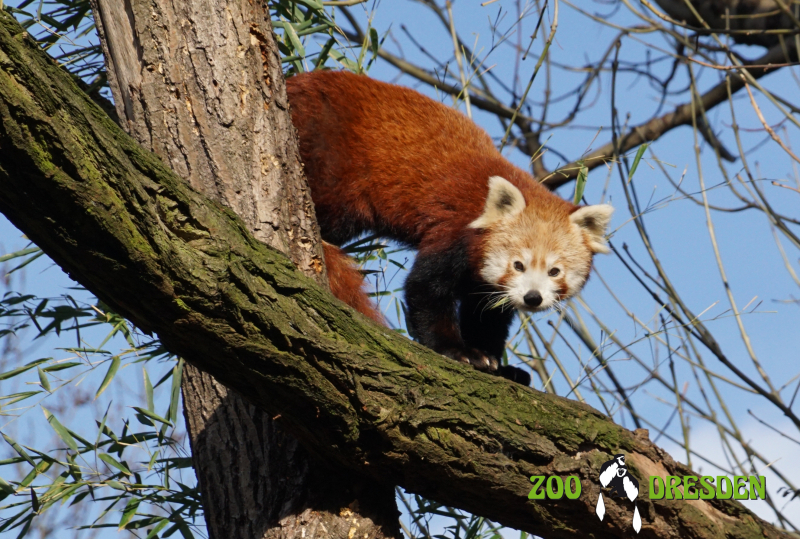 The Red Panda (Ailurus fulgens), also called the Lesser Panda, the Red Bear-cat, and the Red Cat-bear, is a mammal native to the eastern Himalayas and southwestern China. It has reddish-brown fur, a long, shaggy tail, and a waddling gait due to its shorter front legs. It measures at slightly larger than a domestic cat.

The Red Panda is arboreal and feeds mainly on bamboo, but they are also known to eat eggs, birds, and insects. A solitary species, they are mainly active from dusk to dawn and are largely sedentary during the day.

The Red Panda is currently classified as “Endangered” on the IUCN Red List of Threatened Species. Its wild population is estimated at less than 10,000 mature individuals, and the number continue to decline due to habitat loss, fragmentation, poaching, and inbreeding depression. Despite the fact that national laws in their native range countries protect them, their numbers continue to decline. 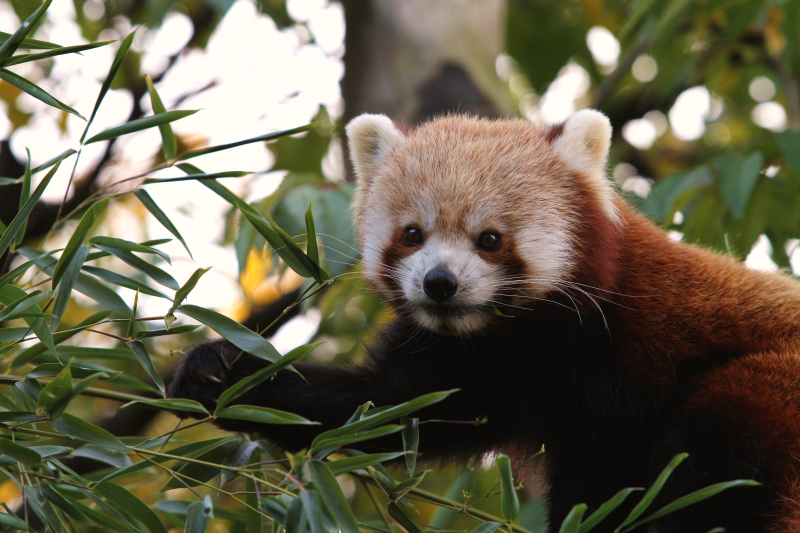 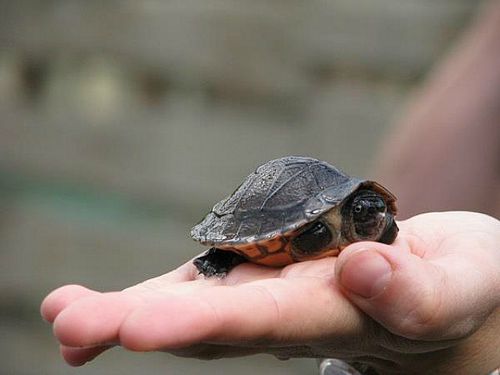 There's more baby animal news coming from the Dresden Zoo! For the first time, nine Borneo River Turtles (Orlitia borneensis) have hatched. This is also the first of its species hatched at a zoo in Germany.

Also known as the Malaysian Giant Turtle, the Borneo River Turtle is the largest river turtle, growing to be up to 32 inches (80 cm). They lead solitary lives, inhabiting fresh waters -- rivers and lakes -- in Malaysia, Borneo and Sumatra.

The Borneo River Turtle is considered Vulnerable in peninsular Malaysia and Endangered in Indonesia, where it is exported in large quantities despite official protection. It is threatened by hunting and poaching for sale in East Asian food markets in huge numbers. Therefore this successful breeding at the Dresden Zoo greatly aids the conservation of this rare turtle -- and what they learn can be shared with other zoos to support perpetuation of this species. 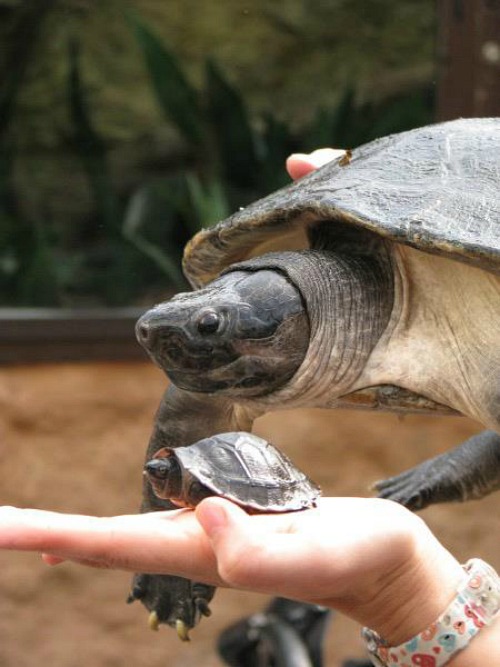 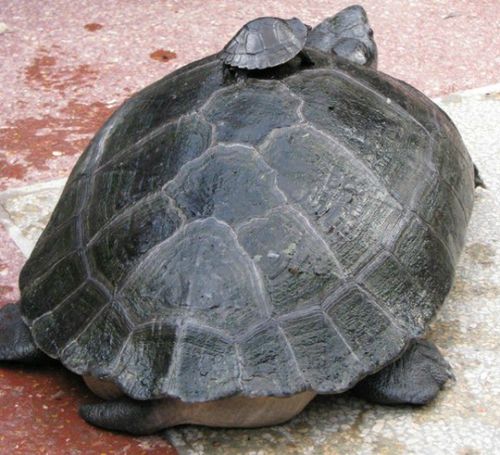 We've had several orangutan births featured lately, and Germany is the next to carry the torch. Born November 24th to proud mom Daisy, Dresden Zoo's tiny new orangutan is a real charmer, already full of character and eager to please. Much like humans, mother orangutans often teach their young through play. 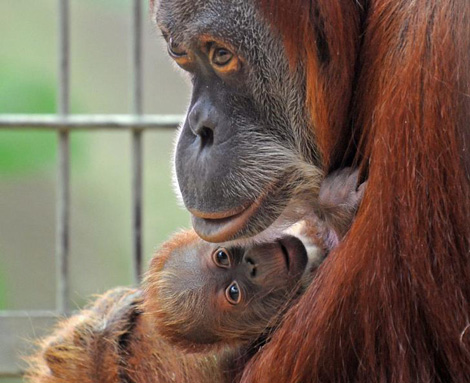 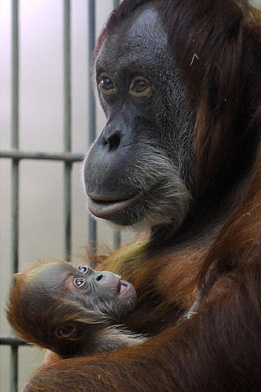 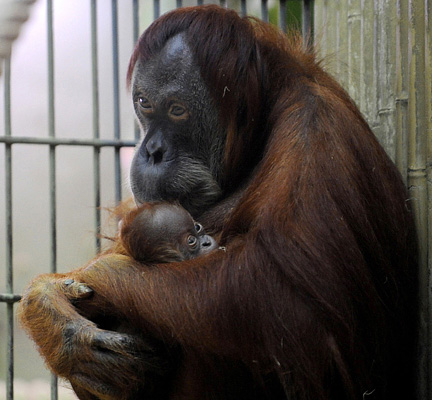 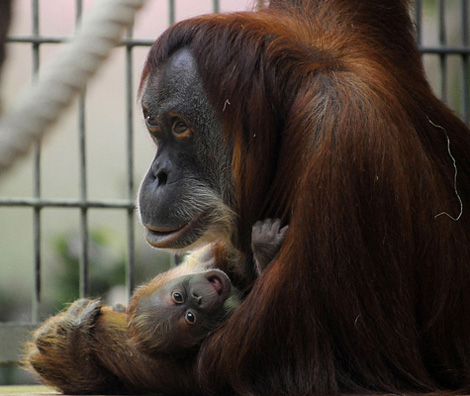