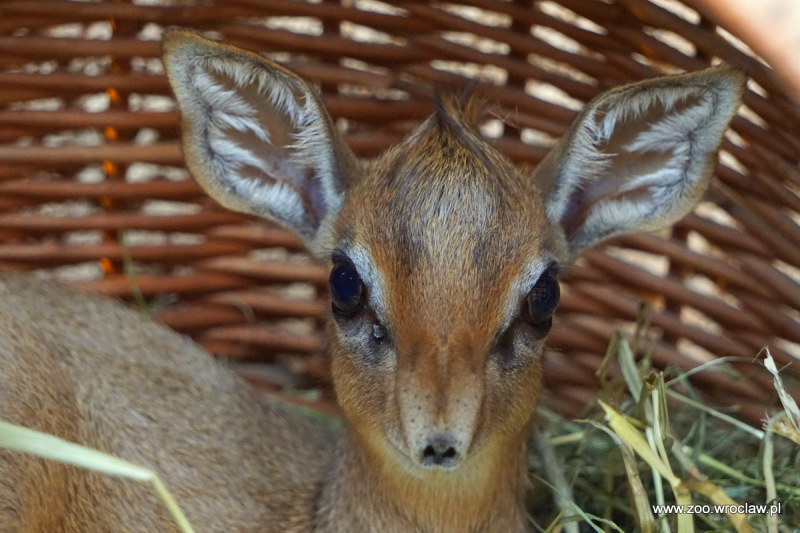 The months of February and March are traditionally the time of the year when Zoo Wroclaw welcomes new Dik-dik offspring. True to fashion, new mom, Lenonka, welcomed a female calf on February 26.

According to the Zoo’s tradition, newborns are given a music related name.

Because of their shared characteristic of blonde hair, the new Dik-dik is being called “Lady G” (a nod to Lady Gaga).

Zoo management has allowed the keepers a bit of creativity with the selection of names for the new births. As a result, Zoo Wroclaw is proud to relate that they are home to Elvis, Eminem, Lennon, Limahl, Loreen, and now Lady G! 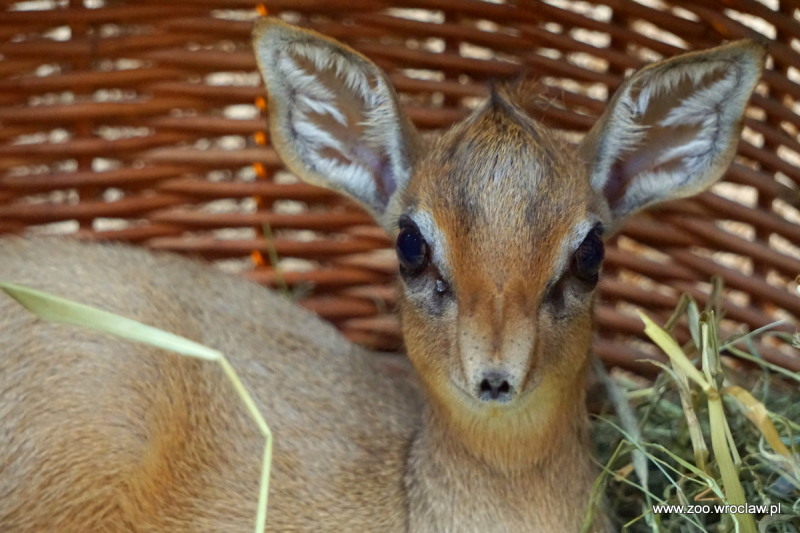 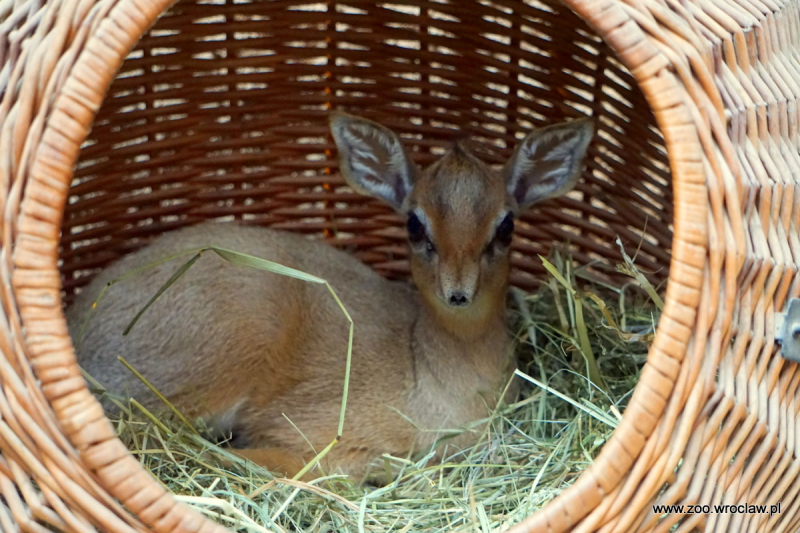 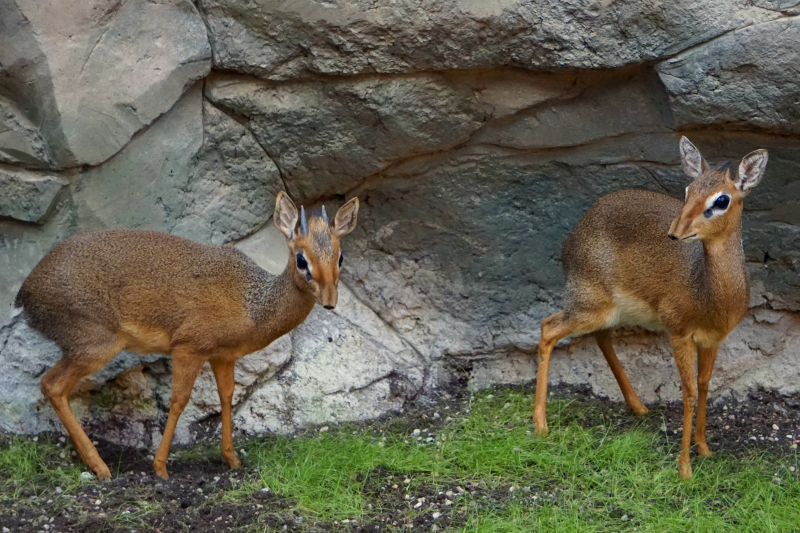 Kirk’s Dik-diks have made their home at Zoo Wroclaw since 2014. The Zoo’s most known member of the herd is Lady G’s father, Federiko. Keepers state he is almost always in a location within the exhibit that is visible to the public, as if he is guarding the rest of the herd.

Kirk's Dik-dik (Madoqua kirkii) is a small antelope native to Eastern Africa and one of four species of Dik-dik antelope. Dik-diks are herbivores and are typically of a fawn color that aids in camouflaging in savannah habitats.

The unique name is derived from its call. When threatened, Dik-diks lay low. If discovered, they run in a swift zigzag until finding another safe hiding spot. During this time, they are known to emit a call that sounds like “zik-zik” and is intended to raise an alarm.

The lifespan of Kirk's Dik-dik in the wild is typically 5 to 10 years. In captivity, males have been known to live up to 16 to 18 years.

The species is currently classified as “Least Concern” on the IUCN Red List. They have many natural enemies in the wild: leopards, cheetahs, jackals, baboons, eagles, and pythons.

However, the biggest threat awaits them from the human side. Not only are they hunted for use of their meat and bone, but they are also hunted for the production of leather. It has been said that at least two individual Dik-diks must be slaughtered to produce as little as one pair of leather gloves. 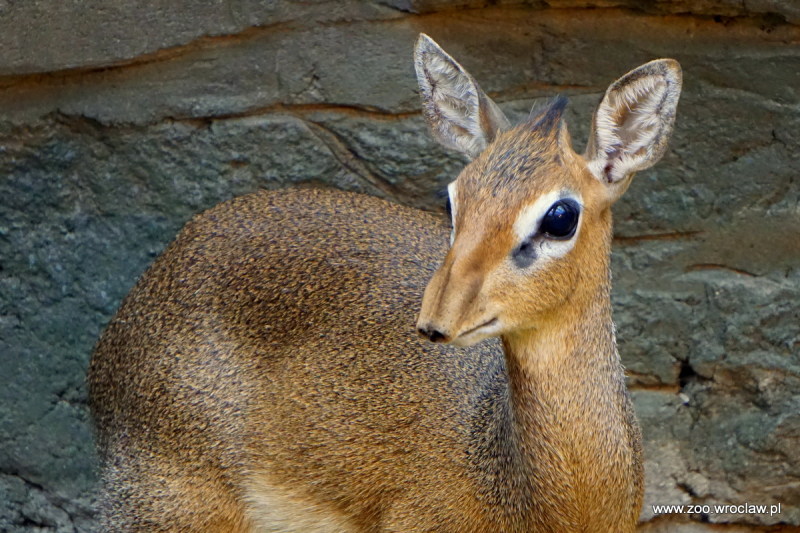 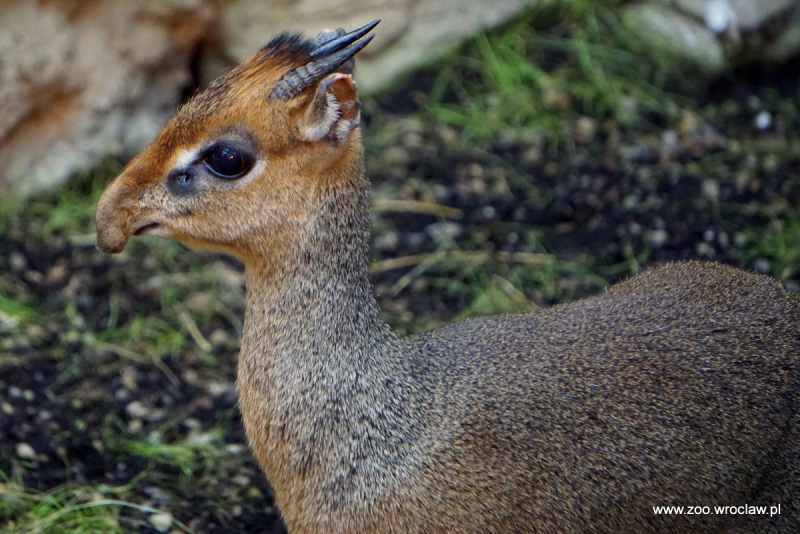 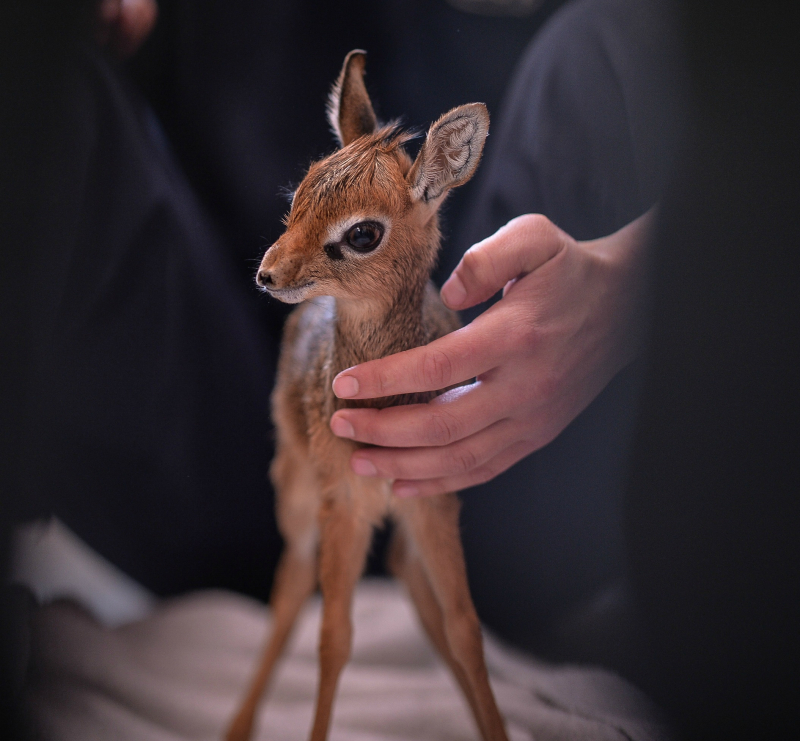 A tiny Dik-dik is making a big impression at Chester Zoo. The little Antelope is being cared for by zoo staff after its mother passed away soon after giving birth.

Standing only about 8 inches tall at the shoulders, the tiny Kirk’s Dik-dik is being bottle fed by staff five times a day. He will continue to receive a helping hand until he is old enough to eat by himself. 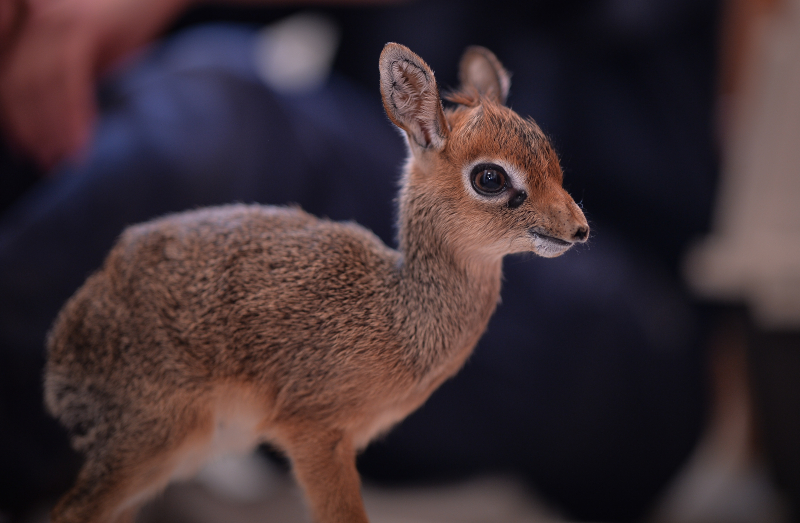 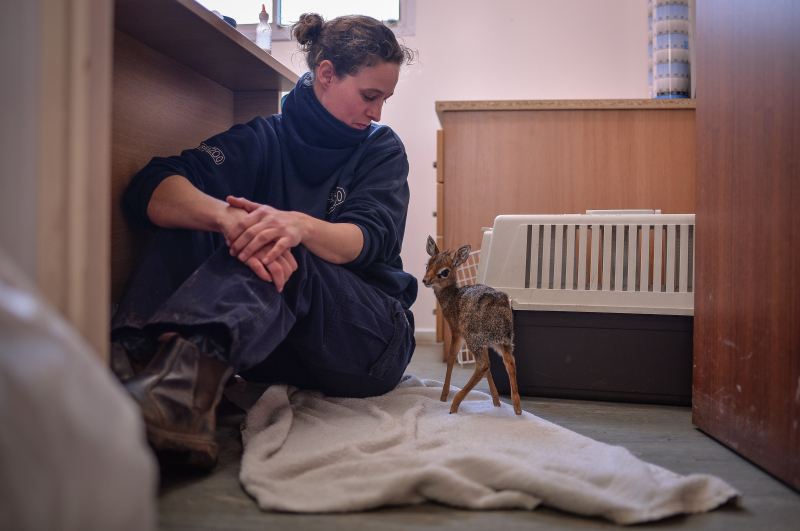 Assistant team manager Kim Wood and keeper Barbara Dreyer have both been caring for the new arrival, who is currently so light he doesn’t register a weight on the zoo’s set of antelope scales.

Kim said, “The youngster is beginning to find his feet now and is really starting to hold his own. We’re hopeful that, in a few months’ time, we’ll be able to introduce him to some of the other members of our group of Dik-diks.  He may be tiny but he is certainly making a big impression on everyone at the zoo.”

Kirk’s Dik-diks grow to a maximum size of just 16 inches tall at the shoulders, making them one of the smallest species of Antelope in the world.

The species takes its name from Sir John Kirk, a 19th century Scottish naturalist, as well as the alarm calls made by female Dik-diks.

Kirk’s Dik-diks are native to northeastern Africa and conservationists say they mark their territory with fluid from glands between their toes and just under their eyes, not dissimilar to tears. Populations in the wild are stable. When a Kirk’s Dik Dik was born in mid-October at thePueblo Zoo, keepers were thrilled.  But when his mother did not feed the male calf, keepers stepped in to provide daily care. 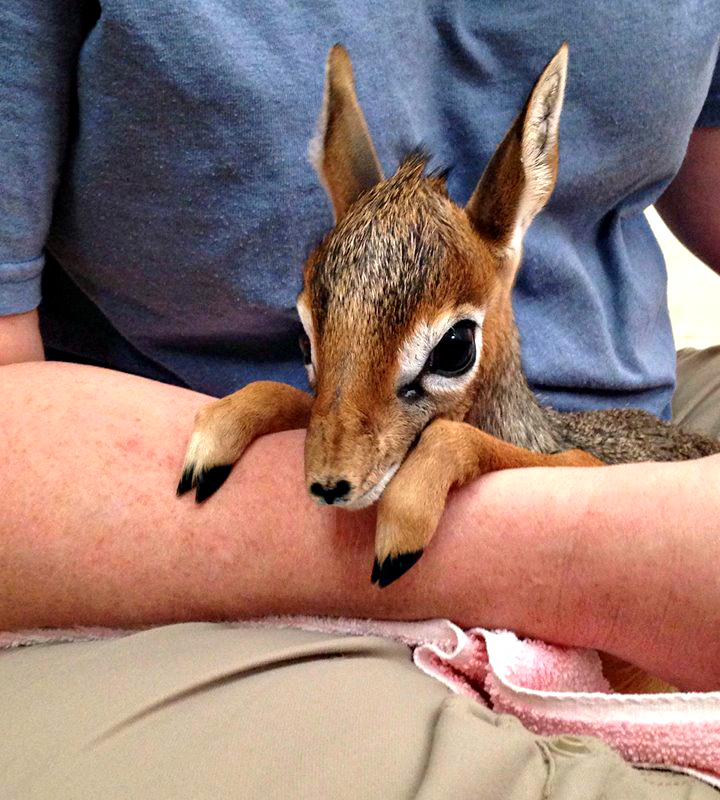 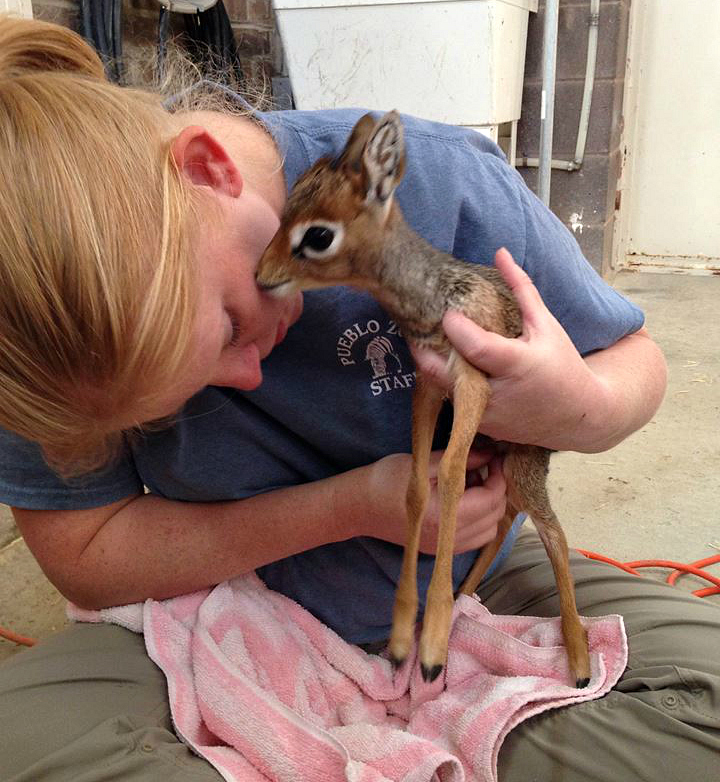 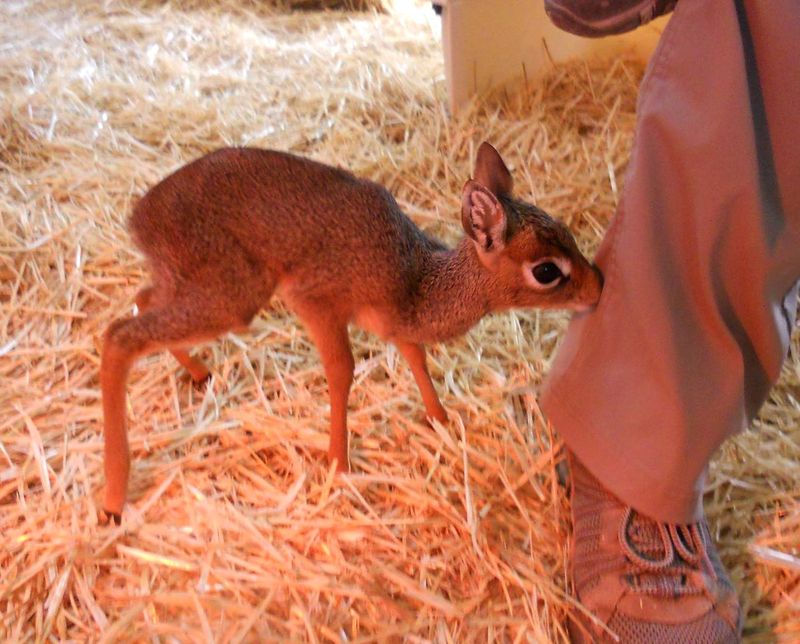 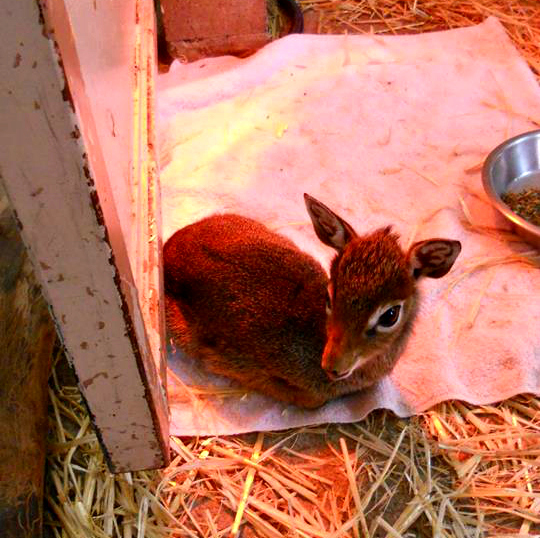 Though they look like miniature deer, Dik Diks are small antelope that stand just over a foot high at the shoulder.  Found on eastern Africa’s savannahs, Dik Diks may appear small and vulnerable.  But their excellent eyesight and ability to run up to 26 miles per hour enable them to escape predatory lions, hyenas, and wild dogs.

In addition, Dik Diks run in zig-zags as they escape, further confounding their pursuers.  As they flee, females emit an alarm call that sounds like “dik dik,” hence their name.

Dik Diks are widespread in Kenya and Tanzania, and populations are considered stable. 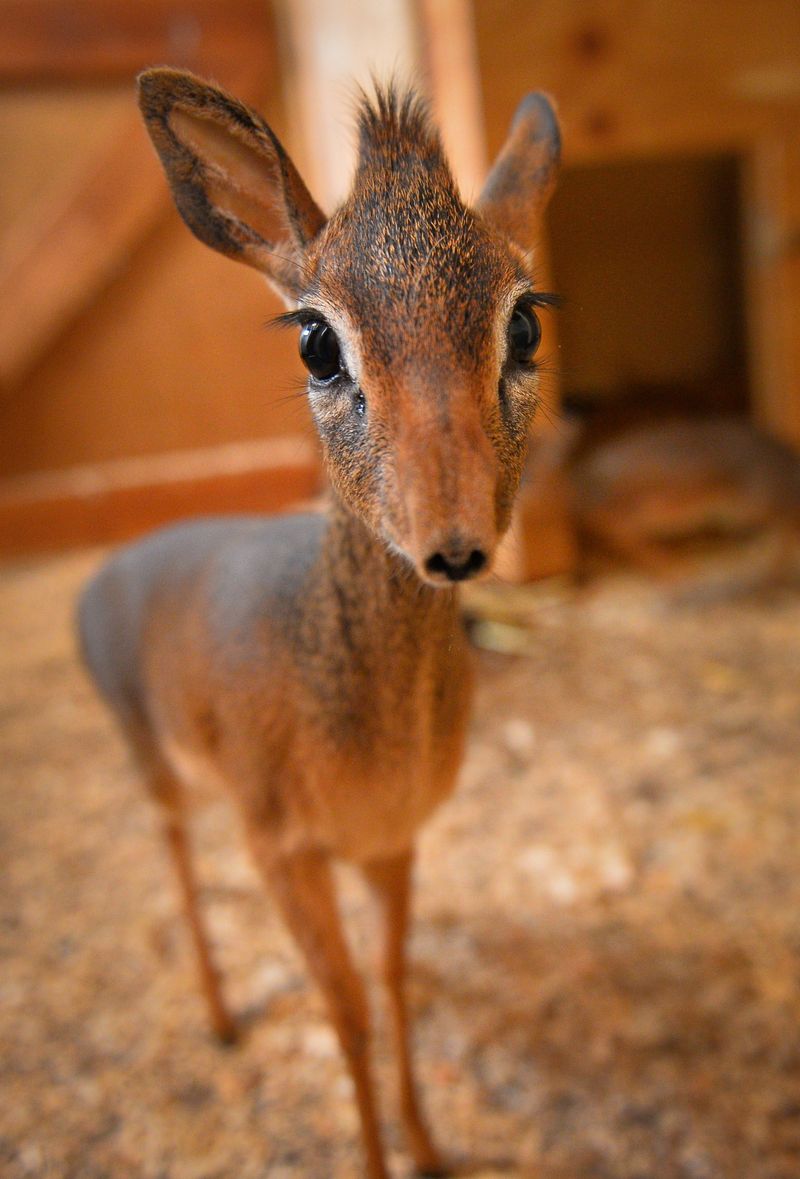 A tiny Kirk’s Dik-dik antelope, which was hand-reared by keepers after being rejected by her mom, has stepped in to help her much-smaller sibling. Eight-month-old Aluna is now playing the big sister to new arrival Neo at Chester Zoo in England, and the two have struck up a charming bond.

Keeper Claire McPhee says, "Dik-dik mothers do not always take to their young, and unfortunately Neo and his mum didn’t quite hit it off. But happily, his not-so-big sister Aluna ­- who herself didn’t manage to bond with her mum - is drawing on her own experiences and is being a real calming influence on him. They spend lots and lots of time in each other’s company and she’s really helping with his development in his crucial early days.

“Little Neo is only 20 centimeters (8 inches) tall and a little bit shy, nervous and jumpy around other Dik-diks. But Aluna is dishing out lots of special care and attention and it’s helping him integrate into the wider family group. She’s helping him to settle in nicely and it’s lovely to see.” 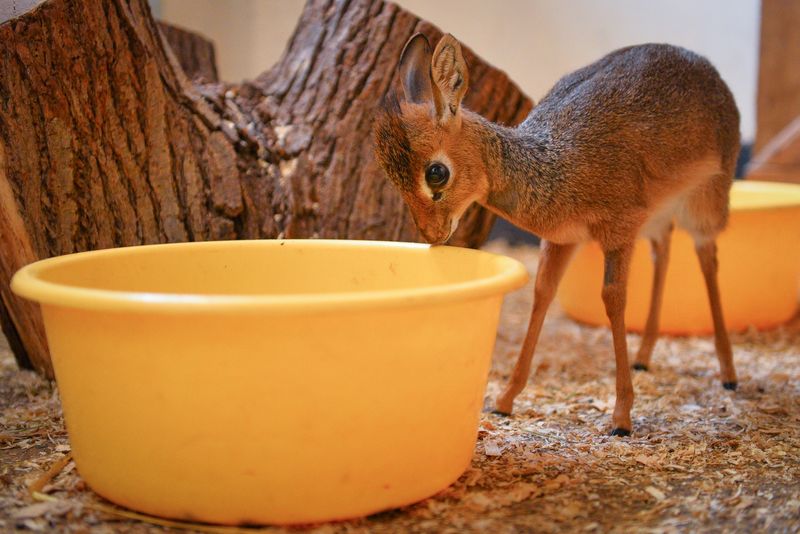 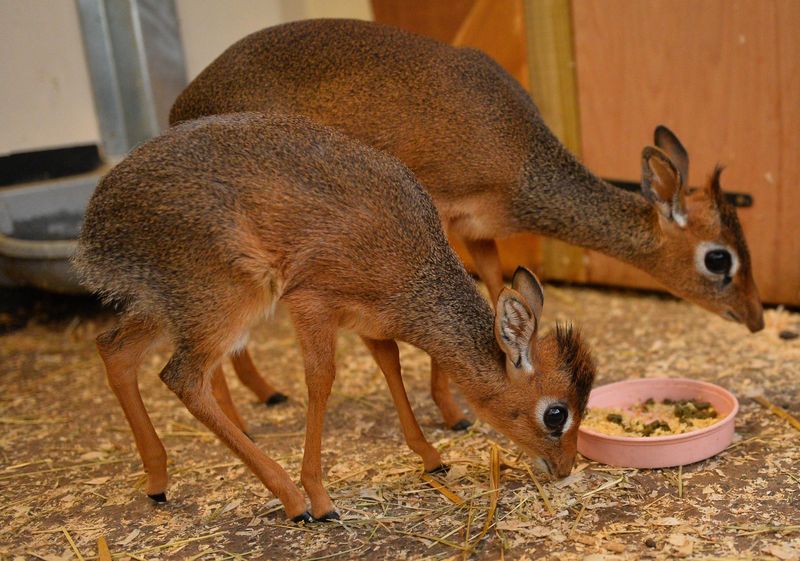 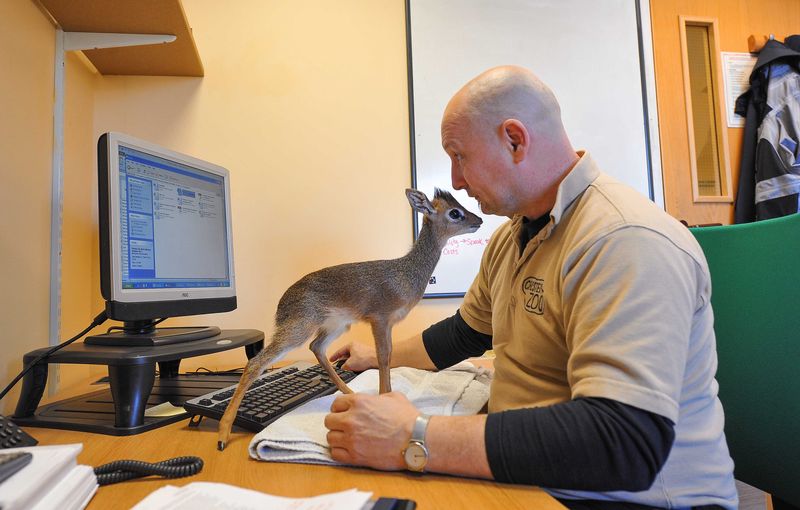 The Kirk's Dik-dik is native to Kenya, Tanzania and Namibia and is named after the sound it makes when fleeing danger. They can live for up to 10 years and reach a maximum size of about 16 inches (40 cm) tall, making them one of the smallest antelope species in the world.

The last photo is a throwback: a younger Aluna visits with Curator of Mammals Tim Rowlands, who bottle-fed her five times a day. 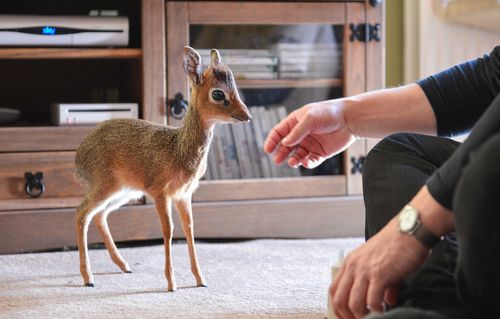 She stands just a few centimetres tall but this tiny new arrival at Chester Zoo is making a big impression. Aluna, the tiny Kirk’s Dik-dik Antelope, is not much taller than a TV remote.

For now, she is being bottle-fed milk five times a day by the zoo’s dedicated curator of mammals after she failed to bond with her mother. She will be given a helping hand until she is old enough to tuck into a diet of buds, shoots and fruit on her own. 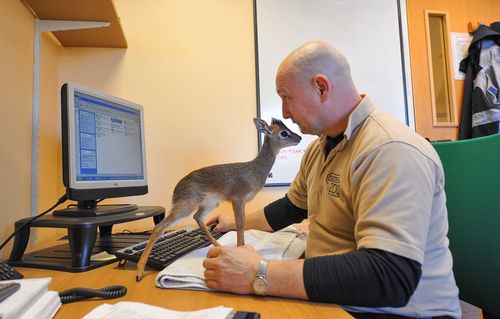 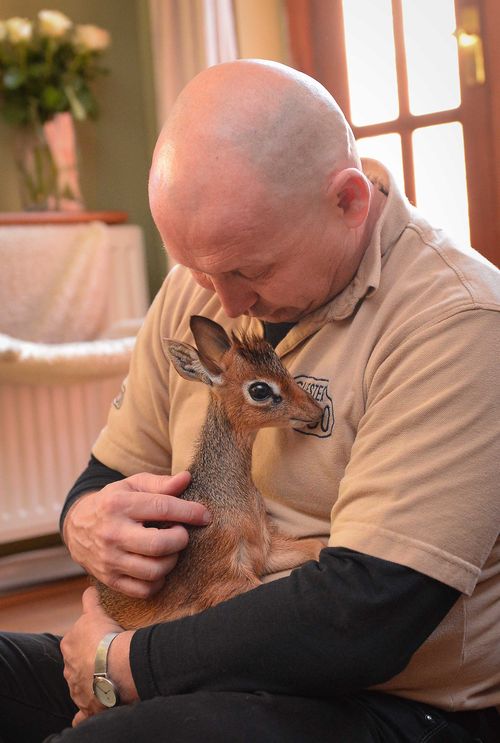 He said: “Our little one is growing stronger and stronger by the day and, all being well, it shouldn’t be too long until she‘ll be able to really hold her own. For the time being though her feed times are staggered through the day and she has her first bottle in my living room at home at around 7am. I then pop her into the car and bring her to work where she has another three feeds in my office. Finally, her last one is at 10pm back at my house.

“She’s already pretty quick on her feet and gives us quite the run around in the office. That’s why we’ve called here Aluna which means ‘come here’ in Swahili. It’s rather apt!”

Many more photos below the fold...

Rejected by its mother, this tiny Kirk's Dik-Dik is being hand raised by keepers at England's Chester Zoo. Standing just 10 inches tall, the baby is bottle fed five times a day and appears to be doing well. These small antelope are native to Eastern and Southwestern Africa. 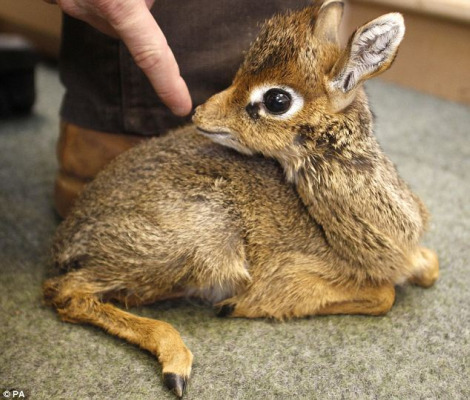 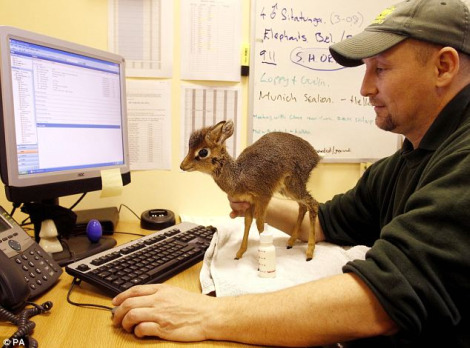 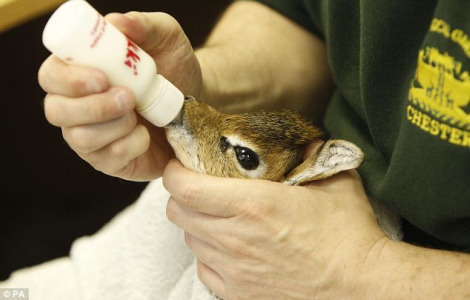 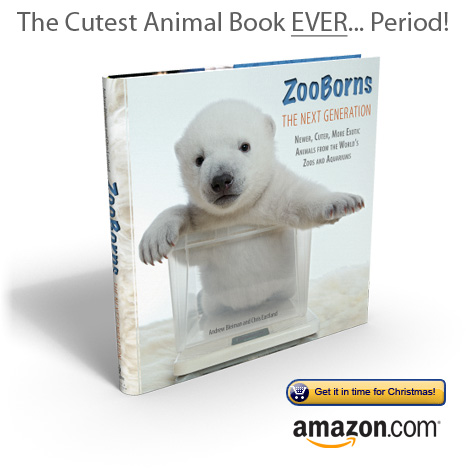 The world's smallest antelope, Dik-Diks reach only 12"-16" in adulthood. On September 10th, the Phoenix Zoo welcomed a newborn Dik-Dik to first-time mother "Gidget." Weighing under 2lbs, smaller than most guinea pigs, the tiny calf has grown quickly since birth. 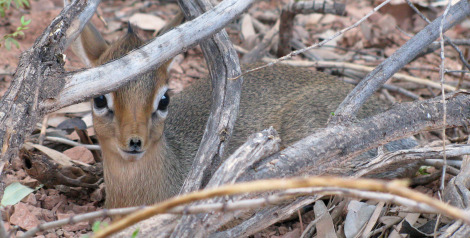 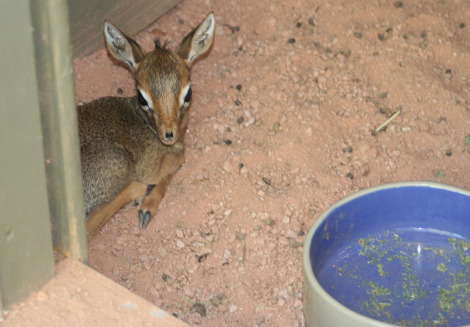 Read more about new baby Dik-dik "Moon" in a first hand account from the Phoenix Zoo's Hoof Stock Keeper by clicking "Continue reading" below and follow them on Twitter here.