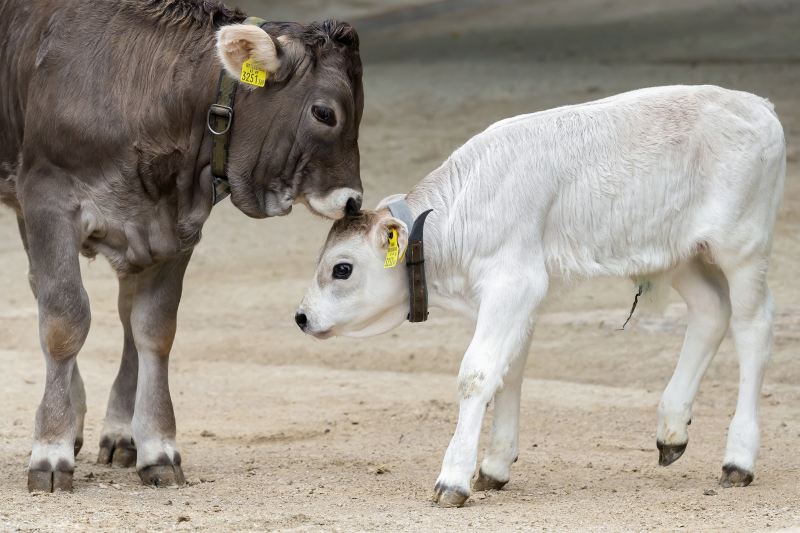 Just in time for the end of Summer, a Highland calf has been born to the delight of ecstatic Keepers at Noah’s Ark Zoo Farm for the first time in 5 years. 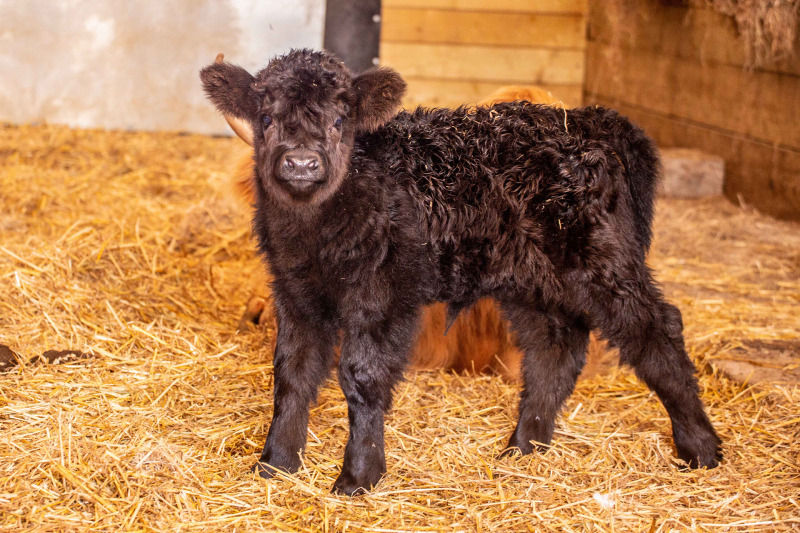 “Highland calves are the cutest thing, and we were so happy to see Bonnie. She’s already very confident and inquisitive.” Said Keeper Eleanor Steeds

“This is the first birth for Agnes, so she needed a little help at first, but she is already proving to be a great mum. For now, Bonnie will continue to stay with her mum, and we’ll be keeping a close eye on how she gets on.” she continued. 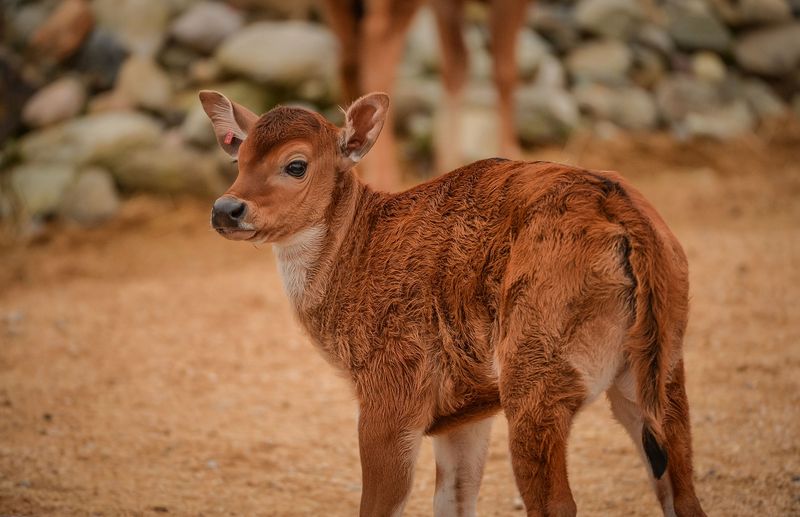 A rare Banteng born at Chester Zoo has provided a welcome boost to the conservation of the South East Asian species.

The Banteng is a wild forest-dwelling member of the cattle family. It is listed as “Endangered” by the International Union for the Conservation of Nature (IUCN). Its numbers have declined dramatically in the last 50 years due to habitat loss and hunting throughout its native range. Recent estimates suggest there could be fewer than 5,000 left in the wild.

But, in a bid to counteract the worsening threat to their survival, Chester Zoo has joined forces with the wider global zoo community, international conservationists and the Indonesian government to support Banteng conservation in South East Asia.

The coordinated approach to conservation brings together the skills of top zoos (breeding, animal husbandry, veterinary treatment and education) with those of local experts, conservationists and sanctuaries on the ground. 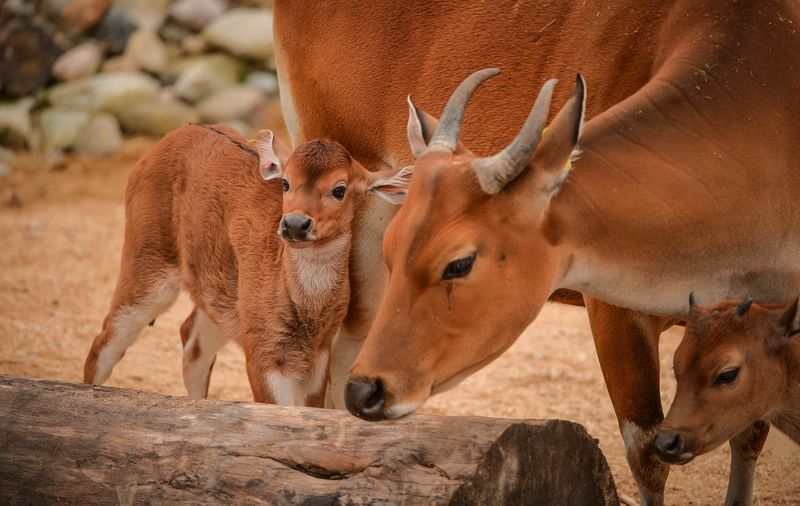 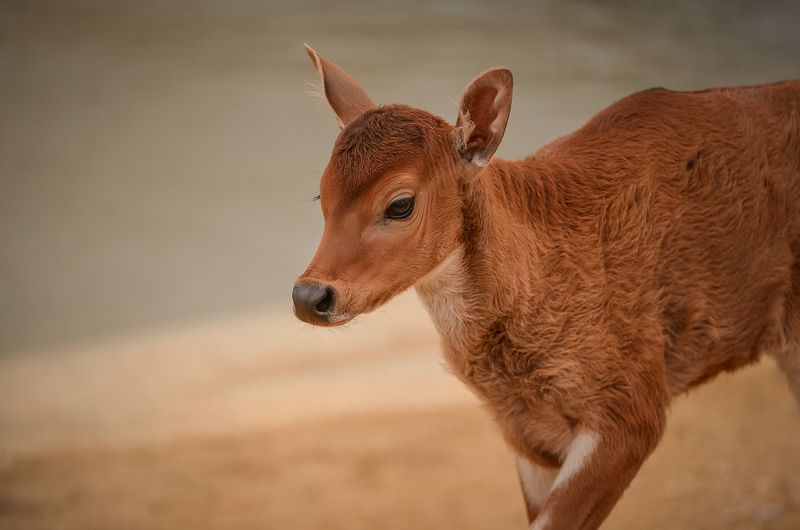 Chester Zoo’s new female Banteng calf, which keepers have named Jasmine, arrived to mum Pankhuri and dad Gaston. She is the first youngster to be born since the conservation collaboration was formed at the end of March 2016.

Johanna Rode-Margono, the Zoo’s South East Asia conservation field programme officer who is working on the conservation of Asian wild cattle, said, “Zoos from Europe, America and Indonesia, field conservationists and Indonesian government representatives have, for the first time, joined forces in a global collaboration - working together to share expertise and resources for the conservation of Banteng. The new-born calf is a very important step towards a sustainable insurance population of the species.”

Jasmine is one of the first mammals to be born in Chester Zoo’s new Islands Zone exhibit, which showcases threatened species from region of South East Asia. Her arrival means the zoo now has a herd of ten Banteng (four males and six females).

Tim Rowlands, curator of mammals at Chester Zoo, added, “By making sure there is a viable global population of Banteng in zoos, whose genetic diversity represents the genetic diversity in the wild, the global zoo community can play a key role in the conservation of the species. There’s no doubt that zoos are now an important piece of the puzzle in the long-term protection of Banteng.”

“We’re thrilled with our new calf and are pleased to say she is strong and doing extremely well. Hopefully she will draw some much needed attention to these very special animals and help us to highlight the plight of her cousins in the wild. The Banteng is one of the few remaining species of totally wild cattle in the world, and, in the wild, they are hardly ever seen.”

“Sadly the threat of extinction to these magnificent animals is imminent. Banteng are now rarely sighted in Malaysian and Indonesian Borneo where their remaining forest home is fragmented and populations isolated. They’re facing a real battle for their survival as forests across South East Asia are being turned into palm oil plantations and hunting for their horns and meat, although illegal, is rife.”

In mature males, the shorthaired coat is blue-black or dark chestnut in color, while in females and young it is chestnut with a dark dorsal stripe. Both males and females have white stockings on their lower legs, a white rump, a white muzzle, and white spots above the eyes. The build is similar to that of domestic cattle, but with a comparatively slender neck and small head, and a ridge on the back above the shoulders. The horns of females are short and tightly curved, pointing inward at the tips, while those of males arc upwards, growing 60 to 75 cm (24 to 30 in) long, and being connected by a horn-like bald patch on the forehead.

Banteng live in sparse forest where they feed on grasses, bamboo, fruit, leaves and young branches. The Banteng is generally active both night and day, but in places where humans are common they adopt a nocturnal schedule. Banteng tend to gather in herds of two to thirty members. 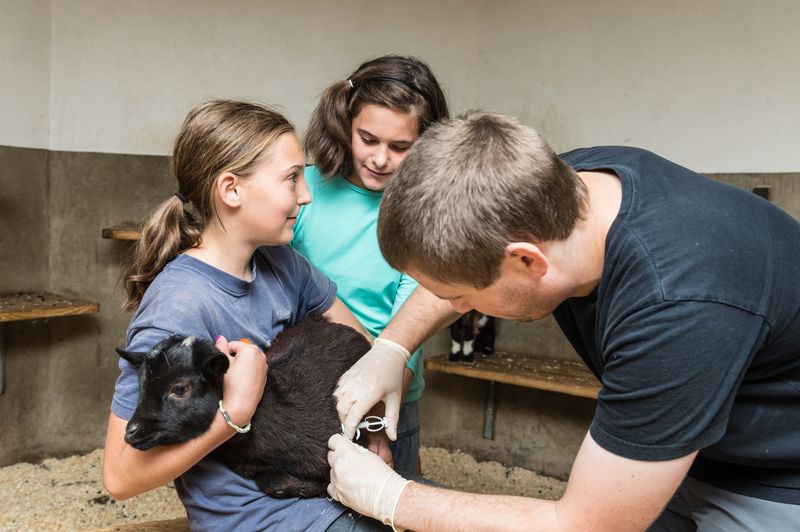 Seven Miniature Zebus, in the Children’s Zoo of Zoo Basel, Switzerland, have recently been given identification in the form of a microchip the size of a grain of rice. 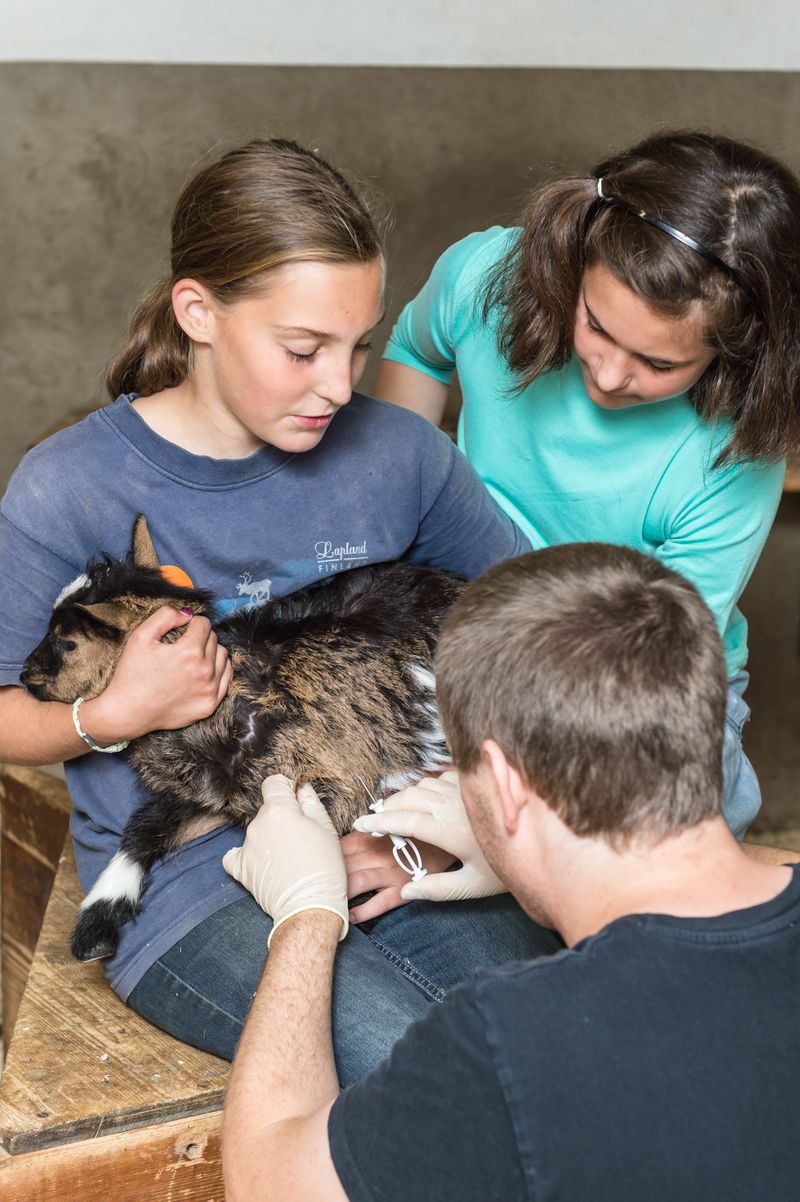 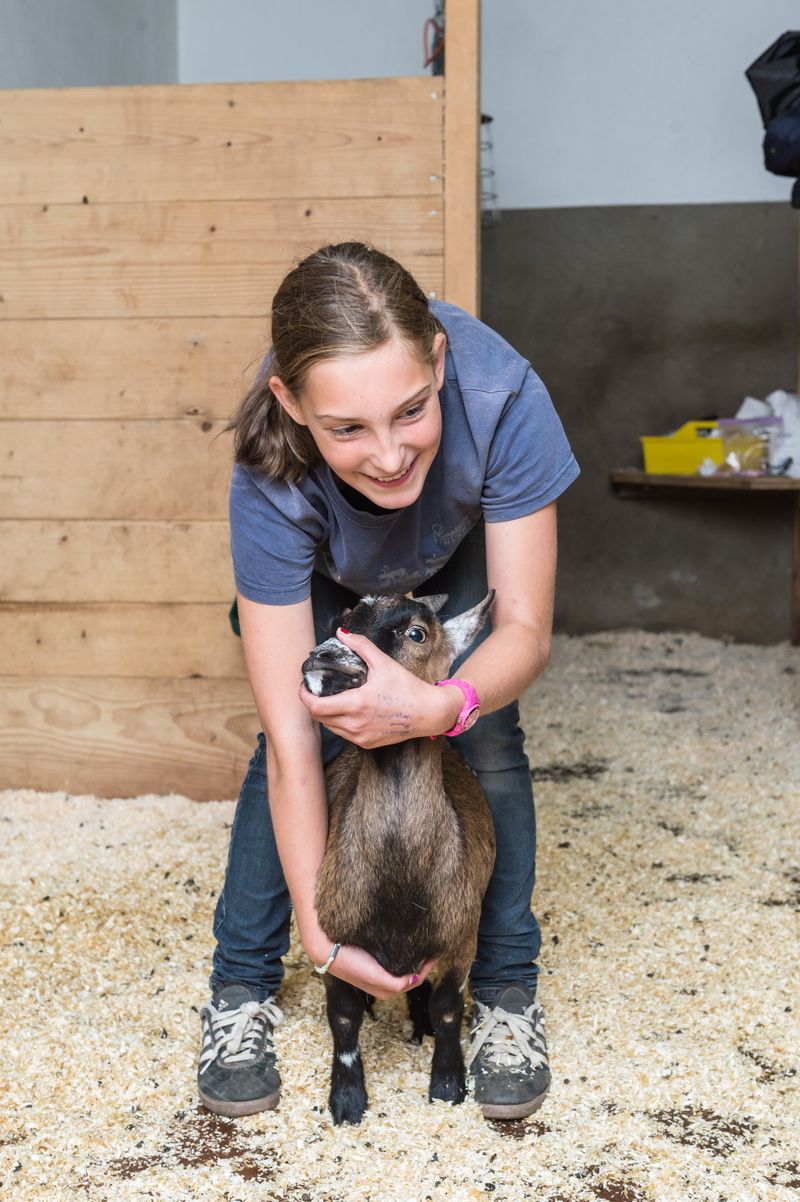 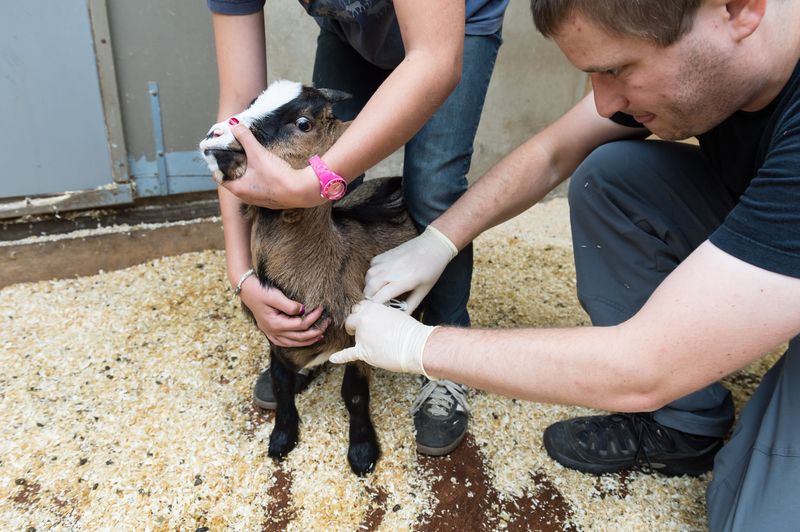 The microchip, also called a transponder, is fitted by a veterinarian beneath the skin, above the shoulder blades and contains a fifteen-digit code that can be read using a small mobile reader. Information on the microchip allows quick access for veterinarians, and includes date of birth, parentage, offspring, and medical conditions or treatment. The ability to differentiate between individual animals of a particular species is also required by the breeding initiatives sponsored by the European Endangered Species Programme (EEP), which enables zoos to ensure genetic diversity among their populations.

The veterinarians were assisted during the procedures by two young Children’s Zoo volunteers.  The girls, who work regularly with the animals at Zoo Basel, kept the animals calm and relaxed during the fitting.

Since the procedure cannot be performed on adult animals without anesthesia, the chips are, ideally, fitted at a very early age. In addition to the Miniature Zebu calves, several other species of zoo babies received microchips.  A Lion cub, Snow Leopard cub, a critically endangered African Wild Ass foal, and a young Sable Antelope received the transponders.

There's a New Texan in Town 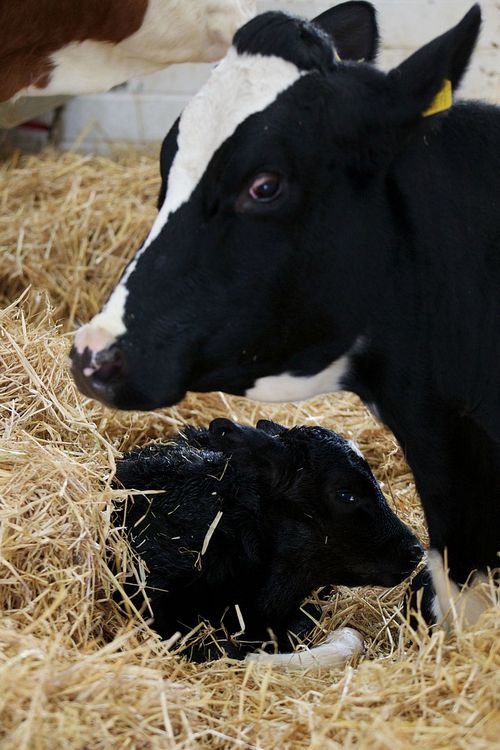 On the Family Farm at Ireland's Dublin Zoo, Bella, a Friesian cow, gave birth to a healthy male calf. The baby was born early on the morning of January 25, and he was nursing within three hours. This is Bella’s second calf. Team leader Eddie O’Brien describes the newborn as being jet black, except for a white star on his forehead, and four white socks. The breed’s characteristic black patches can be replaced with an orangey-tan color found in a minority of the cows; they are called "reds".

A Friesian cow can refer to any of a number of black-and-white spotted dairy cattle - Dutch, Swedish, British and the commonly known American. Friesian breeds are commonly known as Holstein cattle, recognized for good milk production. They are found all over the world, from New Zealand to Canada. 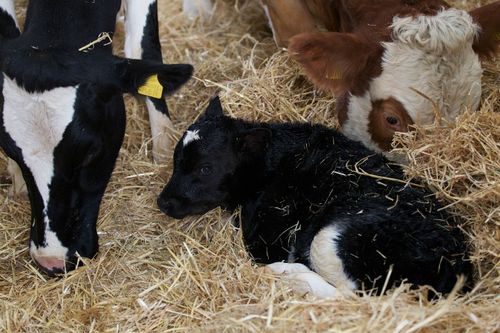 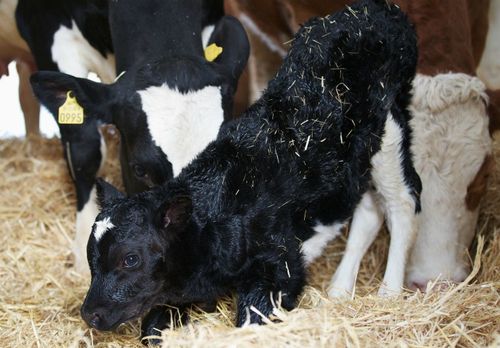 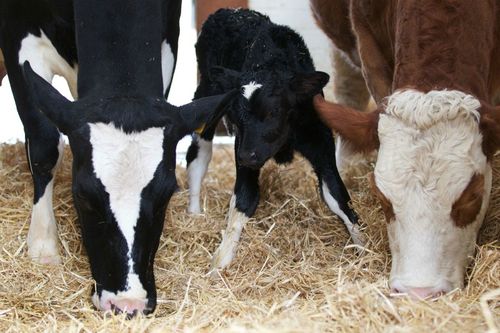 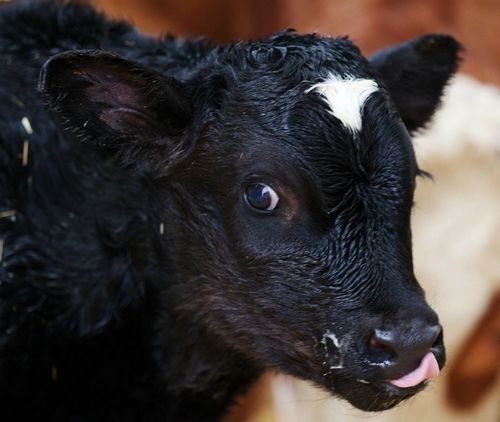