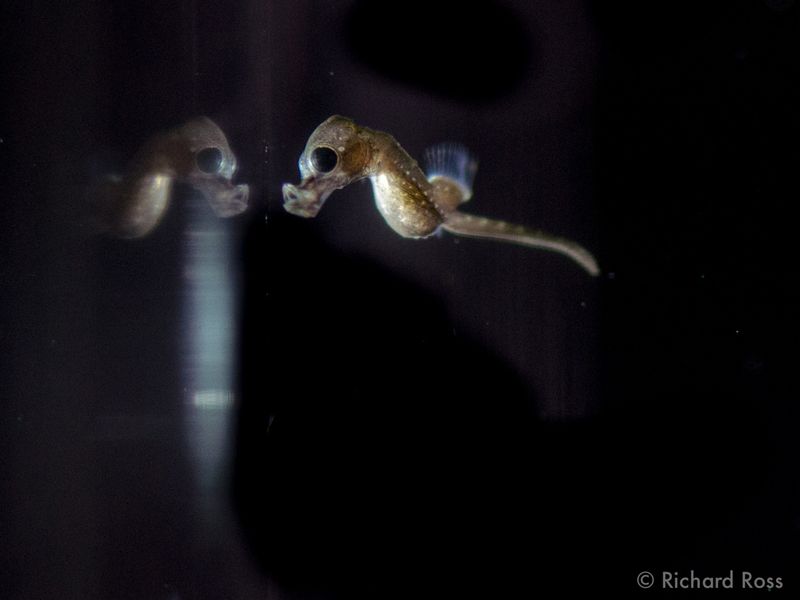 With their tiny tails wrapped around pieces of coral, a group of baby Bargibat’s Pygmy Sea Horses at the Steinhart Aquarium are among the first of this species to be hatched and cared for in an aquarium. 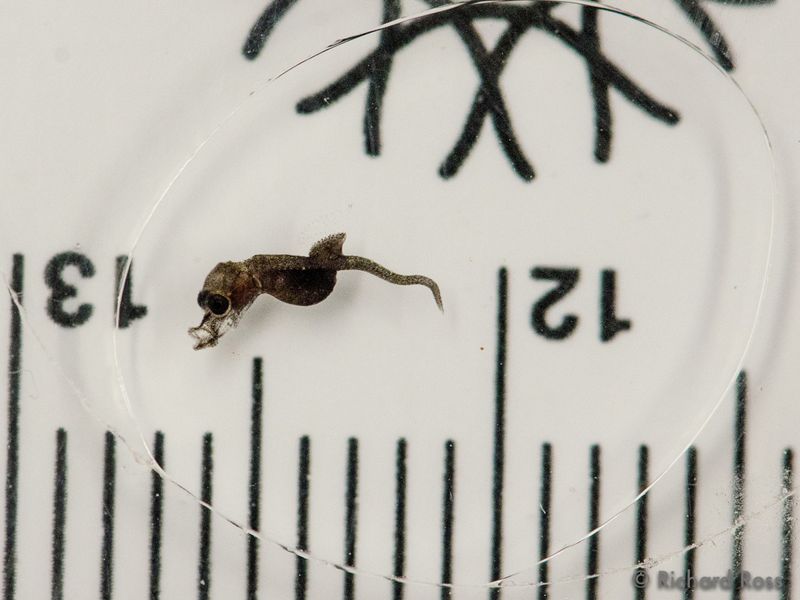 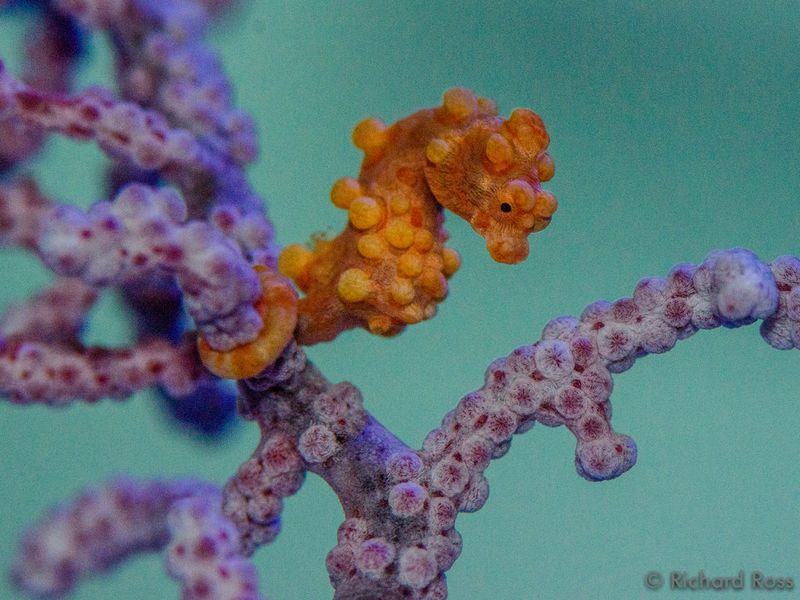 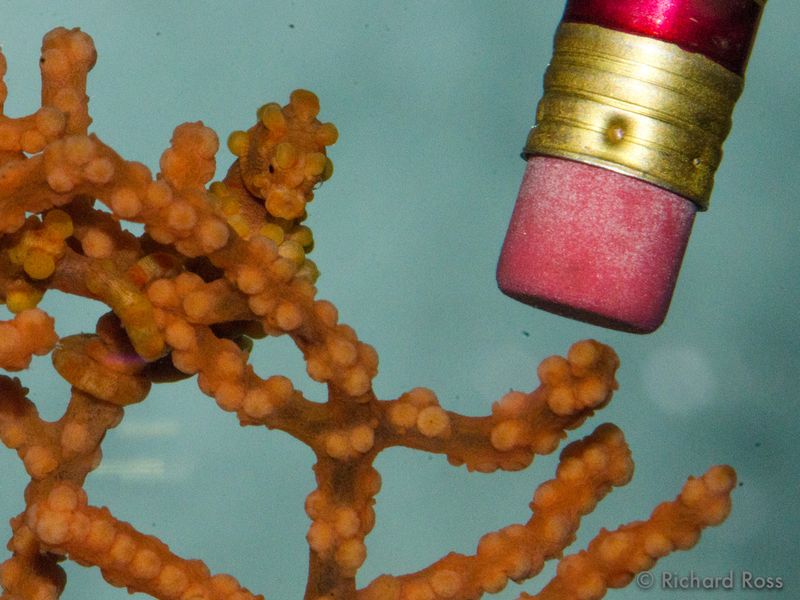 Less than an inch long, Bargibat’s Pygmy Sea Horses spend their entire adult lives attached to a species of coral known as a sea fan (Murciella paraplectana).  The sea fan is the reason that these fish are rarely found in captivity – the conditions for maintaining the coral in an aquarium are challenging, because it only feeds on plankton.  The color and texture of the adult Pygmy Sea Horses matches those of the sea fan so closely that the Pygmy Sea Horses are nearly impossible to see.  Babies begin life with more drab coloration.

Biologists Richard Ross and Matt Wandell, who care for and study the Pygmy Sea Horses, have observed the adults engaging in a mating ritual that involves rubbing snouts and bumping heads.  The female lays her eggs in the male’s belly sac.  He then fertilizes and incubates the eggs for 14 days.  About 60 to 70 babies result from each breeding cycle.

There are eight known species of Pygmy Sea Horses.  They are found in the Pacific Ocean near Australia, the Phillippines, and nearby islands.

See more phtos of these aquatic wonders below. 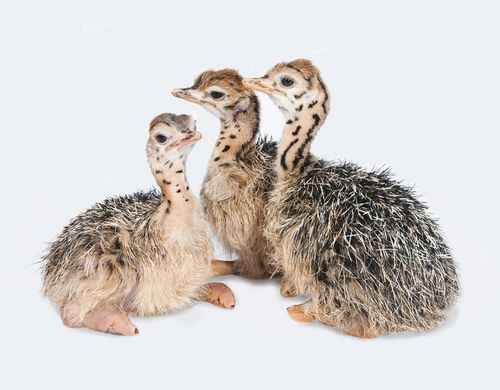 The California Academy of Sciences in San Francisco unveiled a new exhibit and planetarium show called Earthquake: Life on a Dynamic Planet on May 26.  In addition to plate tectonics and preparedness, the exhibit covers how earth processes shape our landscapes and thus influence evolution over millions of years. That’s where the baby ostriches come in.

Earthquakes fit into the larger story of plate tectonics, a constant process that builds mountains, moves continents, and creates the landscape in which life evolves.  In the case of the ostrich, it and its closest relatives — other flightless birds like the emu, cassowary, kiwi, and rhea — are scattered today all over the Southern Hemisphere, on continents that are thousands of miles apart.  Yet they all evolved from a common ancestor, one that lived during a time when all the southern continents were joined together.  Their distribution today is evidence that the Earth’s landmasses have moved great distances in the past—a validation of plate tectonic theory. The ostrich chicks will be on display until late 2012. 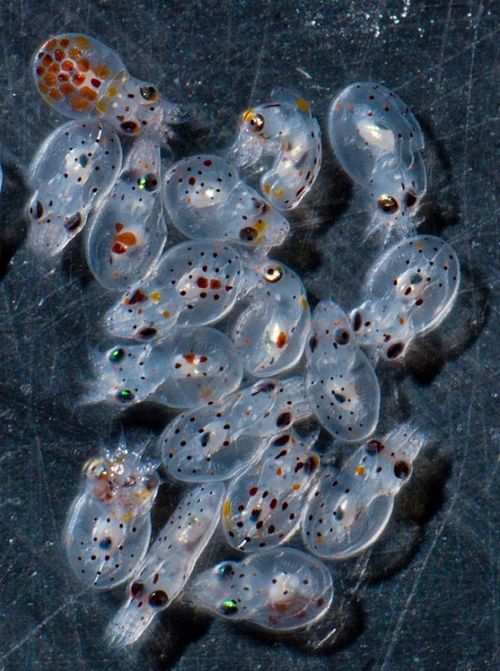 Shortly after being put on exhibit at the California Academy of Sciences, this Caribbean Octopus vulgaris took up residence inside a glass bottle, on full view for adoring fans. Just as quickly, it moved back under a rock and started denning, and laying eggs. While eggs being laid in captivity is generally an exciting event, this particular species, like many but not all octopus, stops eating after it lays eggs and dies soon after they hatch which tends to put a damper on the joyous occasion. The biologist responsible for their care, Richard Ross, caught the hatching of the eggs from start to finish on film, and describes it as a waterfall flowing upwards toward the water's surface. Now, Ross faces the difficult task of trying to support thousands of tiny hatchlings. This species is "small egged" meaning it produces large numbers of very small planktonic 'paralarvae' which are notoriously difficult to feed and raise. The adult female and hatchlings will be on display for as long as possible in the Staff Picks area of Steinhart Aquarium at the California Academy of Sciences.

Yup, those little guys are what you think they are. Lots of baby octopuses! 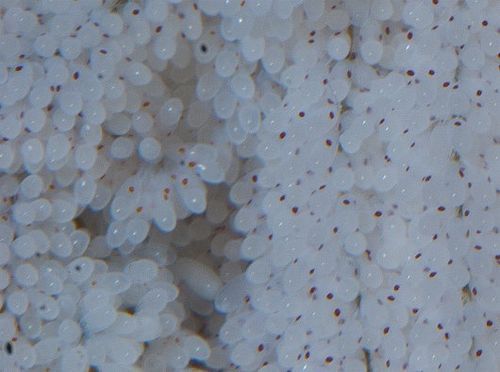 More pictures below the fold