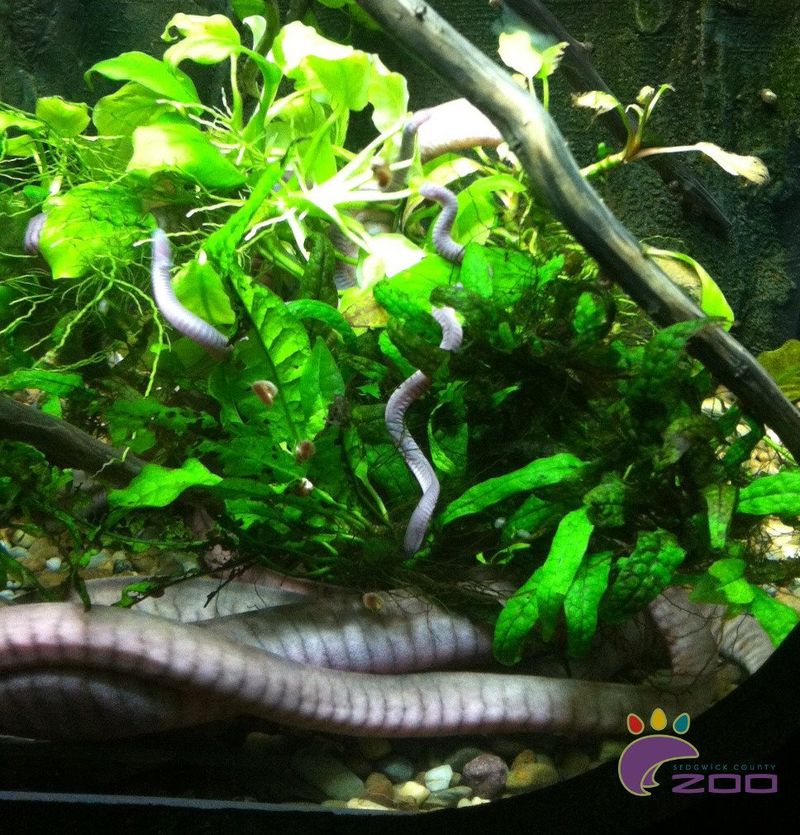 On December 12, eight Kaup's Caecilians were born on exhibit at the Sedgwick County Zoo in Kansas! Although they might look like earthworms or little snakes, Caecilians (pronounced seh-SILL-yens) are amphibians, related to frogs and salamanders. They are by far the least familiar group of amphibians for zoo visitors. The births are believed to be the first captive reproduction of this poorly known and virtually unstudied species.

Ranging throughout the tropics of the Americas, Africa, and Asia, most Caecilians are blind and live entirely underground. However, a few Amazonian species are aquatic, such as the Kaup’s Caecilian. 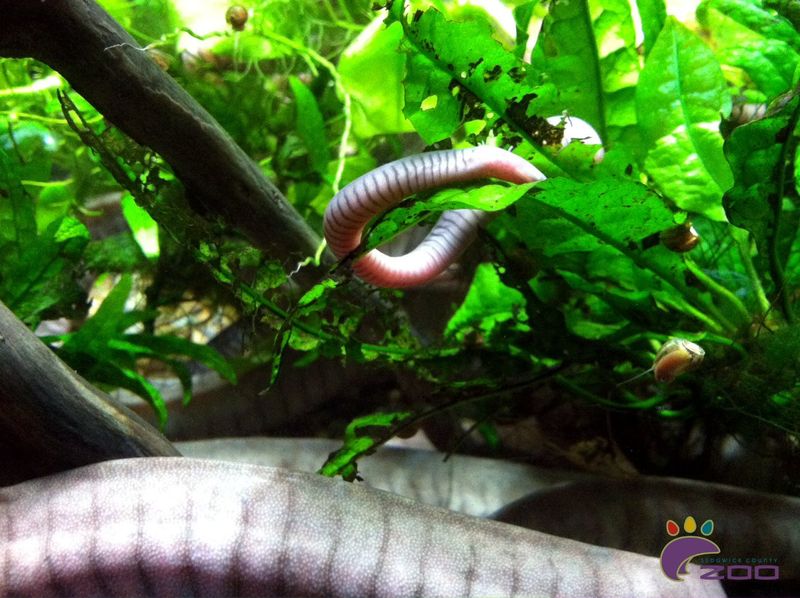 Here's a video of the births. At the end there is a much clearer view of the swimming babies.

Rather than laying eggs, Kaup's Caecilians give birth to live, fully-developed young. The pinkish youngsters were born with large, sac-like gills which quickly detached from their bodies during the birthing process. Unlike the gills of other amphibians, the gills of Kaup's Caecilians are thought to serve a placenta-like function while in the mother's body, and are not used for respiration after birth.

The babies are currently in a behind-the-scenes area. However, the adults can be found in the zoo's Amphibian & Reptile building. 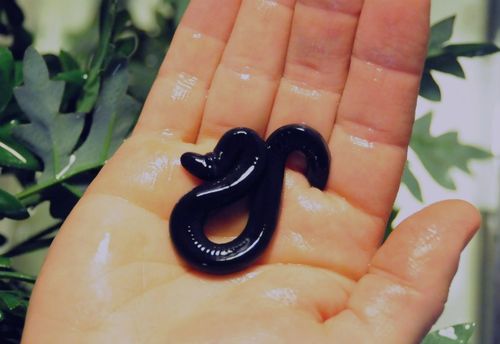 "This is the first Caecilian born at the Virginia Zoo," said Craig Pelke, Birds and Cctotherms Curator at the Virginia Zoo. Resembling large earthworms or small snakes, Caecilians completely lack limbs and swim like an eel. Their skin is smooth and a dark-matte blue-grayish-brown in color. Their eyes are small and covered by skin for protection; Caecilians have poor eyesight, which is limited to light and dark perception, but have a great sense of smell.

Just over 6 inches long (15.2 cm), the baby Caecilian has been moved off exhibit to a separate holding tank away from the adults. It's still too early to tell if it is male or female. "We first brought them here in 2008 to help celebrate the Year of the Frog and we recently acquired 4 juveniles from the Turtleback Zoo in West Orange, New Jersey."

"When it gets closer to adult size, we'll move it back on exhibit, but that could be months," said Martha Hamilton, a zookeeper who cares for the Caecilians.

This species fo Caecilian, the Rio Cauca (Typhlonectes natans), is also referred to as "blue worms." They are aquatic amphibians that give live birth in the water. They range from western and northern Colombia to the Lake Maracaibo Basin in Venezuela, where they live in drainage systems, rivers, marshes and lakes, thriving in polluted water. 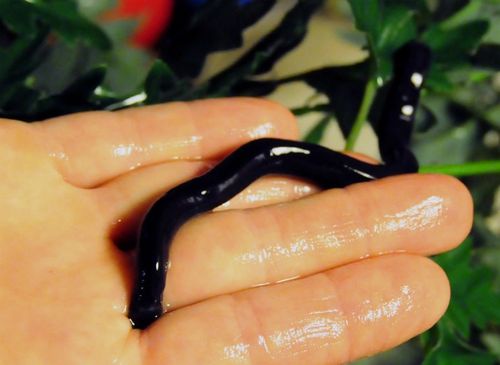 Eel? Worm? Baby sea-monster? Actually Caecilians are amphibians like frogs and salamanders, but they lack any limbs and their eyes are tiny or non-existent. Most caecilians live underground in moist soil but Aquatic Caecilians, like these babies born at the Tennessee Aquarium July 18th, spend their lives wriggling within swamps, ponds and lakes.

While nearly all caecilians have lungs including Aquatic Caecilians, this species is also born with frilly, external gills, which can clearly be seen in the pictures below. The gills detach from the animal’s body shortly after getting its first breath of air from the surface. We recommend watching the video to see these bizarre critters in action. 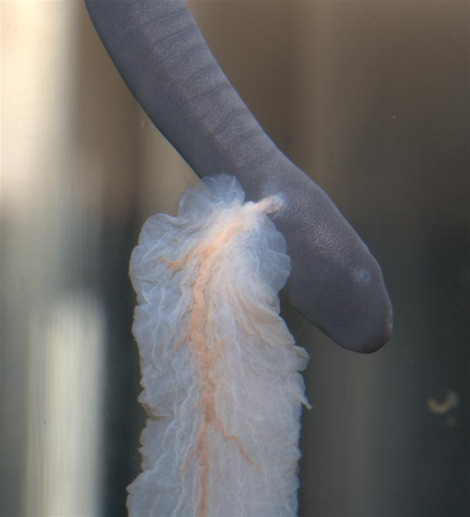 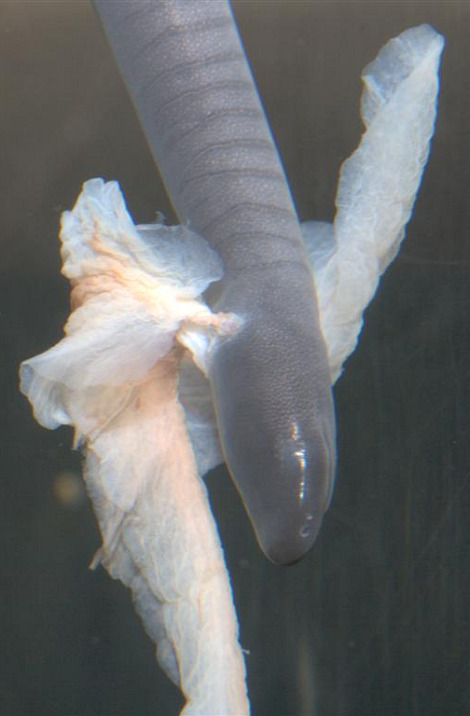 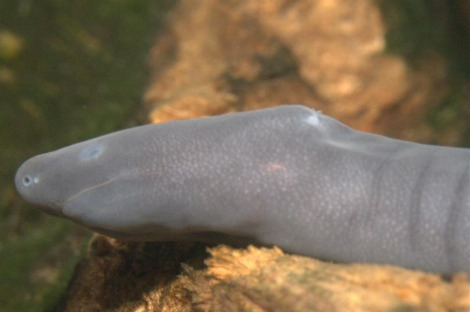