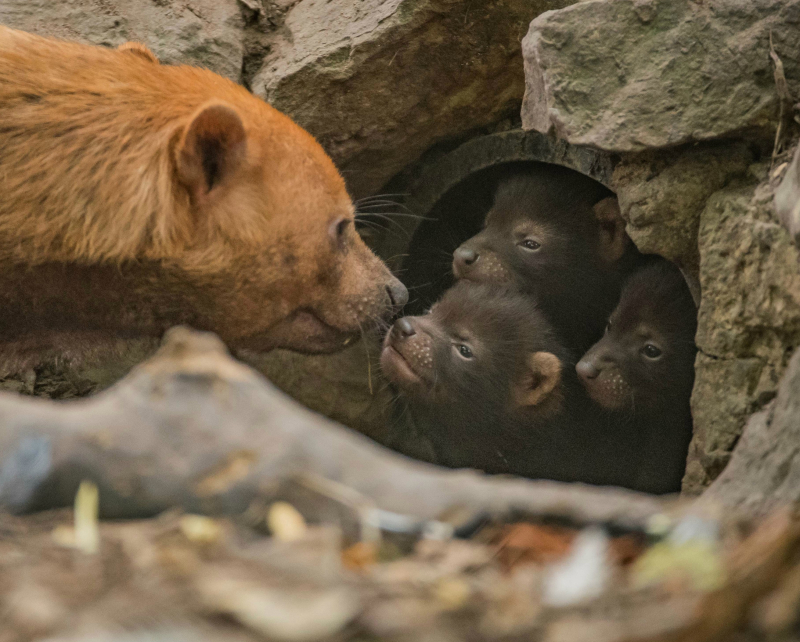 The biggest Bush Dog litter ever born at Chester Zoo has emerged from its den.

The six pups, born to mother Mana, age 7, and dad Franco, age 4, have made their public debuts after spending their first few weeks of life tucked away in their underground burrows. 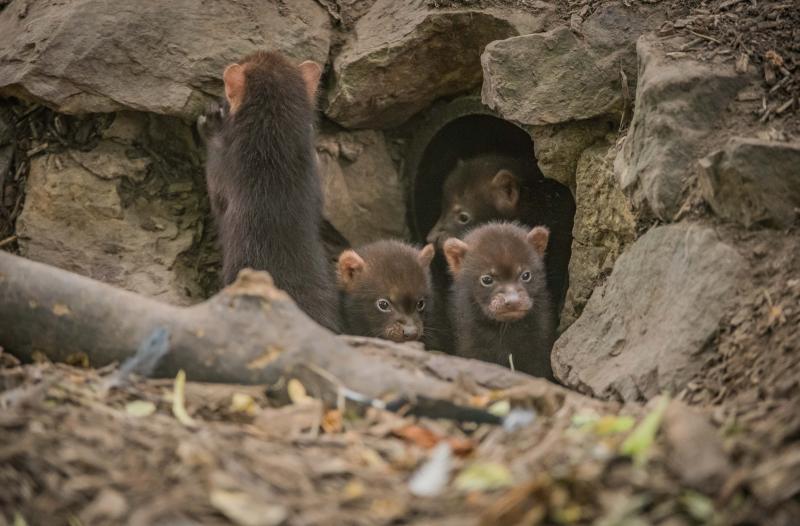 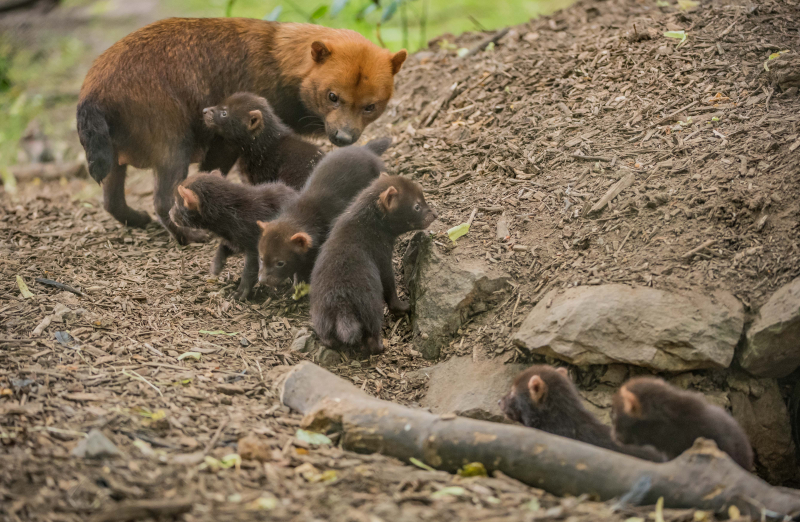 Keepers believe the first of the sextuplets arrived on May 13, which is when they first heard tiny cries coming from the dens as they performed their morning rounds.

The litter, which is above the average size for Bush Dogs and is made up of two boys and four girls, is the largest to be born at the zoo.

Now, the youngsters have come out to play and have begun exploring the outside world under the watchful eye of their parents.

Tim Rowlands, Curator of Mammals at the zoo, said, “Mana is doing a wonderful job of caring for her new pups but with it being her biggest litter ever, she’s certainly got her paws full. We’ve seen fairly big litters of four or five pups born in the past, but never have we had a litter of six.

The zoo’s Bush Dog pack now contains 16 individuals. In the next few weeks, the newest pups will be weighed and sexed by the care team.

Bush Dogs belong to the canine family and live in small isolated populations in the wet forests and grasslands of Central and South America. They have evolved over thousands of years to have a web of skin between their toes, which makes them excellent swimmers.

Sightings of Bush Dogs in the wild are becoming increasingly rare with the International Union for Conservation of Nature (IUCN) listing the species as Near Threatened. Their wild numbers have dropped by more than 25% in just 12 years. This decline is caused by destruction of natural areas for farms and other human developments, poaching for their meat, and diseases contracted from domestic dogs.

Chester Zoo has supported partners in Misiones, Argentina, where conservationists helped to create a biological corridor of habitat for a range of carnivorous species to help improve the movement between different areas of fragmented forest.

See more photos of the sextuplets below. 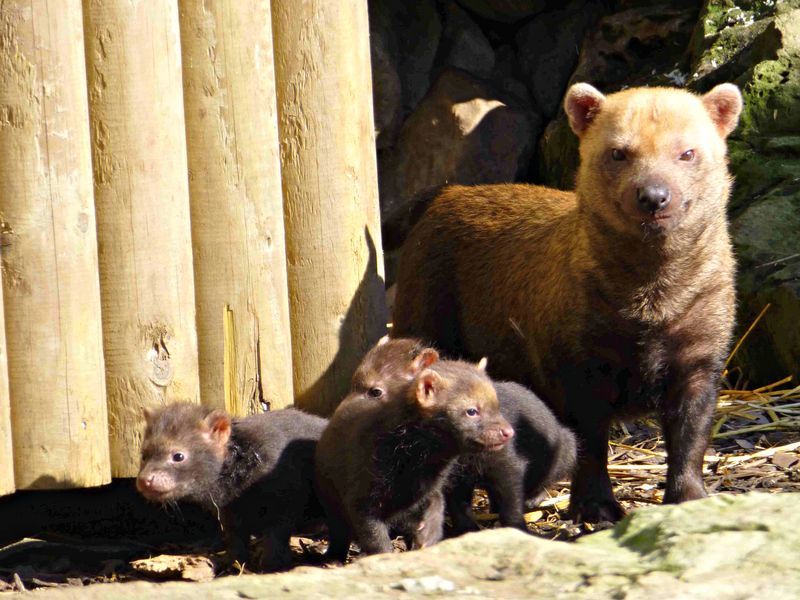 On October 21, Twycross Zoo in the UK welcomed three South American Bush Dogs, the first litter of Bush Dog pups to be born at the zoo in almost a decade!

First time parents Japura and Aztec are doing a superb job caring for their new offspring. The pups have so far remained in their nest, but are now beginning to venture into their outdoor viewing area a few times a day as they explore their new surroundings.

Zookeeper Chris Simpson comments, “When we arrived on the morning of the August 21st, we knew Japura had given birth overnight, but it took a week or so to confirm there were three pups in the litter. They are yet to be sexed so we haven’t got names for the new arrivals at the moment.” 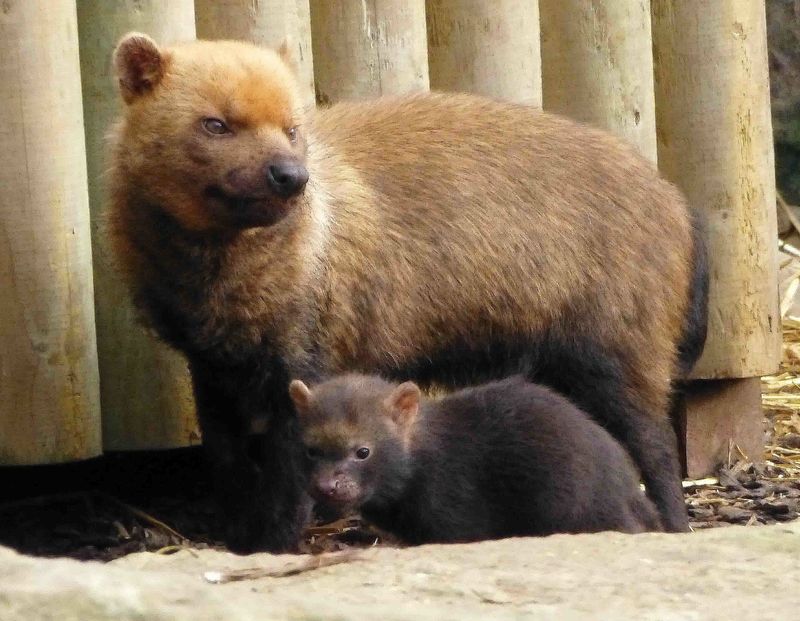 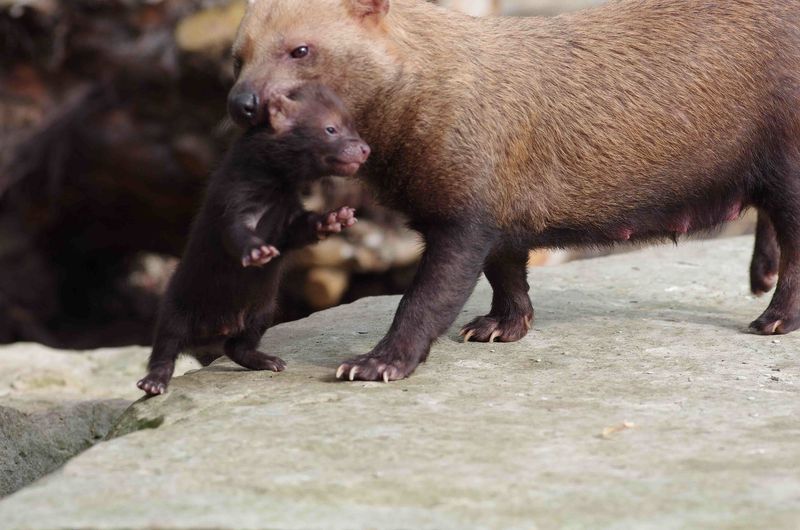 Bush Dog pups are born with their eyes closed, and for the first few weeks stay in their nest where both parents will protect, clean and help transport them.

Senior Zoo Keeper Kirsten Wicks adds, “Before the babies were born, Aztec was quite possessive with food and always made sure he ate before Japura. However, now we’ve noticed that when we feed Aztec he’ll take the food and present it to Japura, and then wait for her to eat before he does. For a first time dad he’s doing a great job caring for Japura, as well as the pups.”

Team Leader Julian Chapman says, “The fact that these animals have produced their first litter within a year of moving into their new enclosure is a testament to the thought and effort that the staff at Twycross Zoo are putting into the redevelopment of the animal enclosures. Hopes are high for several other species such as the Amur leopards and prairie marmots which have also had their enclosure redeveloped this year.”

Bush Dogs are classified by the International Union for Conservation of Nature as Near Threatened. Their threats are poorly understood, but include loss of habitat to development for farming, loss of prey species, and an increase in diseases affecting canines. 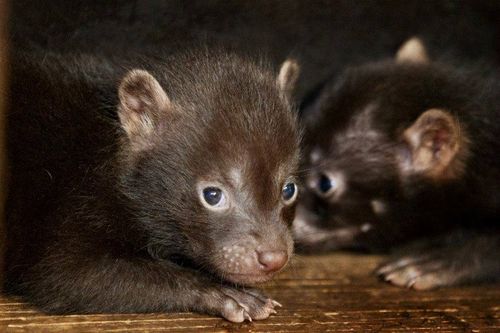 Prague Zoo is celebrating a quadruple success in their 10-year efforts to breed Bush Dogs. The litter of 4 is made up of 3 females and 1 male. The puppies have already started leaving the breeding box to explore their exhibit. These quadruplets are a genetically important addition to Europe's Bush Dog population. Their father arrived at the Prague Zoo from Japan after two years of negotiations, making him unrelated to any other dog in Europe. The zoo is the only Czech zoo with these carnivorous canines. 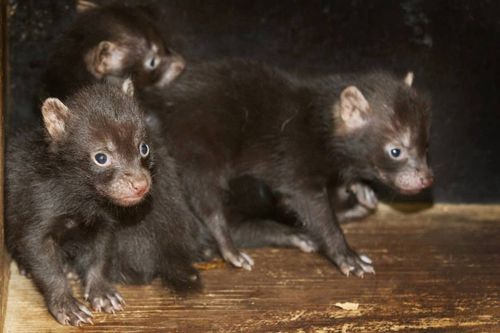 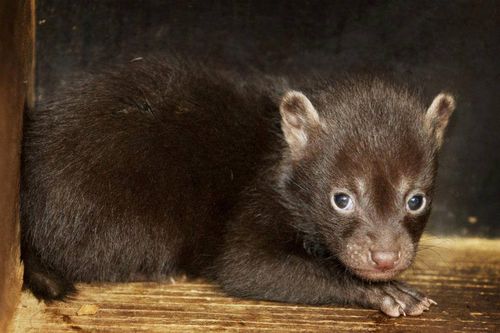 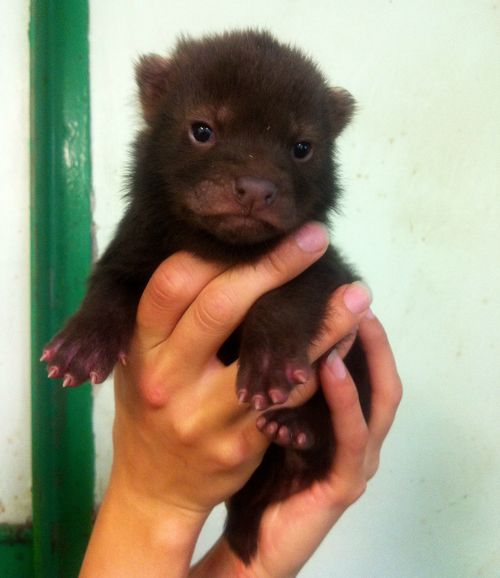 Four Bush Dog pups were born on July 14 at Sweden’s Kolmården Zoo.  The two male and two female pups have spent most of the past month in the den with their mother Salma, but are gradually starting to venture out.  In another month, they should go into the viewing enclosure where they can be seen by zoo visitors. 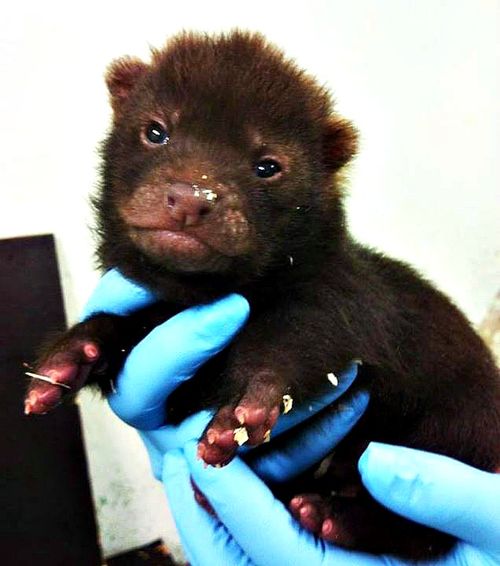 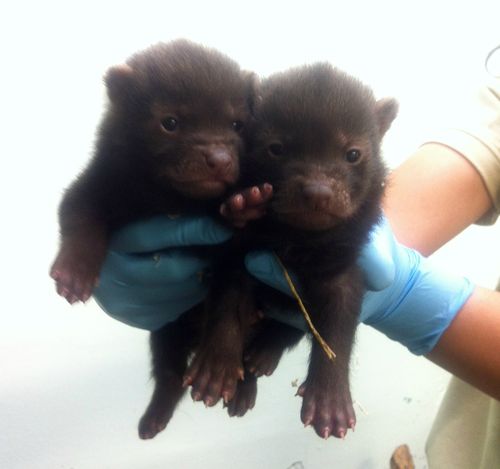 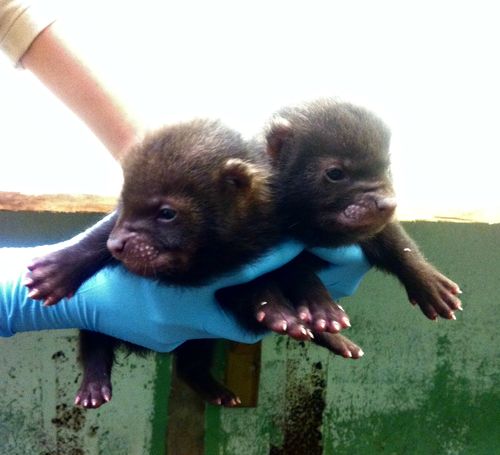 Native to Central and South America, Bush Dogs live in packs and hunt cooperatively.  They feed on large rodents like pacas, agouti, and capybaras.  They prefer to live in open forests, but may also live in pastures.

The Bush Dogs’ closest relatives are thought to be Maned Wolves.  Bush Dogs are not threatened, but they are becoming rarer throughout their range.

See more photos of the pups below the fold.

In late May, Chester Zoo welcomed a litter of seven Bush Dog pups, which were photographed by Gary Wilson. Like wolves and domestic dogs, the Bush Dog is a member of the canine family (Canidae) but the relationship is distant and they developed to look very different. In fact, Bush Dogs descended from Maned Wolves which are themselves not closely related to any other living wolf or fox. Small and shy, Bush Dogs were first discovered as fossils in Brazilian caves in the 1800s and scientists were suprised when they discovered living Bush Dogs years later. They are found in the wet forests and grasslands of Central and South America, where specialized skin between their toes makes them excellent swimmers. 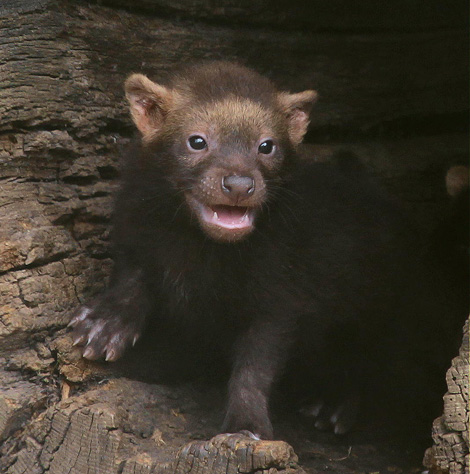 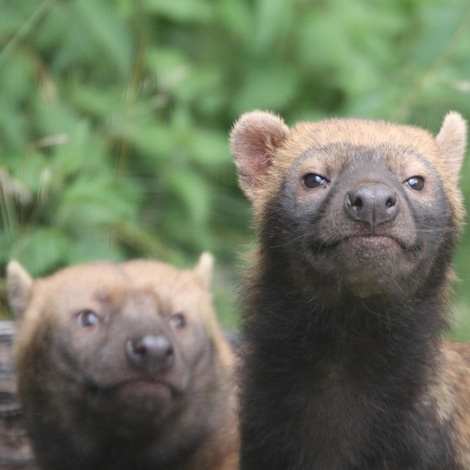 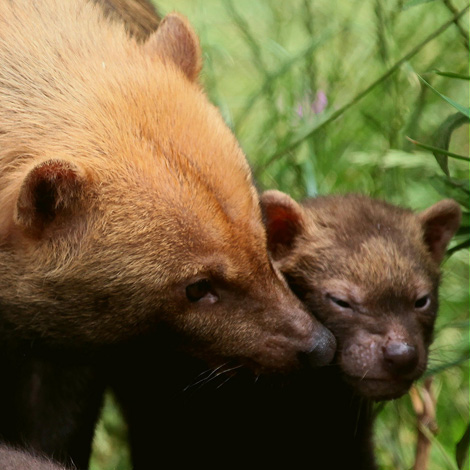 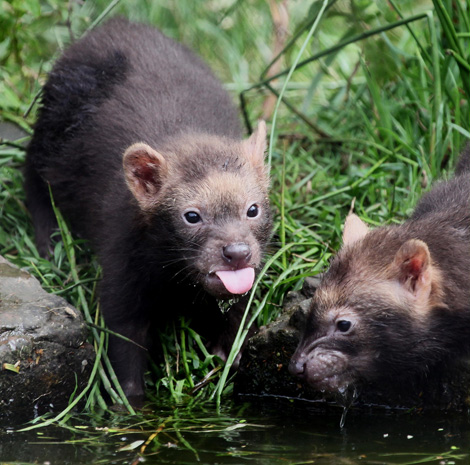 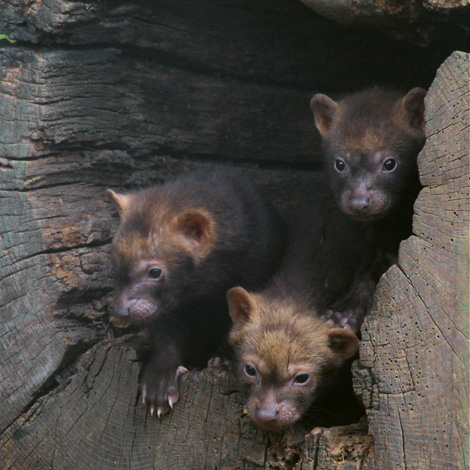 More pics below the fold... 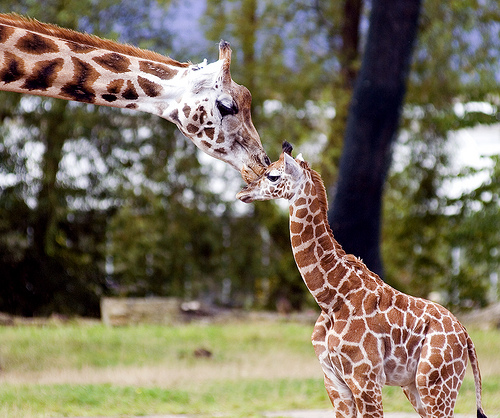 A lion tailed macaque mom and child snuggle up 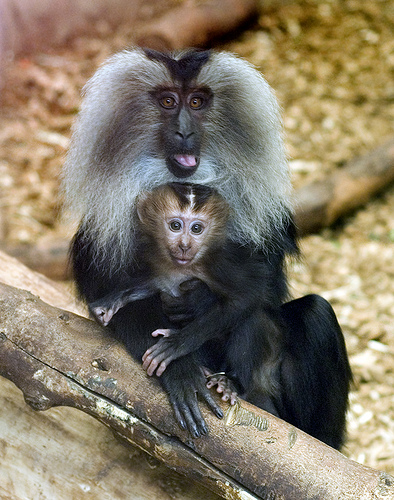 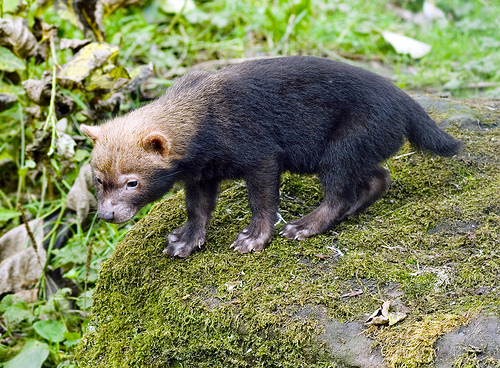 A spectacled owl mother and baby... 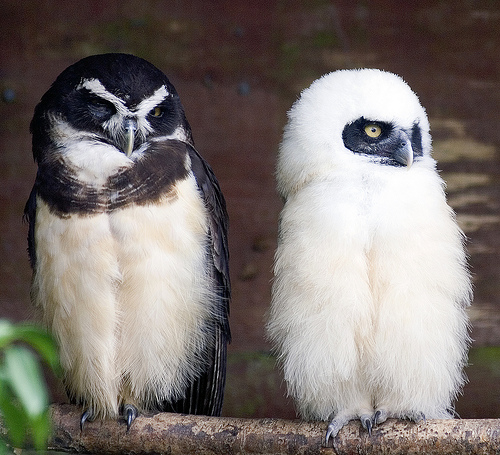