On Sunday, April 4, 2021, a healthy white rhinoceros calf was born at Royal Burgers’ Zoo in Arnem, The Netherlands. The male is the fourth offspring for this experienced mother and was born at 7:44 am on Easter Sunday. Burgers’ Zoo has been particularly successful in breeding white rhinoceroses and has ranked among the top five European Zoos for breeding them in recent years. 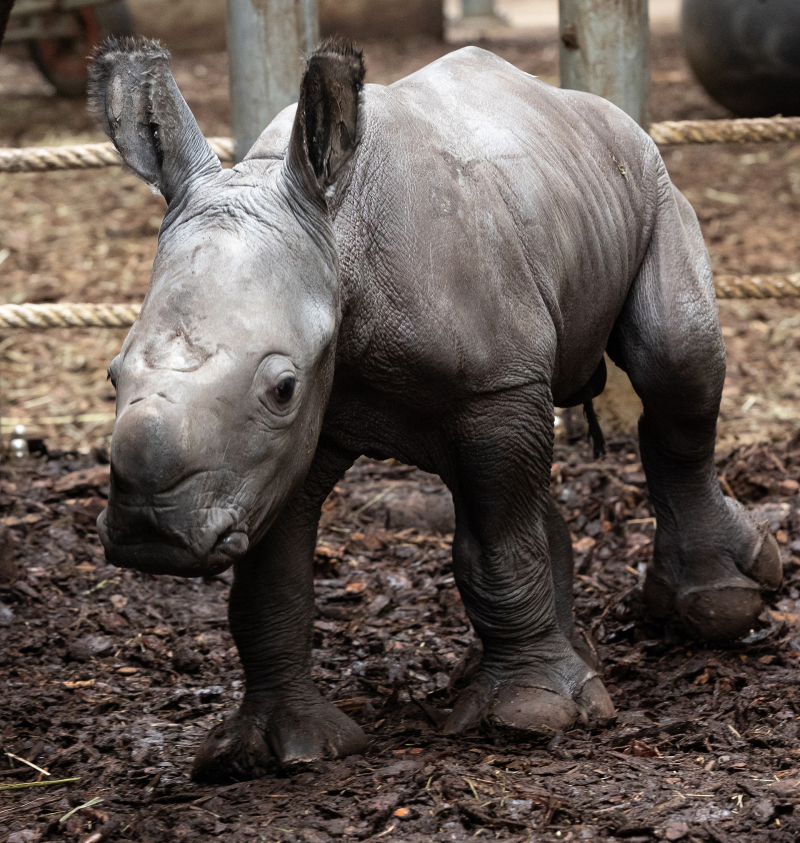 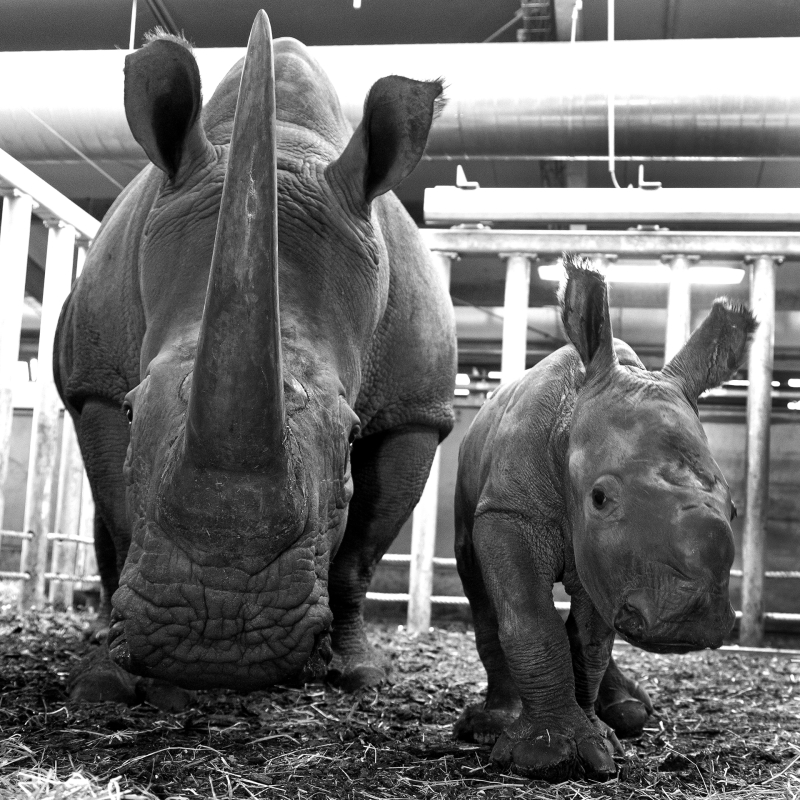 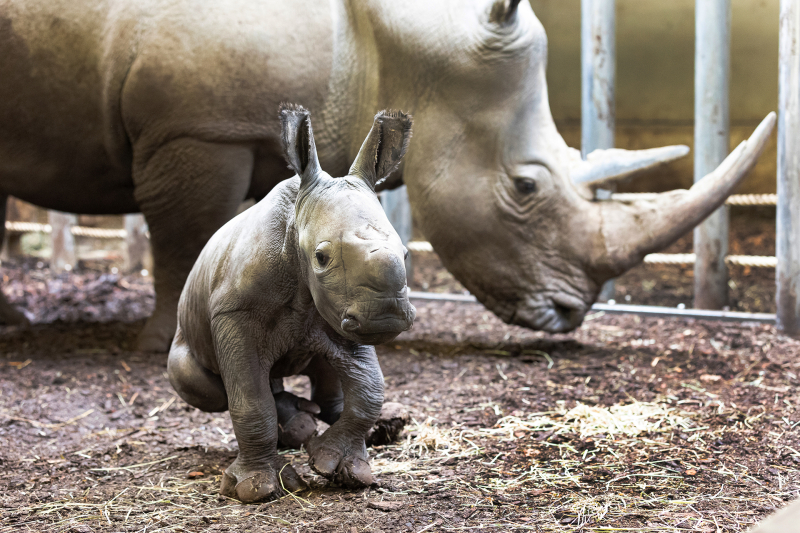 The birth went smoothly. At birth, baby a white rhinoceros weighs an average of 50 to 60 kilos. They grow very fast during the first days of life, its body weight increasing by 1.5 to 2 kg a day.

The calf’s 17-year-old mother traveled from Kolmarden, Sweden to Arnhem in 2013. In Sweden, the then young female was still living alongside her mother, which most likely explains why she failed to reproduce there. Biologists see this more often in white rhinoceroses.

Anticipating Easter weekend, zoo keepers at Royal Burgers' Zoo (Arnhem, The Netherlands) treated eight lions to an unusual form of behavioral enrichment. Especially the five lion cubs welcomed the unfertilized swan's eggs as a tasty addition to their normal meals, whereas the male lion seemed to prefer a juicy piece of meat.

Although in nature in most cases the lionesses hunt, the male lion is the first one to feed after the lionesses have managed to kill a prey. At Royal Burgers' Zoo, zoo keepers scatter pieces of meat through the enclosure, so that all lions can feed at the same time after the male lion has claimed the largest piece for itself. In nature, an adult male protects the pride against potential threats and keeps rivals at bay, which attempt to take its throne.

Currently, the lion family living in the Safari of Burgers' Zoo counts eight animals in total: an adult male, two adult females and five cubs in different ages. On 27th July 2020, a lioness gave birth to twins: a male and a female. On 26th November 2020, the other lioness gave birth to triplets: all of them are females. All five cubs will remain in Arnhem for the coming years. In time, the young male will become a rival of its father. At that time, either the adult male, or the young male will have to move to another zoo. In nature, at this point in time, father would simply chase its own son away from the pride.

Healthy and lively lion cubs are preventively vaccinated against cat flu, dewormed and weighed by the zoo vet at Royal Burgers' Zoo

Arnhem, 4th February 2021 - Thursday 4th February 2021 in the early morning, zoo vet Henk Luten preventively vaccinated lion triplets against cat flu at Royal Burgers' Zoo, Arnhem, The Netherlands. The healthy and lively lion cubs were also dewormed and weighed, seizing the opportunity. Very soon the triplets and their mother will be introduced to the other lions in Arnhem: an adult male, a second adult female and two other slightly elder cubs. In total, eight lions will inhabite a large outdoor enclosure.

The lion triplets were born in Arnhem on 26th November 2020. At 9.5 weeks of age, they received their second and last vaccination against cat flu this morning. All three cubs are female and will remain in Burgers' Zoo for the next couple of years. One of the two elder cubs is a male, the other one is a female. In order to prevent inbreeding, the adult male will probably move to another zoo in a couple of years.

Nowadays, breeding lions in zoos is common practice. In the 1960s, however, Royal Burgers' Zoo was world-famous in breeding lions, whereas other zoos were less successful. Already in 1965, one thousand lion cubs had been born in Arnhem! Even the famous roaring 'Leo the Lion' (1957 - until now) of MGM Studios in the USA was born in Royal Burgers' Zoo. Times have changed and zoos nowadays work internationally closely together, sharing experience and know-how easily and readily amongst colleagues. Breeding lions is very successful in zoos at the moment. In nature, lion populations have dropped dramatically in recent decades, unfortunately: WWF estimates a decrease of approximately 40%!

The first days of life are often critical for large predators, which is why Burgers' Zoo initially provided the animals with as much peace, quiet and space as possible to ensure minimal disturbance.

Arnhem's pride has one adult male and two adult females. One of the lionesses gave birth to twins on 27 July 2020: a male and a female. With the birth of the triplets on 26 November 2020, there will soon be five lion cubs on display at Burgers' Zoo. However, the three newcomers will spend the next few weeks behind the scenes in a separate enclosure with their mother.

Even an iconic predator such as the lion, with few natural enemies other than humans, is becoming less and less common on the African savannahs. Loss of habitat, illegal hunting for trophies or traditional medicine, and human-animal conflict are taking their toll: the number of lions in the wild is drastically decreasing.

Yesterday morning a newborn Grant’s Zebra was born in the stables of the Safari at Burgers’ Zoo. Instinctively, the newborn baby stood up almost immediately to take its first wobbly steps. The foal was immediately taken outside with the family the same day. The mother helped by gently pushing her baby with her head in the right direction. The foal is most likely a female.

Already on its first day of life, the youngster is allowed to enter the large savannah plains, where the newborn zebra cautiously encounters the other inhabitants: giraffes, rhinos and various antelope species, such as wildebeests, and waterbucks. Its mother is very vigilant and protects the baby. Although many people think of zebras as similar in tmperment to horses, they are really wild animals that can kick and bite!

Burgers’ Zoo is home to a herd of Grant’s zebras numbering sixteen individuals. Burgers' Zoo is very successful with the breeding of Grant’s zebras. On average, four to five young are born each year, depending on the number of adult mares living in the herd. This newborn is the third zebra foal of the year. Two foals have already been born this year. 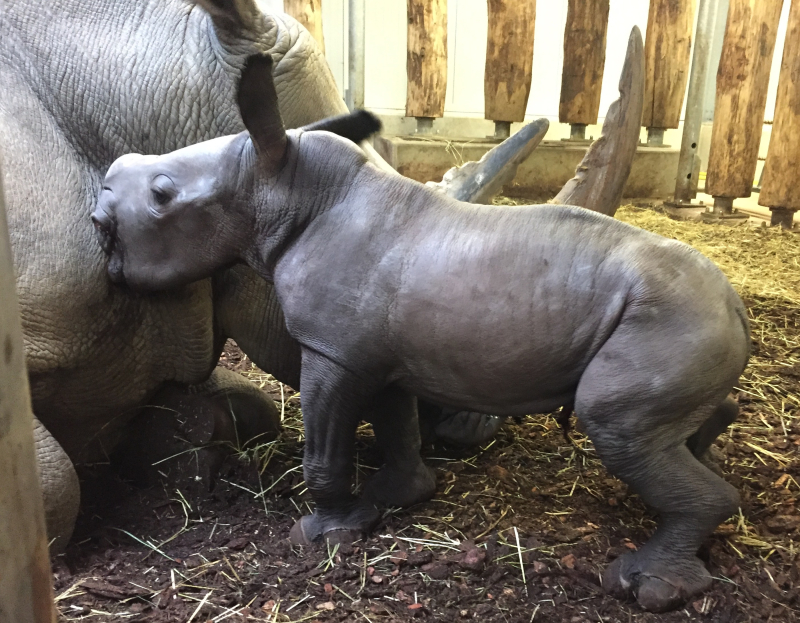 On August 15, a White Rhinoceros calf was born at Royal Burgers’ Zoo. According to keepers, the young bull calf is in good health.

Since 2002, the Arnhem zoo has been remarkably successful at breeding Rhinoceros: as many as ten Rhinos have been born in the capital of the province of Gelderland, including one stillbirth. A total of 269 White Rhinoceros live in European zoos: 116 bulls and 153 cows. On average, only ten are born each year in Europe. 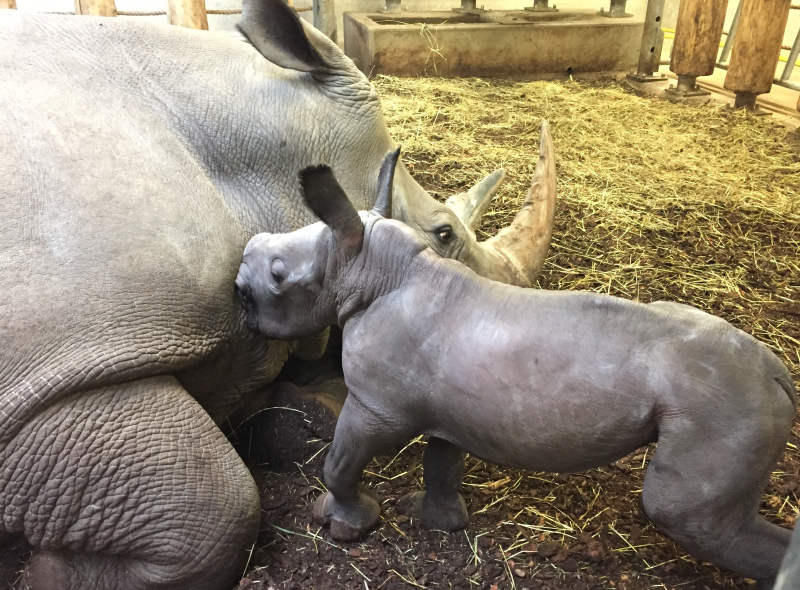 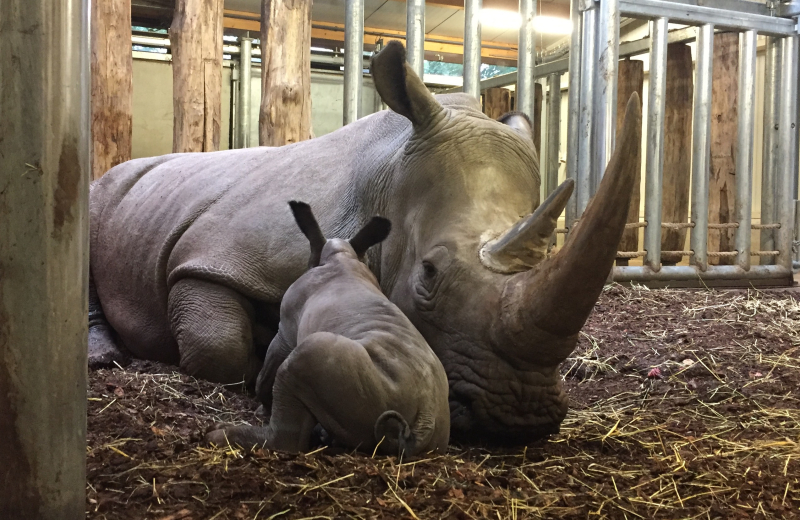 According to the Zoo, there are several factors that create challenges for breeding success. Not all adult Rhino bulls are fertile, and Rhinoceros cows often develop cysts in the uterine horns. As a result, the sperm can no longer reach the egg, or the egg cannot come loose from the ovary. The cysts can also block the egg from passing through the fallopian tube, or the fertilized egg from nestling in the uterine wall. Young cows being hormonally suppressed by their mothers is another problem zoos face. In this situation, the young cows only become fertile after being transferred to another zoo, which lifts the oppression.

Of the five Rhinoceros species alive today, the White Rhinoceros (also known as ‘Square-lipped Rhinoceros’) has the most social behavior. Whereas the other four Rhino species live in solitude and only temporarily visit each other during mating season, Square-lipped Rhinoceros live in small herds of adult cows and their young. As a rule, the cows in these herds are closely related. The bulls live alone and demarcate their territory by depositing dung piles along the borders as scent flags.

To ensure successful breeding of Square-lipped Rhinoceros (Ceratotherium simum), it is beneficial, given their natural behavior and social group structure, for the animals to have plenty of space at their disposal, so that they can avoid each other or, on the contrary, visit each other. In Arnhem, the breeding bull lives a more or less solitary life, usually avoiding the company of the cows and their young. In the mating season, the bull will seek contact. Burgers’ Zoo has a fertile bull and two cows, both of which have given birth multiple times. 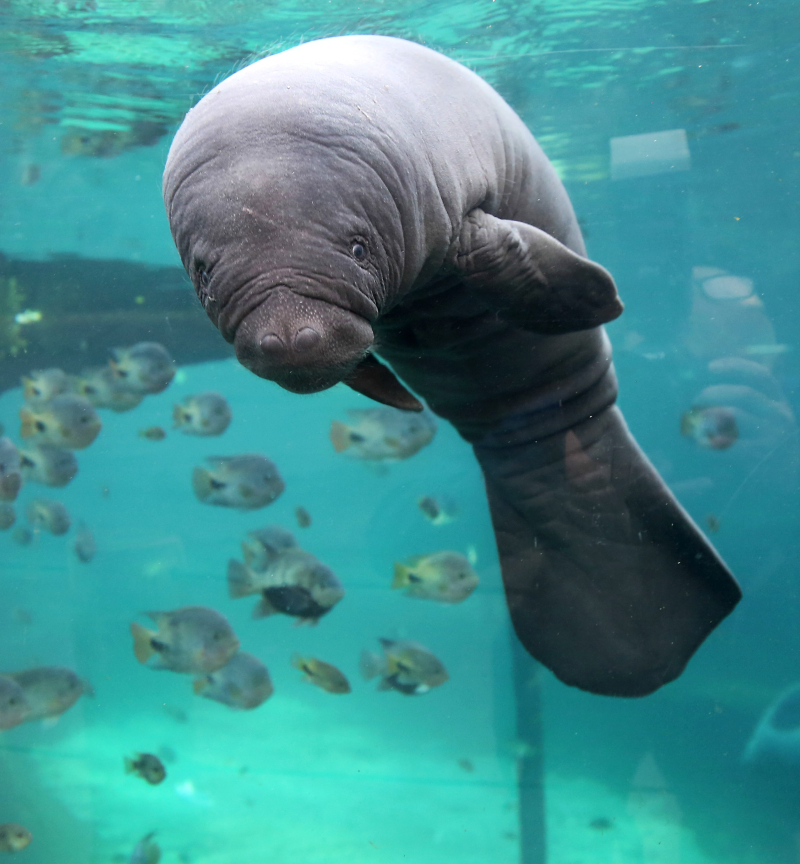 The Manatee care team at Royal Burgers’ Zoo in the Netherlands was in suspense for weeks awaiting the birth of a baby West Indian Manatee. Then, early in the morning of March 19, the waiting was over: a healthy baby was born. 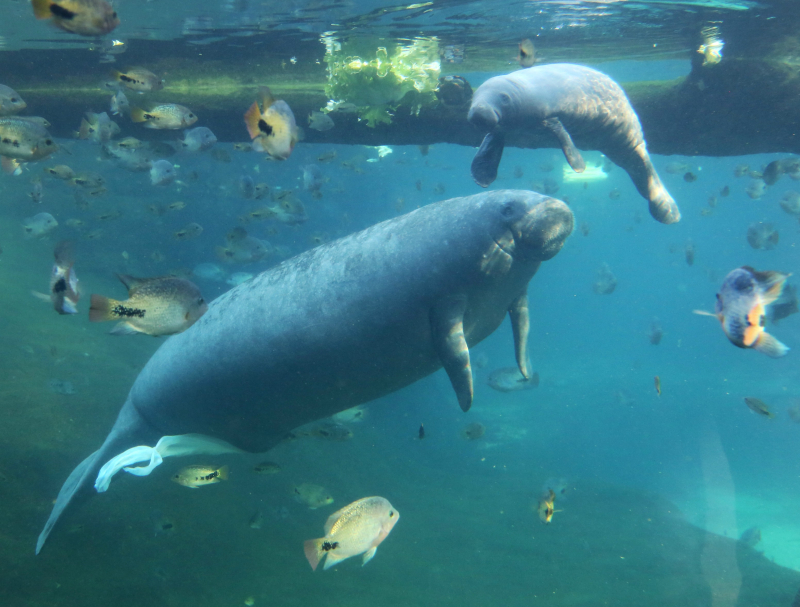 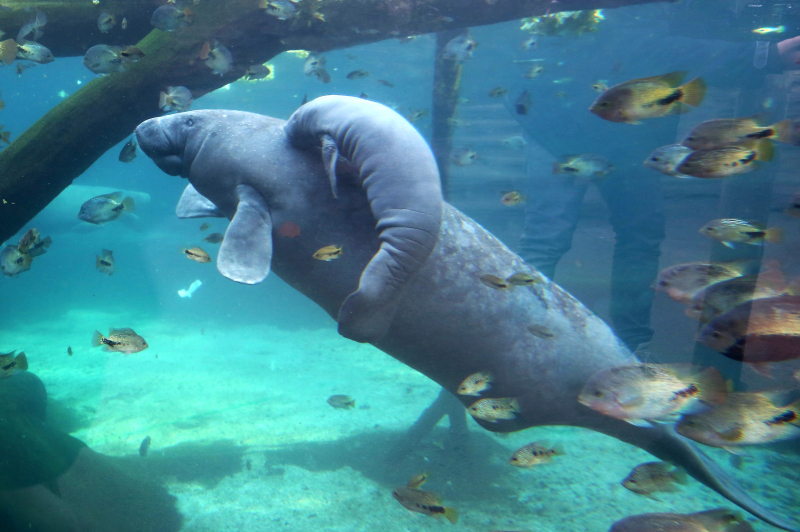 At about five-and-a-half years old, the new mom is a first-time mother. Due to her inexperience, the care team is paying extra attention to how she tends to her newborn. So far, she appears to be caring for her baby properly. Manatees are mammals, and like all mammals, mothers provide milk for their young. Female Manatees’ nipples are located in the “armpits” just under the front flippers. The care team has seen the baby nursing regularly.

Burgers’ Zoo is the only zoo in the Netherlands to house Manatees.

Manatees are pregnant for about 12-14 months. There are a few outward signs when the female nears the end of her pregnancy, but these can last for weeks and are quite variable. Conducting an ultrasound on a marine mammal like a Manatee (which can weigh more than 1,000 pounds) is not practical. The care team knew they simply had to be vigilant and patient while awaiting the birth.

The newborn’s gender has not been confirmed, but the care team suspects it is a male. Manate calves nurse for up to two years, but they will nibble on solid foods, such as leafy vegetables, when they are just a few weeks old. In the wild, Manatees feed on plants, such as sea grasses, that grow in freshwater and saltwater environments.

Native to the Caribbean Sea and the eastern coastlines of North and South America, West Indian Manatees are listed as Vulnerable by the International Union for Conservation of Nature. Just 50 years ago, there were only a few hundred Manatees remaining. Collisions with boats were a frequent cause of harm to Manatees. Today, Manatee populations have recovered and there are more than 6,000 individuals

Two seven-month-old Sri Lankan Leopard cubs at Burgers' Zoo in the Netherlands showed off their climbing skills on a new video released by the zoo. The cubs' antics were captured by a Go-Pro camera mounted at the top of the rope.

You last saw the cubs, a male and a female, playing with their mother in the maternity den last summer.

The playful duo are an important part of efforts to protect this rare Leopard subspecies, which is classified as Endangered by the International Union for Conservation of Nature (IUCN).  Sri Lankan Leopards are one of nine Leopard subspecies and are found only on the island of Sri Lanka, which lies off the eastern coast of India.

Burgers' Zoo has a successful history of breeding Sri Lankan Leopards, and the offspring produced here help to maintain a genetically diverse population within European zoos. 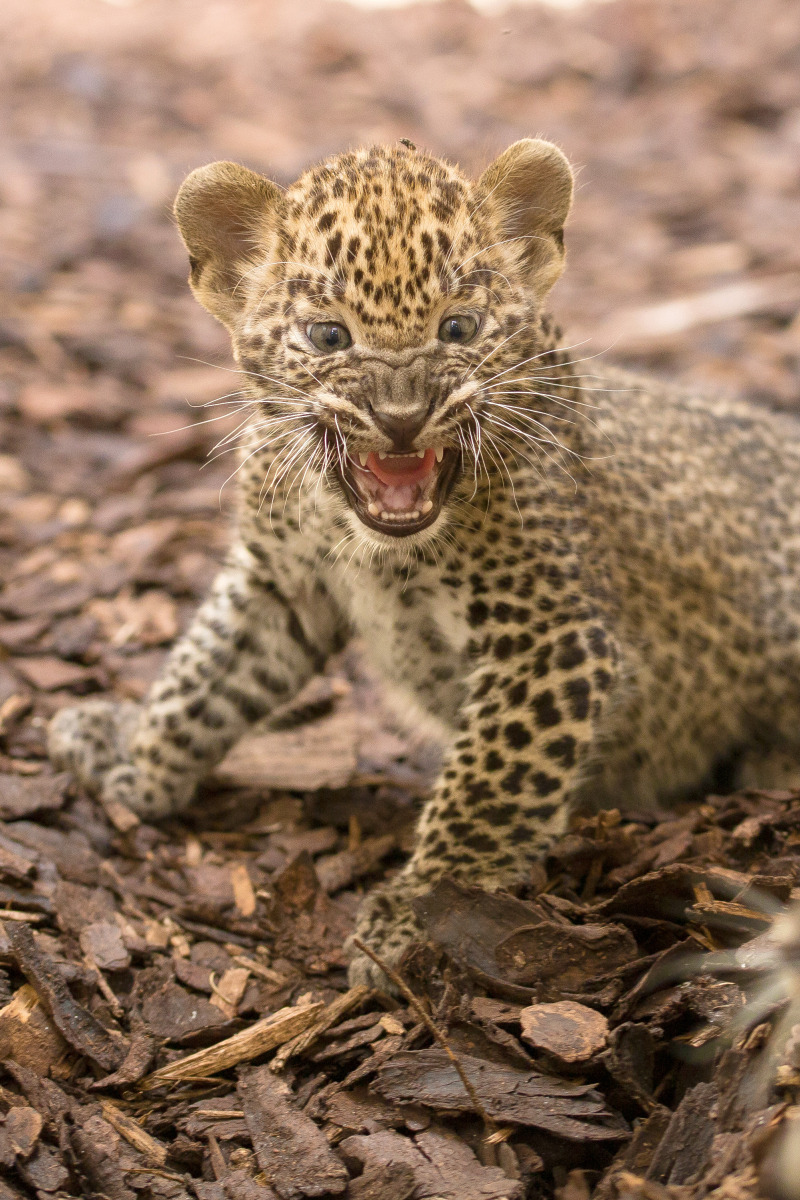 The footage shows the two-month-old cubs, a male and a female, climbing on their mother and jostling for a prime nursing spot on mom’s belly.  The family has access to a spacious outdoor habitat but still spends a great deal of time in the cozy maternity den. 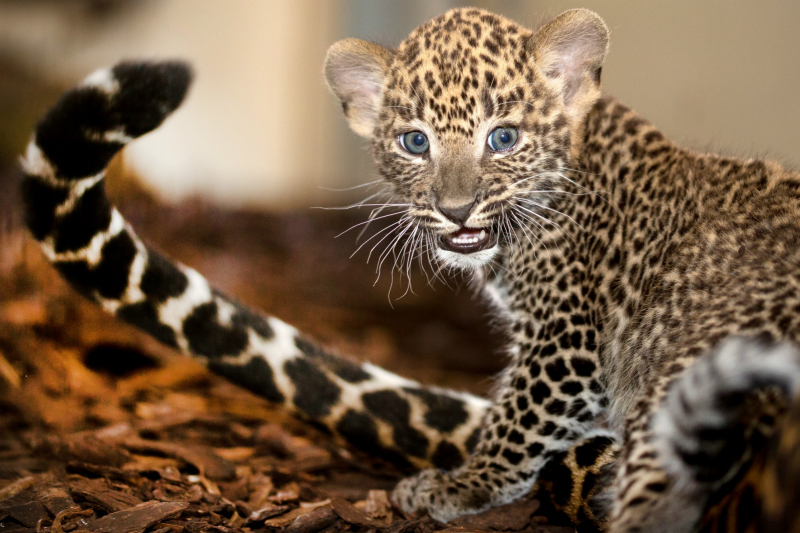 The cubs’ first veterinary exam, which was covered last month on ZooBorns, showed that the cubs are healthy and strong.

Burgers’ Zoo has had great success breeding these rare Leopards and participates in the European Endangered Species Programme (EEP) of EAZA zoos (European Association of Zoos and Aquaria). Both parents are genetically valuable to the breeding program because they represent a new bloodline. This helps to keep the European zoo population as genetically diversified as possible.

See more photos of the cubs below.