Baby Rhino Update! Buffalo Zoo’s baby rhino's well over 200 lbs and beginning to explore outside with mom. She has a ton of energy, and her keepers say she is pretty fearless! She still doesn't have a name, but Buffalo Zoo will have some info on that soon, so stay tuned. As for when she will be out for public view, it is all very weather-dependent. Buffalo Zoo will update and let the public know, via social media, on days when she will be out. Watch the video to learn more about the last few weeks behind the scenes with mom and baby! 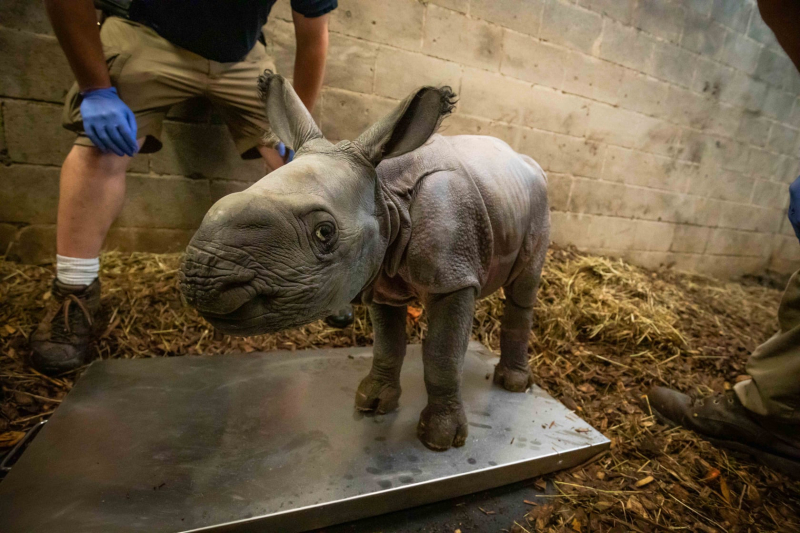 Animal care and veterinary teams got their first look at the calf early Saturday morning, where she received her first physical exam. This included weight, checking her vitals, cleaning her belly button (umbilical cord attachment site), and bloodwork. She came in at a whopping 130 lbs! Over the last few weeks, the team has closely monitored Tashi and the calf. So far, mom and calf are doing great.

The cub’s arrival day is extra special as they were born on their dad Tiberius’s eighth birthday.

The Zoo’s animal care team began monitoring Lusaka closely in the days before her giving birth.

As the keepers started their day on March 7, she went into labor.

Right now, the babies are behind-the-scenes bonding and nursing with mom.

The veterinary team got their first look at the cubs; they were healthy, growing, and weighed seven pounds each.

Over the coming weeks, the Buffalo Zoo community will have a lot of lion fun together!

Stay tuned to their social media channels and sign-up for e-mail alerts so you don’t miss updates on their public debut, gender reveal, and names!

The cub’s arrival day is extra special as they were born on their dad Tiberius’s eighth birthday. 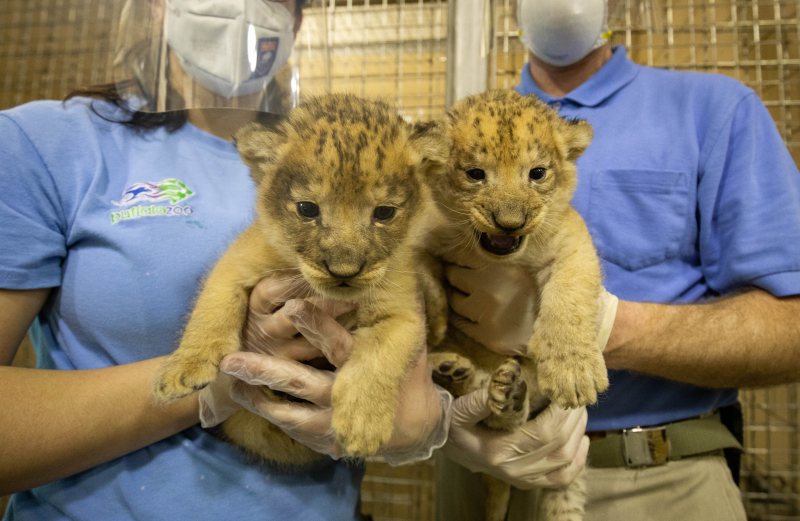 The Zoo’s animal care team began monitoring Lusaka closely in the days before her giving birth.

As the keepers started their day on March 7, she went into labor.

Right now, the babies are behind-the-scenes bonding and nursing with mom.

The veterinary team got their first look at the cubs; they were healthy, growing, and weighed seven pounds each.

Over the coming weeks, the Buffalo Zoo community will have a lot of lion fun together!

Stay tuned to their social media channels and sign-up for e-mail alerts so you don’t miss updates on their public debut, gender reveal, and names!

Ocelot Kitten Starts the New Week with a New Name 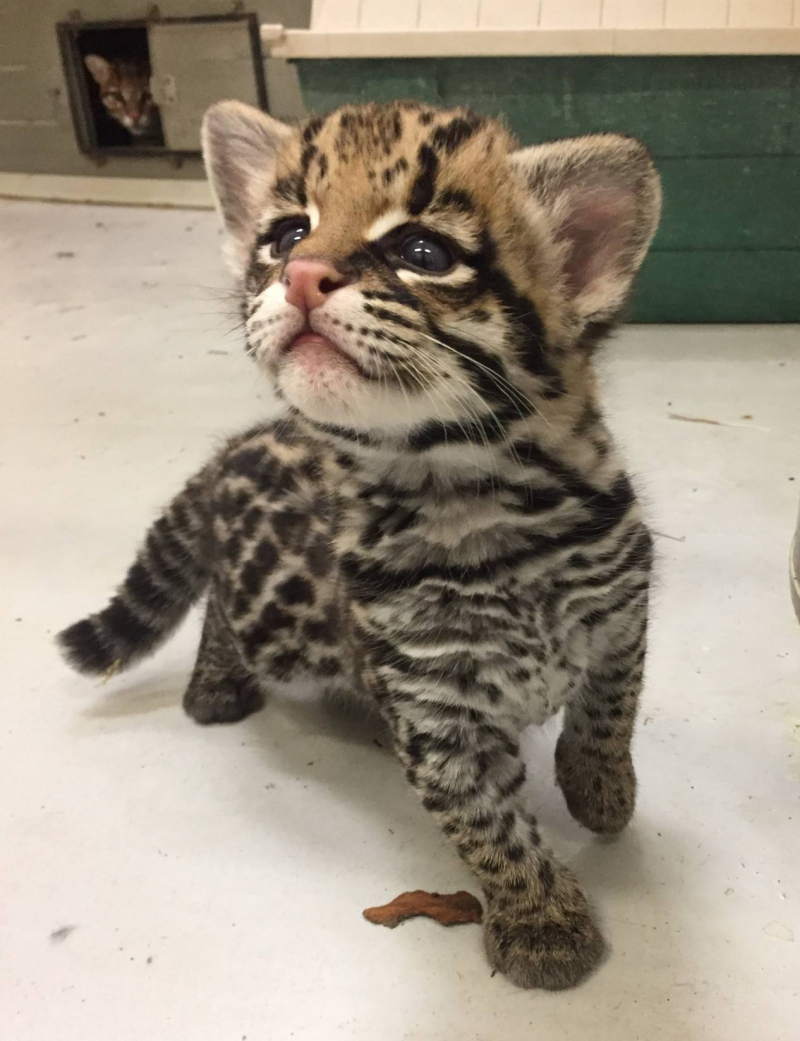 The Buffalo Zoo recently announced the birth of their newest Brazilian Ocelot kitten. The adorable little male was born on November 17 to mom, Ayla (age 6), and dad, Pedro (age 12).

The Zoo has been sharing sweet videos, via social media, of the new guy at play, but one thing has been missing…a name! Keepers compiled a list of four potential names and recently asked the public to assist in the voting. The four possible monikers were: Javiar, Nico, Pablo, and Tacito.

The contest recently ended, and the final votes were tallied. The winning name, with 68% of the votes, is…Nico! 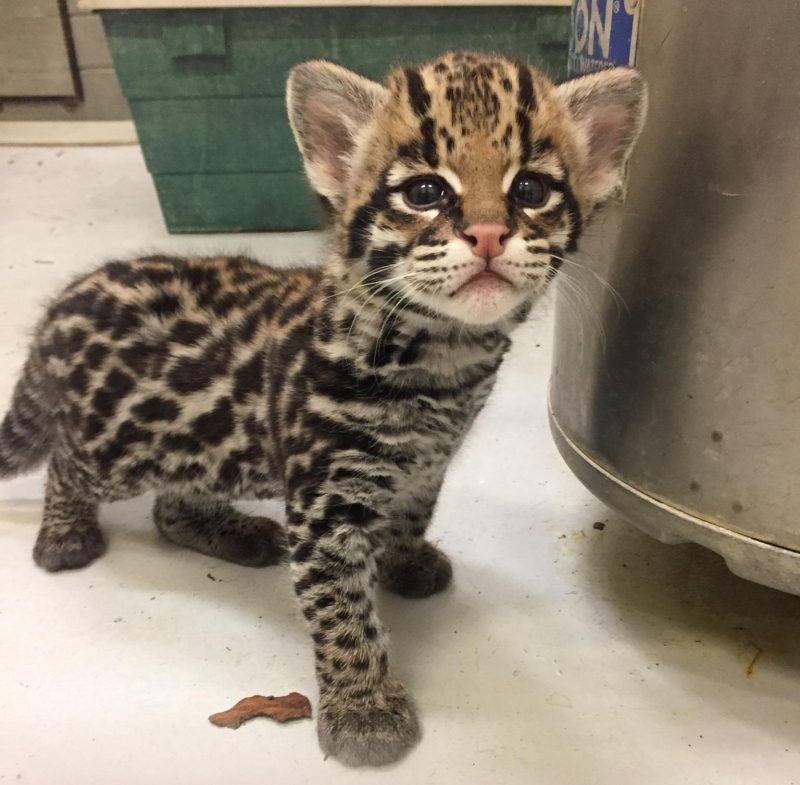 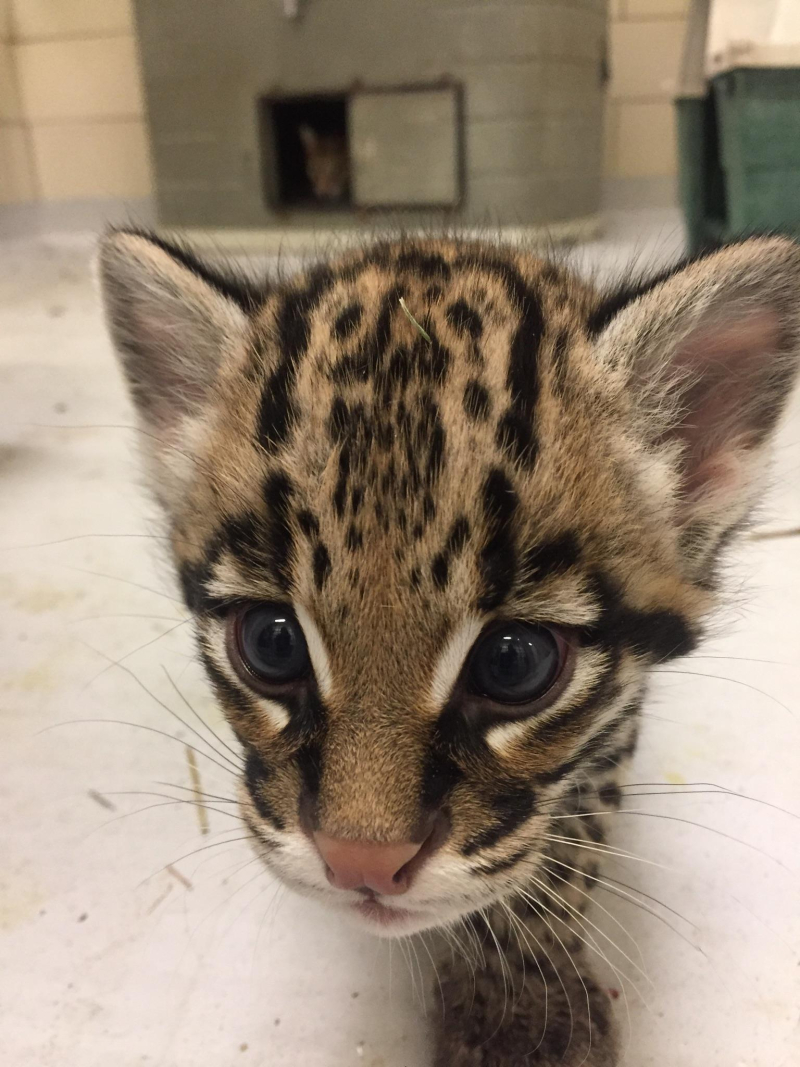 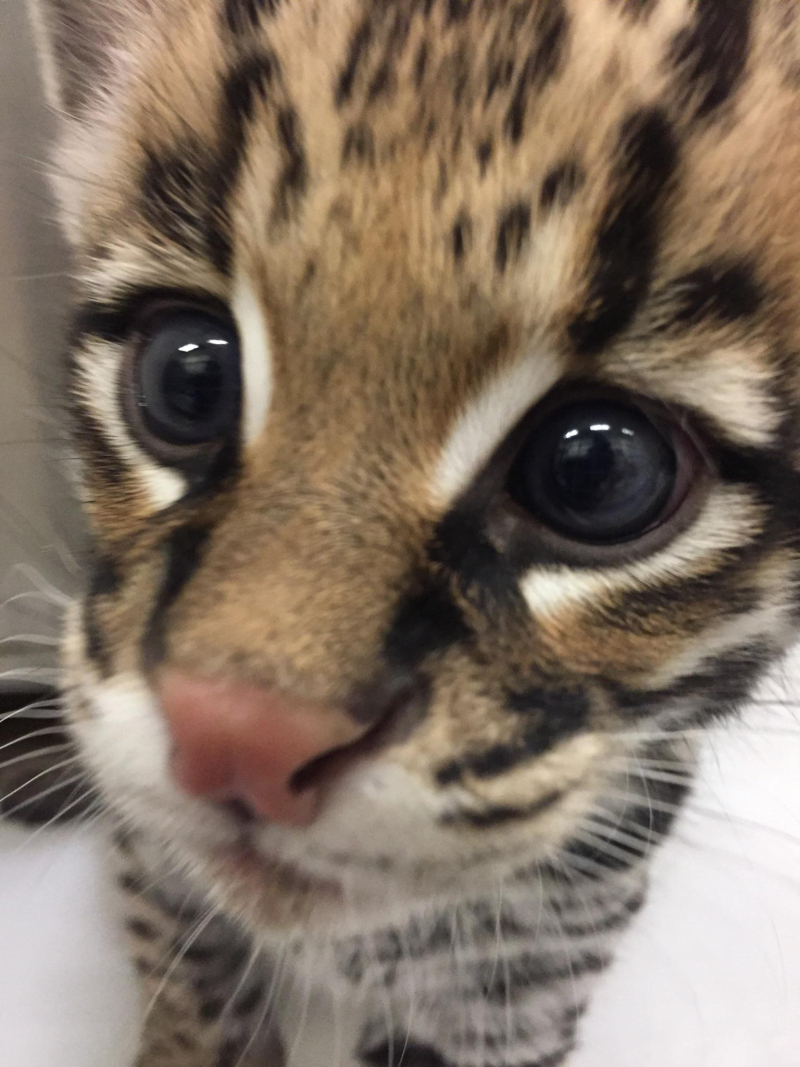 Nico is the second kitten born to Ayla and Pedro. Their first offspring was born in 2013.

Learn more about Nico’s mom Ayla, and the work being done to help save this beautiful species, in this past ZooBorns article: “Brazilian Ocelot Births Help Conservation and Research” . 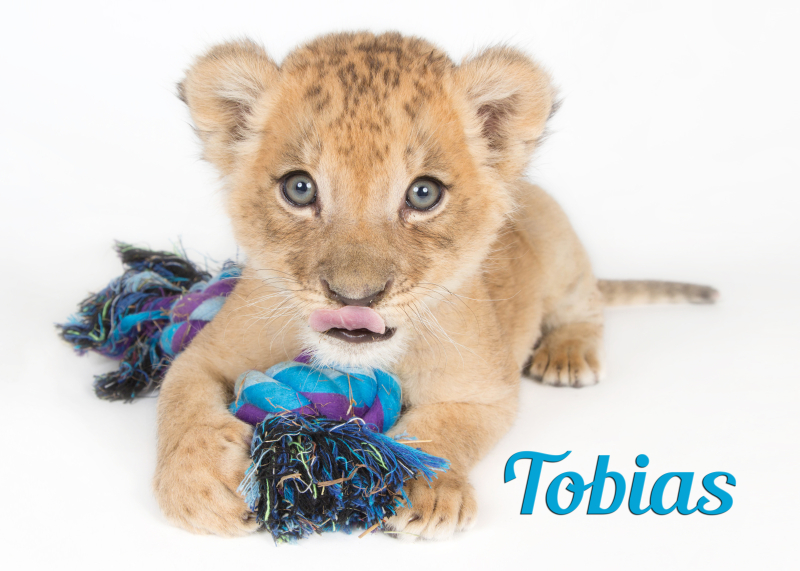 An African Lion cub born March 5 made his public debut alongside his dad on Father’s Day at the Buffalo Zoo.

The Buffalo Zoo’s staff had been preparing for this day ever since little Tobias was born to first time parents Lelei and Tiberius. 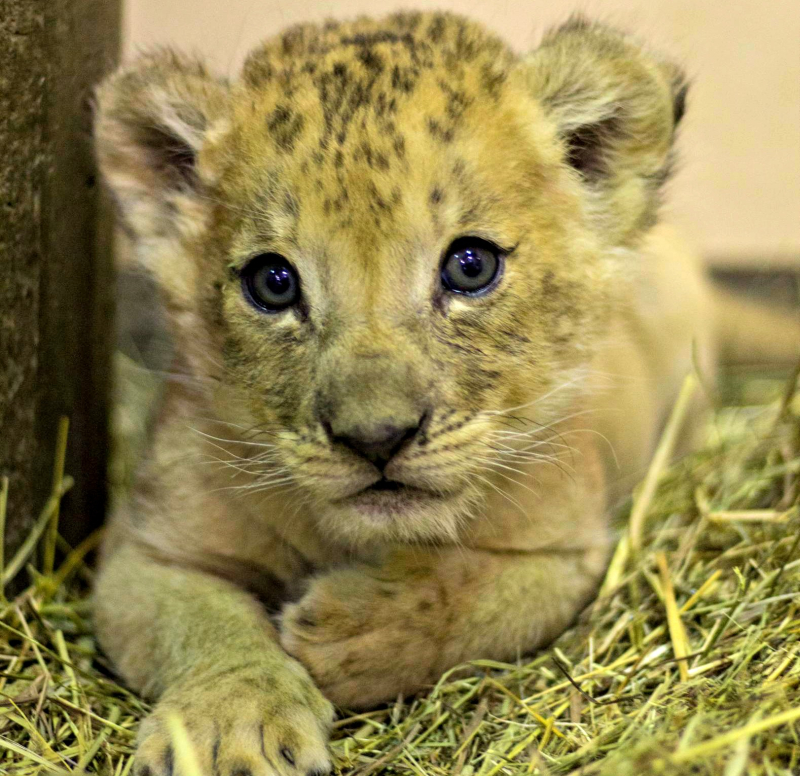 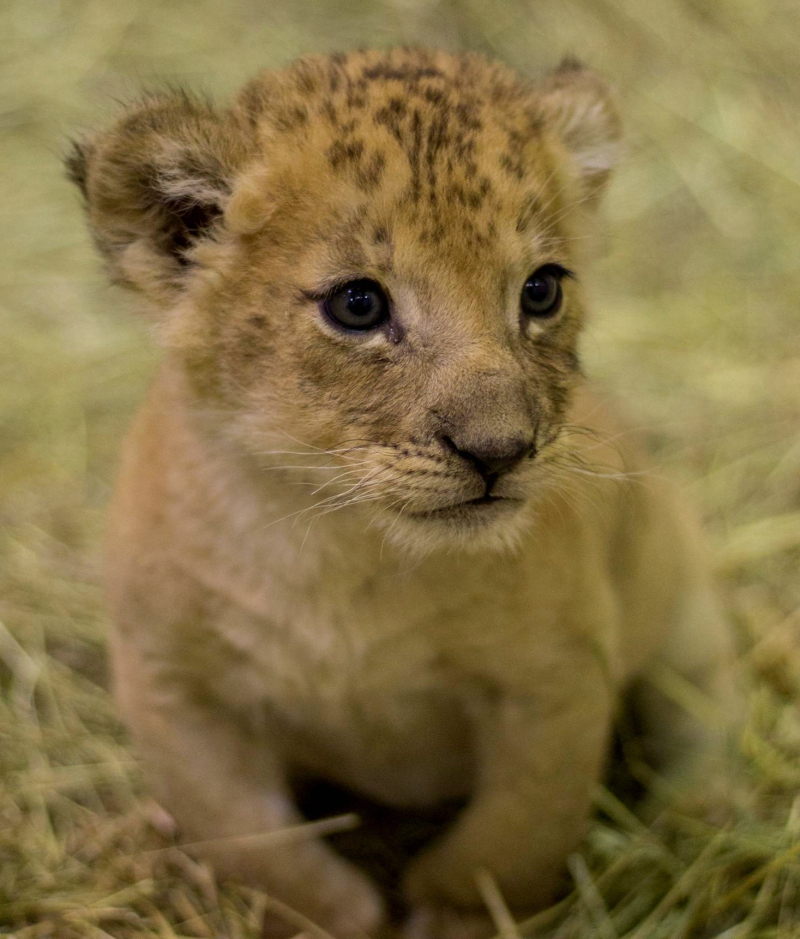 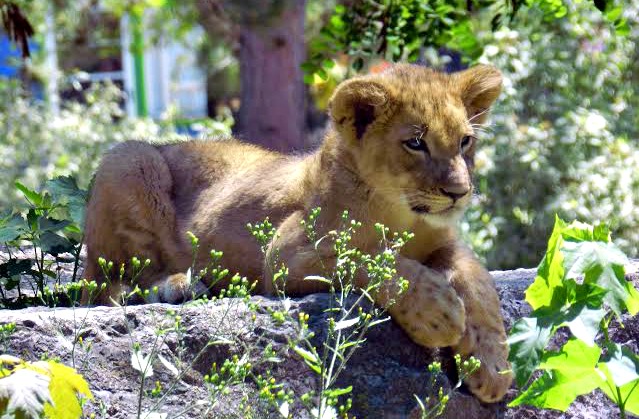 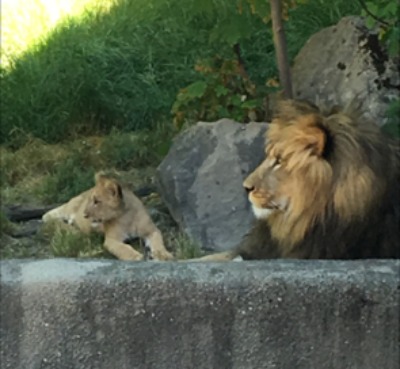 Like all Lion cubs, Tobias spent his first weeks in the den with his mother.  By the time Tobias was a few months old, the staff began allowing him to explore the Lion habitat early in the morning or in the evening, when zoo guests were not in the park.

Lion cubs can be clumsy, so keepers wanted to make sure Tobias could navigate the Lion exhibit safely.  Once Tobias was comfortable in the exhibit, he was joined by his mother on his after-hours adventures.  Later, keepers allowed Tiberius to join mother and cub.

Tobias is the first Lion cub to be reared at the Buffalo in 25 years.

In the wilds of Africa, Lions are considered Vulnerable to Extinction by the International Union for Conservation of Nature.  Because their wild habitat has been altered by humans and prey has becomes scarcer, African Lion populations have fallen by more than half since the 1990s.  Captive breeding programs in zoos are important tools for securing the future of the species. 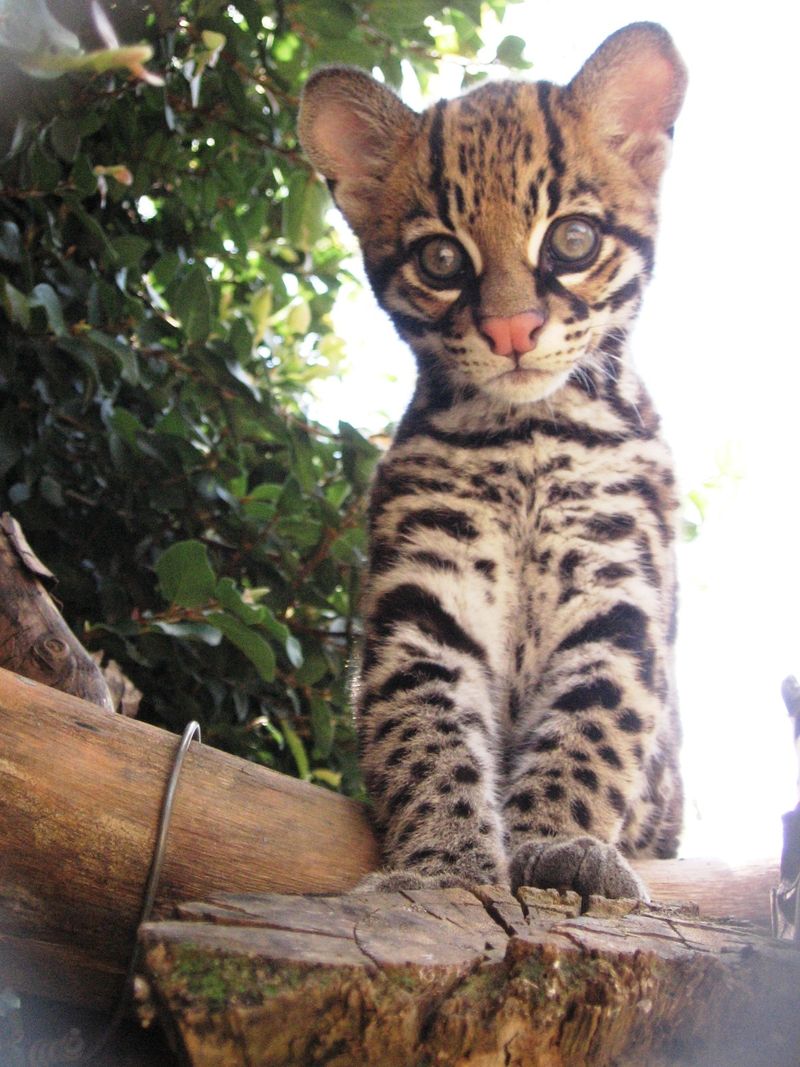 All three of these genetically valuable Ocelots have gone on to produce offspring of their own as a result of natural breeding. The most recent kitten was Neto who was born to Revy at the Santa Ana Zoo in December. Revy is the last of the three AI offspring to reproduce. 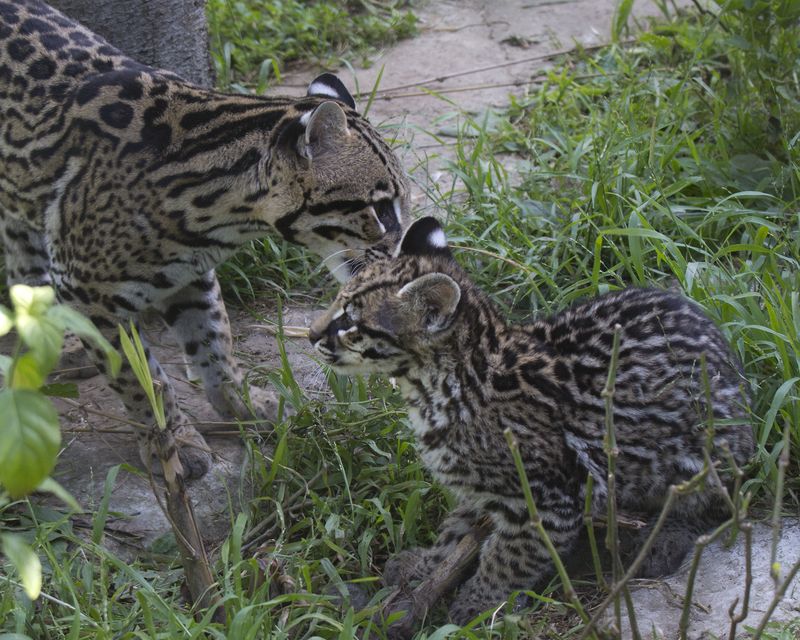 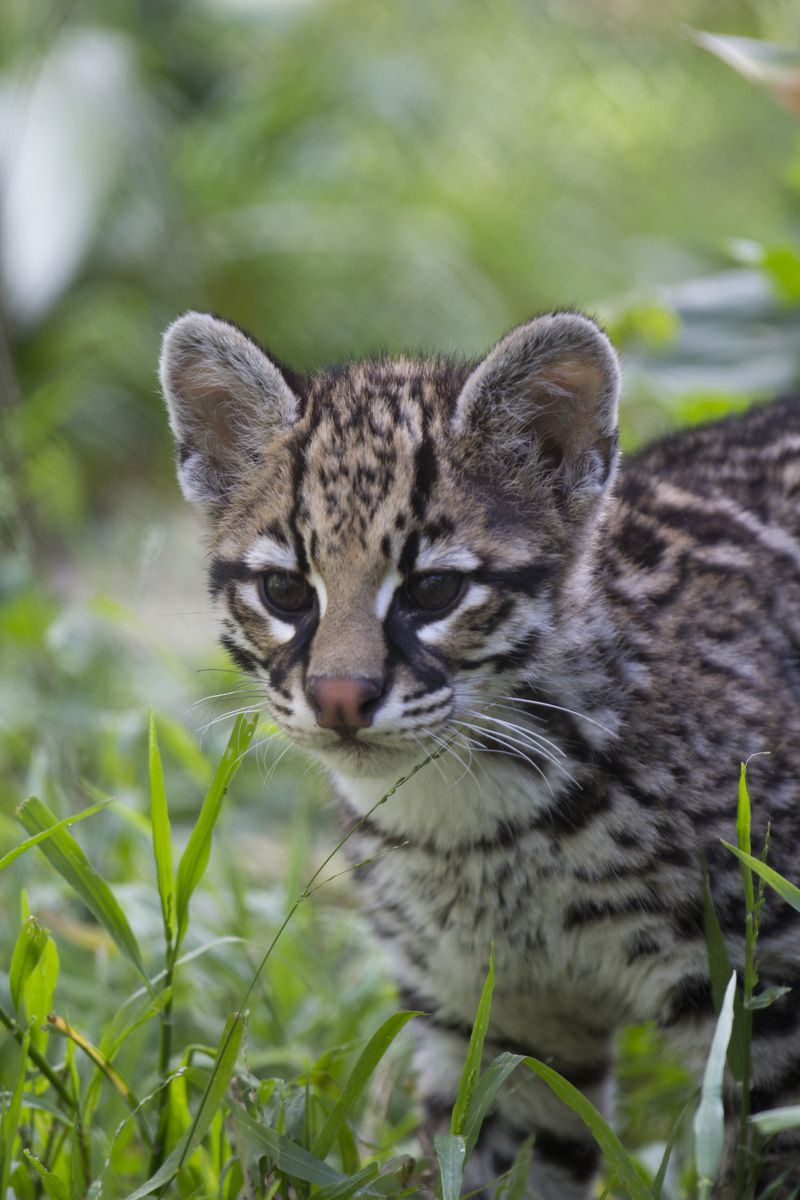 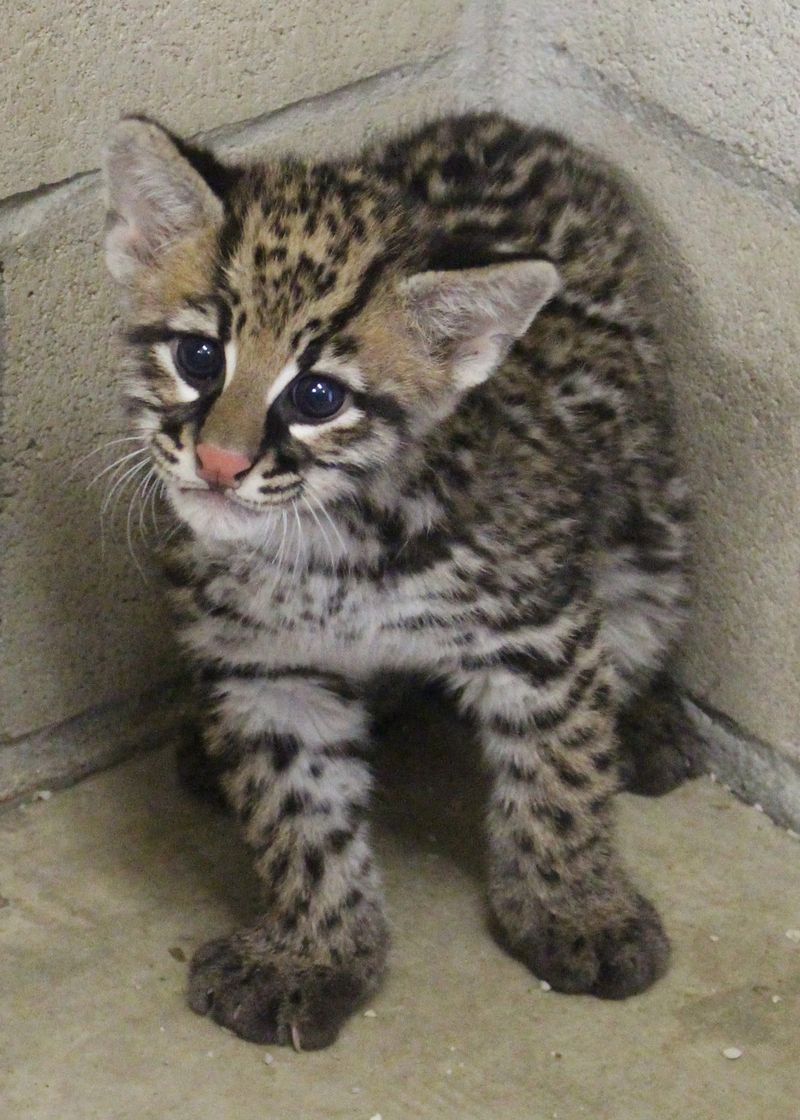 “Without the AI option, Milagre, Ayla and Revy – and all of their subsequent offspring - would have never existed and the long-term genetic viability of our Brazilian Ocelot population would have been further diminished as a consequence,” said Dr. Bill Swanson, CREW’s Director of Animal Research and one of the world’s authorities on breeding endangered small cats. “Only 30 Brazilian Ocelots exist in North American Zoos, and seven, or nearly one quarter of the population, were born as a direct or indirect result of AI. That’s strong evidence that biotechnology can play a major role in species conservation.”

In October of 2014, on a recommendation from the Ocelot Species Survival Plan (SSP), which makes breeding pairings based on each individual’s genetic importance to the population as a whole, Revy moved from the Cincinnati Zoo, where she was born, to the Santa Ana Zoo to breed with “Diego,” a male from Oklahoma City Zoo. Because Diego’s parents were imported from Brazil to the United States in 2006 (a process that took six years to plan & execute), Diego’s genetic lineage was considered critically important to establishing a sustainable, genetically viable population.

“Revy and Diego are both extremely valuable to the Ocelot SSP due to the multiple founder lines they represent. The fact that they are compatible and have produced a kitten through natural breeding is a significant step toward conserving this species,” said Swanson. “Our objective is to use AI when necessary to produce offspring that then can breed on their own.”

The SSP’s goal is to increase the Brazilian ocelot population in North American zoos from 30 to 125 individuals. In some cases, however, the SSP’s carefully selected breeding pairs fail to reproduce naturally, sometimes due to behavioral incompatibilities (as with Revy’s parents) or, occasionally, physical impairments (as with Milagre’s and Ayla’s mother).

Dr. Swanson has also aided in AI procedures on tigers, lions, and leopards, in the past few years. “We have become the go-to source for AI in cats, as well as rhinos and polar bears, because of CREW’s expertise and past success. All cat SSPs have pairs that are not reproducing on their own for various reasons, so we try to help out with other cat species as much as possible,” said Swanson.

In cats, AI has been used to produce offspring in 12 species (tiger, snow leopard, cheetah, clouded leopard, leopard cat, ocelot, tigrina, fishing cat, Pallas’ cat, golden cat, leopard, puma), but half of those AI births consist of only a single pregnancy.   Historically, cheetahs have been most successful, with about 13 AI pregnancies produced since 1991 (but none since 2003) followed by the ocelot (with 5 pregnancies). 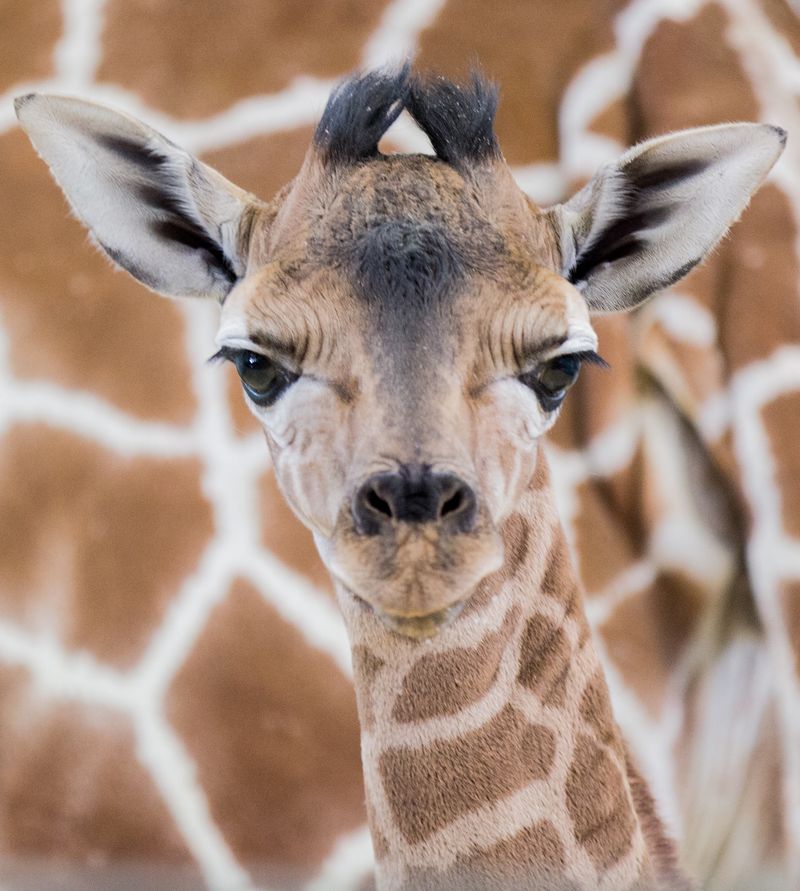 A female Reticulated Giraffe born at the Buffalo Zoo has been named Zuri, which means “lovely” or “beautiful” in Swahili. 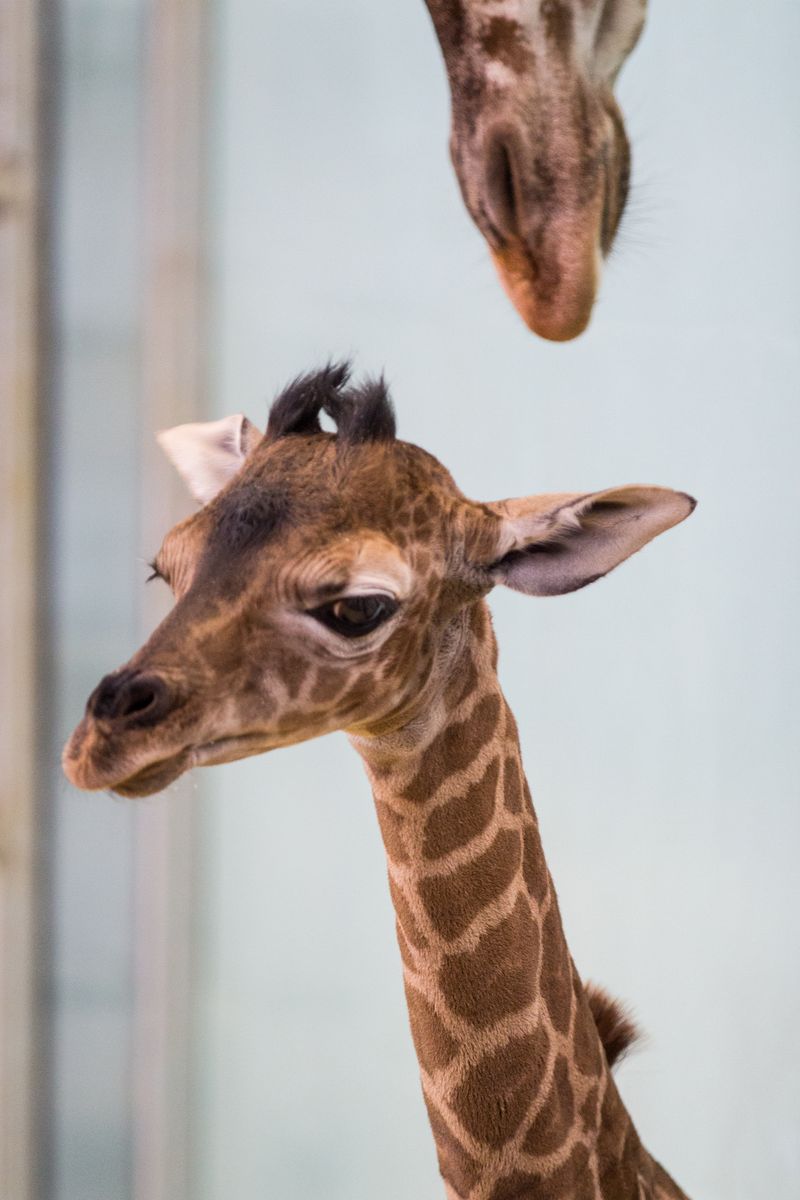 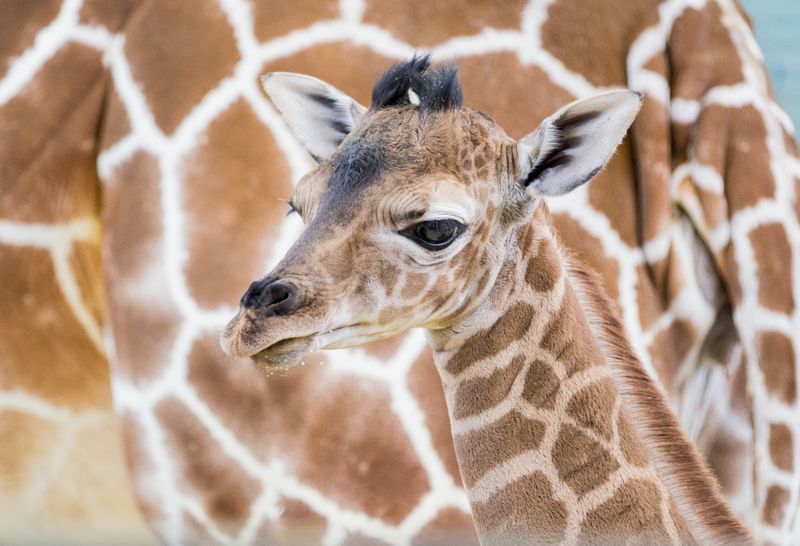 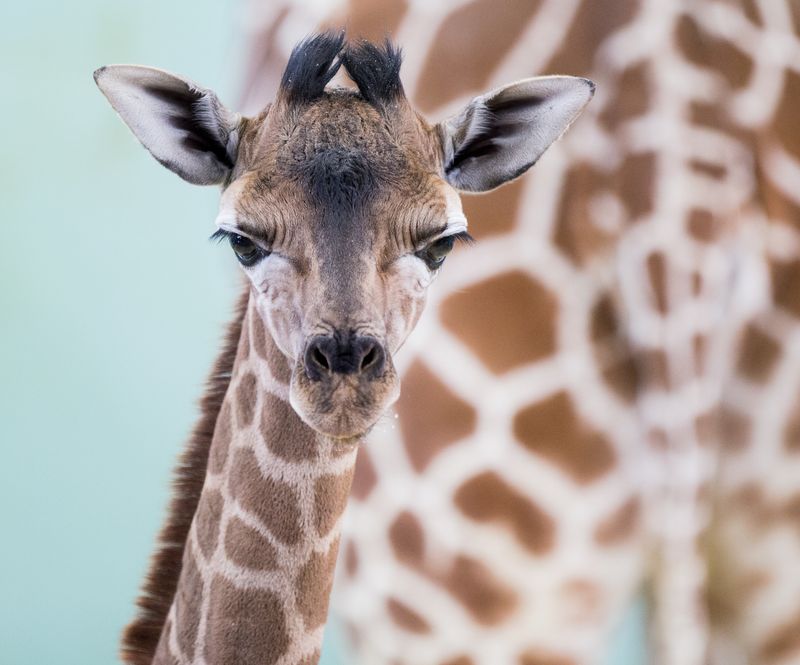 Zuri was born on February 21 to 20-year-old Agnes and 3-year-old Moke.  Giraffe mothers deliver their babies standing up, and the babies typically stand on their own within an hour of birth.

Giraffes are pregnant for around 15 months, and calves usually stay with their mothers for nearly two years.

On Africa’s plains and grasslands, Giraffe populations have fallen by nearly half since 1999 to about 80,000 animals today. (This figure includes all nine subspecies of Giraffes.)  However, as a species, Giraffes are not listed as Endangered – rather, they are classified as Least Concern by the International Union for Conservation of Nature.  Reticulated Giraffes, native to Kenya, number less than 5,000.   The world’s tallest animals face threats from disease, human encroachment, and illegal hunting.

See more photos of Zuri below. 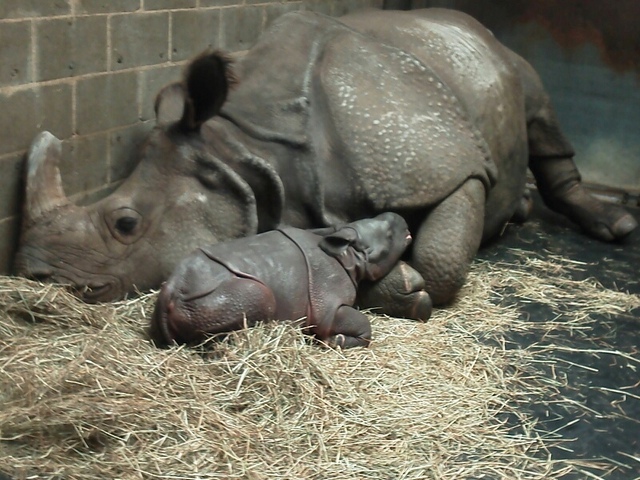 The Cincinnati Zoo & Botanical Garden’s Center for Conservation & Research of Endangered Wildlife (CREW) and the Buffalo Zoo are excited to announce the birth of a female Indian Rhino calf produced by artificial insemination (AI), and born on June 5. This is the first offspring for a male Rhino who never contributed to the genetics of the Indian Rhino population during his lifetime – a major victory for endangered species around the world and a lifetime of work in the making. 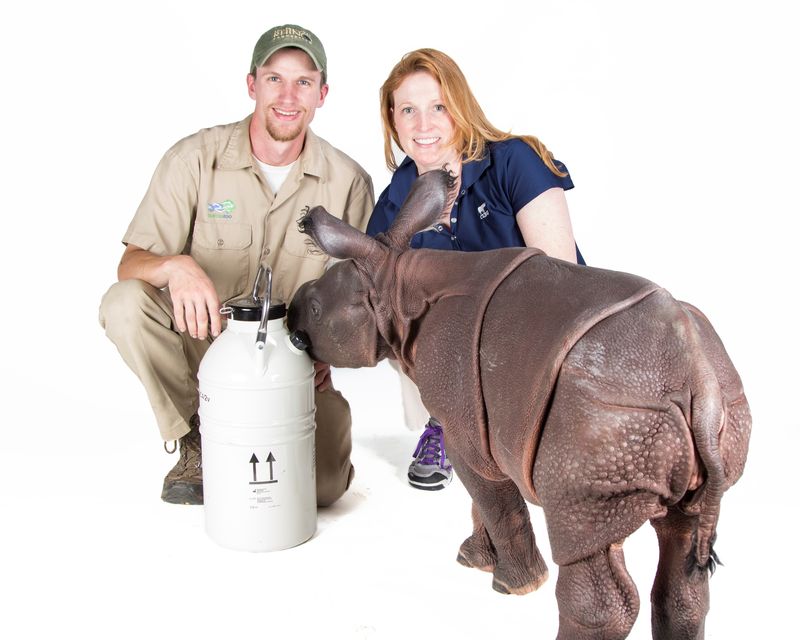 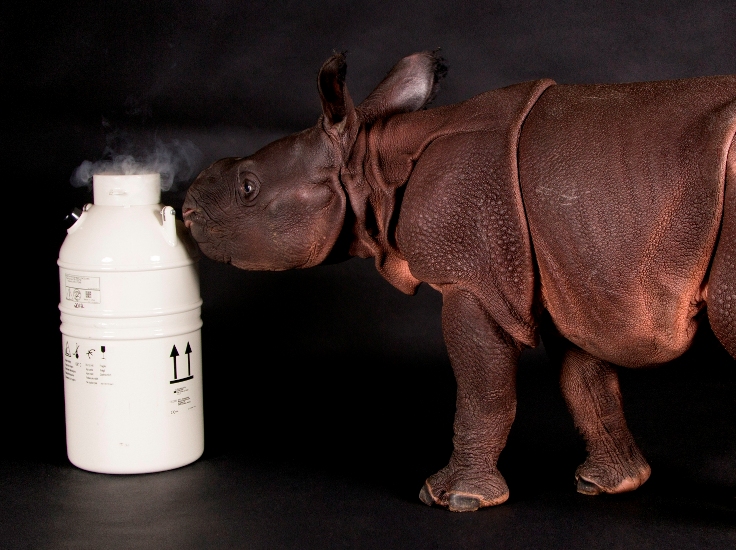 The father, “Jimmy,” died at the Cincinnati Zoo in 2004 and was dead for a decade before becoming a father for the very first time.  During those ten years, Jimmy’s sperm was stored at -320°F in CREW’s CryoBioBank™ (the white tank shown in these photos) in Cincinnati, before it was taken to Buffalo, thawed and used in the AI.

“We are excited to share the news of Tashi's calf with the world as it demonstrates how collaboration and teamwork among the Association of Zoos & Aquariums (AZA) organizations are making fundamental contributions to Rhino conservation,” said Dr. Monica Stoops, Reproductive Physiologist at the Cincinnati Zoo’s CREW. “It is deeply heartening to know that the Cincinnati Zoo's beloved male Indian Rhino Jimmy will live on through this calf and we are proud that CREW's CryoBioBank™ continues to contribute to this endangered species’ survival.”

Tashi, the Buffalo Zoo’s 17-year-old female has previously conceived and successfully given birth through natural breeding in both 2004 and 2008.  Unfortunately, her mate passed away and the Buffalo Zoo’s new male Indian Rhino has not yet reached sexual maturity. Because long intervals between pregnancies in female Rhinos can result in long-term infertility, keepers at the Buffalo Zoo knew it was critical to get Tashi pregnant again and reached out to Dr. Stoops for her expertise.

In February of 2013, Dr. Stoops worked closely with Buffalo Zoo's Rhino keeper Joe Hauser and veterinarian Dr. Kurt Volle to perform a standing sedation AI procedure on Tashi. Scientifically speaking, by producing offspring from non or under-represented individuals, CREW is helping to ensure a genetically healthy captive population of Indian Rhinos exists in the future.  This is a science that could be necessary for thousands of species across the globe as habitat loss, poaching, and population fragmentation (among other reasons) threaten many with extinction.

Read more about the Rhino calf's amazing story below.

Otter Pups Are a First for Buffalo Zoo 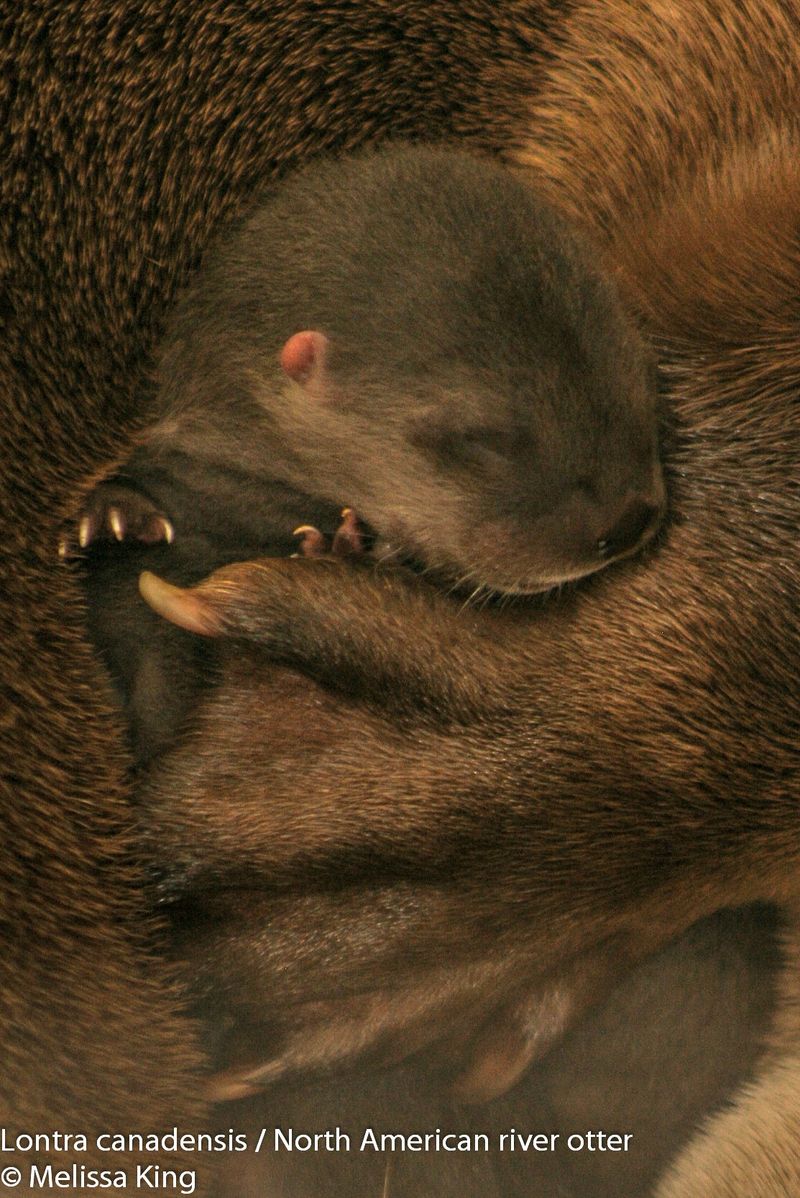 Two separate litters of North American River Otters were born at the Buffalo Zoo in early March – the first Otters ever born at the zoo. 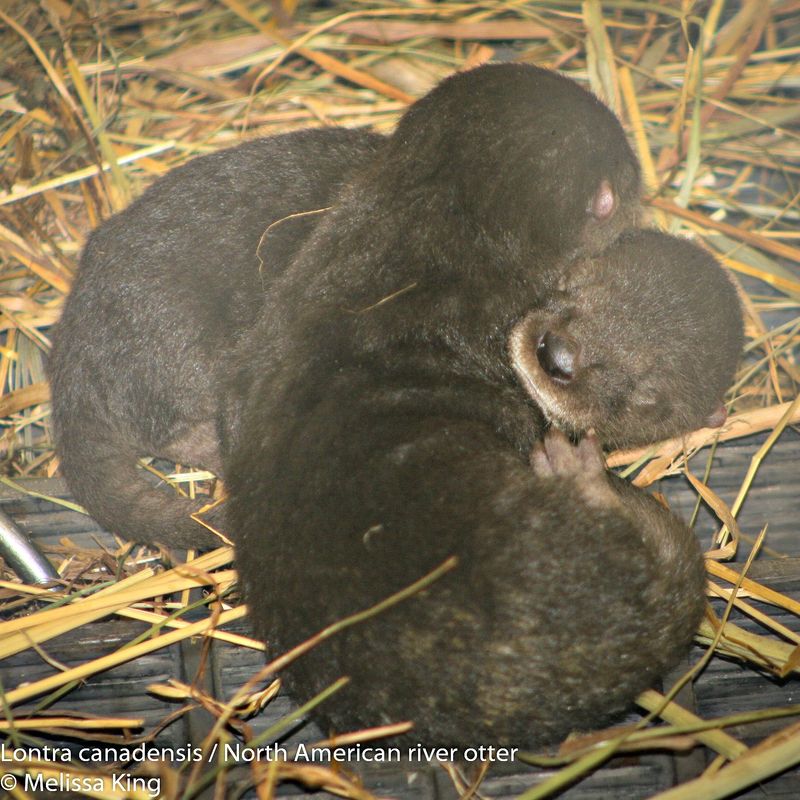 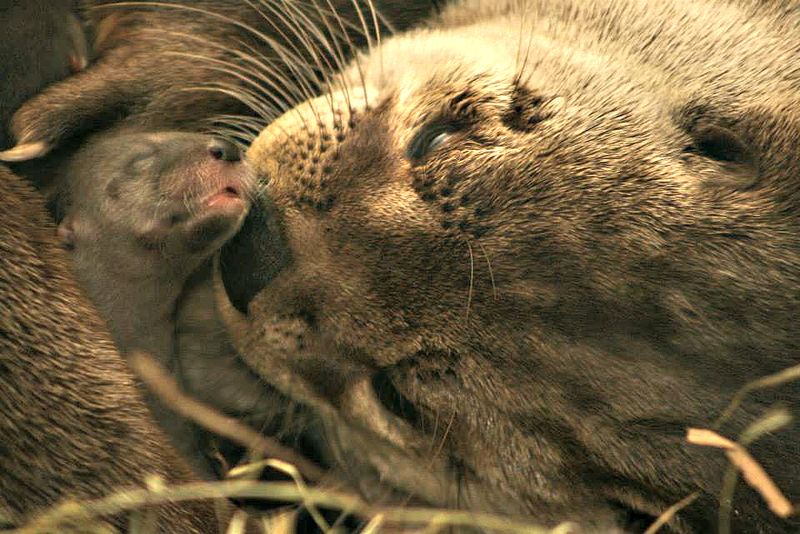 Nine-year-old sisters Daisy and Ellie are first-time mothers.  The father of both litters is a seven-year-old North American River Otter named Rascal, who arrived at the Buffalo Zoo in 2012 from the Trevor Zoo in Millbrook, NY.

Both Daisy and Ellie are proving to be attentive mothers and are behind the scenes in their dens. The pups are still too small to be on exhibit, but zoo officials expect them to be outdoors within a few weeks.

Agile swimmers, North American River Otters are native to rivers and streams throughout the eastern and western United States and Canada.  In the 20th century, River Otters were extirpated from parts of their range due to habitat loss. In other areas, Otters are plentiful enough to allow trapping.   Reintroduction programs have relocated otters and reestablished populations in areas where Otters had been eliminated.

Continue reading "Otter Pups Are a First for Buffalo Zoo" »