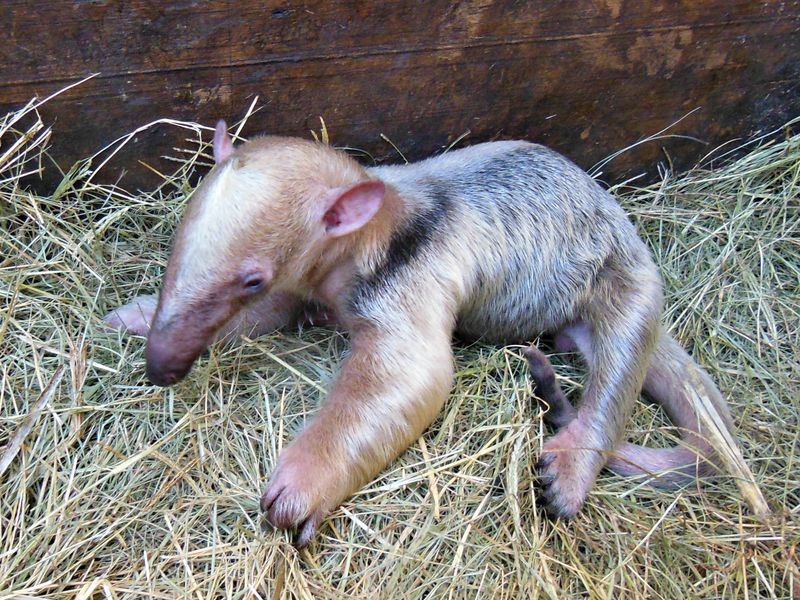 The second-ever Tamandua to be born in a Uruguayan zoo came into the world on February 27 at Bioparque M'Bopicuá.  Uruguay’s first captive-born Tamandua was also born at the Bioparque in September 2014. In the video below, the newborn calls to its mother, and she rushes over to check on her baby. 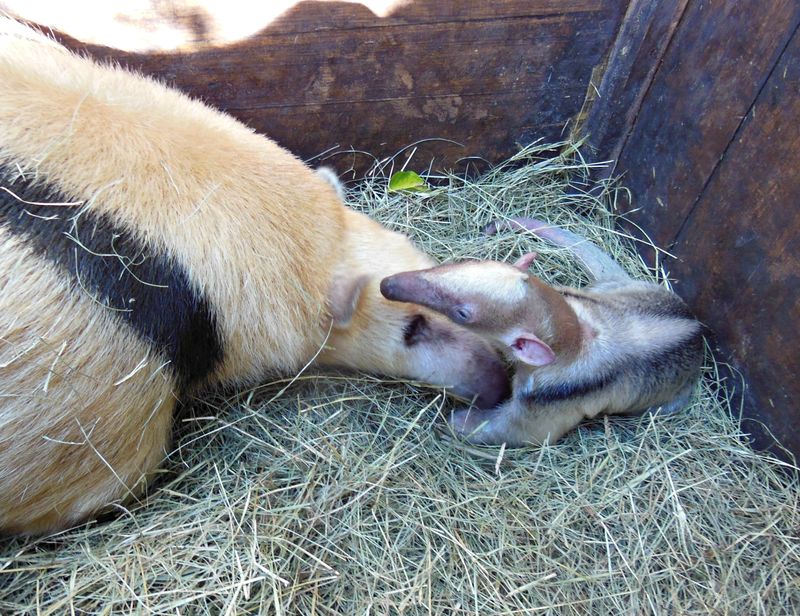 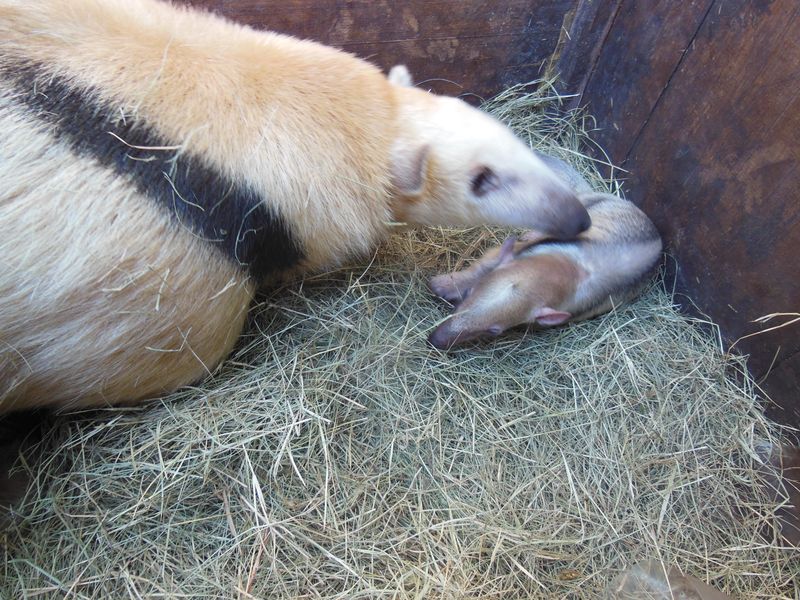 Also known as Lesser Anteaters, Tamanduas may look strange, but every body part has a purpose.  Their long snouts can poke into anthills or termite mounds, and their sticky, 16-inch-long tongues gather up insects.  Huge front claws tear open termite mounds and help Tamanduas climb trees, while prehensile tails help them hang on.

Tamanaduas are big stinkers – literally.  They spray a smelly substance that’s said to be four times as powerful as a skunk’s.   This powerful scent makes Tamanduas unappealing to predators like jaguars.

Baby Tamanduas are born after a five-month gestation.  Right from the start, the babies sport very large claws.  Babies ride on their mothers’ backs for the first few months of life. At this time, Tamanduas are plentiful in their home range in Central and South America. 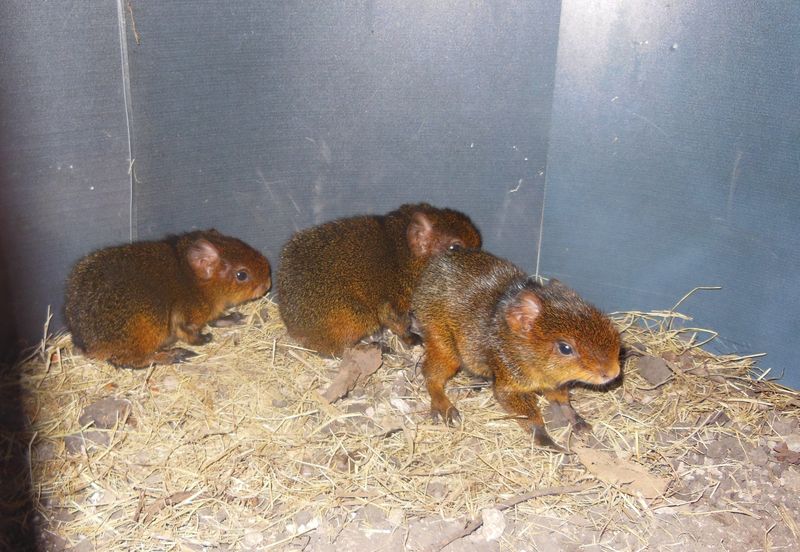 ZooBorns has more news to share from Bioparque M’Bopicuá, in Uruguay. A litter of three Azara’s Agouti was born at the park on October 30th! 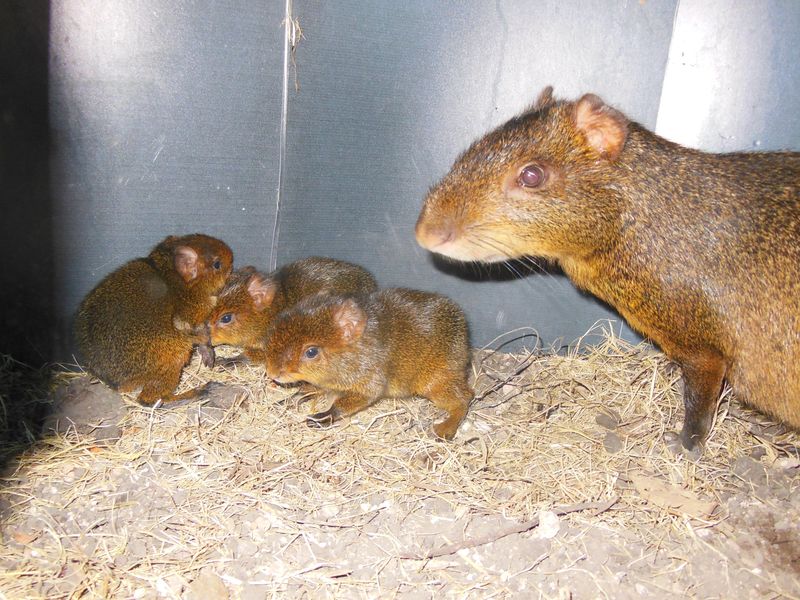 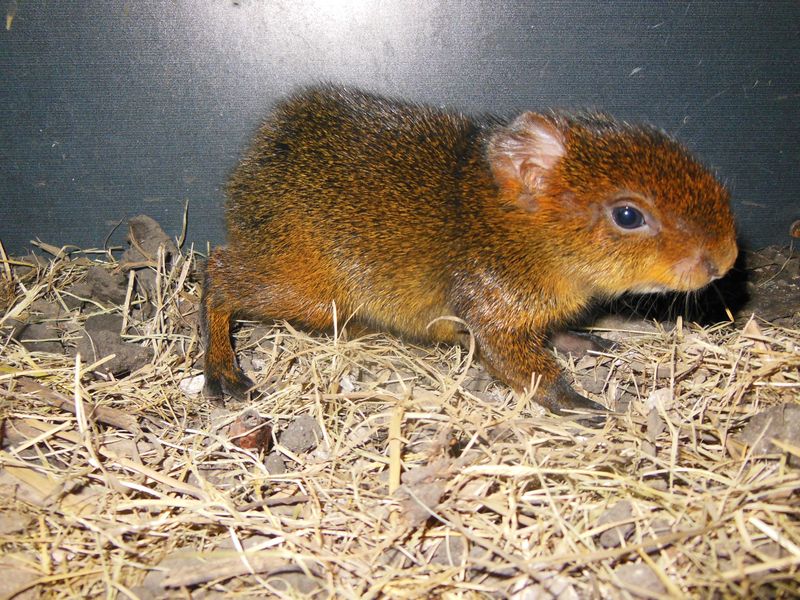 Agoutis are related to guinea pigs and look quite similar, but they are larger and have longer legs. In the wild, they are shy animals and flee from humans, while in captivity they may become trusting.

Agoutis are found in forested and wooded areas, and they conceal themselves at night in hollow tree trunks or in burrows among roots. Active and graceful in their movements, their pace is either a kind of trot or a series of springs following one another so rapidly as to look like a gallop. They take readily to water, in which they swim well.

When feeding, Agoutis sit on their hind legs and hold food between their fore paws. They may gather in groups of up to 100 to feed. They eat fallen fruit, leaves and roots and may sometimes climb trees to eat green fruit. They will hoard food in small, buried stores. They are regarded as one of the few species that can open Brazil nuts without tools, mainly thanks to their strength and exceptionally sharp teeth.

Agoutis give birth to litters of two to four young after a gestation period of three months. Young are born into burrows lined with leaves, roots and hair. They are well developed at birth and may be up and eating within an hour. Fathers are barred from the nest while the young are very small, but the parents remain a pair for the rest of their lives. They can live for as long as 20 years, a remarkably long time for a rodent.

According to the IUCN Red List of Threatened Species, Azara’s Agouti is classified as “Data Deficient”. There is continuing uncertainty on the species distribution, threats and conservation measures. However, this species is suspected to be threatened, but there is still very little information on its extent of occurrence, status and ecological requirement. 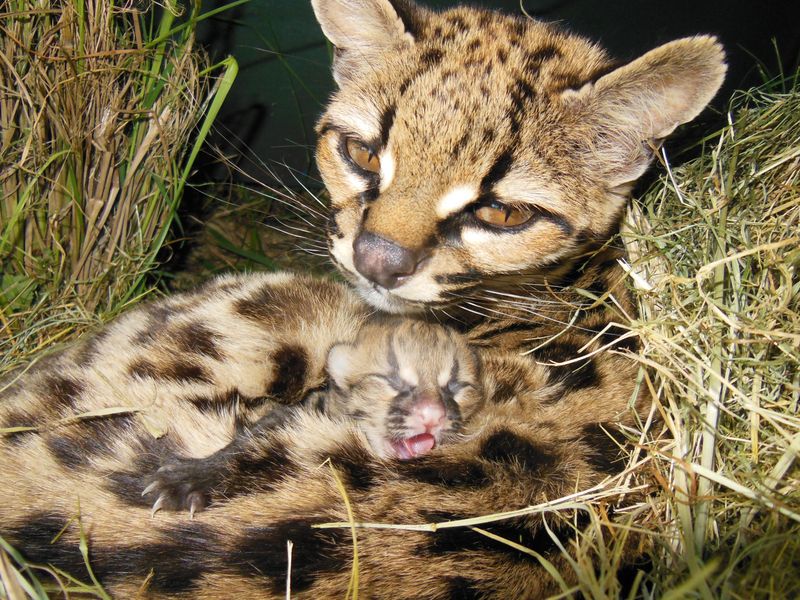 A Margay, at Bioparque M’Bopicuá, in Uruguay, gave birth to a beautiful, healthy kitten on November 1st. 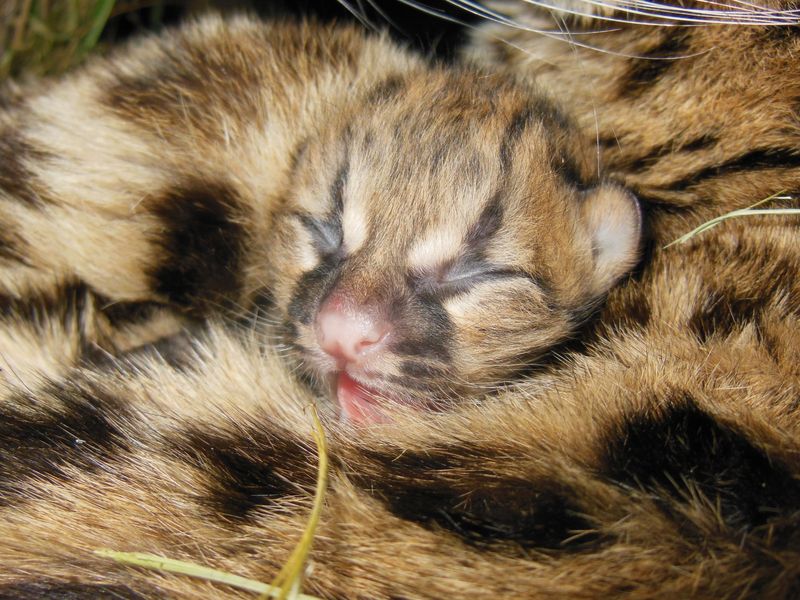 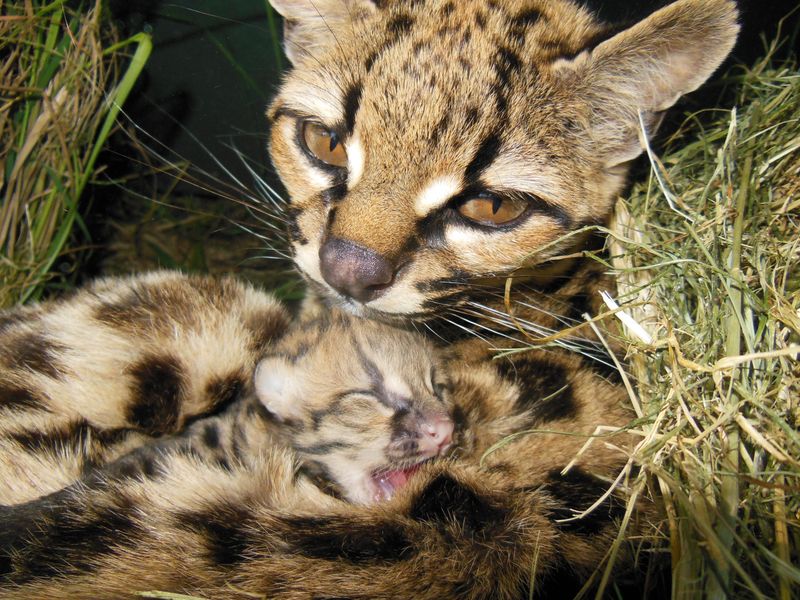 The Margay is a small cat that’s native range extends from southern Mexico, through Central America and in northern South America east of the Andes. It is very similar to the larger Ocelot in appearance, although the head is a little shorter, the eyes larger, and the tail and legs longer. The Margay is a more skillful climber than the Ocelot.

The Margay is mostly nocturnal. Their diet consists of small mammals, birds, eggs, lizards and tree frogs. Since their habitat is in forested areas, it has been reported that the cat has the ability to achieve all of its hunting for prey entirely in trees. There have also been reports of Margays using auditory mimicry in an attempt to lure their prey.

Gestation, for the Margay, lasts about 80 days, and generally results in the birth of a single kitten. Kittens weigh 3.0 to 6.0 oz. (85 to 170 grams) at birth. This is relatively large for a small cat, and is probably related to the long gestation period. The young open their eyes at around two weeks of age, and begin to take solid food at seven to eight weeks.

The Margay is listed as “Near Threatened” on the IUCN Red List. Remaining populations are declining due to habitat loss from forest conversions, and, until the 1990s, Margays were hunted illegally for the wildlife trade.

Bioparque M’Bopicuá, operated by Montes del Plata, in Uruguay, is comprised of a fauna breeding centre, an autochthonous flora trail and a historical area of high cultural value: the ruins of a meat preservation plant dating to the 19th century known as the “Saladero de M’Bopicuá.”

The main objective of the 150-hectare Bioparque M’Bopicuá bio-park is to breed wild fauna, especially endangered autochthonous species, and later introduce them to their natural habitats. Since it was established, the bio-park has reproduced and in some cases reintroduced various mammal, avian and reptile species. The current inventory consists of 560 specimens from 54 different species.

Some of the species that have been successfully bred include the Pampas Deer, Pampas Cat, Yellow Cardinal and the Broad-Snouted Caiman. In terms of reintroduction, various species have been freed into their natural habitat, in particular coatis and caimans.

Educational organizations, specialized groups and company employees can visit the Bioparque M'Bopicuá circuit to increase awareness and contact when there are no breeding activities taking place.

In March 2011, the bio-park was admitted as a member of the WAZA (World Association of Zoos and Aquariums) and declared to be of Departmental Interest by the Río Negro government. 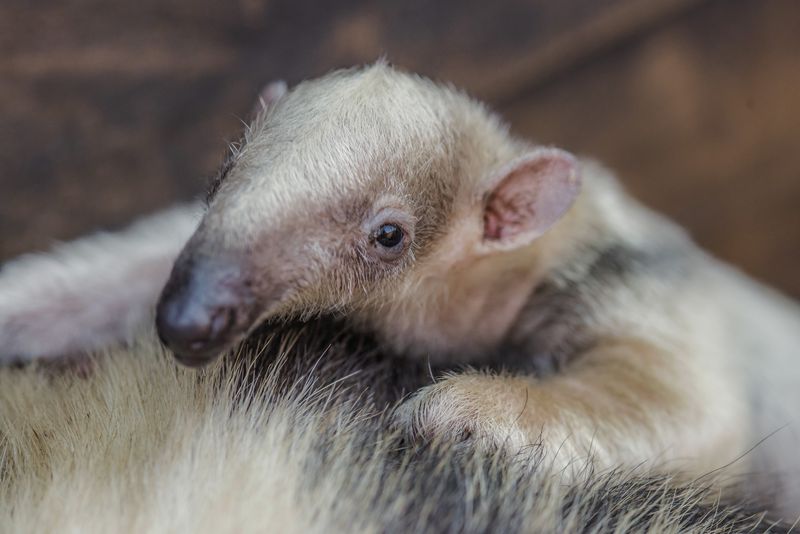 A baby Tamandua born at Bioparque M'Bopicuá on September 10 is not only the first to be born at the zoo – it is the first captive-born Tamandua in all of Uruguay. 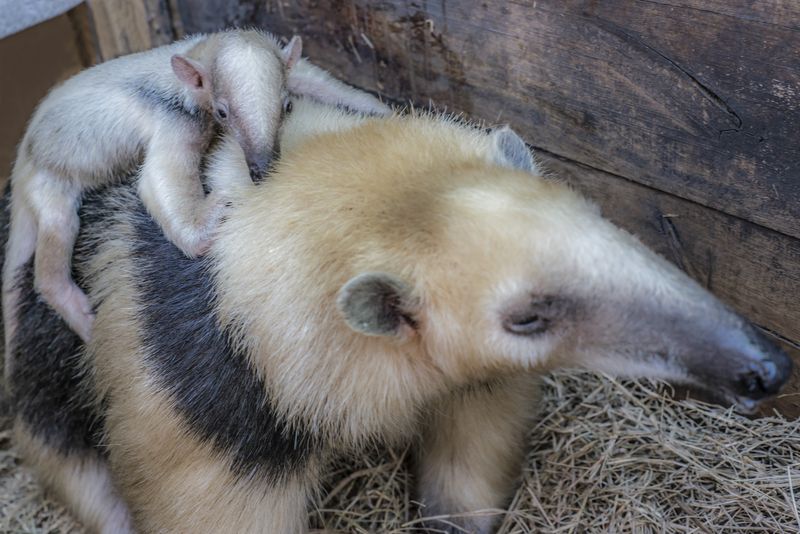 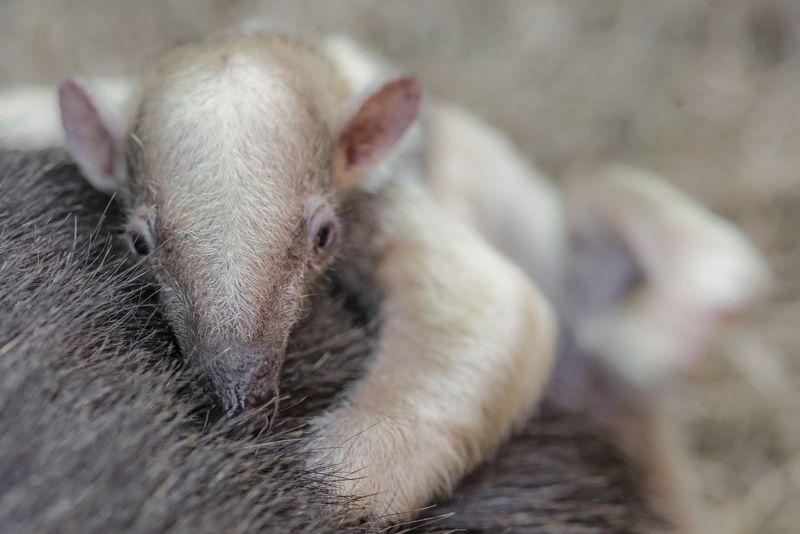 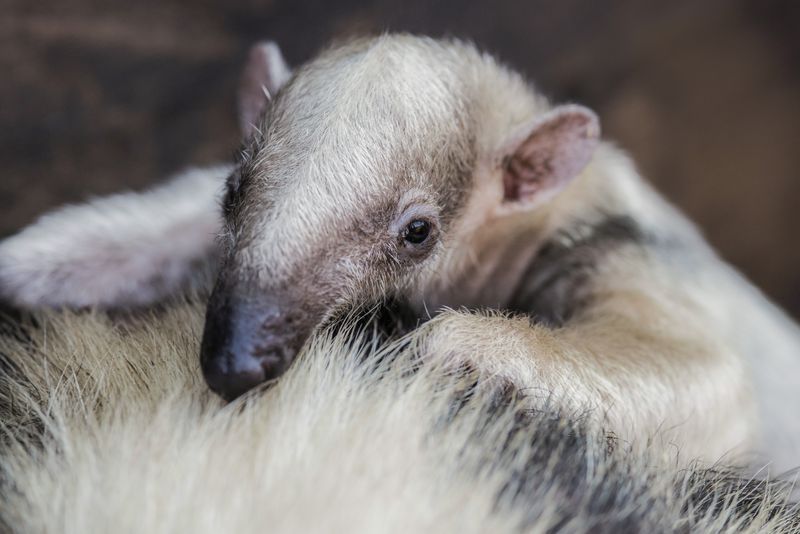 Also known as Lesser Anteaters, Tamanduas are native to Central and South America.  Tamanduas are supremely adapted for slurping up ants and termites:  Their long, tubular snout holds a sticky, 16-inch-long tongue, which grabs bugs by the dozen when a nest is discovered.

Surprisingly, Tamanduas spend most of their time in the treetops, searching for ant and termite nests.  During the day, they’ll sleep in tree hollows used by other creatures at night.

Tamnaduas are not threatened, but they still face pressures from hunting and the pet trade.

See more photos of the baby Tamandua below. 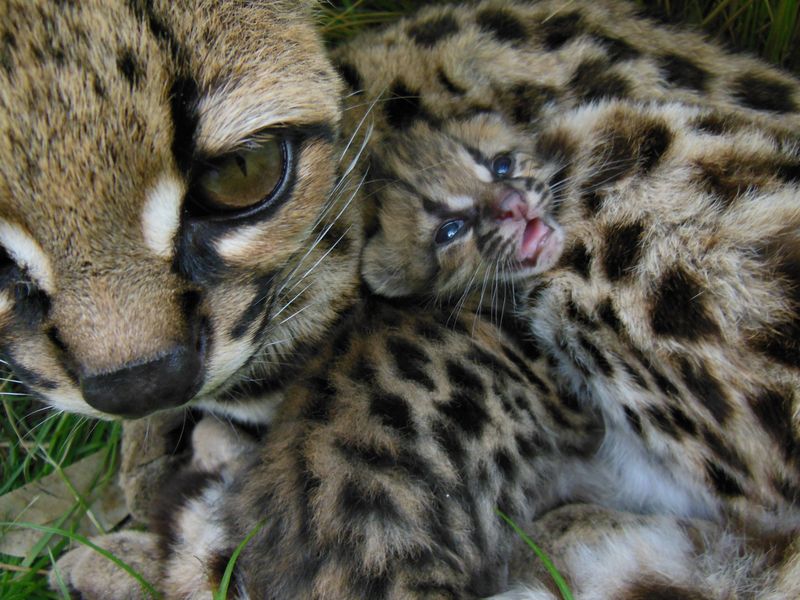 Congratulations to Bioparque M'Bopicuá! On November 10 they welcomed the first-ever Margay kitten to be born at the breeding station. (Incidentally, this is the first Margay we've ever featured on ZooBorns!) Bioparque M'Bopicuá aids wildlife conservation in Uruguay with its protected wildlife reserve and captive breeding programs to supplement wild populations of native animals. 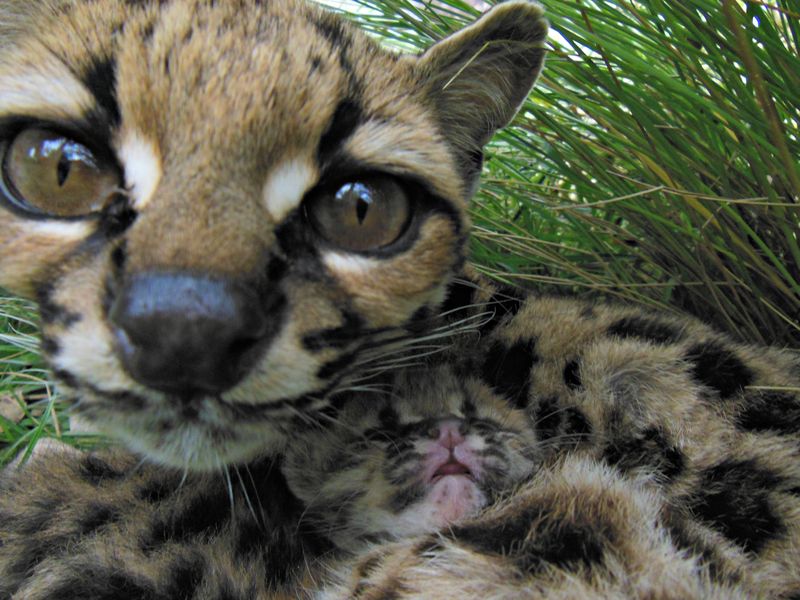 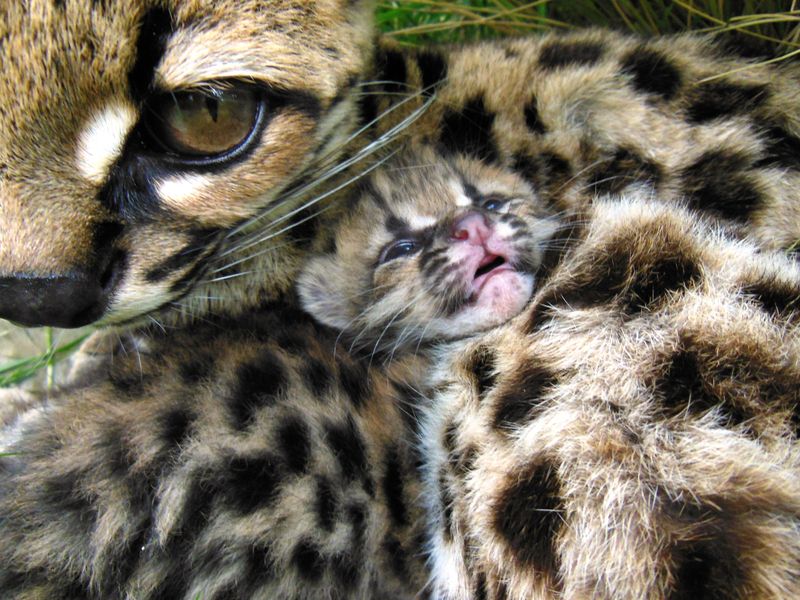 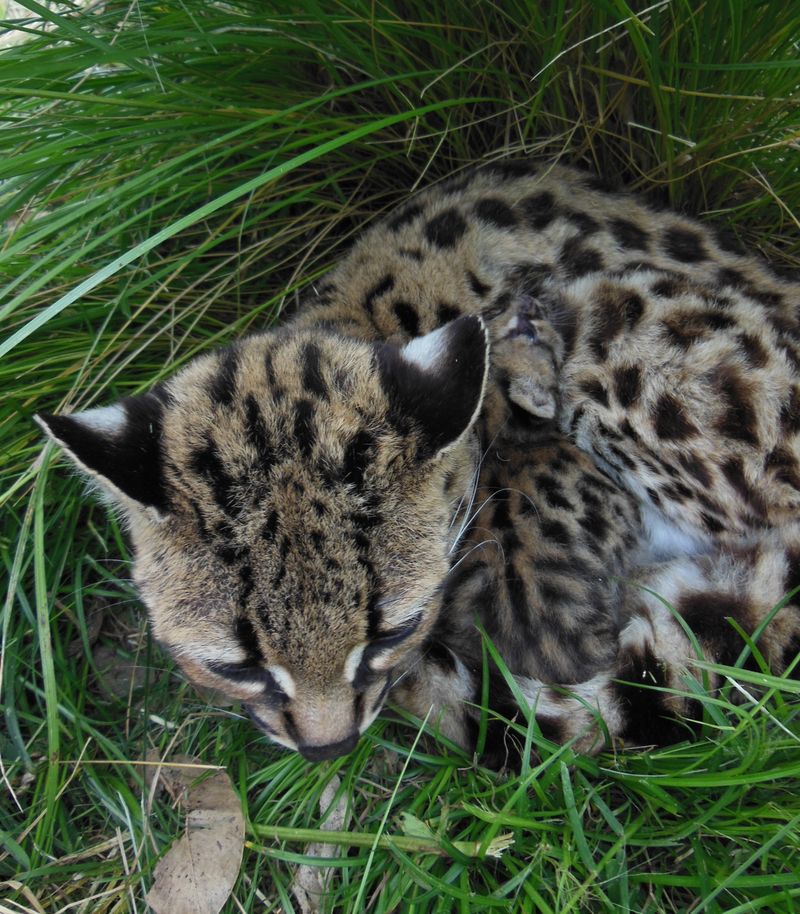 See a video of mother and kitten:

Margays are spotted cats native to Central and South America, from southern Mexico to northern South America east of the Andes. Larger than house cats, they are active at night and spent most of their time in trees. Margays usually give birth to just one kitten, but very rarely have litters of two. After a gestation period of about 80 days, which is a pretty long time for a small cat, Margays give birth to a kitten that is fairly large but still helpless. Kittens open their eyes at about two weeks old, and begin to eat solid food at seven to eight weeks old.

Margays are a Near Threatened species on the International Union for Conservation of Nature's (IUCN) Red List of Threatened Species. According to the IUCN, the species is at risk due to habitat loss and fragmentation, in addition to hunting for the cat's beautiful spotted fur. 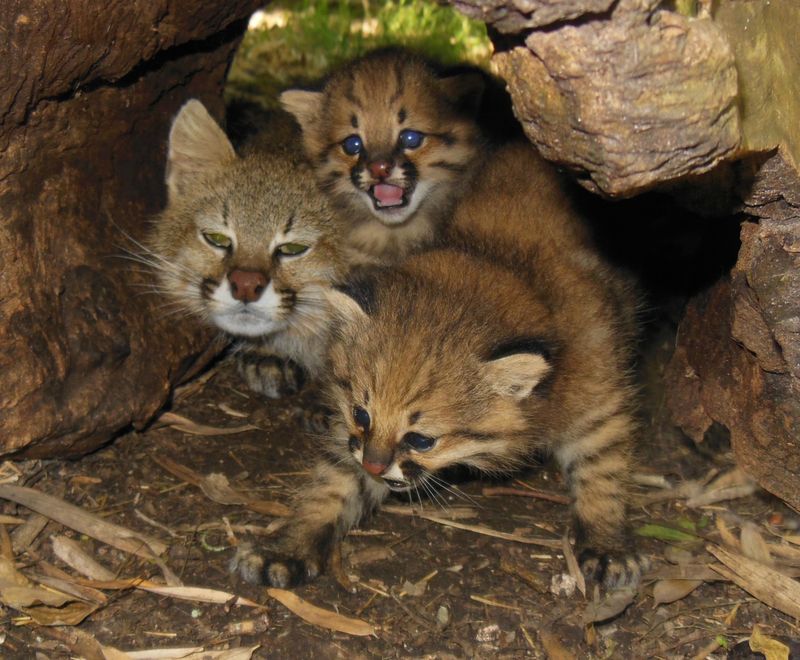 Two Pampas Cats born on October 30 at Uruguay’s Bioparque M’Bopicuá are the second generation of these little-known felines to be born at the facility. 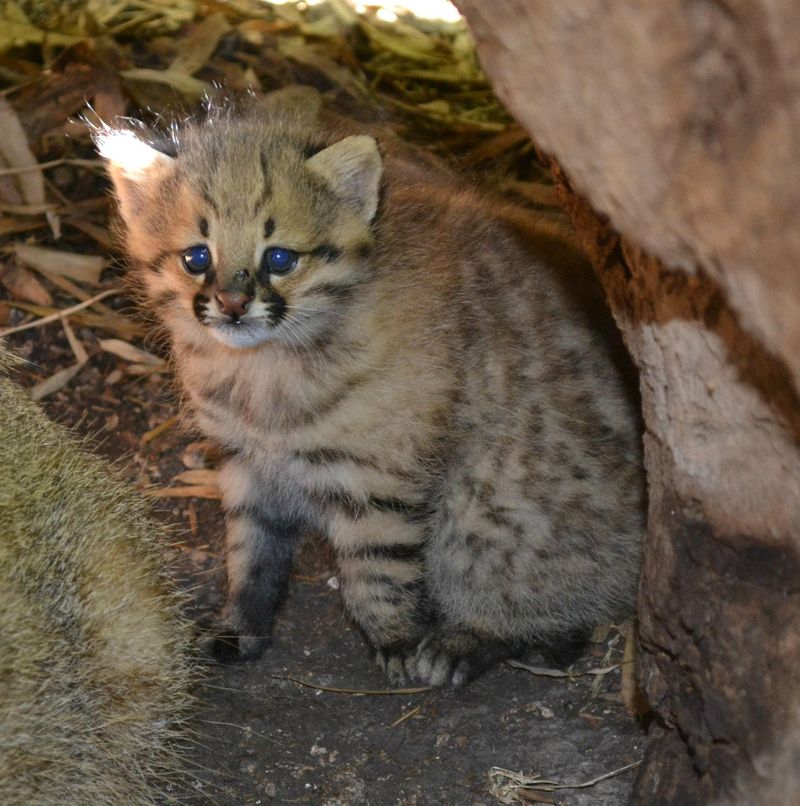 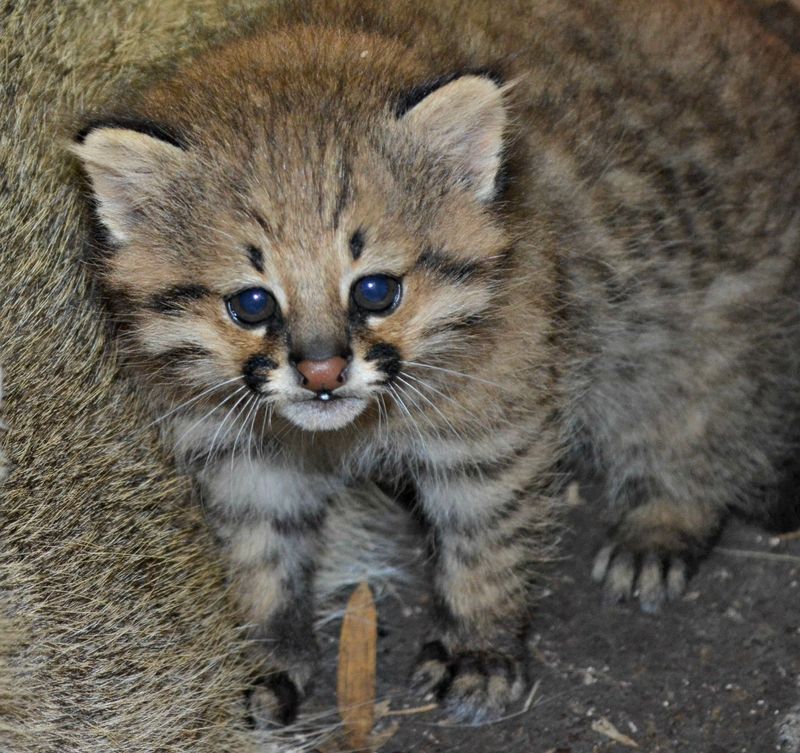 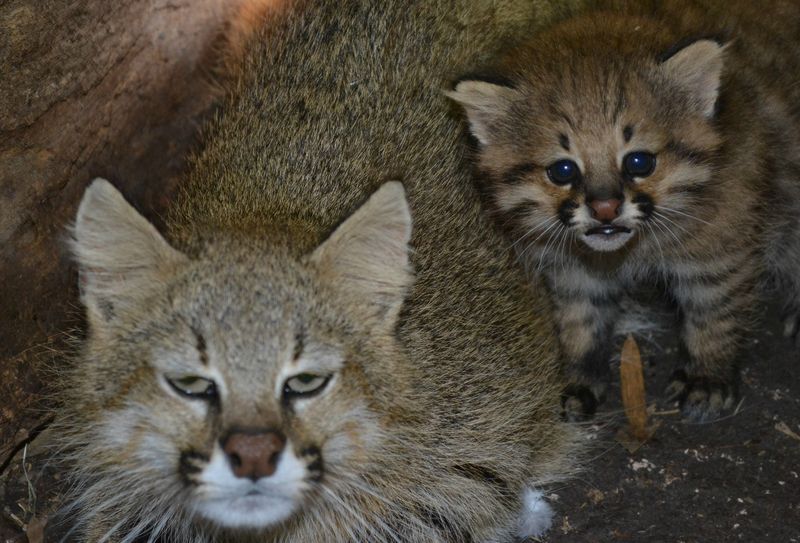 With sturdy, compact bodies, Pampas cats resemble domestic cats in many ways.  Because of their wide range along the western edge of South America, these cats are well adapted to a variety of habitats, from the pampas (grasslands) to forests, swamps, and cold deserts.

Not much is known about wild Pampas Cats, but they were extensively hunted for their pelts until international trade was banned in 1987.  They are listed as Near Threatened by the International Union for Conservation of Nature.  Habitat destruction poses the most significant threat to these cats today.

See more photos of the kittens below the fold.