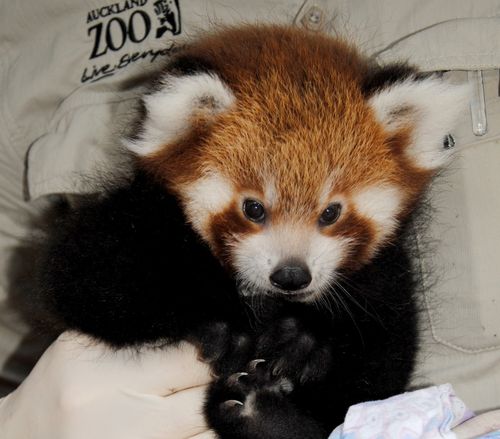 You may have first read about this baby Red Panda from Auckland Zoo HERE on ZooBorns. As a result of a vet check, it was determined that they had a little boy! Born on Christmas Eve, he is the first offspring of three-year-old mom Bo and 12-year-old dad Sagar. He has been healthy and growing at a normal rate.

The Zoo just wrapped up a naming contest for the cub through Facebook, and the results are in: By an overwhelming majority, the public voted for the name Pabu, which means puff-ball of fluffy.  The other choices had been Nepalese words, since the Red Panda is found in the wild in Nepal. They were: Sundar (meaning beautiful/good.joy), Bhushan (adornment), HImal (snow mountain), and Mohan (charming). 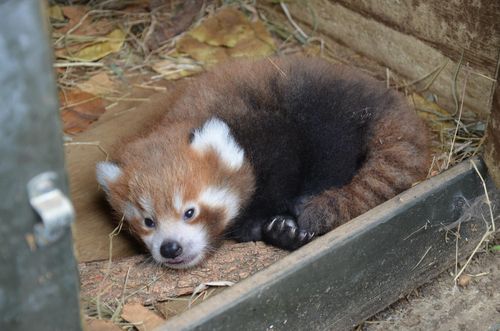 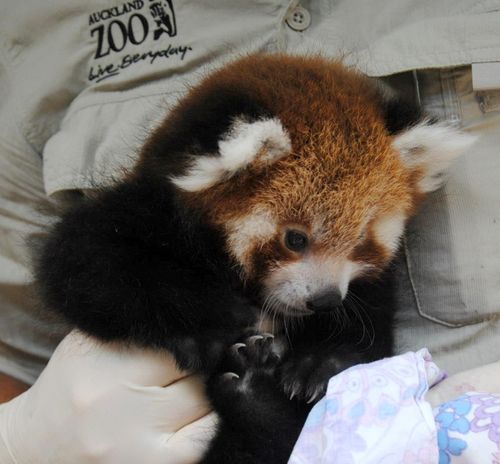 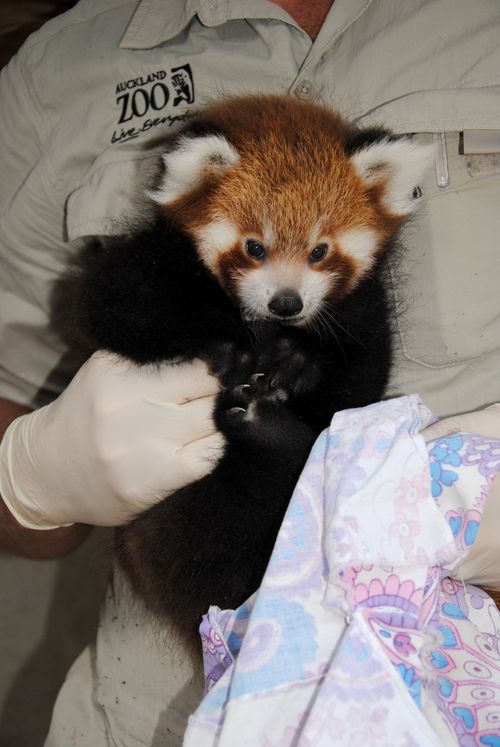 The IUCN Red List classifies this animal as Vulnerable. It is threatened by illegal hunting and deforestation. Remaining populations are fast becoming fragmented and isolated from each other. It is uncertain how many remain in the wild today, but estimates suggest it may be as low 2500 individuals. There are close to 500 individuals in zoos worldwide. 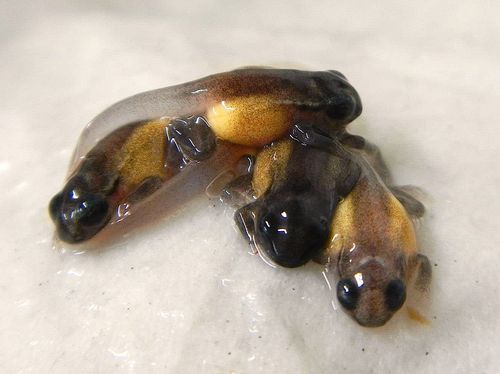 For the first time ever, Archey's Frogs have been successfully bred in captivity. Aukland Zoo is the only facility in the world to keep this critically endangered New Zealand species.

Laid in October, the eggs hatched in early December. Twice before, other facilities had attempted to breed Archey's Frogs from wild-caught individuals, but the young did not survive to adulthood. Aukland Zoo now has seven healthy young frogs, bred from their own long-term captive population. 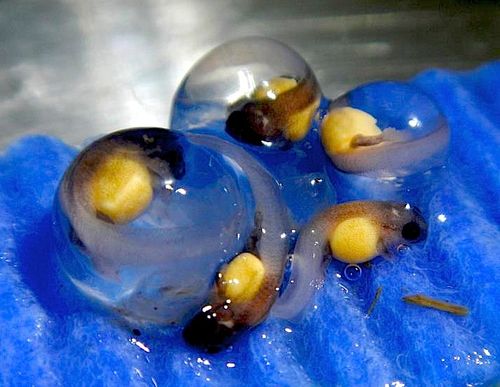 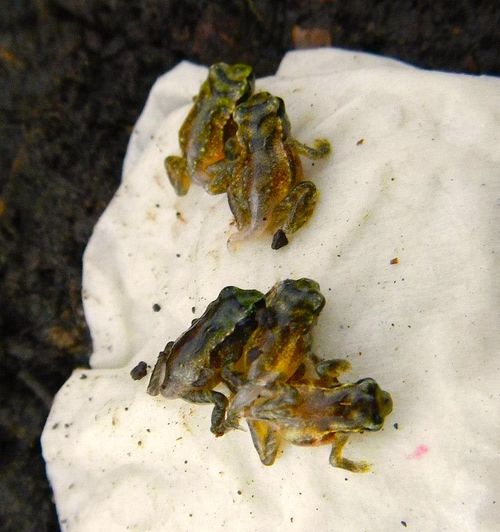 What makes Archey's Frogs unique? Read more after the fold. 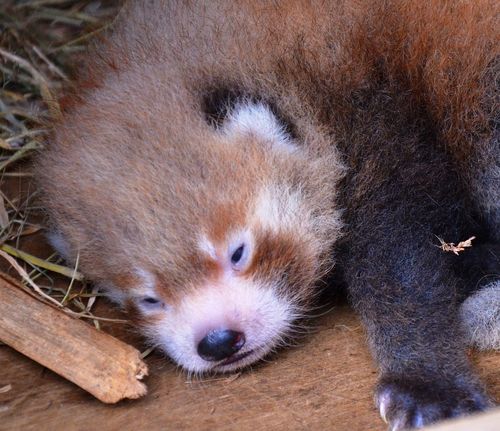 Keepers at the Auckland Zoo say the birth of a rare Nepalese Red Panda baby in the early hours of December 24 was the best Christmas present they could have received. It is the first to be born at the zoo since 2002, weighing in at just 105 grams (equal to a medium sized tomato). Now, at four weeks old, the little one is estimated to have grown to 240 grams, a little over half a pound.

The cub, the first offspring of three-year-old mom Bo and 12-year-old dad Sagar, is an extremely valuable addition to the international breeding program for this species. The IUCN Red List classifies this animal as Vulnerable. It is threatened by illegal hunting and deforestation. Remaining populations are fast becoming fragmented and isolated from each other. It is uncertain how many remain in the wild today, but estimates suggest it may be as low 2500 individuals. There are close to 500 individuals in zoos worldwide.

“This birth is a fantastic result, especially as Bo was only introduced to Sagar last August, given that female Red Pandas come into season just twice a year and a male has only a one to two-day window to mate a female,” said Carnivore Team Leader Bruce Murdock. “We couldn’t ask for a better mum in Bo. She’s doing an exceptional job, staying in the nest box for long periods and feeding her cub up to six times a day, and being very attentive.” 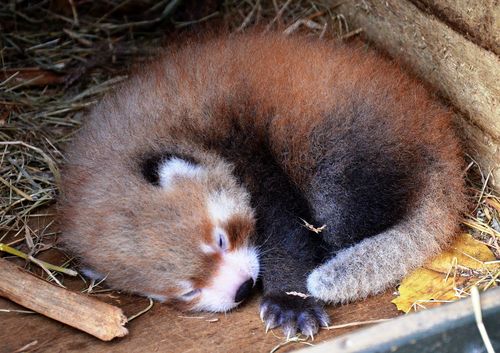 Dad has been to the nest box to check out his offspring, but leaves the parenting to Bo. Murdock added, “We’re keeping a regular watch on this cub, but taking a very hands-off approach so Bo can continue to do the great job she’s been doing.”

Murdock says Red Pandas develop slowly and are dependent for at least three months, so it could be another eight to 10 weeks before visitors see the cub venturing out and around the enclosure with Bo. A full vet check will be done in late February, and at that time its gender will be confirmed.

All that nursing and growing causes cub-naps, as seen in the video below:

Read more about Red Panda conservation after the fold:

Jana and Juno, the Auckland Zoo's resident otter couple, spent a year in courtship before they decided they liked one another. Asian small-clawed otters mate for life but are "notoriously fussy" about who that mate will be. Well a few weeks ago Jana gave birth to two fluffy male pups, weighing just 400-500 grams or just about a pound. 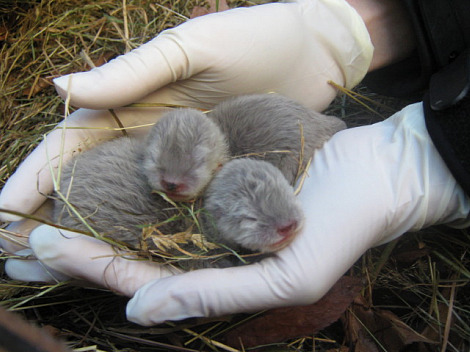 Baby otter does not look pleased 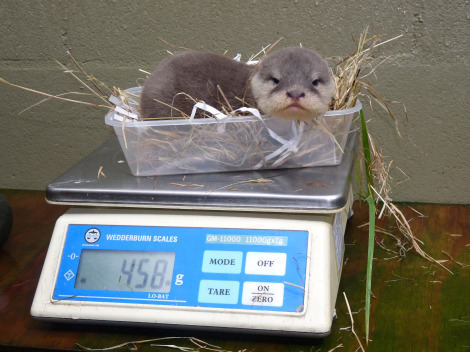 I will trade you anything for your handful of otter 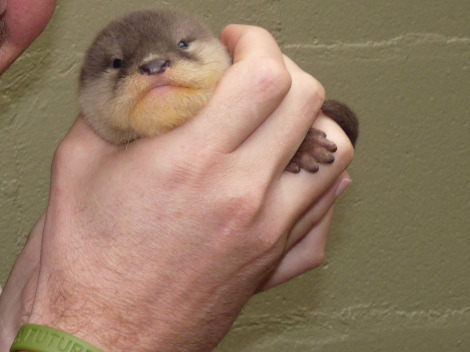 "Otters don't develop their waterproof coats until three months, so for now with their big strong heads on top of their little uncoordinated bodies and their soft furry coats, they're incredibly cute - rather like cuddly little baby bull dogs." explained Auckland Zoo otter team leader, Amy Dixon. These little pups are the first Asian small-clawed otters born at an Australasian zoo in six years.

Thanks to Abbey Allpress for the tip!