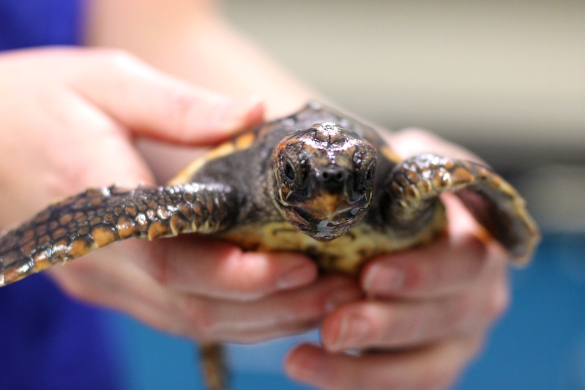 The young turtle hatched in August and will call Adventure Aquarium home for most of the year. This coming fall, it will be released into the Gulf Stream, off the coast of North Carolina, along with other yearlings from aquariums all over the country.

Staff says they won’t know the gender of the little one, as that can’t be identified until a Loggerhead Sea Turtle reaches sexual maturity at the approximate age of 21.

Each year, Adventure Aquarium welcomes a hatchling from North Carolina Aquarium, at Pine Knoll Shores Sea Turtle Program, to rehabilitate for one year. Biologists will help guide and train the hatchling to do activities it would normally do in the wild as a sort of “survival school” for Sea Turtles.

“The hatchling came to us weighing 86 grams [a little over 3 oz.] and is now over 226 grams, or just under eight ounces,” said Nikki Grandinetti, Curator of Fish and Invertebrates at Adventure Aquarium. “He loves jellies and shrimp. He’s also very active and investigates anything with his mouth.” 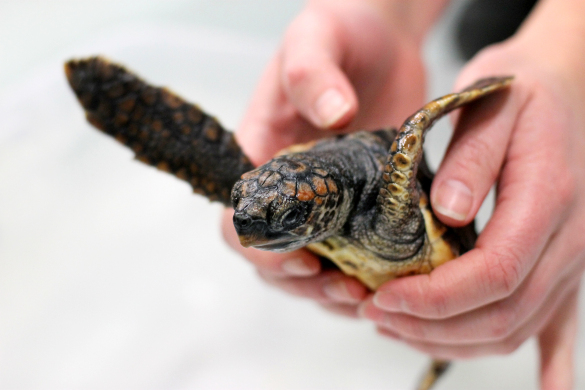 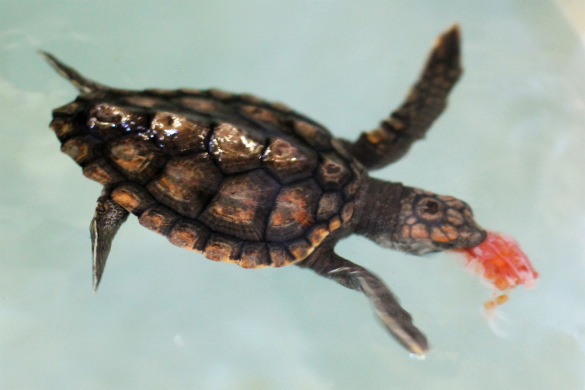 During the month of January, Adventure Aquarium is also asking guests to help select the name of the young turtle at a voting station located in the Main Lobby of the Aquarium. The name options are: Darwin, Griswold, Groot and Tina. Using spare change, guests visiting Adventure Aquarium will be able to vote for their favorite name choice. The winning name will be announced this coming February.

Check Adventure Aquarium’s website and social accounts for the latest news about their Loggerhead hatchling, as well as the other Aquarium animals, events and more: http://www.adventureaquarium.com 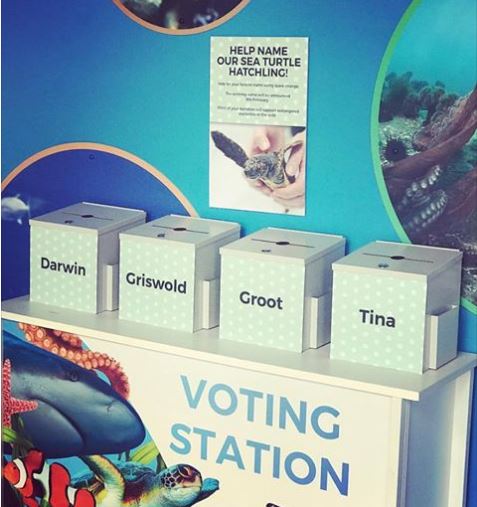 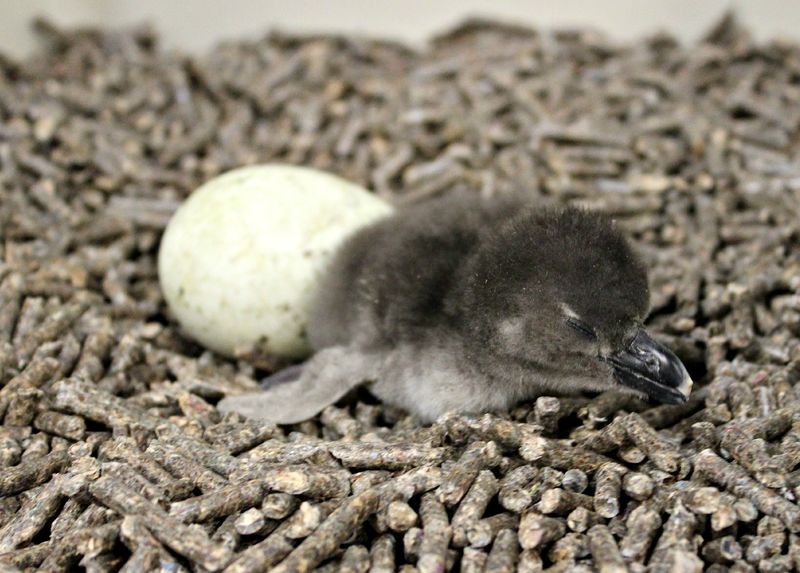 An African Penguin chick has hatched at Adventure Aquarium in New Jersey. (Forgive the title--we couldn't help it!) A healthy, active, 2.5-ounce (72 g) ball of fluff, whose gender is yet to be determined, was born to parents Minnie and Kamikaze on January 5.

The day before, aquarium biologists had heard soft 'pipping' sounds from inside the egg as the chick readied itself to hatch by chipping away at its shell. They knew that a hatching was imminent. Sure enough, biologists arrived Sunday morning to see that the little chick had hatched overnight.

The chick is doing very well – strong, vocal and very mobile. It is pictured at one day old, so tiny that it would fit in the palm of your hand! 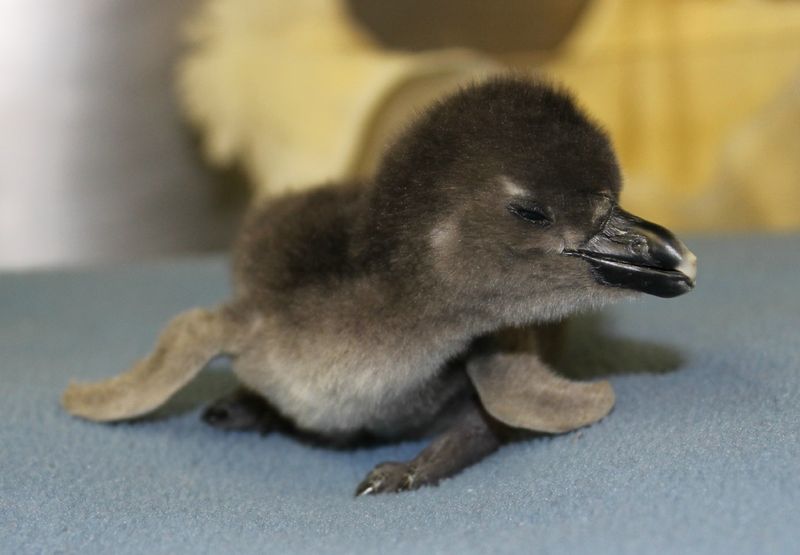 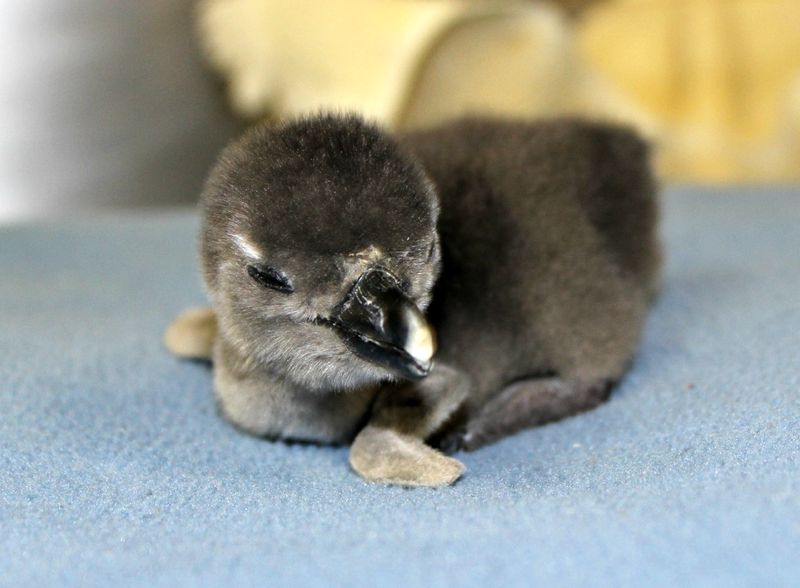 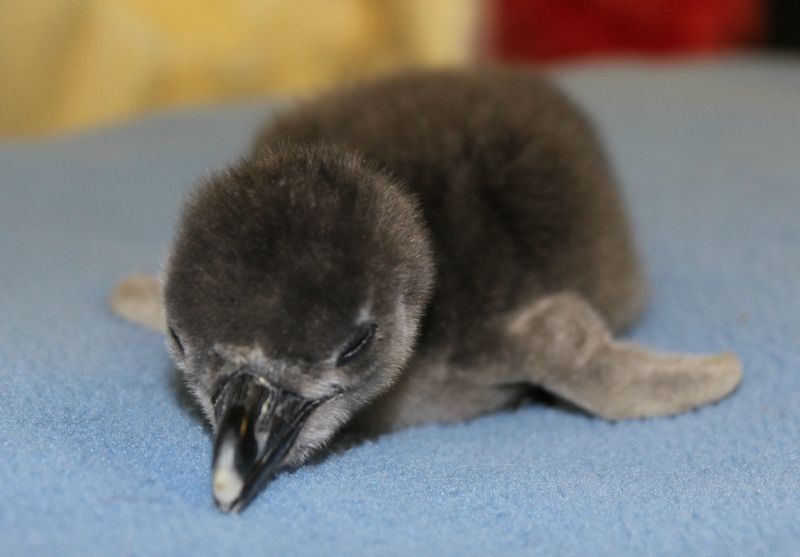 This chick is Minnie and Kamikaze’s seventh since they became a breeding pair, and will be the fourth of theirs to call Adventure Aquarium home, along with siblings Myer, Jack and Jambo. Three of the pair’s other chicks were sent to other facilities across the country as part of the Association of Zoos and Aquaria’s (AZA) Species Survival Program (SSP) breeding recommendations. An SSP coordinates breeding of genetically unrelated animals between AZA accredited facilities. This helps to prevent inbreeding and sustain a healthy population in captivity.

This effort takes on an even greater importance when the species is endangered in the wild, as are African Penguins. The greatest threat to these birds is competition with humans: as we continue to overfish, African Penguins lose their food source. Having a healthy captive population allows us to study the biology of a species for better conservation. In some case, it can also give us the ability to give wild populations a boost by releasing captive-bred individuals.

Today the chick will have its first veterinary checkup, and it will go through daily weigh-ins with aquarium biologists, who will ensure that the chick continues to thrive.

This weekend, January 11-12, Adventure Aquarium is hosting a Celebrity Penguin Weekend. Pumpkin and Patch, 'grandchicks' of Minnie and Kamikaze, will make their debut.

African Black-Footed Penguin Growing Up Quickly at the Adventure Aquarium 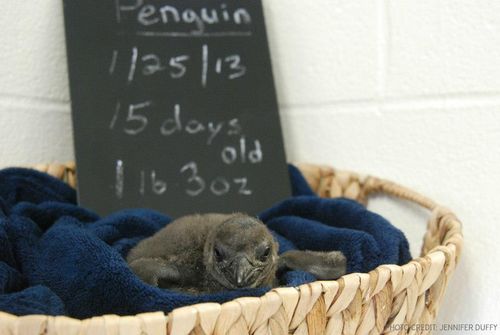 Adventure Aquarium's penguin colony grew by one last month when they welcomed an African Black-Footed Penguin chick on January 11th. The little critter, whose gender is still unknown, was about the size of a golf ball and weighted just sixty grams when it first hatched. That did not last long however, as the little one is growing faster than keepers can keep track. By January 25th, just two weeks after pecking its way out of its egg, the chick had already exploded to a weight of over one and a quarter pounds and now stands over six inches tall. The baby is the first for parents Kali and Tyson who were paired for breeding by the Association of Zoo and Aquarium's (AZA) African Penguin Species Survival Plan (SSP). They have a tall order caring for their rapidly growing first-born who is dependent on them for warmth until it can regulate its own temperature at around one month old. Until then, Kali and Tyson will take turns incubating the baby and brining back food for their growing child.

The African Black-Footed Penguin, the only penguin species found in Africa, was once quite abundant with an estimated four million in existence at the beginning of the 20th century. That number dropped dramatically to 200,000 by the year 2000 and has continued to fall to an estimated 55,000 living today. This rapid decline has led to a classification of endangered on the IUCN's Red List. It is estimated that if this trend continues the species will be extinct in the next fifteen years. With such a imperiled future, every birth can be considered a victory. 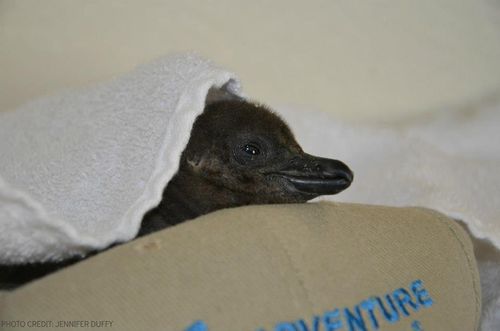