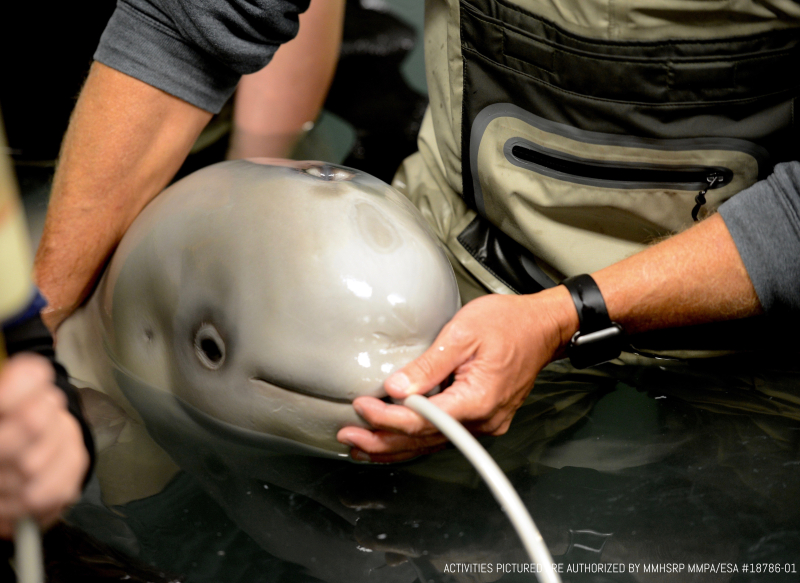 A stranded Beluga Whale calf, struggling to survive on its own, was rescued from Cook Inlet, Alaska on Saturday, September 30. The male calf is undergoing intensive around-the-clock care at the Alaska SeaLife Center with the help of Marine Mammal experts from around North America.  The calf is a member of the critically endangered Cook Inlet Beluga Whale population, which has declined to approximately 328 individuals left in the wild.

The solitary calf, estimated to be four weeks old, was spotted alone and distressed by a National Oceanic and Atmospheric Administration Office of Law Enforcement (NOAA OLE) Enforcement Officer and Department of Public Safety / Alaska Wildlife Troopers Pilot returning from a helicopter patrol. No adult Belugas were seen in the area. Under authorization from NOAA Fisheries’ Marine Mammal Health and Stranding Response Program (MMHSRP), the NOAA enforcement officer and the Alaska Wildlife Troopers pilot attempted unsuccessfully to encourage the animal back in the water. NOAA helped coordinate the transport of an Alaska SeaLife Center veterinarian to the site to assess the animal's condition. A decision was made to transport the Beluga calf to Anchorage for subsequent transfer to the Alaska SeaLife Center in Seward. 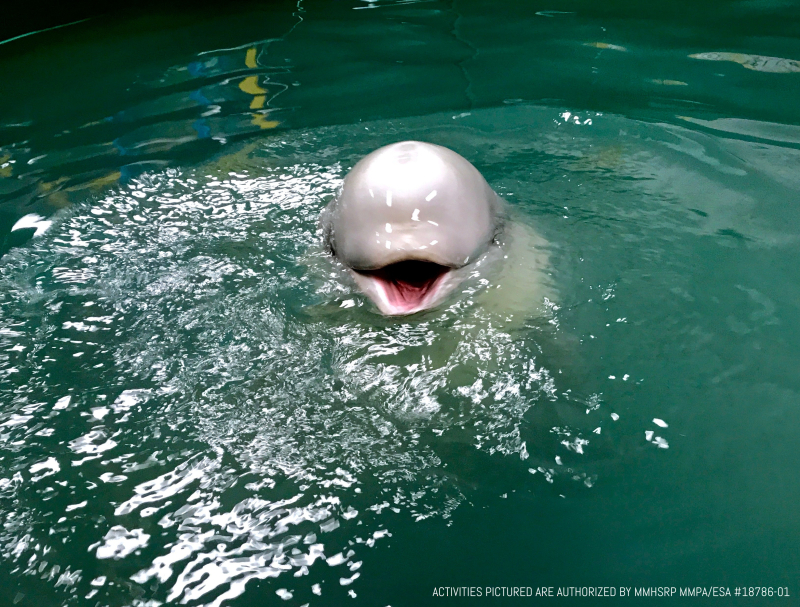 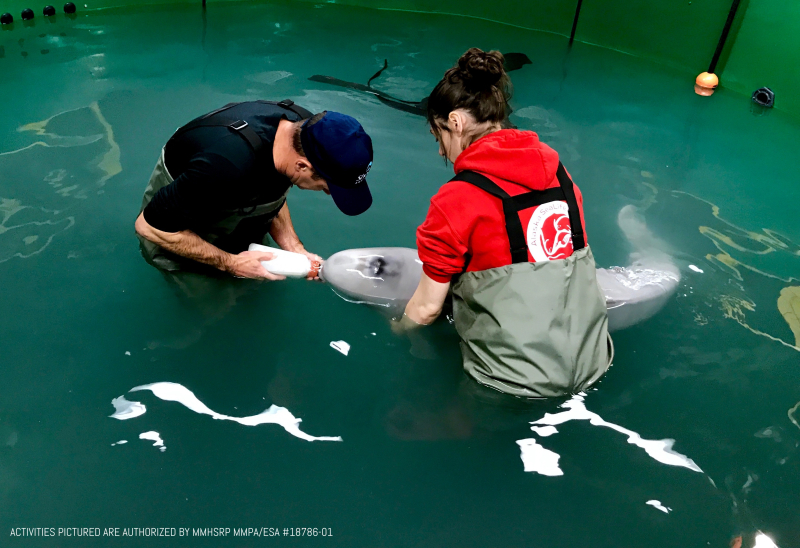 The calf is currently receiving treatment in the Alaska SeaLife Center’s I.Sea.U. “The calf appeared to have been stranded for several hours and was in a weakened condition; without evidence of major physical trauma. He is able to swim on his own and is breathing regularly, which are very positive signs. However, there are tremendous hurdles ahead. Because this animal is extremely young, there is a high risk of complications,” said Dr. Carrie Goertz, DVM, ASLC Director of Animal Health. With any cetacean [Whale or Dolphin] rescue, particularly with a neonatal calf, survival is estimated at less than 10 percent.

When a stranded animal arrives at the Alaska SeaLife Center, the first goal is to rehydrate the animal. Aminoplex is a formula that helps animals when they are in a severe state of dehydration.  This is the first fluid the calf received upon arrival at the Center’s I.Sea.U. The  calf was 64 inches long and weighed 142 pounds when it arrived at the Center.

The Beluga calf has graduated from drinking Aminoplex to a milk matrix with fish and antibiotics added. The calf actively suckles his formula, but the team is still determining the best way to deliver his meals. A bottle does not allow the calf to gain proper suction. They have found that the calf is able to suckle better from the tip of a wide tube inserted just inside his mouth. (This is not traditional “tube feeding,” in which food is delivered directly to the stomach via tube and the animal receives the food passively, without suckling.)

To best care for this endangered calf, Alaska SeaLife Center pulled together a team of first responders, which included on-site Marine Mammal experts with support from five North American aquariums with professional experience caring for Beluga Whales. Together, veterinarians and Marine Mammal experts at Alaska SeaLife Center, Georgia Aquarium, Vancouver Aquarium, Shedd Aquarium, SeaWorld, and Mystic Aquarium bring decades of hands-on experience caring for, raising, studying and transferring vital knowledge about Beluga Whales, including this critically endangered population. Several of the institutions operate Marine Mammal rescue centers or animal response teams and are deployed when a cetacean requires intervention to give it the best chance at survival – considered even more important when working collaboratively to rehabilitate a member of a critically endangered population.

“As Alaska’s only Marine Mammal rescue and rehabilitation center, our team of experts are responsible for the care of a variety of critical wildlife response situations across the state. To be able to have our expert colleagues assist us with this critically endangered Beluga calf is a true testament to the Marine Mammal community’s commitment to caring for and preserving wild cetacean populations,” said Tara Riemer, President and CEO at the Alaska SeaLife Center. “To witness everyone come together for this very young calf is heartwarming as he is receiving the best 24-hour care from experts across North America.” Shedd Aquarium, a world-class leader in global marine mammal conservation and research, announced that the youngest member of the aquarium’s Beluga Whale (Delphinapterus leucas) family is a girl. For the first time, the public will have the opportunity to see the baby, beginning Friday, Oct. 26, at 11 a.m.

Delivered by mother Mauyak (MAH-yak) on Aug. 27, the five-foot-long calf now weighs more than 205 pounds and is steadily gaining 12 to 15 pounds a week. Improving her milk-intake efficiency, the calf latches onto mom an average of 20 minutes per day. As the calf has mastered nursing, 1,200-pound Mauyak’s appetite has grown as well – nearly tripling her normal diet – eating up to 88 pounds of fish a day. 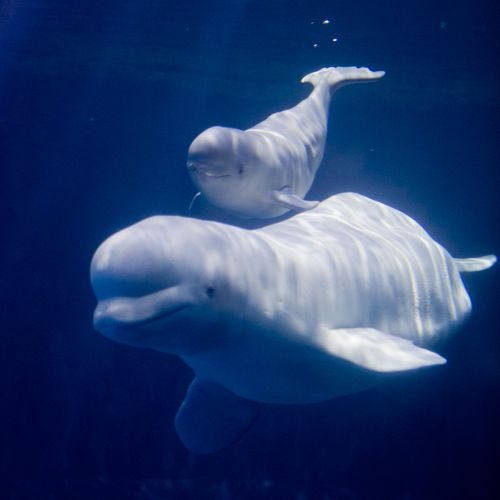 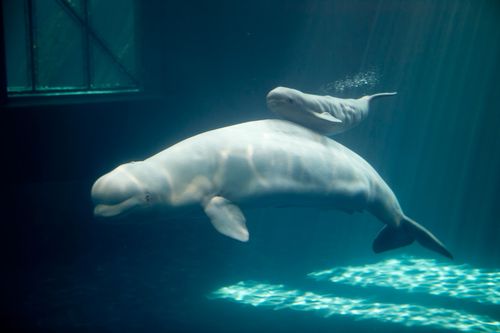 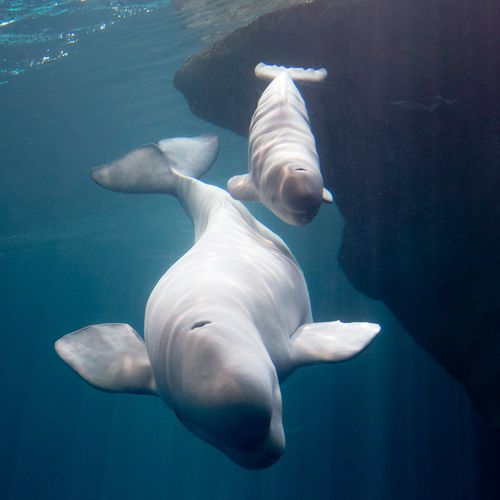 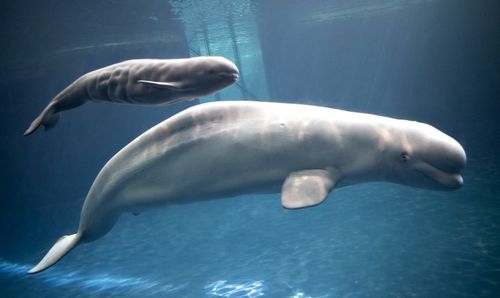 At approximately 2:00 AM yesterday morning, August 27, Chicago's Shedd Aquarium welcomed a healthy Beluga calf to mother Mauyak. Shedd’s animal care team estimates that the calf is 4½ feet long and weighs about 150 pounds. Both mother and calf appear to be doing well and will remain under 24-hour observation by the animal health staff in Shedd’s Abbott Oceanarium.

“We are thrilled to welcome the newest member of the Shedd Aquarium family. A newborn calf must reach several milestones in its first days and months so we remain cautious; however, the calf has demonstrated incredible progress,” said Ken Ramirez, executive vice president of animal care and training at Shedd. “Mauyak is an experienced mom having given birth to two calves in the past, so the labor was quick and went very smoothly.” 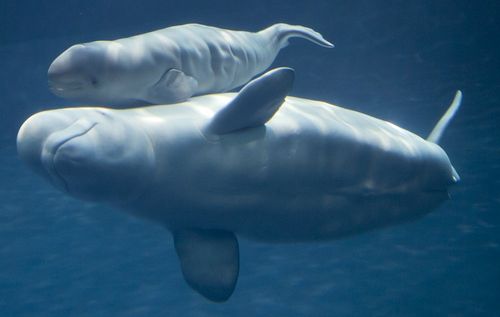 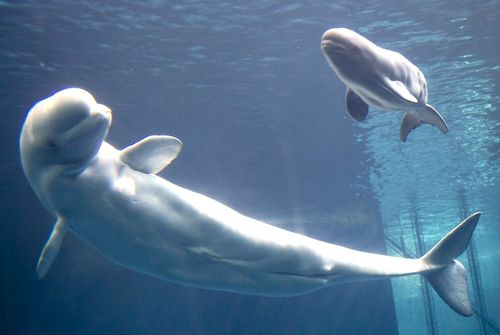 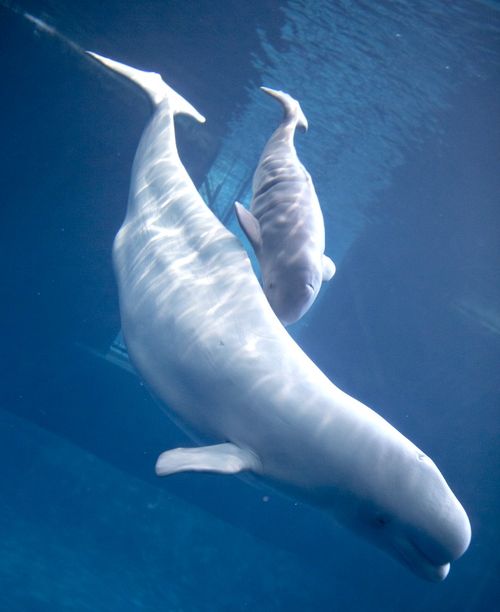 “In less than 24 hours after birth, the calf achieved the first critical milestones that we look for, including taking its first breath, bonding with mom and we’ve seen attempts at nursing,” continued Ramirez, who has nearly four decades of marine mammal expertise, including serving as the past president of the International Marine Animal Trainer’s Association (IMATA). “Shedd’s long history of research and care of these animals tells us that these initial behaviors indicate a strong calf; but we will continue to monitor for signs of development, including steady nursing and growth.”

Animal care is Shedd’s top priority, so mother and calf are currently off exhibit in the Secluded Bay habitat of the Abbott Oceanarium. During the first few critical days following a birth, Shedd’s animal care experts do not physically interact with the whales. Instead, the team observes day and night, allowing time for the mother to nurture her newborn and build a strong bond. As a result, the marine mammal staff has not determined the calf’s gender through a physical examination. 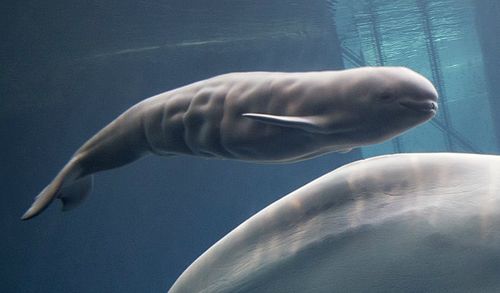 Watch the baby breath, swim and frolic in its first few hours of life!

More photos and information below the fold! 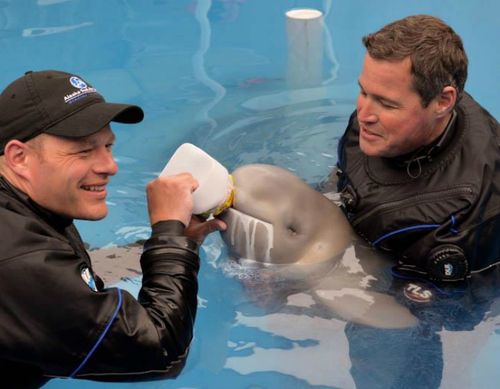 Four accredited U.S. aquariums have come together in an effort to save a newborn Beluga whale calf which was found stranded in South Naknek, Alaska last week - this is the first time in history that a live calf has been found and rescued in U.S. waters. Marine mammal experts with a combined 125 years of experience from Shedd Aquarium, SeaWorld and Georgia Aquarium immediately answered the Alaska SeaLife Center’s call for assistance to provide around-the-clock care for the calf during this rehabilitation period. The male, 112-pound calf is touch-and-go at this point and considered in critical condition – especially due to his immature immune system, and remains under 24-hour observation.

This is a great example of how the aquarium community comes together to work collaboratively in order do what’s best for an animal in need. 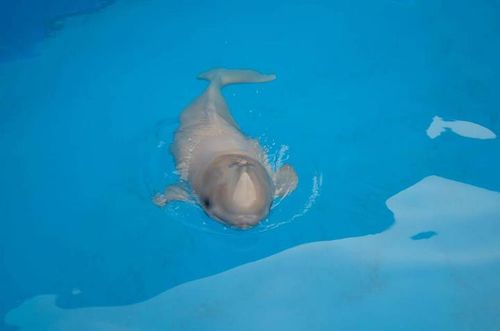 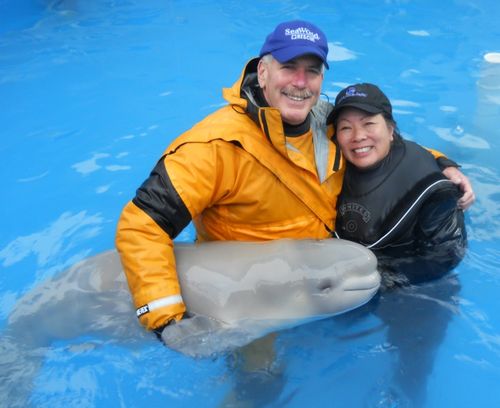 Today Shedd Aquarium's baby Beluga calf, Nunavik, turns one year old! A healthy, happy and playful little tyke of 450 lbs., it's hard to believe that Nunavik almost did not survive his first day. Complications with the birth were overcome by Shedd's outstanding veterinary staff. Today Nunavik loves nothing more than mimicing the antics of mom, Puiji, and enrichment time with Shedd aquarists. 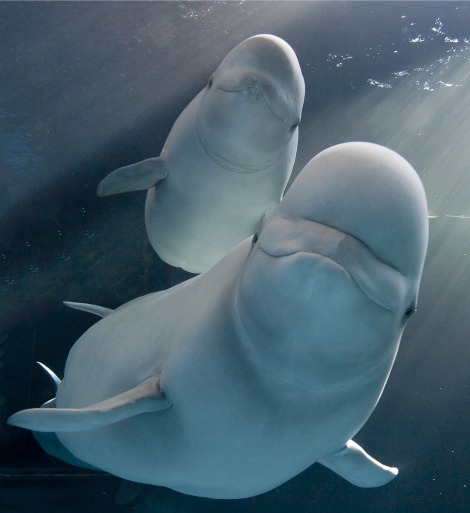 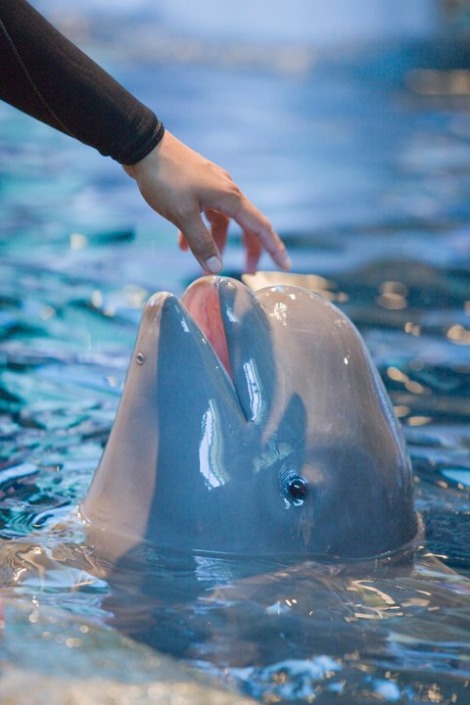 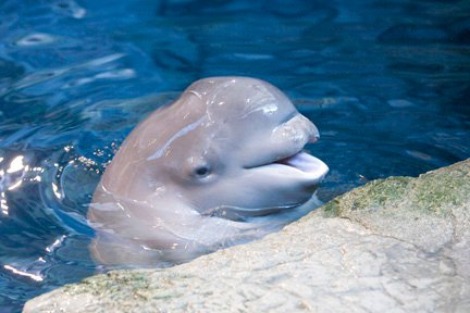 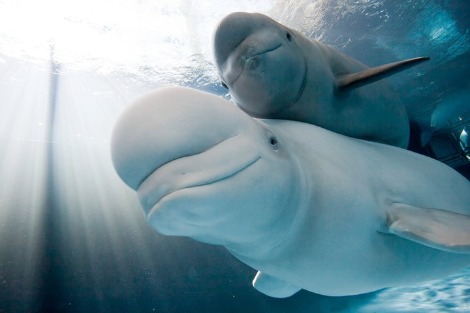 Chicago's Shedd Aquarium welcomed its second healthy baby Beluga calf in under seven days. The 152 lb. calf was born with human assistance by animal health and care experts presumably after it appeared that the birth was not progressing smoothly on its own. According to Shedd, this is only the fourth time a Beluga calf has been successfully birthed after human assistance was required in any aquarium. 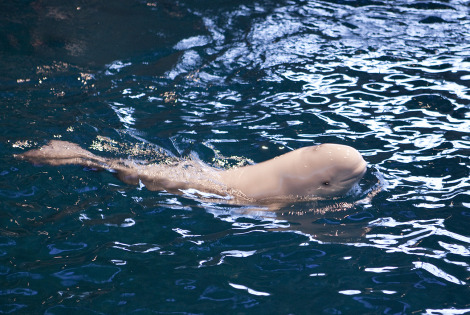 Sad Update: This baby beluga calf passed away shortly after this announcement. The baby exhibited some strange behavior soon after the birth and despite the best efforts of Shedd's incredible animal health and care experts, it could not be saved. ZooBorns extends its condolences to Shedd Aquarium and its heartbroken staff.

At 6:36 AM yesterday morning, Chicago's Shedd Aquarium welcomed a bouncing baby beluga calf to 23 year old mother, Puiji! Approximately 5' 4" long and 162lbs., the calf has been determined to be male. For many baby animals, the first few hours, days and even weeks are a critical period and during this time the calf will be under 24 hour observation and the beluga enclosure, Secluded Bay, will live up to its name, off limits to everyone except marine mammal staff. This will provide mother and calf time to bond. In the meantime, you can enjoy these brand spanking new baby beluga pictures courtesy of Shedd. 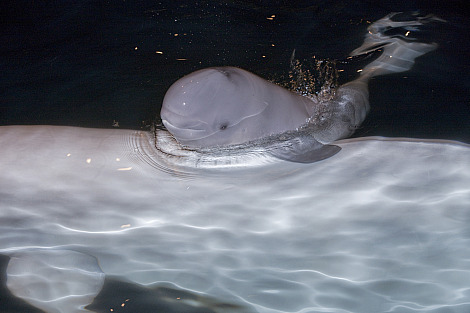 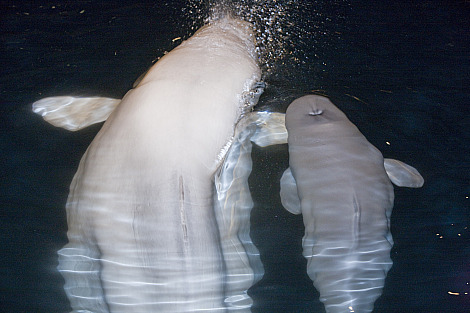 Watch the actual birth! Note that this is a tiny bit graphic for the particularly squeamish.

Additional information and the latest updates available on Shedd's website!

Name the Baby Beluga at the Vancouver Aquarium 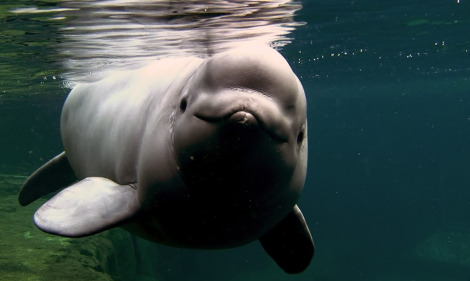 Just a few hours ago at the Vancouver Aquarium, staff watched breathlessly as 20 year old beluga whale Aurora gave birth to a calf. Like all baby belugas, the calf was born with large wrinkles which disappear over the first few weeks. 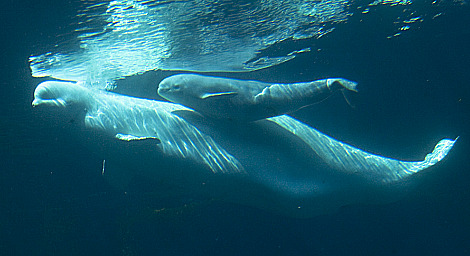 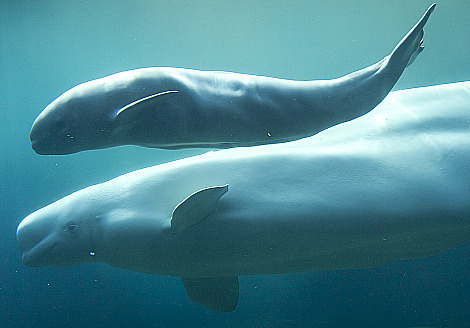 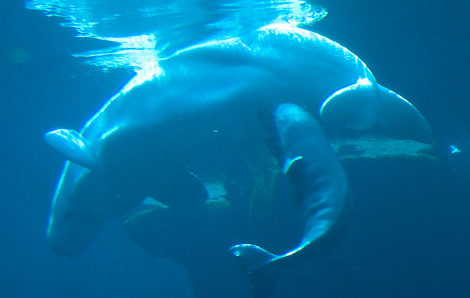 The unnamed calf will be sharing its enclosure with another calf born in the fall of last year named Tiqa. Researchers are interested to see how the two calves interact and we hope to bring you pictures soon.

Video of actual birth can be watched below the fold. Be warned though: like most mammal births, it's a messy (but joyous!) process.