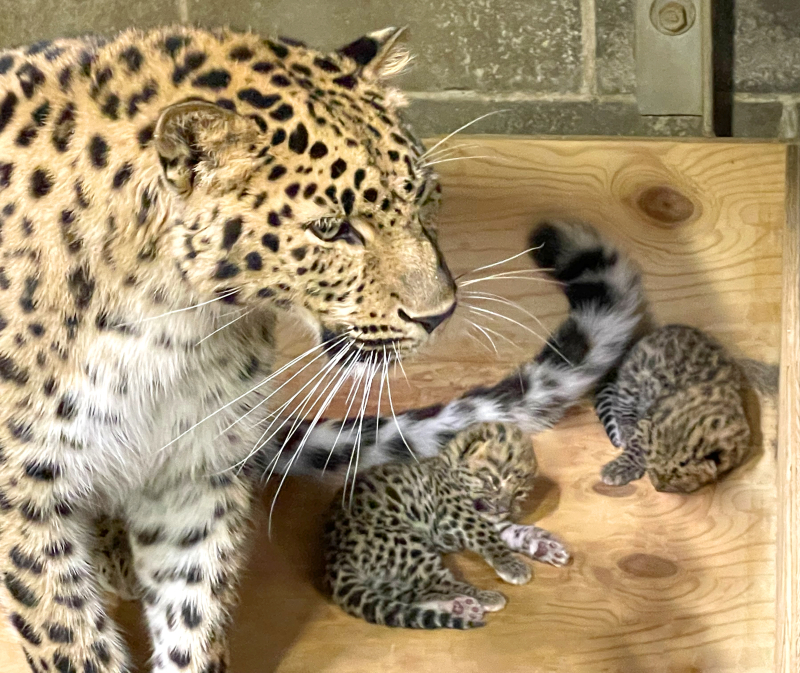 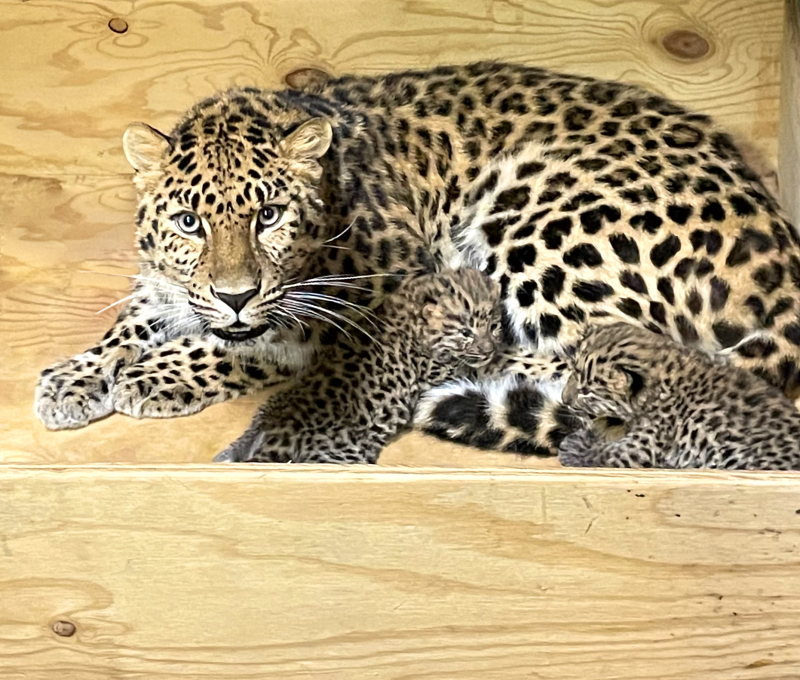 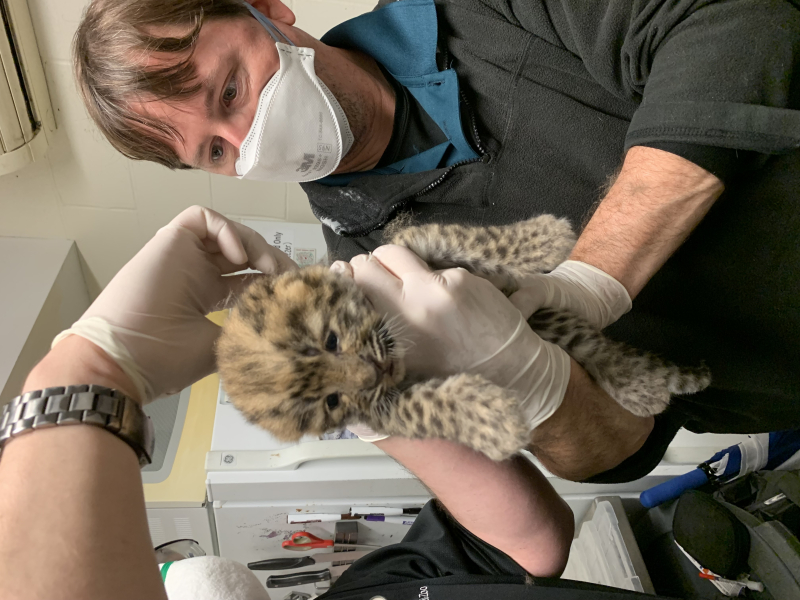 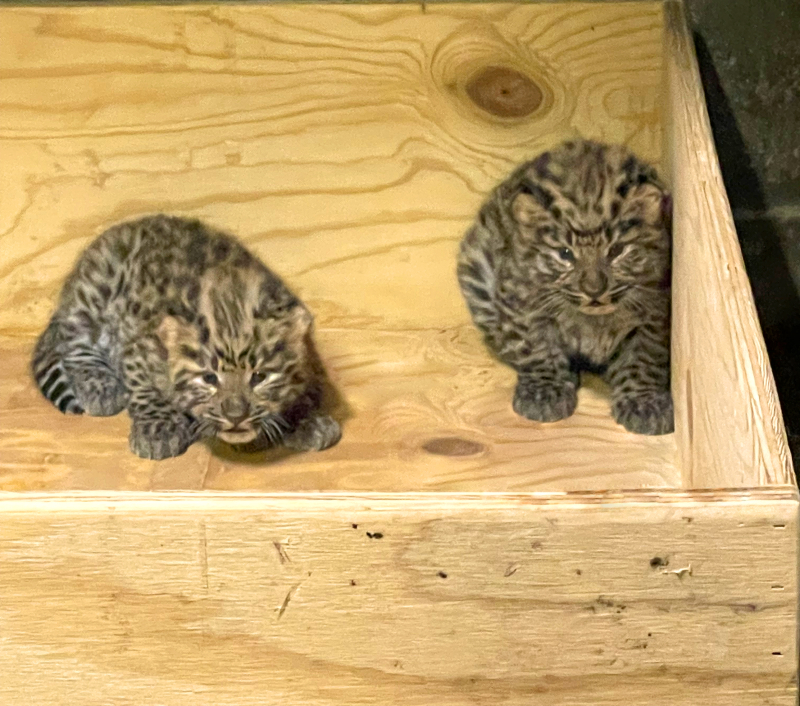 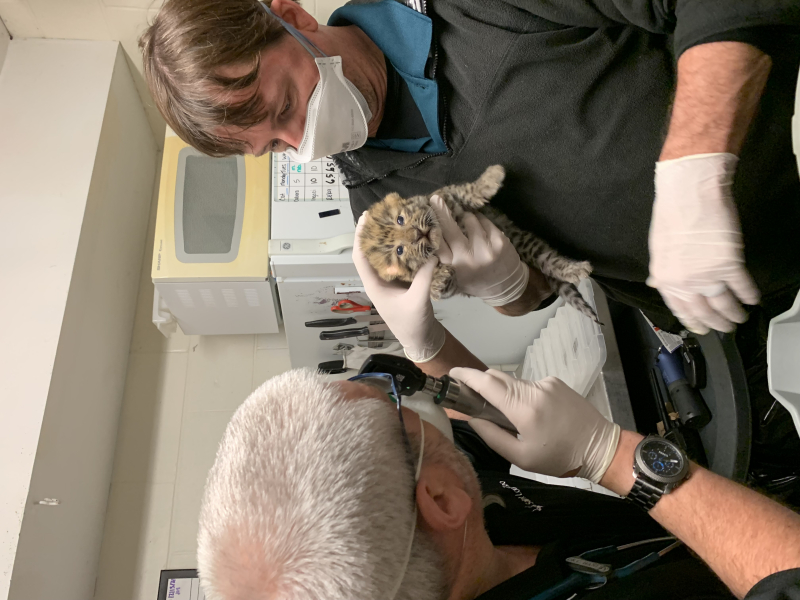 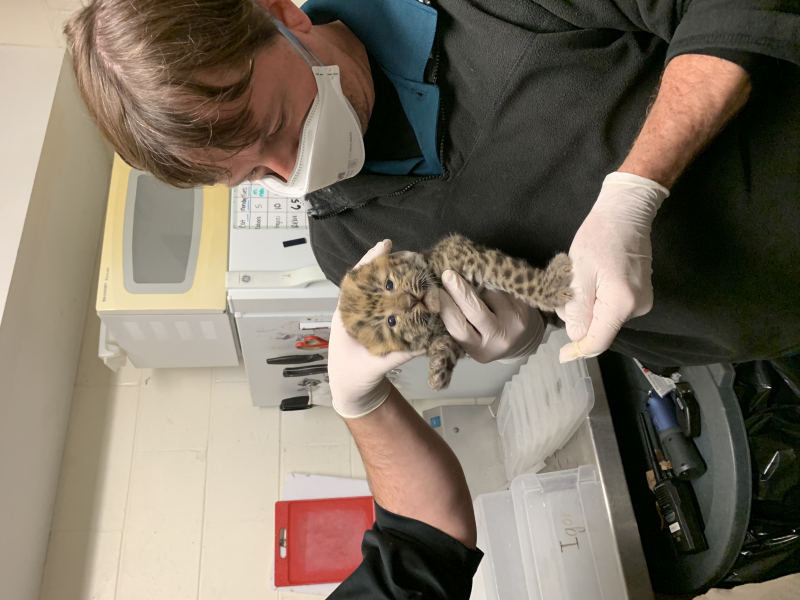 The cubs were named Anya (pronounced AH-na) and Irina (pronounced eye-REE-na), which mean "grace" and "peace," respectively, by the Zoo's Carnivore Care Team. This is the first litter for mother Dorothy, or Dot, age 4, and father Samson, also age 4.

Mother and cubs are doing well and will remain in their private, indoor maternity den inside Big Cat Country for the next few months to allow time for the cubs to grow large enough to safely navigate all of the obstacles in the outdoor habitat. Samson can be seen by Zoo guests in his habitat at Big Cat Country.

"Dot is an excellent mother. It's exciting to see this first-time mom providing great care to her cubs," said Steve Bircher, Kevin Beckmann Curator of Carnivores, Saint Louis Zoo. "There are so few of these rare big cats left in the world and each birth is extremely important for the survival of the species."

The first few months of life are critical for newborn leopards. The animal care team is closely monitoring the family and it appears that both cubs are healthy. On May 5, at 2 weeks old, the cubs had their first well-baby check by the Zoo veterinary care team where they were briefly examined and weighed, then returned to Dot in the maternity den. Each cub weighed nearly 2.5 pounds at that time, which is normal for their age, according to Zoo veterinarians. Adult Amur leopards can weigh between 60 and 125 pounds.

Dot was born at San Diego Zoo and moved to the Saint Louis Zoo in fall 2020. Samson was born at Chicago Zoological Society's Brookfield Zoo and moved to the Zoo in fall 2021. The two were paired on a breeding recommendation by the Association of Zoos and Aquariums Amur Leopard Species Survival Plan, a program responsible for maintaining a genetically healthy population of Amur leopards in North American zoos.

Fewer Than 100 Left in the Wild

"There are more Amur leopards in human care than exist in the wild," said Bircher. "In all, the population of Amur leopards in zoos all around the world numbers just about 300 individuals. Without the conservation effort of zoos, this species could go extinct, due to loss of genetic diversity and other threats to its survival in the wild, including habitat loss due to logging activities, human encroachment and poaching."

Amur leopard cubs are born after a gestation period of approximately 100 days. In the wild, cubs stay with their mother for about 1½ years. Young females may continue to share the mother's territory as they mature. Young males must establish their own territories elsewhere.

About the Saint Louis Zoo

Home to over 14,000 animals, representing nearly 500 species, the Saint Louis Zoo is recognized worldwide for its innovative approaches to animal care and management, wildlife conservation, research, and education. One of the few free zoos in the nation, the Saint Louis Zoo attracts approximately 3 million visitors annually and is the most-visited attraction in the region. Accredited by the Association of Zoos and Aquariums (AZA), the Saint Louis Zoo is part of an elite group of institutions that meet the highest standards in animal care as well as provide fun, safe and educational family experiences. The Saint Louis Zoo and the other AZA-accredited institutions collectively dedicate millions of dollars annually to support scientific research, conservation and education programs. For more information, visit stlzoo.org.