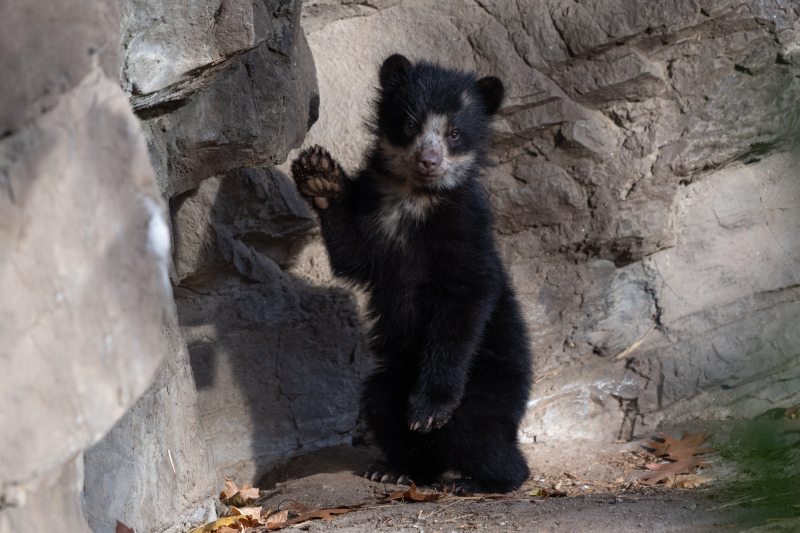 The cubs, a male and a female, have yet to be named. They were born this summer to dam, Nicole, and sire, Bouba. This is the third successful litter for Nicole and Bouba, who have now produced five offspring.

After spending their first months in a den nursing and bonding with their mother, the cubs have now started to venture into the zoo’s outdoor bear habitat and are actively exploring their new surroundings. Queens Zoo guests can now see the cubs, but exhibit times will vary as they continue to acclimate to their exhibit.

The Queens Zoo is breeding Andean bears as part of the Species Survival Plan (SSP), a cooperative breeding and management program administered by the Association of Zoos and Aquariums (AZA) to maintain genetic diversity and demographic stability in zoo populations.

“The Queens Zoo has a successful breeding program for Andean bears and has been an integral participant in the SSP for several years,” said Mike Allen, Queens Zoo Director. “Andean bears face significant challenges in the wild due to habitat fragmentation and poaching.  It’s important for us to invest both in conservation programs to protect them in their native habitat and to maintain a healthy insurance population in zoos. These youngsters will surely captivate our guests and help people make a connection with the species.”

Andean bears are the only bear species native to South America. They are also known as spectacled bears due to the markings on their faces that sometimes resemble eyeglasses. They have characteristically short faces and are relatively small in comparison to some other bear species. As adults, males weigh between 250-350 pounds while adult females rarely exceed 200 pounds.

Andean bears are classified as Vulnerable by the International Union for the Conservation of Nature (IUCN). Estimates indicate that there are fewer than 18,000 remaining in the wild. Wildlife Conservation Society scientists work actively to monitor and protect habitat for Andean bears and a host of other species throughout the Andes.

The cubs, a male and a female, have yet to be named. They were born this summer to dam, Nicole, and sire, Bouba. This is the third successful litter for Nicole and Bouba, who have now produced five offspring.