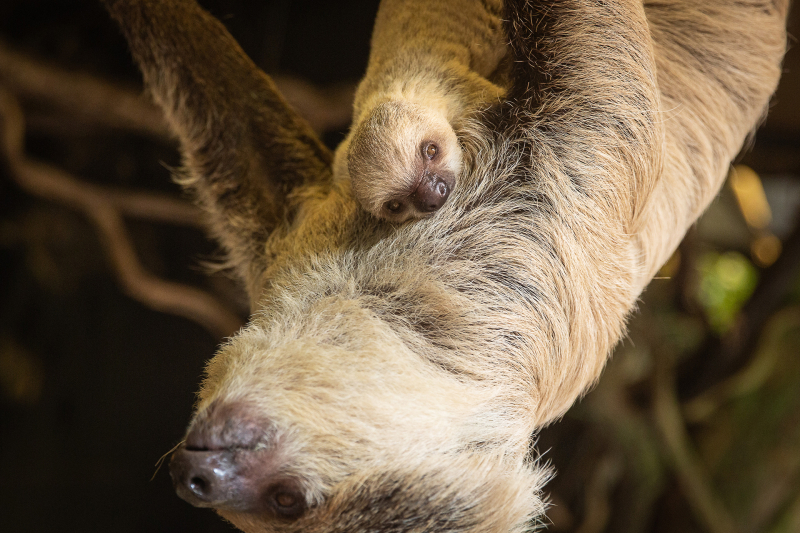 Satisfied all was well, keepers got on with making breakfast for all the animals, returning less than an hour later to find that Marilyn had calmly gone into labour and given birth - with a speed uncharacteristic of the notoriously slow-moving species.

London Zoo sloth keeper Marcel McKinley said: “We knew Marilyn was coming to the end of her pregnancy, so we’ve been keeping a close eye on her, arranging regular ultrasounds with the Zoo’s vet team and checking every day for signs of the new arrival.

“We looked in on her first thing and there was no baby - and no sign at all that she was labour.

“Less than an hour later I spotted something that looked like a tiny arm, tucked into Marilyn’s tummy; I called the rest of the team to confirm my eyes weren’t playing tricks on me, and they arrived just in time to see her turn around in the tree and give us the perfect view of her healthy newborn - who she’d quietly delivered, with no fuss at all, while we’d been chopping up sweet potato for her breakfast. She clearly took the whole thing in her stride.”

Visitors to London’s famous conservation zoo will now be able to spot Marilyn and her little one in Rainforest Life, the only living rainforest in the city - a lush, tropical paradise, heated to 28°C all year round, which the family shares with titi monkeys, tree anteaters, golden-headed lion monkeys and red-footed tortoises.

Nocturnal mammals native to South America, two-toed sloths (Choloepus didactylus) have evolved for millions of years in a relatively stable climatic environment and are vulnerable to even small changes in temperature and weather - unlike many other mammals, sloths are unable to regulate their own body temperature, and so are particularly threatened by the global issue of climate change. As well as working on the ground to protect threatened species around the world, scientists and conservationists from ZSL, the conservation charity behind London Zoo, are at COP26 in Glasgow urging world leaders to tackle biodiversity loss and climate change in unison in order to save our planet.

Keepers won’t know the youngster’s sex until confirmed by vets after hair DNA is analysed. Boy or girl, the newborn is a valuable addition to its species and once its sex is confirmed, its details will be added to the European Studbook (ESB), part of a coordinated breeding programme for two-toed sloths.

Marcel added: “At two-weeks-old, Marilyn’s little one is doing really well. Two-toed sloths have a gestation period of 10 to 11 months and infants are already physically well-developed when they’re born, meaning they’re able to eat solid food right away.

“We’ve named the youngster Terry, after one of the Zoo’s longest-serving zookeepers - our colleague Terry March, who has devoted his whole life to caring for threatened species and educating the public about wildlife.”

ZSL is urging world governments and policy makers to put nature at the heart of all decision making in order to jointly tackle the combined global threats of climate change and biodiversity loss - and are calling on leaders to make this commitment at COP26 in Glasgow. Find out more and support ZSL's world-leading conservation work by visiting ZSL London Zoo or donating online. Visit www.zsl.org/natureatheart to find out more.