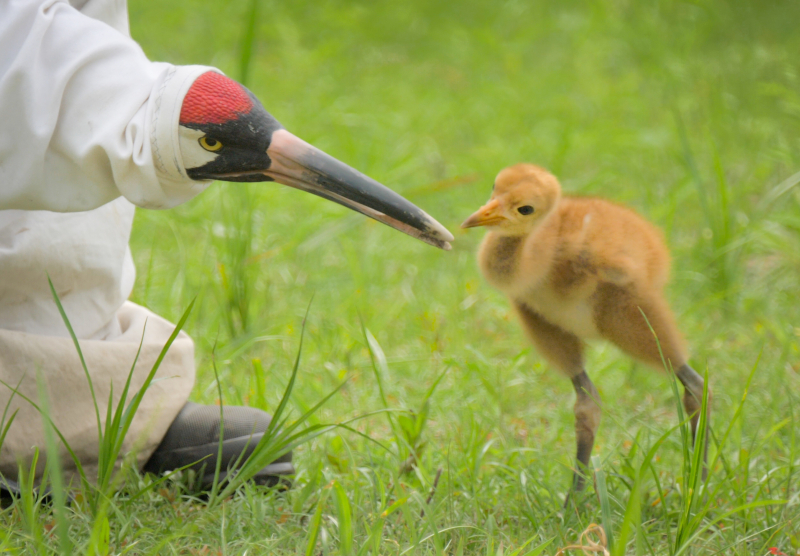 “We are thrilled to have bounced back in the wake of the pandemic,” said Freeport-McMoRan Audubon Species Survival Center Assistant Curator Richard Dunn. “These chicks represent the collaborative effort that we and our partners share in making an impact on the survival on this precious species.”

There are currently 78 whooping cranes in the wild in Louisiana. Whooping cranes have been assessed by the International Union for Conservation of Nature as endangered, and Audubon is one of only seven whooping crane breeding facilities in North America.

“Hancock Whitney is proud to partner with Audubon to support whooping crane conservation efforts,” said Hancock Whitney Senior Regional President Gary Lorio. “The team at Audubon does amazing work to preserve these creatures and we are looking forward to returning these chicks to the wild off the coast of Louisiana in the fall.”

The Louisiana wild whooping crane flock was established in 2011 when 10 cranes from the U. S. Geological Survey’s Patuxent Wildlife Research Center in Maryland were released to the Louisiana Department of Wildlife and Fisheries’ White Lake Wetlands Conservation Area in Vermilion Parish. This marked a significant conservation milestone with the first wild whooping cranes in Louisiana since 1950. In 2016, the first chicks hatched in the Louisiana wild since 1939—a significant sign of recovery for the species.

Along with whooping cranes, Audubon has also seen success this year with Mississippi sandhill crane births, with eight chicks hatched. These births help bolster the population of this North American crane subspecies and add to the more than 200 chicks produced at the Survival Center. With most of the chicks being released back into the wild, the goal of the recovery program is to create a self-sustaining population of Mississippi sandhill cranes.

The U.S. Fish and Wildlife Service (USFWS), Louisiana Department of Wildlife and Fisheries (LDWF), and Audubon have been longtime leaders in whooping crane conservation and are continuing to expand their partnership with the goal of developing a self-sustaining Louisiana whooping crane population. This partnership is an example of the importance of collaboration between federal and state agencies and non-profit organizations, leveraging the strengths of all to achieve measurable conservation results and make a significant, historic impact on the future of this species. Through this partnership and with the support of USFWS, Chevron, and other generous supporters, Audubon is committed to the long-term growth and stability of the whooping crane population to save the species from extinction.

Anyone encountering a whooping crane is advised to observe the bird from a distance and to report the sighting to LDWF https://www.wlf.louisiana.gov/page/report-a-whooping-crane-sighting-or-violation. Whooping cranes are large-bodied, long legged, white birds with a red head and black facial markings on the side of its face. Birds measure a height of five feet and a wingspan of seven to eight feet, which makes them very distinctive. In flight, whooping cranes display black wing tips, a fully extended neck, and legs that extend well beyond the tail.