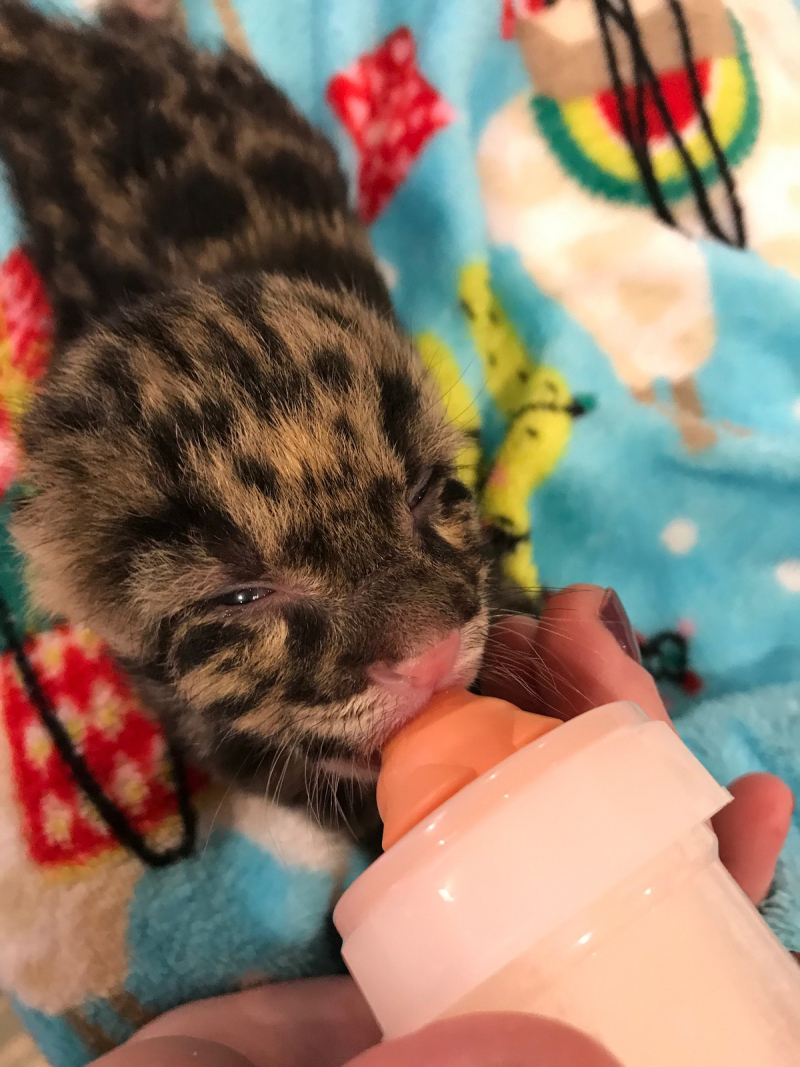 The first Clouded Leopard to be born from artificial insemination using frozen/thawed semen has given birth to two cubs at the Nashville Zoo. 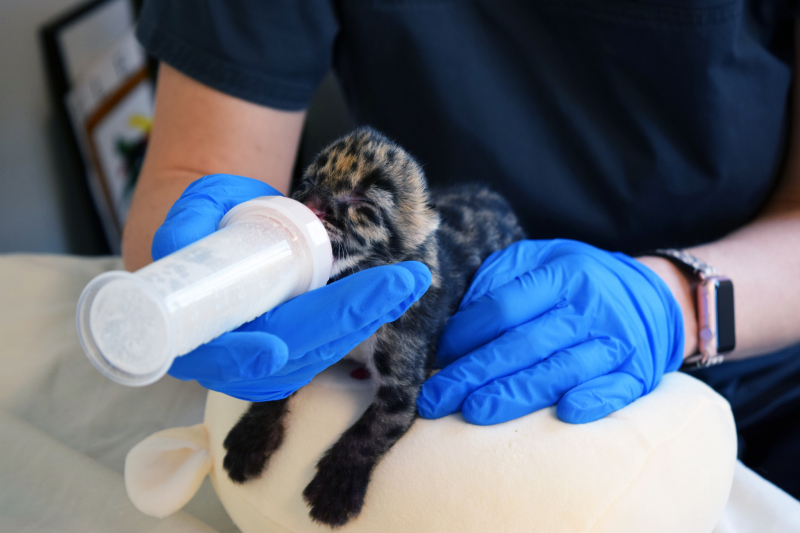 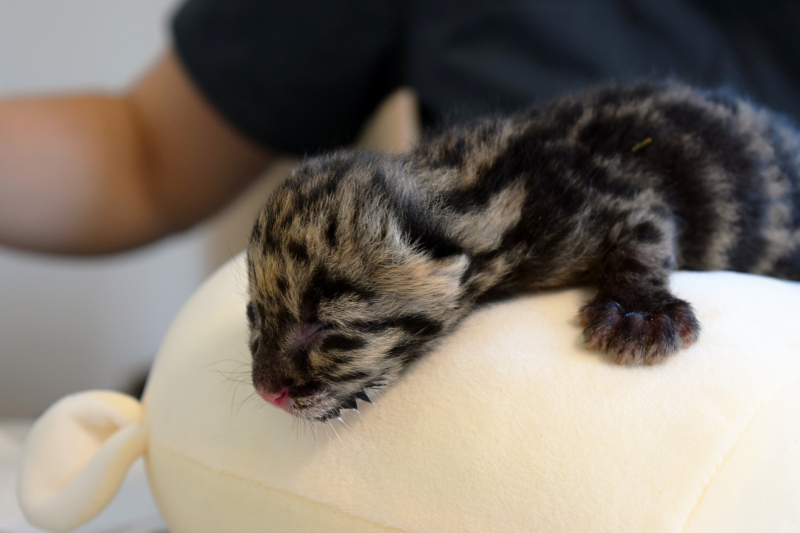 With the addition of these cubs, the zoo is now home to eight Clouded Leopards.

Nashville Zoo has been working with these cats since 1987 and has welcomed 34 cubs since 2009. There are currently 69 Clouded Leopards in the Association of Zoos and Aquariums’ care and 292 in facilities globally.

Niran and one-year-old Ron, the father, are living behind the scenes, and the cubs will be placed in the HCA Healthcare Veterinary Center neonatal animal care room within a week. The cubs will stay at Nashville Zoo for now with plans to eventually introduce them to a potential mate at another zoo.

Nashville Zoo is part of the Clouded Leopard Consortium and also part of the Clouded Leopard Species Survival Plan®. Dr. Robertson is the nationwide vet advisor for this species. Much of the information known about this species is because of the collaboration between Nashville Zoo, Smithsonian's National Zoo, Khao Kheow Open Zoo in Thailand and The Zoological Parks Organization of Thailand.

Clouded Leopards are listed as Vulnerable by the International Union for Conservation of Nature.  They are protected in much of their range, which spans from the Himalayan foothills to Southeast Asia, but enforcement of those protections is weak. Precise data on Clouded Leopard population numbers in the wild is not known. The reduced number of pelts encountered at markets and reduced sightings of Clouded Leopards by people within its range suggest the species is in decline. 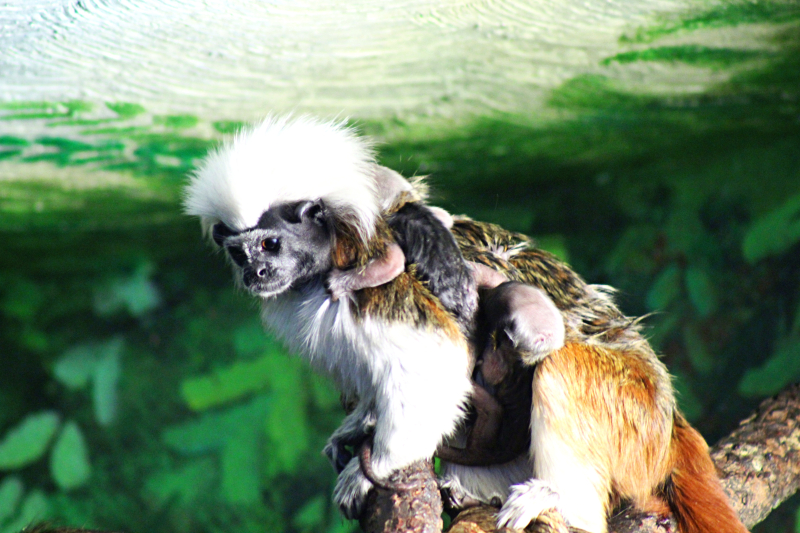 Early in the morning on March 28, the care team at John Ball Zoo discovered not one, not two, but three Cotton-top Tamarin babies had been born overnight.

The birth of triplets in this species is unusual. Most often, females give birth to twins. So far, parents Lilo and Kevin are providing excellent care for their trio of newborns. 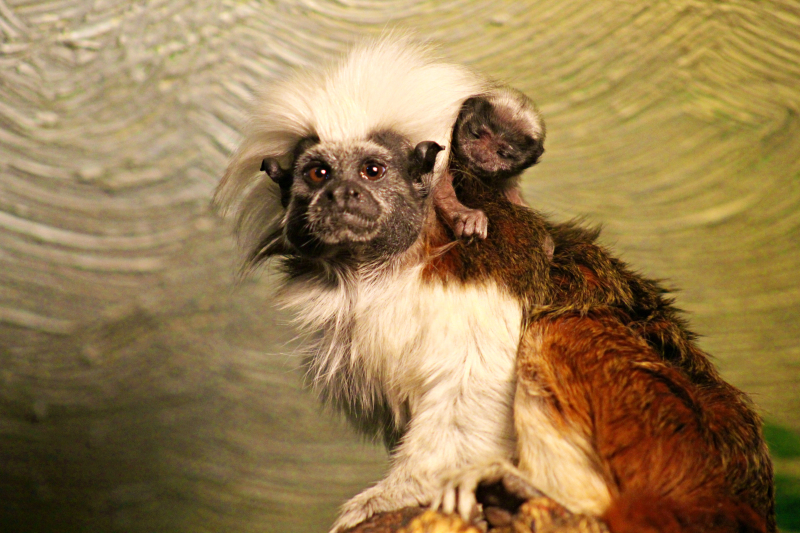 These tiny primates live in small family groups, with the males and other troop members helping to care for infants. Adults weigh only about one pound.

About 6,000 Tamarins are thought to survive in the wild. It is believed that 40,000 Tamarins were collected and sold for biomedical use before 1976, when international trade was banned. 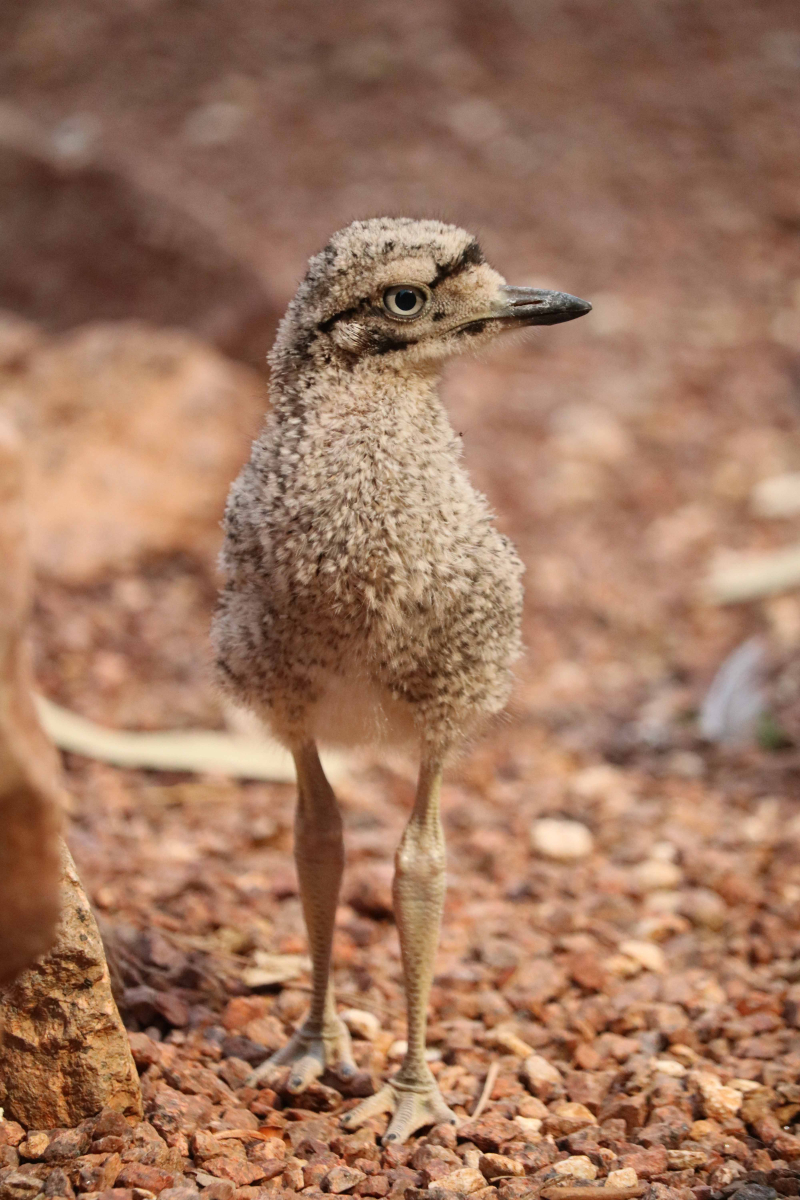 Omaha’s Henry Doorly Zoo and Aquarium hatched a Cape Thick-knee Chick on March 14. The chick, which is the first since 2015, can be seen in the Desert Dome with its parents.

Although the species is free ranging, they spend most of their time in the Australian section of the zoo’s Desert Dome. This is the first chick for the adult pair who arrived at Omaha’s Henry Doorly Zoo and Aquarium in 2017. 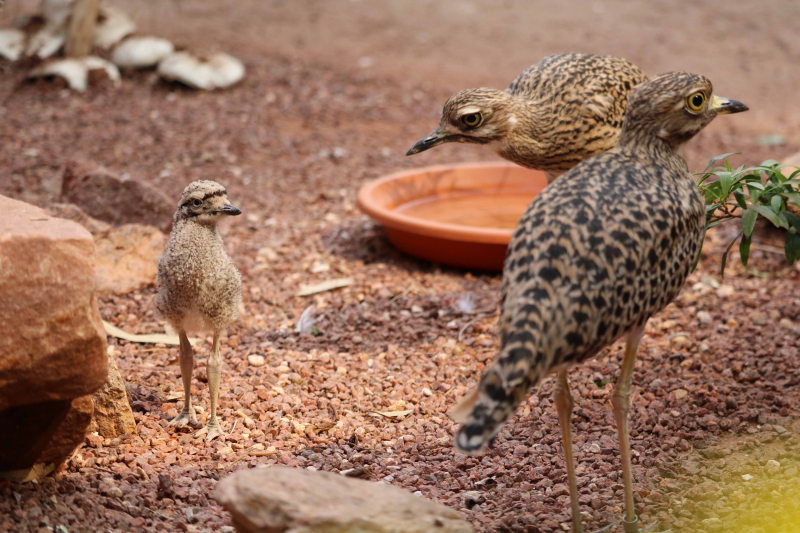 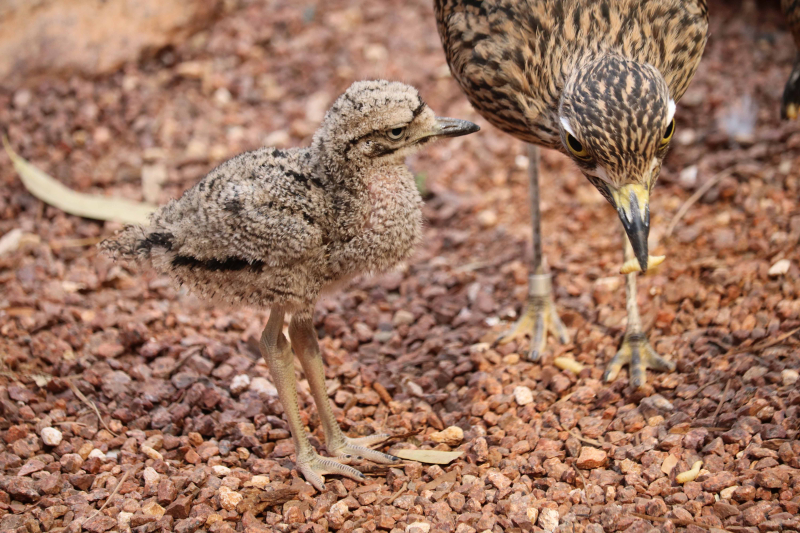 Cape Thick-knee breeding pairs typically raise one to two chicks at a time. They are very protective parents who will go to great lengths to protect their young. The birds will sometimes perform dramatic “injury displays” to lure predators away from their nest. Both parents take an active role in feeding their chicks.

The Cape Thick-knee (Burhinus capensis) is native to southwestern and southern Africa within savannas, dry grasslands and thorn scrub areas. The species primarily feed on insects, such as crickets, grasshoppers and mealworms, but will also eat small mammals and lizards. 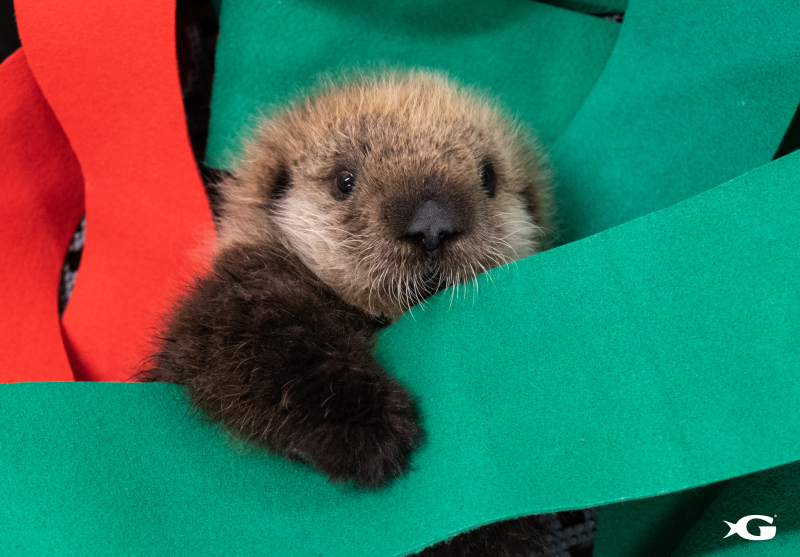 A pair of rescued Southern Sea Otters has made their way to the Georgia Aquarium after being found stranded near the California coastline. Mara, a female, is approximately eleven-weeks-old, and Gibson, a male, is approximately five-weeks-old. They will stay in a behind-the-scenes area of the Aquarium for the foreseeable future while they acclimate to their new home.

Mara was stranded at approximately one-week-old near Port San Luis in San Luis Obispo County, California on January 17, 2019. She was rescued, and efforts made to locate her mother were unsuccessful. After being cared for at another facility in the Golden State, she was deemed non-releasable by the U.S. Fish and Wildlife Service and the search for a permanent home began.

Georgia Aquarium was selected as Mara’s new home due to its ability to care for a young pup that requires round-the-clock care. The Aquarium staff was in California preparing Mara for her trip to Atlanta, when unfortunately, another pup stranded.

Gibson was found at approximately three-weeks-old on March 12 near the Carmel River in California where he was separated from his mother during a large storm. The response team tried to return him to his mother, who was visible and vocalizing, but the storm surge made it near impossible. After those attempts were unsuccessful, the only option for him was euthanasia. Given the Aquarium’s expertise and already planned transport back to Atlanta with Mara, an emergency placement request was made so that Gibson would call Georgia Aquarium home, too.

If a permanent home had not been available for either of these pups, they would have been euthanized. 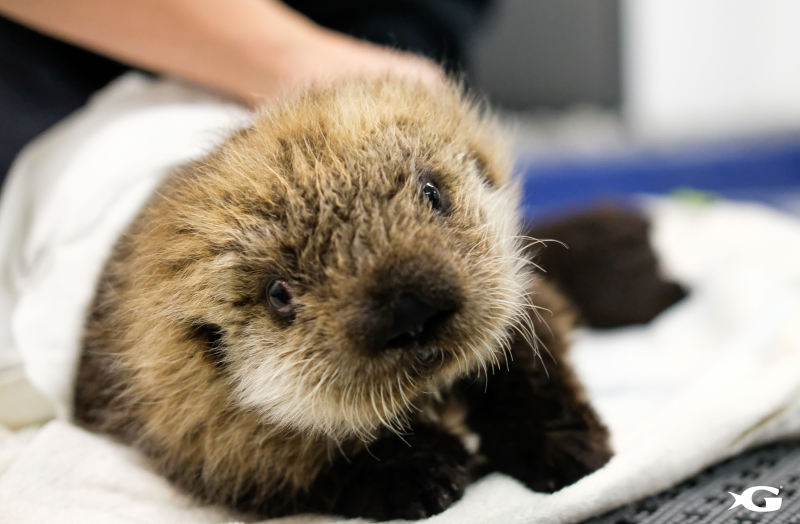 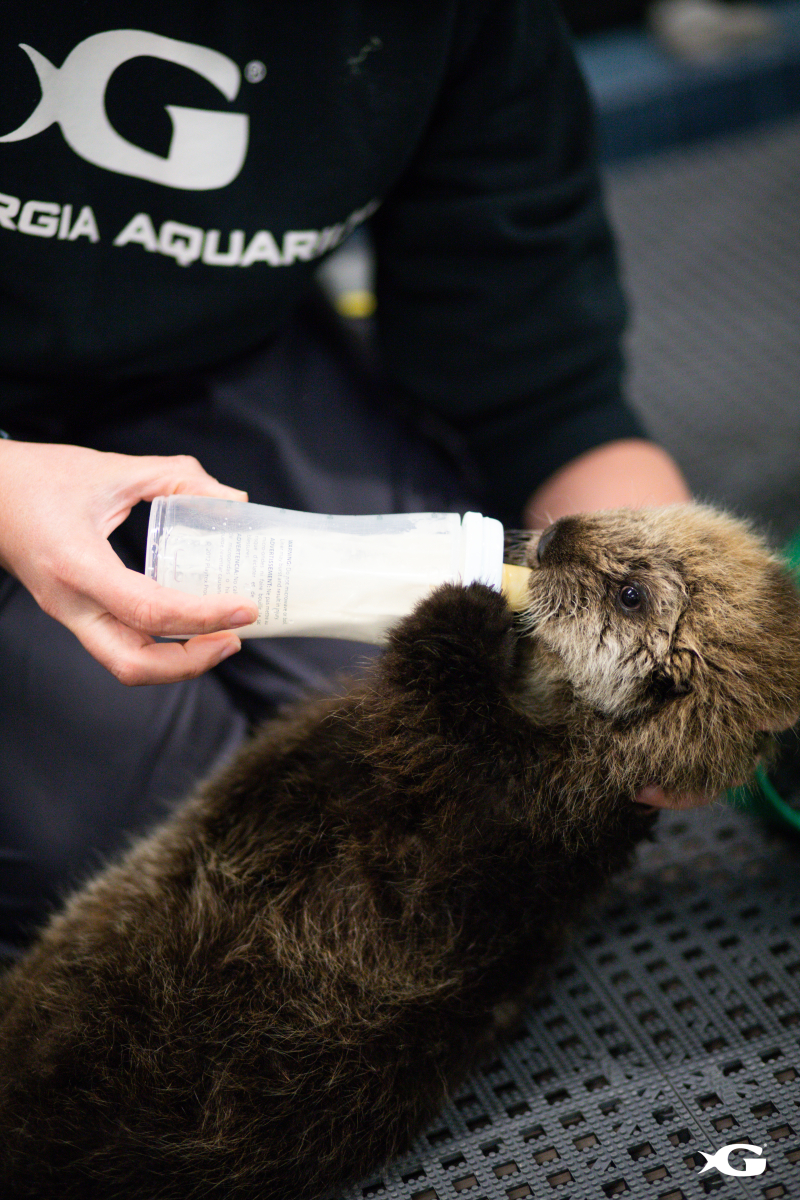 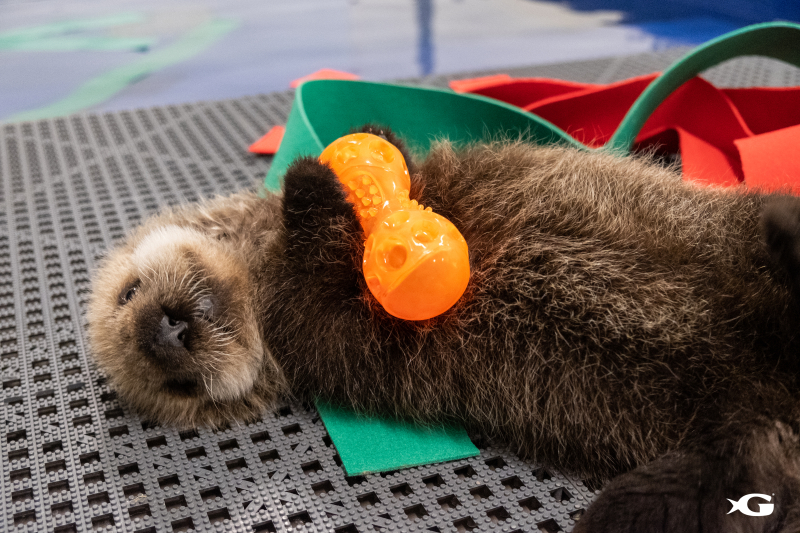 To get the pups back to Atlanta as quickly and with as little stress as possible, the animal care and veterinary staff flew them directly from Monterey, California to Atlanta on a private jet. With the otters’ health and wellbeing in mind, the jet was cooled to approximately 60-65 degrees Fahrenheit and supplied with plenty of ice to keep these cold-weather mammals cool.

Once they arrived in Atlanta, they were put into a behind-the-scenes area where they will remain while they are under 24-hour watch and care. Mara is currently eating solid fish and swimming on her own, but Gibson, the younger of the two, is still being bottle-fed.

It's important for both of them to learn how to be a Sea Otter, grow, and adjust to their new environment before going on exhibit in the Cold Water Quest gallery with the other resident Sea Otters: Brighton, Bixby, and Cruz. 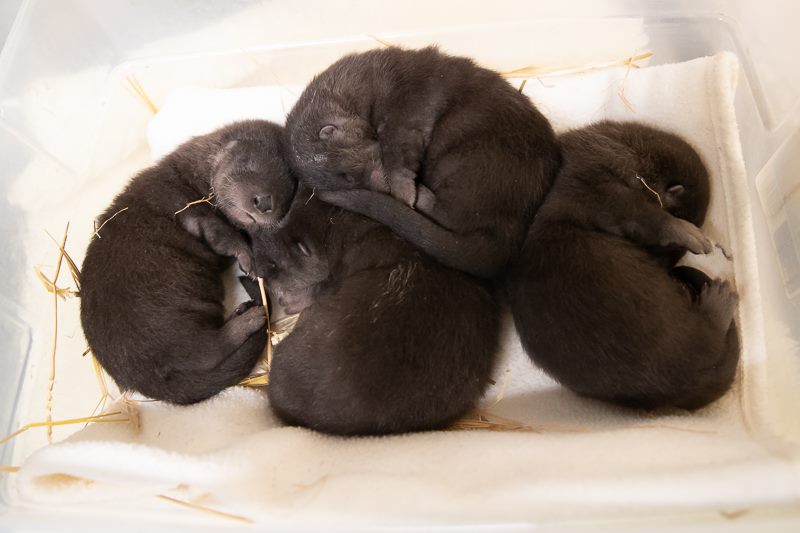 Woodland Park Zoo is excited to announce that a North American River Otter gave birth to four pups on March 16. The pups are the first offspring for mom, Valkyrie, and dad, Ziggy (both 5-years-old).

As far back as the Zoo’s animal records go, the pups are the first River Otter birth documented in the Zoo’s 119-year history! 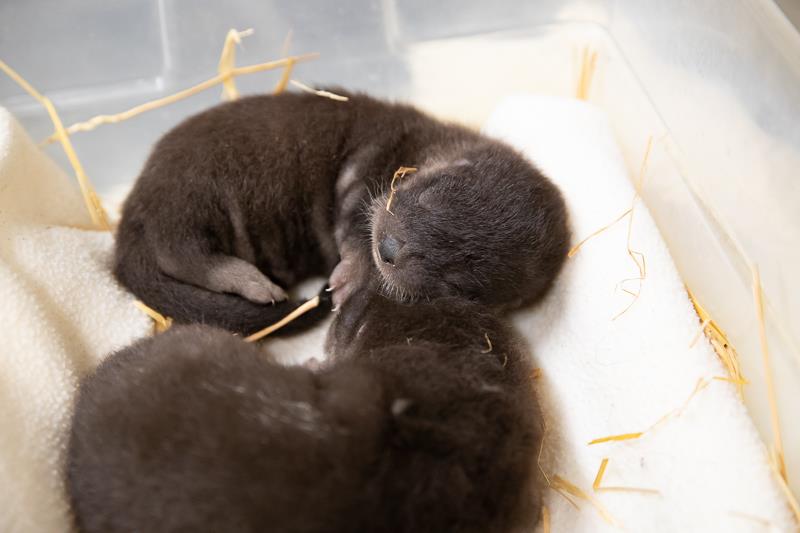 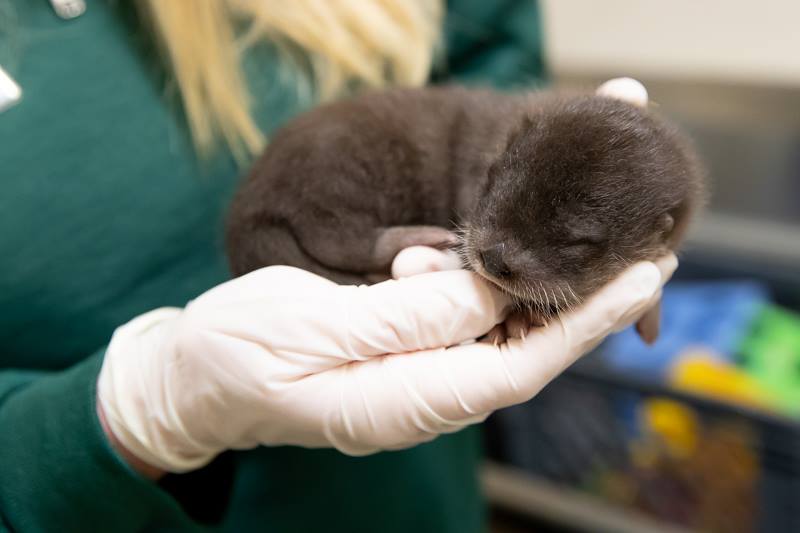 Woodland Park’s animal health team was able to do a wellness check on the pups and confirmed there are two females and two males. The pups weigh between 10 and 12 ounces each.

The gestation period for River Otters is 68 to 72 days. Pups are born blind and completely helpless, relying solely on mom for care during their first year. They open their eyes at about a month old.

Over the next several weeks, Valkyrie and her pups will remain in an off-view, climate-controlled den where the new family can nurse and bond in a quiet environment.

Animal care staff are closely monitoring the new family via a den cam. “The first year is crucial for otter pups. Because Valkyrie is a first-time mother, we want to be sure she’s providing appropriate care for each pup,” said Deanna DeBo, an animal care manager at Woodland Park Zoo. “We’re happy to report each pup has a fully belly, a good sign they’re nursing. She’s being a good mom and providing attentive maternal care.”

The father, Ziggy, is currently separated and can be seen in the Northern Trail exhibit with the Zoo’s other River Otter, a 21-year-old male named Duncan. 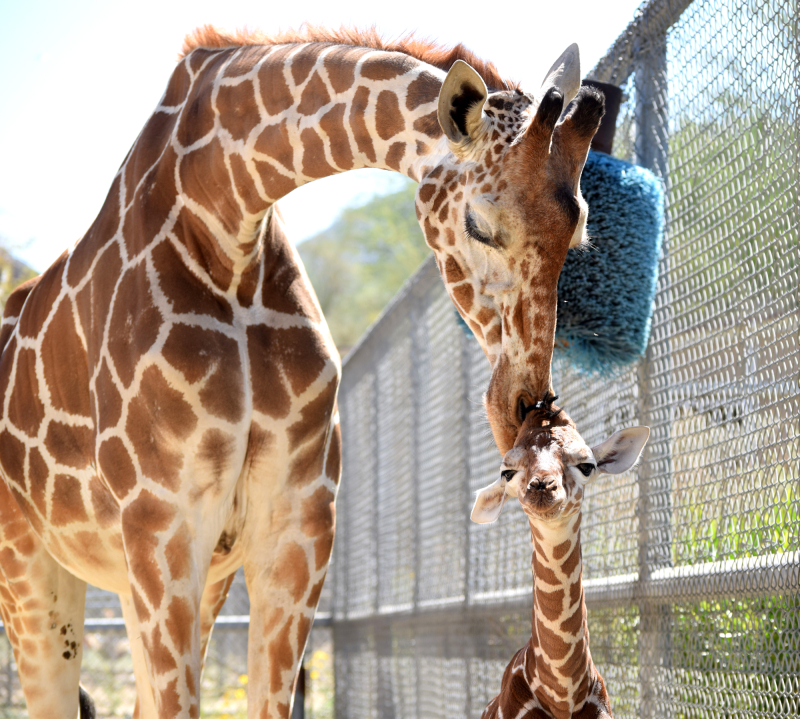 In the early morning hours of the first day of spring, March 20, The Living Desert Zoo and Gardens welcomed a female Giraffe calf to the herd. Born to mother, Dadisi, and father, Hesabu, the female calf weighed in at 149.6 pounds (68kg) and stood at 6 feet 1 inch tall.

“We are thrilled to share the news of this new addition. Mother and calf are doing very well and are currently bonding behind-the-scenes,” said Allen Monroe, President/CEO of The Living Desert. “Guests will have the opportunity to see mother and calf in the near future and I know they will be delighted when they see the pair.” 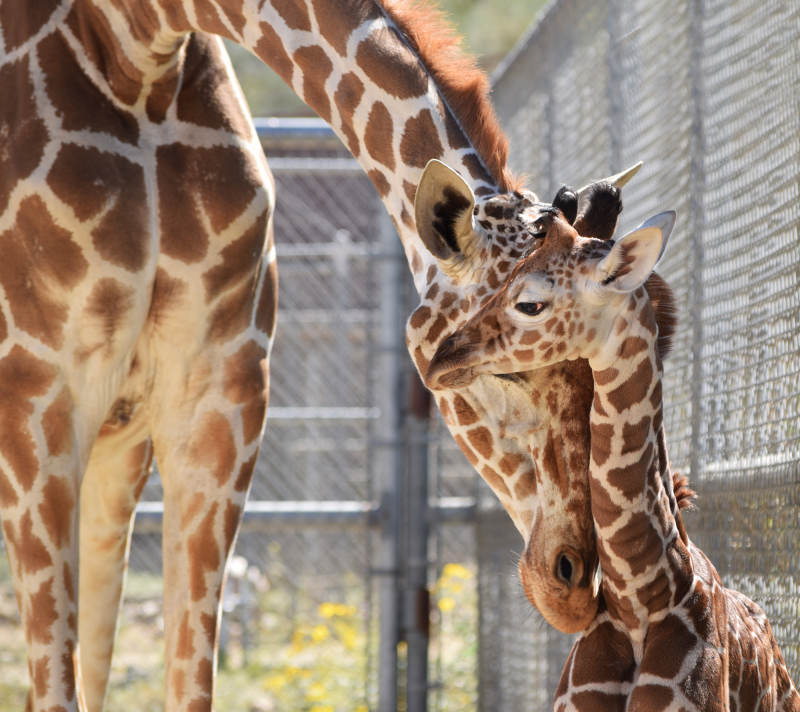 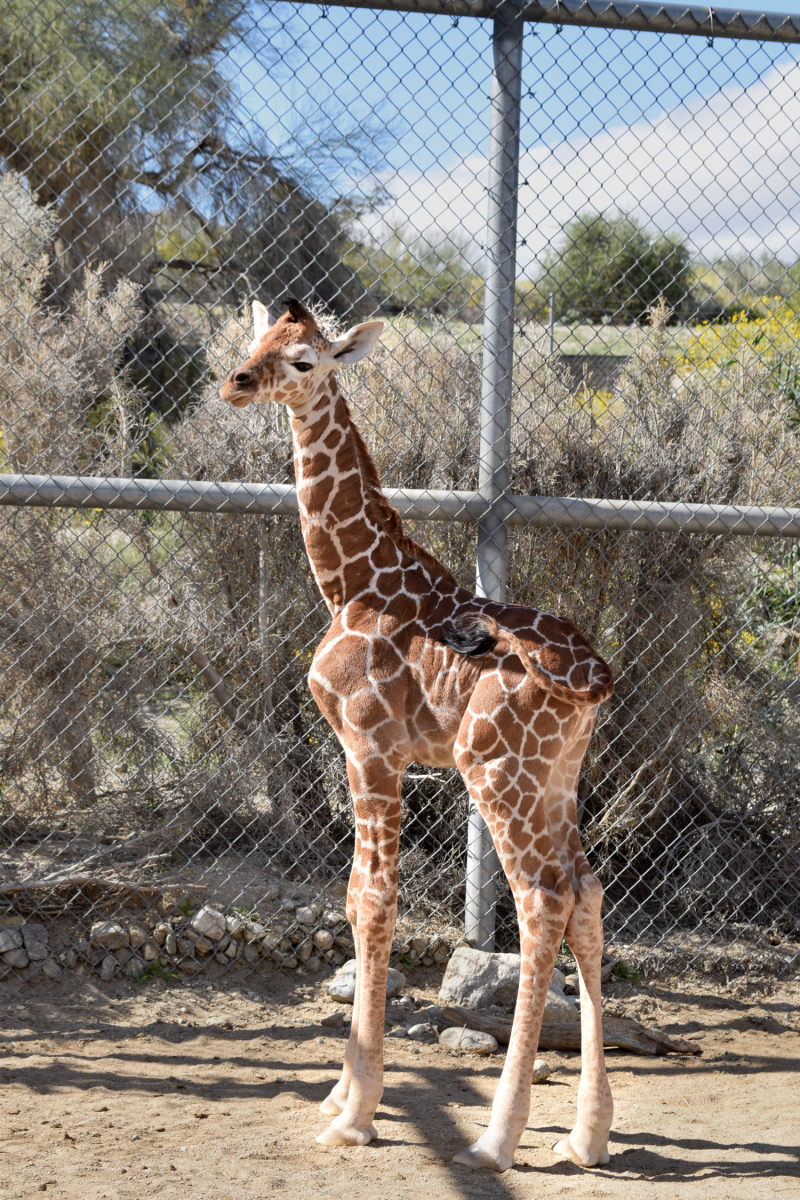 This is the eighth calf for mom, Dadisi, who is 18 years old and has lived at The Living Desert since 2002. This is her third female calf. Dadisi is also mom to 18-month-old, Shellie Muujiza. This is the tenth calf for father, Hesabu, who passed away in December of 2018 after a rapid decline in his health. The Living Desert Zoo and Gardens, in Palm Desert, CA, is home to a herd of nine Giraffe: five males and four females.

“The Living Desert fondly remembers Hesabu with the birth of this calf,” said RoxAnna Breitigan, Director of Animal Care at The Living Desert. “Hesabu’s legacy will continue to live on through his offspring, helping to build connections with our guests and fostering appreciation for the natural world.”

“Dadisi and her calf have bonded and are doing very well. The well-baby exam showed that all her vitals are within the normal range and she is progressing as expected,” said Dr. Andrea Goodnight, Head Veterinarian at The Living Desert. “She is tall, healthy and absolutely adorable.”

Giraffe gestation is about 15 months. The calf will nurse for nine to 12 months, and begin eating foliage around two months old. The Giraffe will double her size in the first year of her life. Giraffe have their own individual spot-like markings and no two have the same pattern, similar to humans’ unique fingerprints.

Currently listed by the IUCN (International Union for Conservation of Nature) as “Vulnerable”, Giraffe populations have declined up to 40% over the last 30 years. There are fewer than 98,000 Giraffe in the wild. Native to southern and eastern Africa, major threats to their population is habitat loss and fragmentation, civil unrest, and ecological changes.