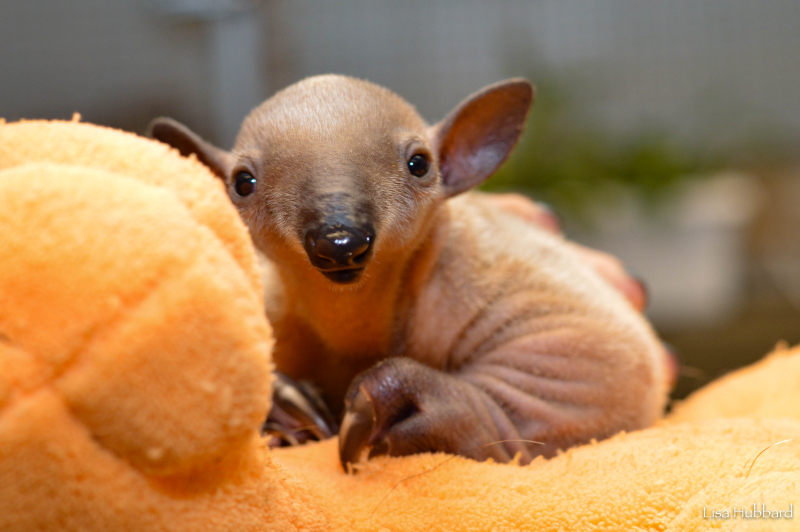 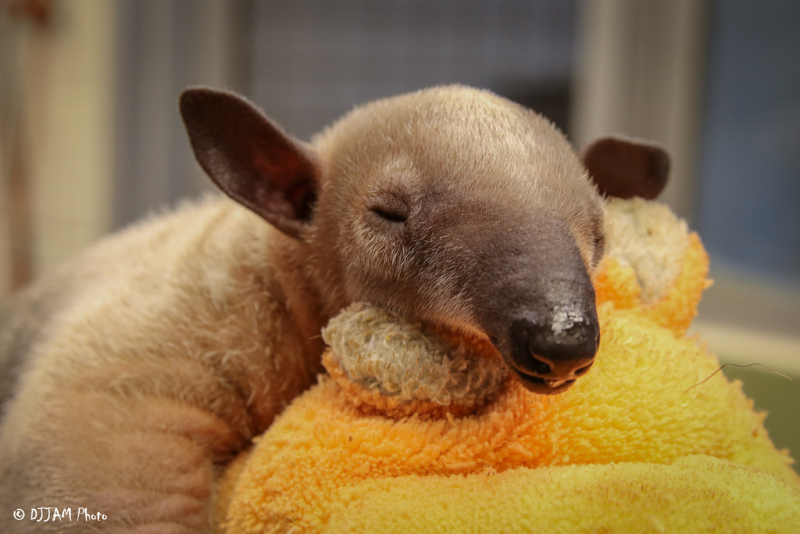 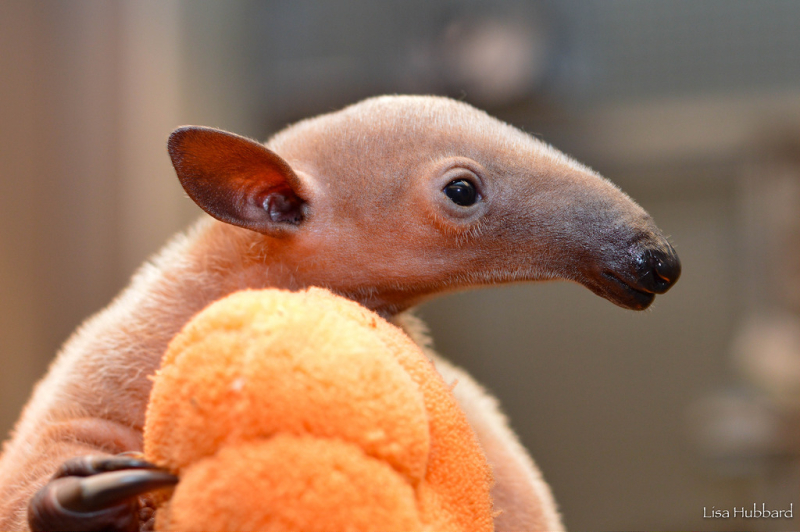 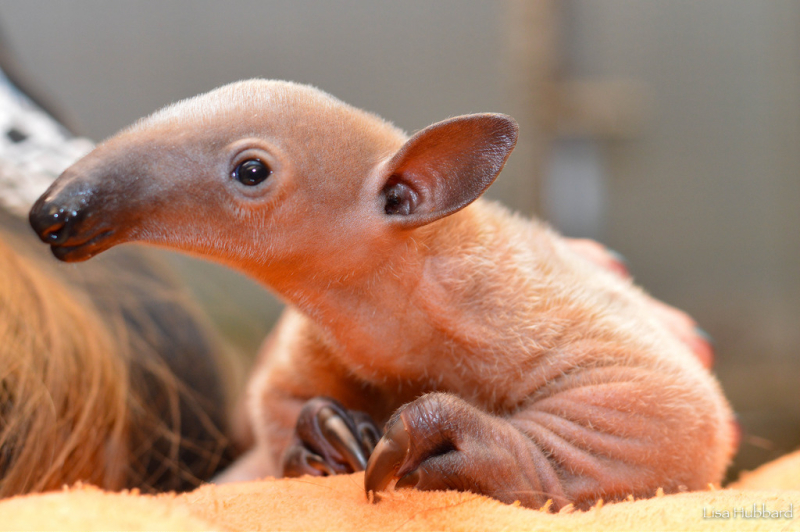 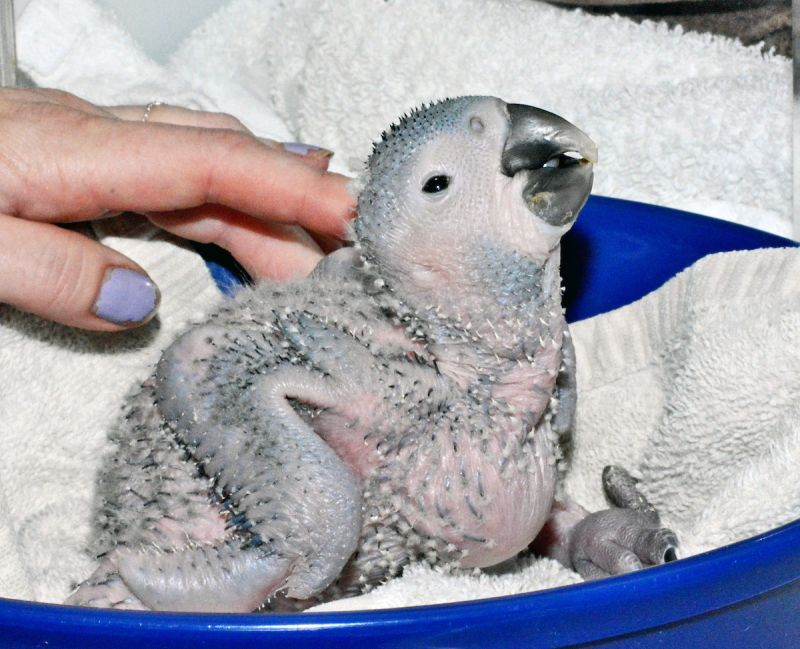 The Los Angeles Zoo is celebrating the arrival of two tropical Snake species and a Blue-throated Macaw, one of the rarest birds in the world. 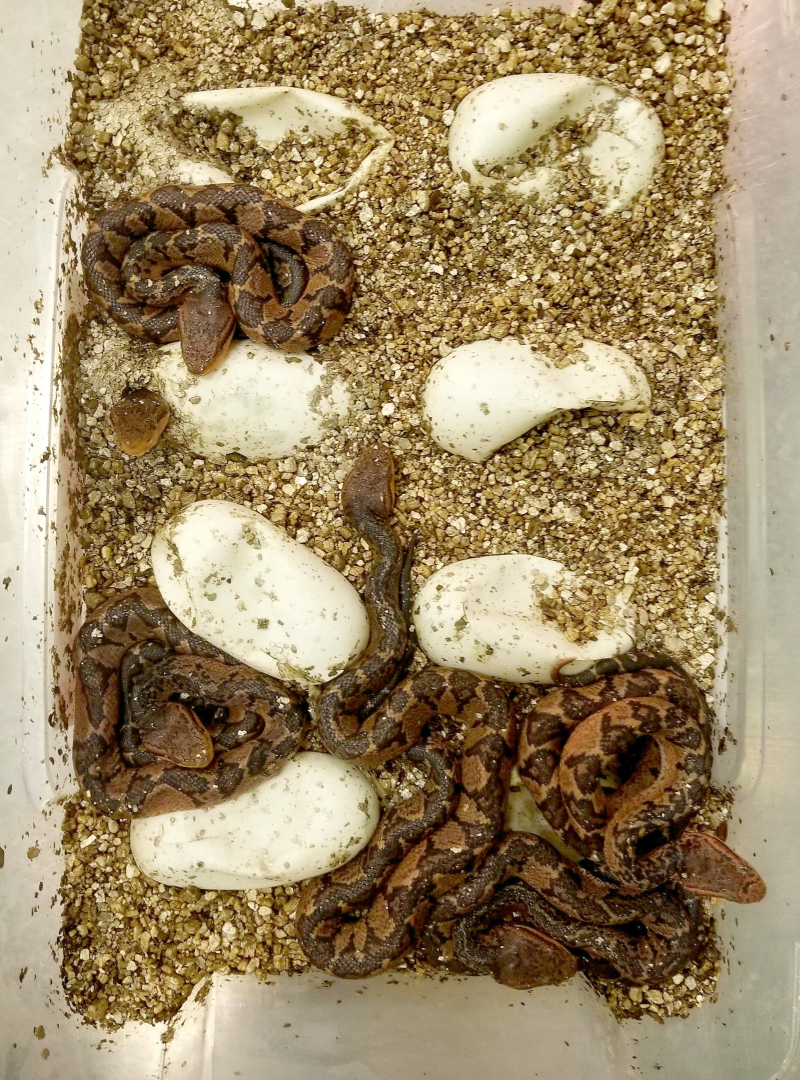 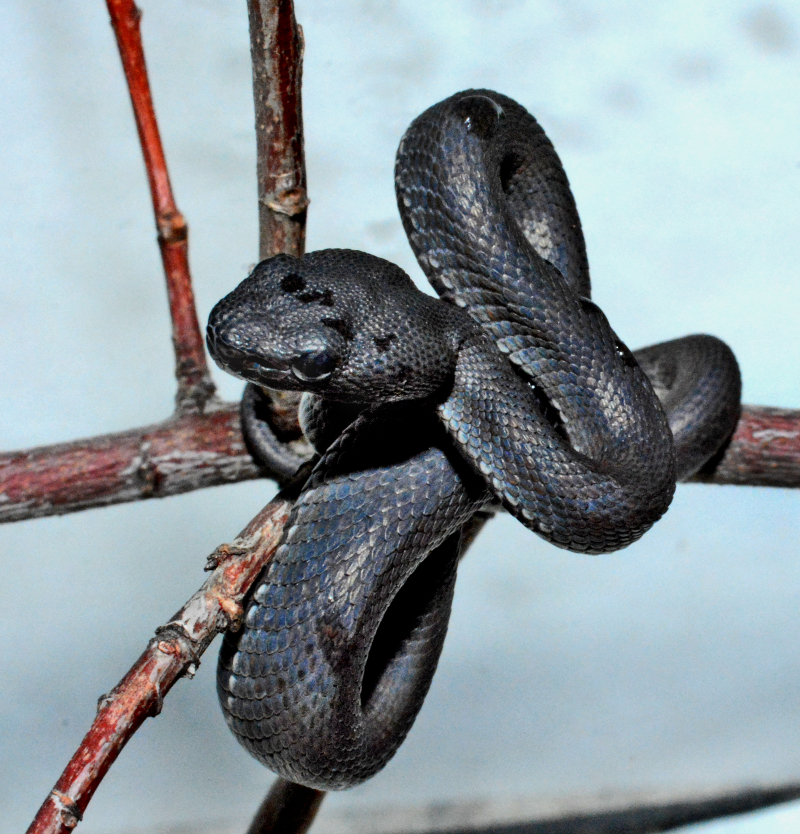 Eight Bushmasters, which are venomous Pit Vipers native to Central and South America, hatched in December (second photo from top). This is the fourth clutch of this species to hatch at the Los Angeles Zoo since the first pair of Bushmasters arrived at there in 2008.  The little hatchlings will eventually grow six to 10 feet long and weigh up to 15 pounds. Bushmasters inhabit forests and though their bites can be fatal, these Snakes are rarely encountered by humans.

Unlike Bushmasters, which hatch from eggs, a Mangrove Viper gave birth to five babies on December 26 (third photo from top). In Snakes that give birth to live offspring, the eggs are held inside the body until they hatch, resulting in live birth. This is the first time Mangrove Vipers have reproduced at the zoo. Mangrove Vipers are venomous Pit Vipers that live in India, Bangladesh, and Southeast Asia.

Staff working behind the scenes at the Avian Conservation Center are hand-rearing a Blue-throated Macaw chick that hatched in December (top photo). Normally, the chick’s parents would care for and feed the chick, but they experienced some minor health issues that required medication and could not feed their baby. Staff took over and offer food via a syringe several times a day.

Found only in a small region of Bolivia, fewer than 250 Blue-throated Macaws live in the wild. In the past, these Macaws were heavily exploited for the pet trade. Though this practice has been greatly reduced, trapping still occurs. Today, the Macaws' biggest threat comes from clearing of suitable nesting and feeding trees. These birds are listed as Critically Endangered by the International Union for Conservation of Nature.

See more photos of the Macaw chick and a Bushmaster hatching from its egg below. 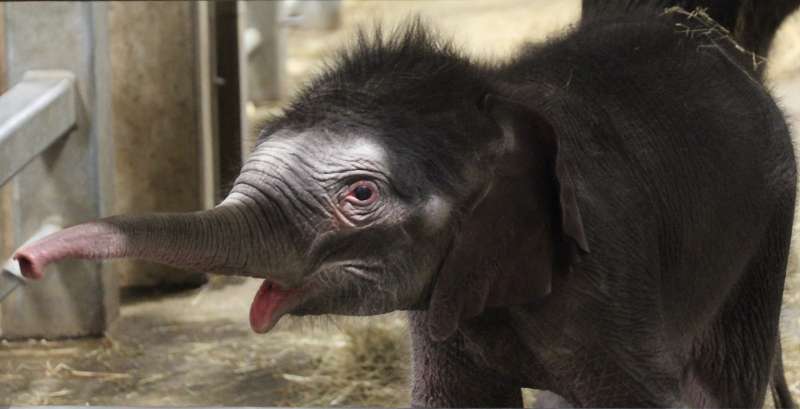 A healthy Asian Elephant was born at the Rosamond Gifford Zoo in Syracuse, New York, on January 15.

The male calf arrived at 5:30am and is the second calf born to female, Mali, and bull elephant, Doc (both age 21). At birth, the baby weighed 268 pounds and measured about 3 feet tall.

The Rosamond Gifford Zoo is among 30 accredited zoos that participate in the Species Survival Plan for Asian Elephants overseen by the Association of Zoos & Aquariums (AZA). 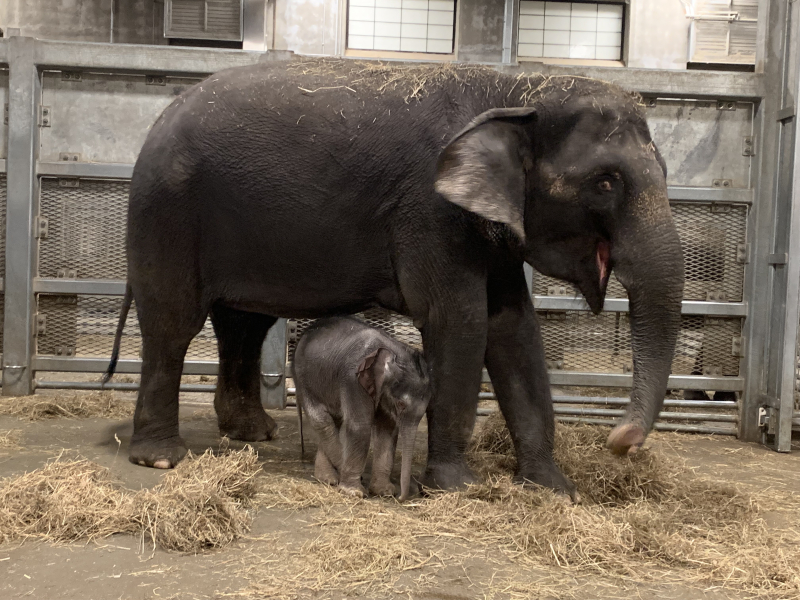 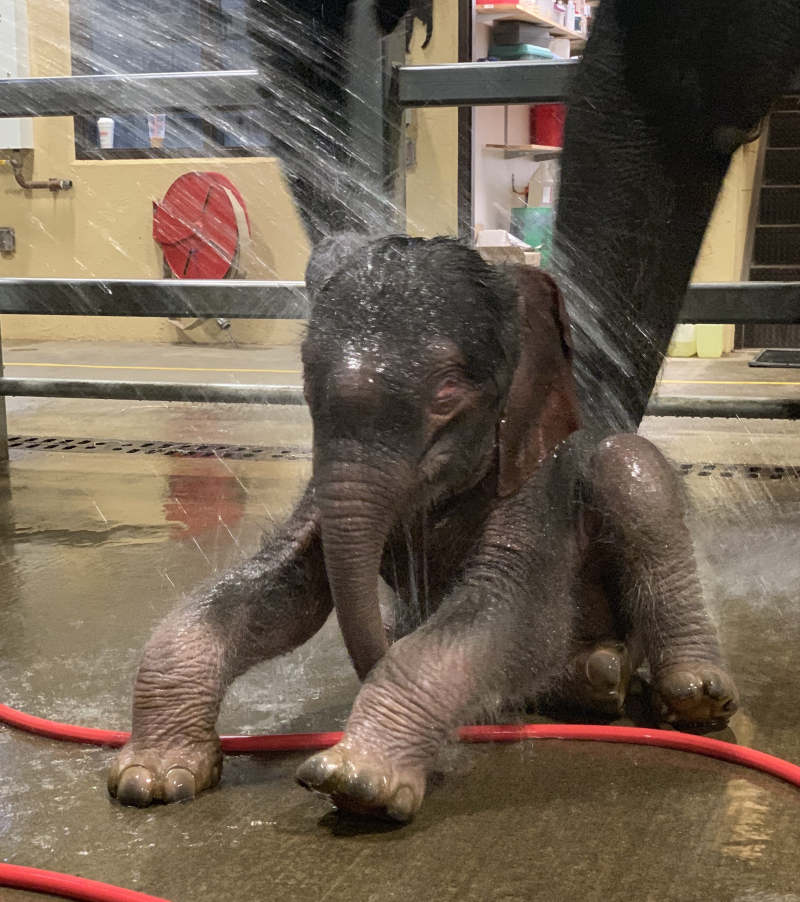 “Asian Elephants are critically endangered in the wild, so it’s a huge accomplishment to be able to breed them in human care,” Onondaga County Executive, Ryan McMahon, said. “I congratulate the zoo and its dedicated animal care staff, as well as the Cornell University College of Veterinary Medicine team that assisted them in preparing for this birth.”

“An elephant’s gestation period ranges from 20 to 24 months. Mali’s pregnancy lasted an estimated 660 days,” said Zoo Director Ted Fox. “After determining the pregnancy was progressing well over a year ago, the elephant care and veterinary team began preparing for a Christmas 2018 due date,” Fox said.

In recent months, the team conducted birthing drills in the elephant husbandry barn, using a life-size inflatable elephant to represent Mali and a giant boat buoy to represent the baby.

Mali started showing signs of active labor at 5:30 a.m. January 15, and the baby was born less than a half hour later. Mother and baby are reportedly both doing fine, and staff will monitor them closely while giving Mali and her newborn time to bond.

The zoo will be posting photo and video updates on its social media platforms so the public can see the baby’s progress leading up to a springtime introduction to the public.

The zoo is in the midst of a construction project to expand its Asian Elephant Preserve from 4.5 acres to 6 acres and improve viewing access to elephants and other species on the Wildlife Trail. The construction is expected to be completed by Memorial Day weekend.

Asian Elephants are the species the Syracuse Zoo is most famous for helping to save as part of its AZA wildlife conservation mission. Of several thousand zoos and aquariums in North America, only 232 have passed the rigorous inspections required for AZA accreditation. Of those, 30 have Asian Elephants and only 11 have breeding programs for this endangered species.

The new addition brings the zoo’s elephant herd to eight animals, including a three-generation family group that includes Mali and Doc’s first calf, Batu, a male who turns 4 in May, and Mali’s mother, Targa, 35. The Preserve also is home to the calves’ three unrelated “aunties” -- matriarch, Siri, who turns 52 this year, as well as Romani, 41, and her daughter Kirina, 23.

Asian Elephants are classified as “Critically Endangered” in their native habitat in Asia and India due to habitat destruction and hunting and poaching by humans. Only about 30,000 are estimated to remain in the wild.

The zoo’s successful participation in the AZA Species Survival Plan, its state-of-the art elephant care facilities – including a 50,000-gallon elephant watering hole with green infrastructure – its experienced elephant care team and its Cornell Veterinary team set it apart as a model for elephant programs around the world.