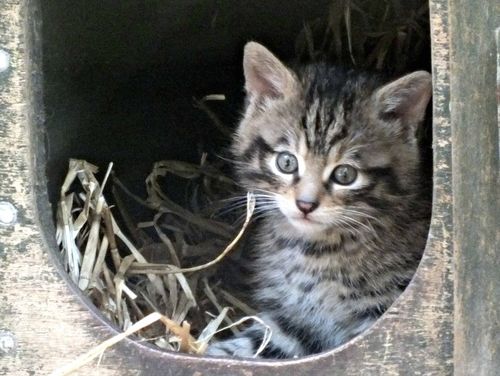 Scottish Wildcats, also known as Highland Tigers, are one of Britain’s rarest animals with as few as 400 thought to be left in the UK, mainly in the Scottish Highlands. These felines at first glance could be mistaken for a feral domestic cat, but have wider heads, distinctive striped coats, and blunt, bushy tails. 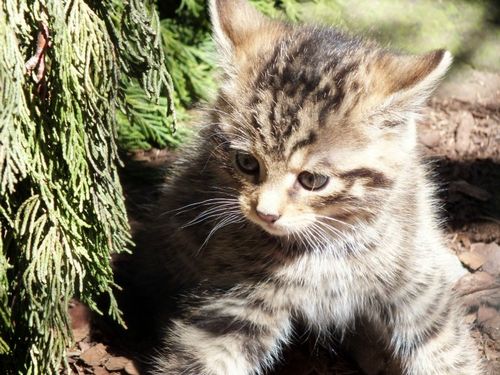 “As there are thought to be less than 400 Scottish Wildcats left in the Highlands, these cats are incredibly rare and endangered so this is a huge milestone for this species and the park. The kittens will play a vital role in the conservation of this historic Scottish species along withincreasing visitor awareness of the problems facing this most iconic Scottish animal.” 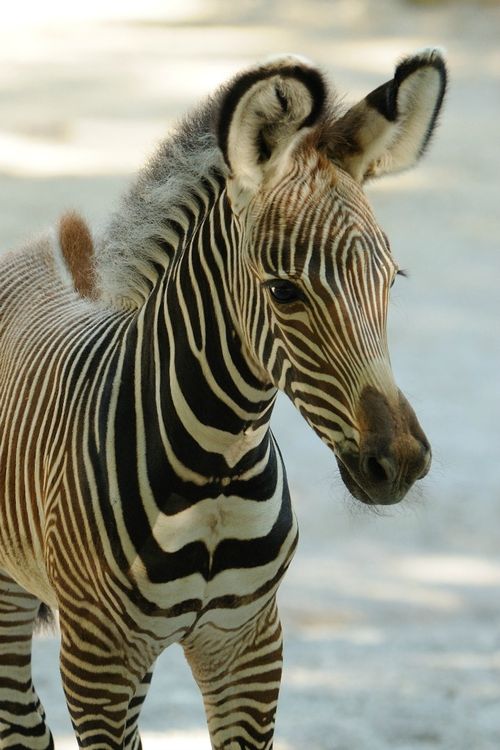 And her name is Savanna! On May 23, the first female Grevy's Zebra baby was born at Ohio's Cincinnati Zoo. Within the first 17 minutes of birth, she was standing and slowly began walking. She successfully nursed within the first hour and has spent the last few weeks bonding with her mom and getting to know the keepers behind the scenes.

The name Savanna was suggested by Twitter follower @Fusion_AmyBaker and selected via vote by the zoo's Facebook fans, She's been going out in the zebra yard daily, and is curious, but is never far from mom, as seen in the video below. 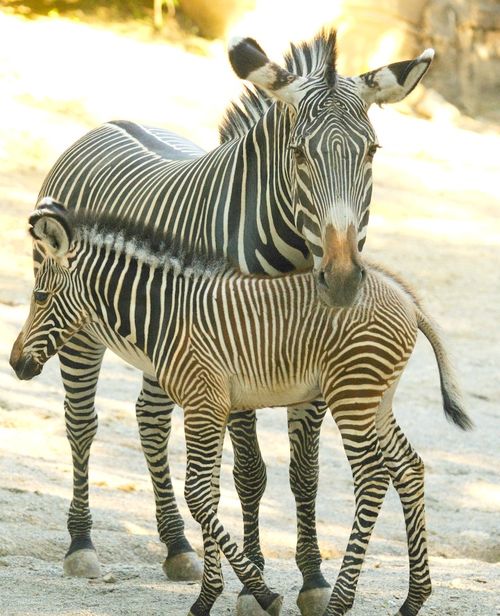 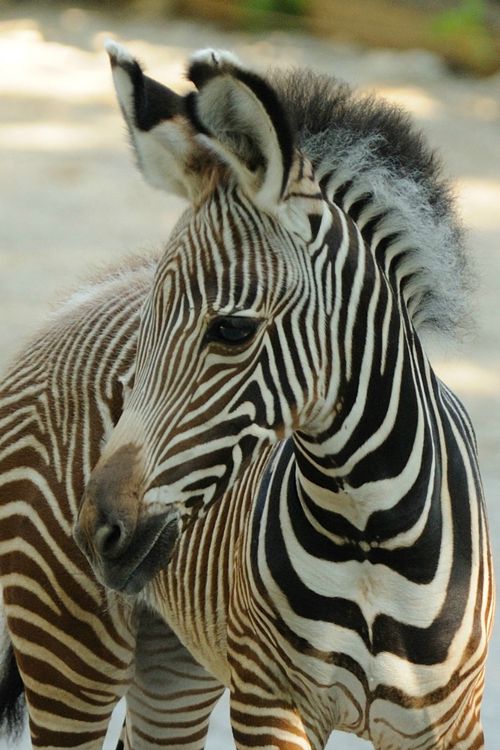 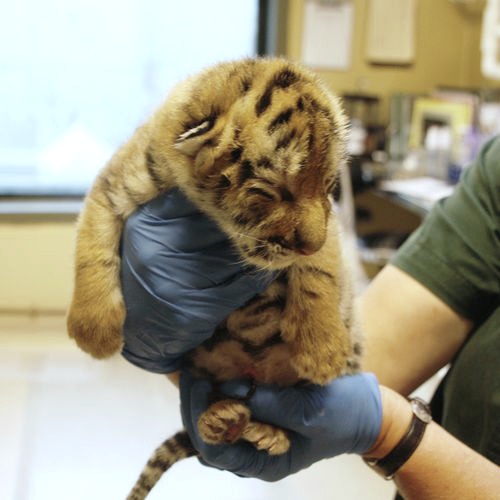 The Minnesota Zoo is hand raising a brand new bundle of joy. On June 17, two endangered Amur Tiger cubs were born to first-time mother Angara and father Molniy after a 105 day gestation period. After observing the mother with her cubs overnight, Zoo officials decided to pull the babies for hand-rearing. Angara wasn't displaying the quality of maternal care required to successfully raise the cubs. During the critical first days under round the clock human care, the smaller of the two cubs passed away. About two thirds of Amur Tiger cubs survive the first 30 days of life. 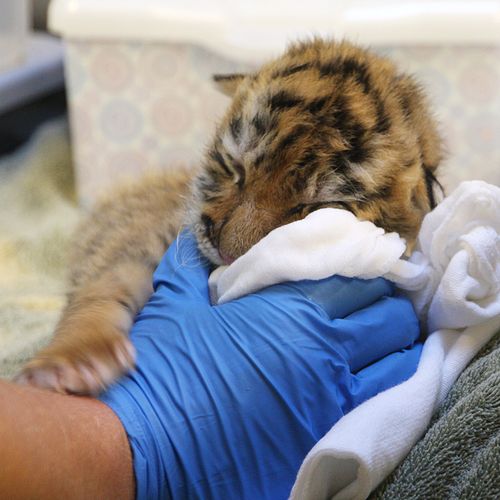 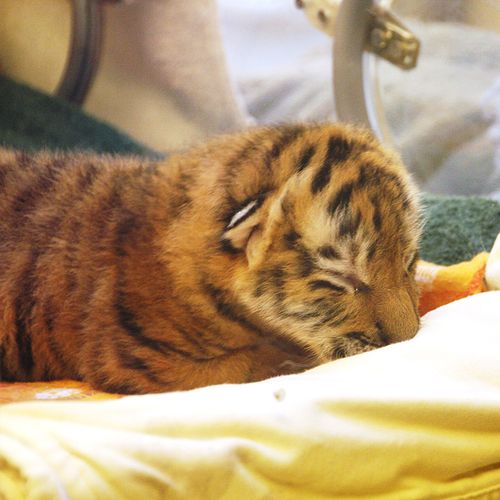 The Amur Tiger’s home range, reputation as a threat to livestock and humans, and value to poachers has led to its population decline. Around 1940, the wild Amur Tiger population in Russia was estimated to be as low as 20 or 30. In 2005, scientists estimated that the population had recovered to 430-500 individuals, but it is thought that wild Amur Tigers have declined since then to about 350. Concerted conservation efforts help protect these remaining endangered Tigers from the persistent threats of poaching and habitat loss. 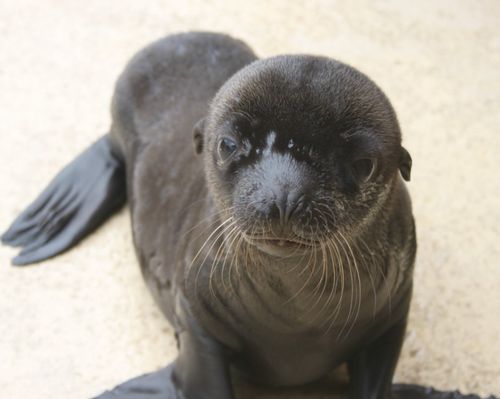 One male and one female California Sea Lions were born at Blackpool Zoo in on June 2 and 9 to first time mothers Anya and Gina respectively. Both the Sea Lion pups are doing well and are now out and about, taking their first tentative dips in the pool under the watchful eye of their mothers and the rest of the harem.

Jude Rothwell, Marketing and PR Co-ordinator at Blackpool Zoo said, “The names of our two Sea Lions are Spanish in origin and Rubi, which translates into Ruby, has been named as such because she was the 40th baby to be born in the year we celebrate our 40th anniversary.”

Sea Lions are recognized as endangered, with many species on the brink of extinction. Several reasons have led to their decline in numbers around in the world. It has become illegal to hunt, harm or kill a Sea Lion but that doesn't necessarily prevent that from taking place. Conservation groups are working hard to educate the public about the need to protect them. And there are now laws in place to help protect their natural environments. 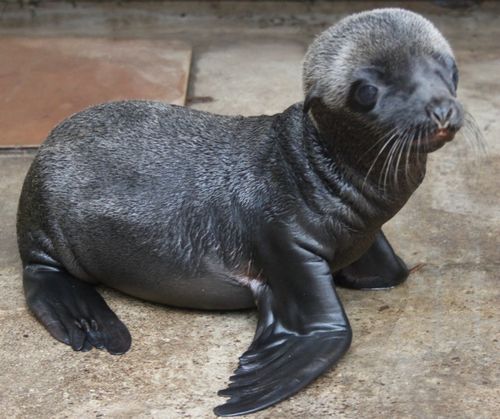 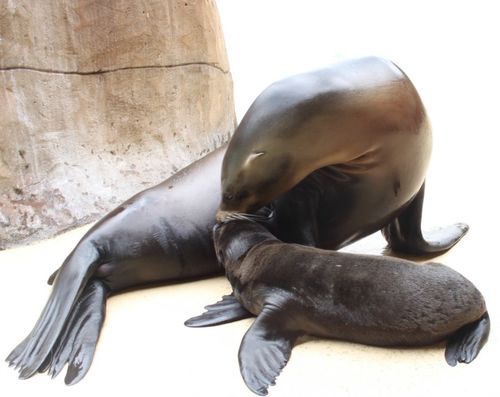 Finest Photos Of A Baby Tapir ZooBorns Ever Saw! 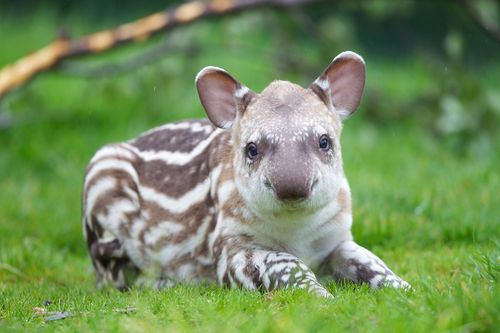 Dublin Zoo has a new arrival! Born early on Tuesday, June 5, this tiny male Tapir calf is off to a terrific start. This is mother Rio and father Marmaduke's first calf together.

Team leader Eddie O’Brien, said, “We are delighted with the birth of the tapir calf. Mum and calf are doing very well and we are really happy with how well Rio is doing as a first time mum. The calf was up and about quickly after he was born, he is really inquisitive!” 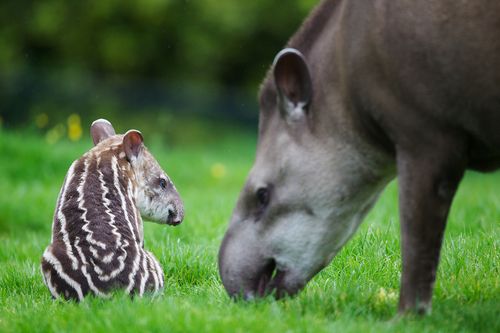 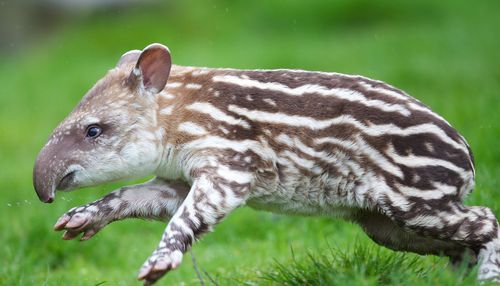 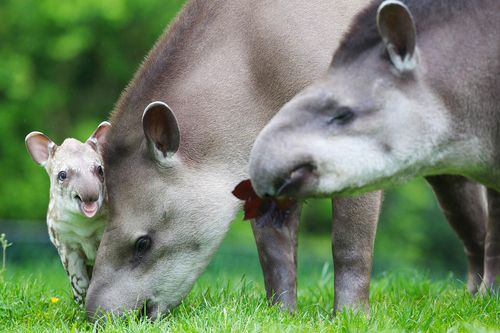 Tapir calves are born with a number of white spots and stripes which act as camouflage in the wild. The spots and stripes mimic the dappled sunlight on the forest floor but these markings will disappear by adulthood. Although this is Rio’s first calf, Marmaduke has successfully fathered 17 tapir calves to date.

Learn more about Tapirs after the jump and see many more outstanding images of Ireland's newest little watermelon! 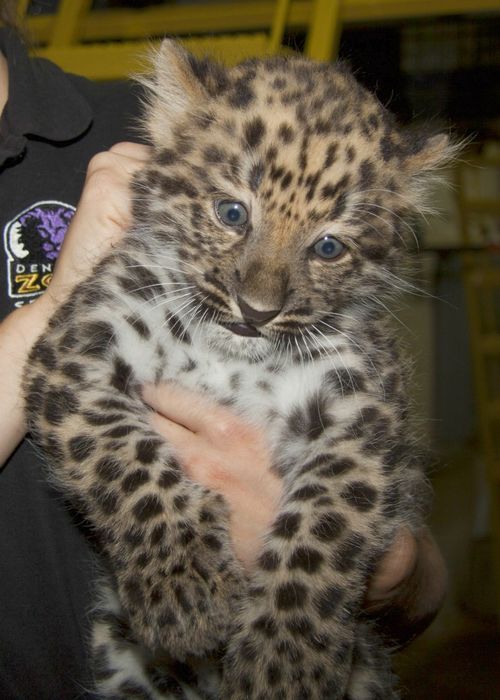 The Denver Zoo is celebrating the birth of a critically endangered Amur (ah-Moor) Leopard cub born on April 25. The young male, named Makar (Mah-car), is the first birth of his species at Denver Zoo since 1996. Until now, Makar has been behind-the-scenes with his mother. He just received a clean bill of health from zoo veterinarians and guests can see him now inside the zoo's Feline Building.

Mom, Dazma (Dazz-mah), and dad, Hari-Kari (Harry Care-ee) were paired under recommendation of the Association of Zoos and Aquariums (AZA) Species Survival Plan (SSP) which ensures healthy populations and genetic diversity among zoo animals. Fortunately, the couple has proved to be an excellent match.

Amur Leopards take their name from the Amur region located along the Chinese-Russian border. Once found from South Korea to north of the China-Russian border, Amur Leopards are now nearly extinct in the wild and found along a small area in Eastern Russia. They are considered critically endangered with fewer than 40 animals remaining in the wild. Poaching for fur, loss of habitat and trophy hunting are the primary reasons for their decline. 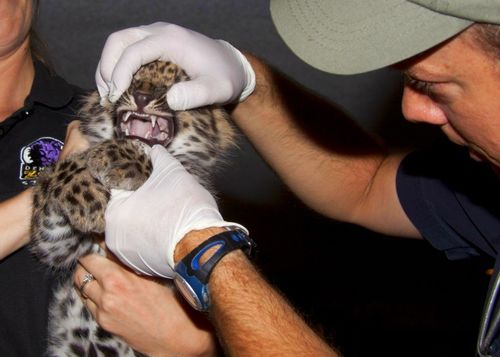 Read more about Amur Leopards after the jump!

It's Winter In Australia, But Spring Is In The Air 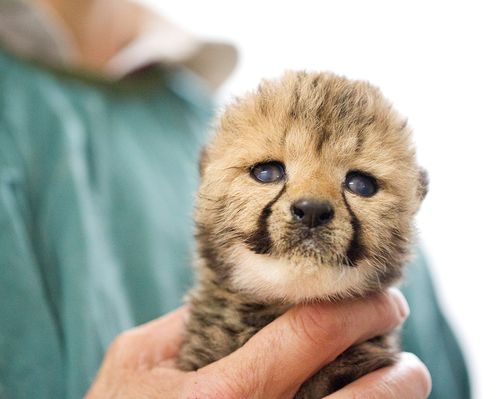 It may be winter in Australia, but Monarto Zoo got a taste of Spring on June 2 when it welcomed its first Cheetah cub in several years. Keepers were surprised by the birth because recent pregnancy tests on mother Nakula came up negative. Anna Bennet, Team Leader of Carnivores, said the cub stayed with Mom until keepers decided it was best to hand raise her.

“Normally it’s very rare for Cheetah to raise a single cub as mum tends to not produce enough milk to feed just one,” Anna said.

“It’s hard to say why this happens, however the recommendations we’ve had from other institutions indicate that a single cub has the best chance of survival if it is hand-raised.

“Most importantly she’s strong, healthy and very cute! Our only problem now is deciding who gets to take care of the little fluff ball as she needs feeding every few hours.” 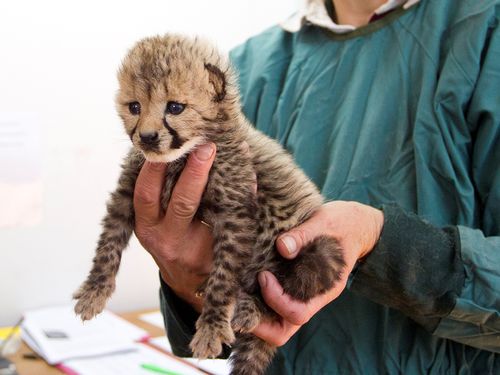 Zoos South Australia Head of Life Sciences, Peter Clark, said the little cub will act as an ambassador for its species educating Australians on the plight of Cheetahs in the wild.

“In the last 35 years we’ve lost almost half of the wild Cheetah population. Currently there are approximately 7,500 Cheetah left in the wild whereas in the mid 1970s the population was estimated to be around 15,000,” Peter said.

“The decline is primarily due to habitat loss and fragmentation, and the killing and capture of Cheetahs to protect livestock against predation.”

You Must Have Been a Beautiful Baby! White Rhino Born at Tel Aviv Zoo 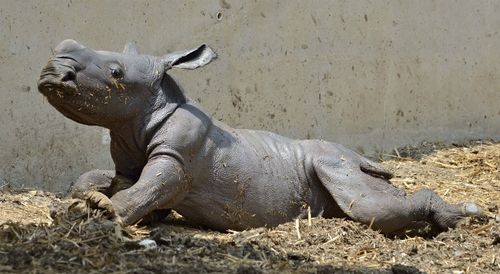 After a year and a half of pregnancy, Tanda, the Tel Aviv Zoological Center's White Rhino gave birth to a beautiful, healthy male calf on June 15. Keepers were waiting for the birth to happen, as they had observed Tanda pushing a way her 4.5 year old son Tibor. When Tanda secluded herself from the rest of the rhinos on Friday morning they knew the moment they were waiting for was about to arrive.

Tanda is 20 years old (born in South Africa), and this is her third birth, and second successful one. She proved herself to be a great mom with Tibor, and she is being so again with her new calf. The calf has been named Terkel in honor of curator Dr. Amelia Terkel, who will be retiring after more than 30 years on the job.

The Tel Aviv Zoological Center White Rhinos are part of the European program for endangered species, and report they are honored to contribute to the conservation of this magnificent animal. 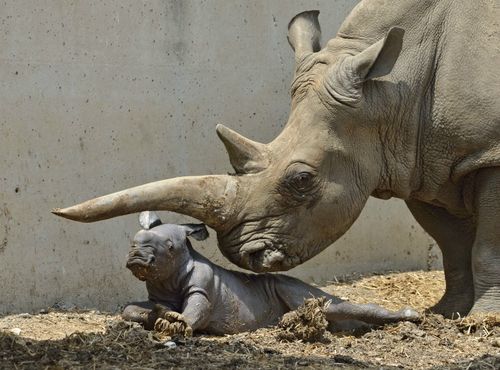 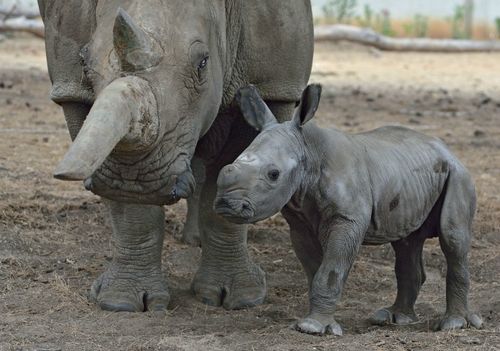 Warning: Full birth shown in the video below. Incredible footage but perhaps not for the squeamish! 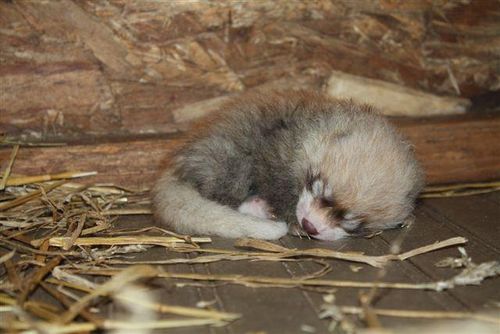 What is that pinkish furball? It's a baby Red Panda, born on June 7 at Wisconson's NEW Zoo. The Red Panda cub is creating excitement among visitors while on exhibit with its parents, Tae Bo and Leafa, even though napping is its biggest activity at the moment. It will be awhile before the baby is up and wandering around the exhibit.

This is the second cub for the couple and all are doing well. Red Pandas mature sexually at 18-20 months and the gestation period for ranges from 110 to 145 days. Feeding almost exclusively on bamboo, Red Pandas are found in mountainous terrain from Nepal through to north eastern India and Bhutan and into China, Laos and northern Myanmar and share part of their range with giant pandas. Their numbers continue to decline in the wild. 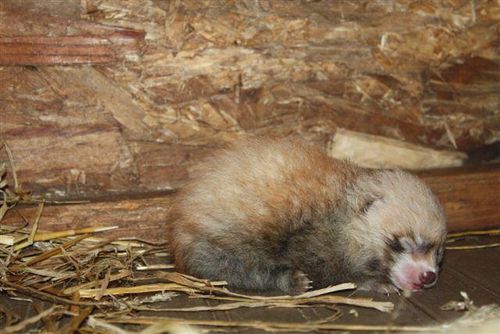 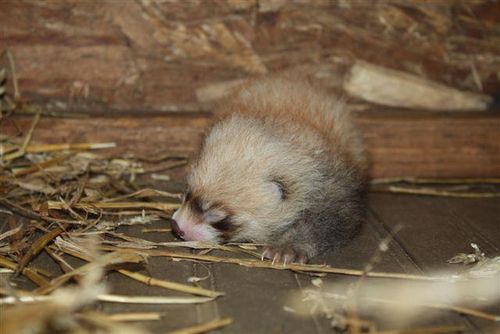 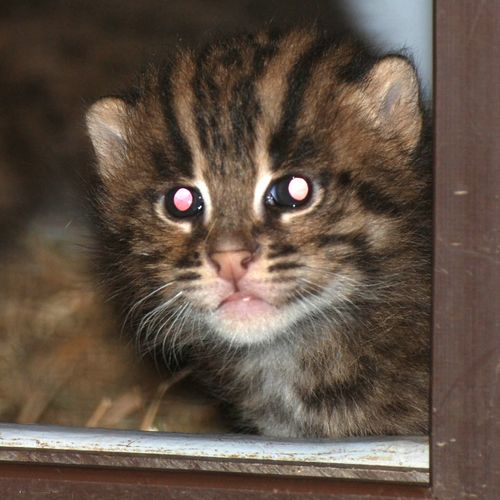 The Smithsonian’s National Zoo is closer to cracking the code for breeding one of Asia’s most elusive species with the birth of two Fishing Cats (Prionailurus viverrinus). Seven-year-old Electra delivered the kittens between 9 a.m. and 4 p.m. May 18 in an off-exhibit den. Their birth marks an important milestone: this is the first time fishing cats have successfully bred and produced young at the National Zoo.

Keepers are monitoring the mother and her offspring through a closed-circuit camera, allowing the family time to bond. Although the kittens will not make their public debut until later this summer, Zoo visitors can see their father, two-year-old Lek, on Asia Trail.

“Many months of behavior watch, introductions and research allowed us to get to this point,” said Zoo Director Dennis Kelly. “It’s very rewarding that our efforts have paid off. The future of their wild cousins hangs in the balance, so it’s imperative that we do all we can to ensure their survival.” 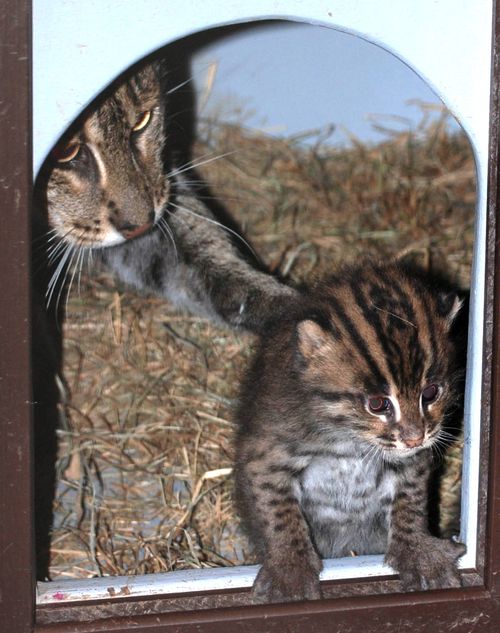 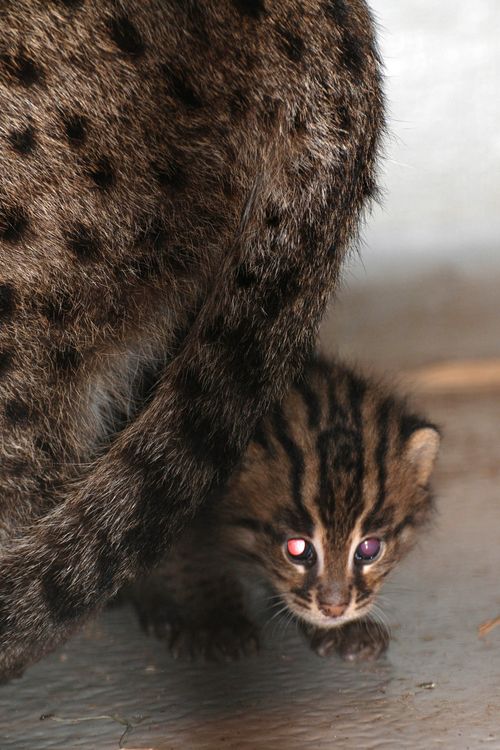 Read the story of this exceptional breeding success and see tons of pictures below the fold!