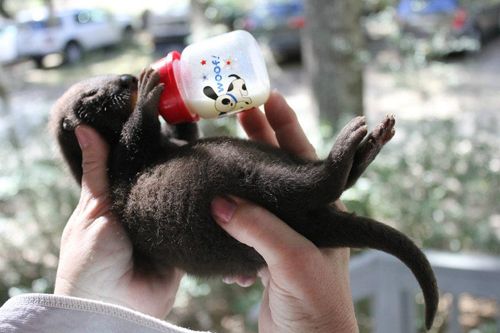 Virginia Aquarium in Virginia Beach, VA is inviting you to help name its newly adopted Otter pup. On February 5th, the newborn Otter was found alone near St. George, S.C., apparently abandoned by his mother. The tiny male pup was days old when rescued. During the rescue and in subsequent stabilization period, he became dependent upon human care, so he was deemed unable to be released into the wild. He is now under the watchful care of Virginia Aquarists and thriving. You can visit the aquarium's Otter blogto check his progress and learn how you can participate in the naming of this new arrival. 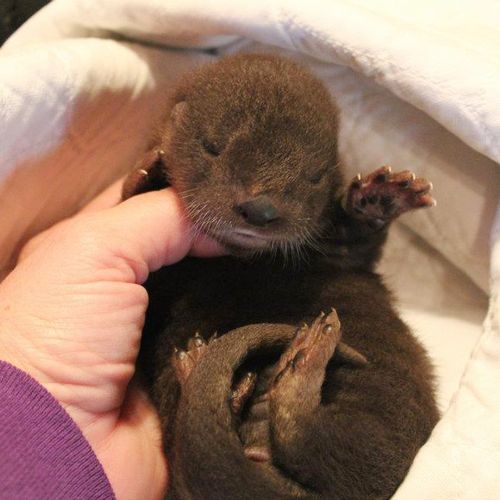 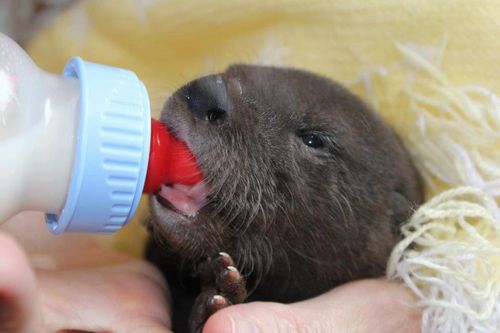 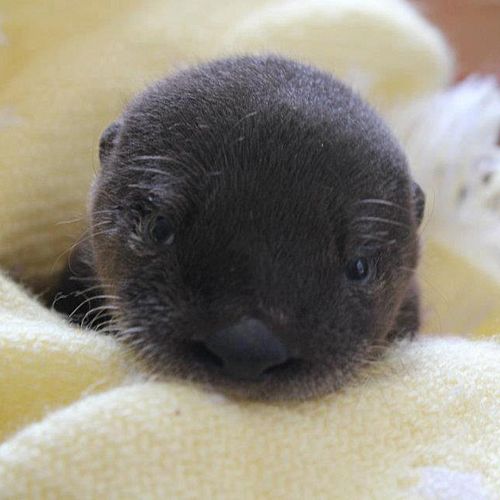 The Otter is currently off exhibit getting adjusted to his “family” of caretakers and a new routine. He is alert, curious, playful, and sleeping through the night. He likes cuddling with his blanket, chewing on his toys, and getting wet in his small pool. He is getting adjusted to “nursery school” as his caretakers have already begun their training sessions with him. Once he consistently responds to the command of returning to the caretakers, he will be able to explore the “big boy” otter exhibit, first alone, and then later with his new friends, resident otters Tippy and Homer.

A Memorable Memorial Day For A New Mother Dolphin On Memorial Day Monday, at around 10:30pm, Chicago's Shedd Aquarium welcomed a new-born Pacific White-sided Dolphin calf to its Oceanarium. Shortly after the birth, the calf swam to the surface, took its first breath, and began to swim and bond with its mother. The gender of the calf has yet to be determined. Animal care staff estimate the calf to be approximately 3-feet in length and weigh approximately 25-pounds. While mother and calf appear to be doing well, this is a critical time for both, and aquarists will monitor them around the clock for several months.

In 1993, the United Nations banned certain types of fishing nets that had previously caused the unnecessary deaths of thousands of these intelligent sea creatures. Pacific White-sided Dolphins are still killed needlessly by Japanese hunting drives. 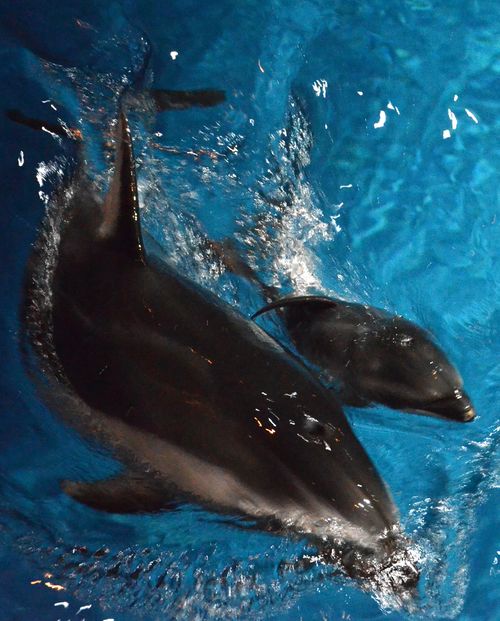 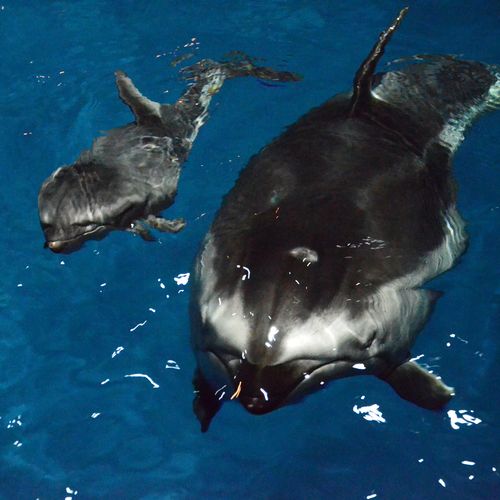 Piquest and her calf swimming

More photos and information about the birth beneath the fold... 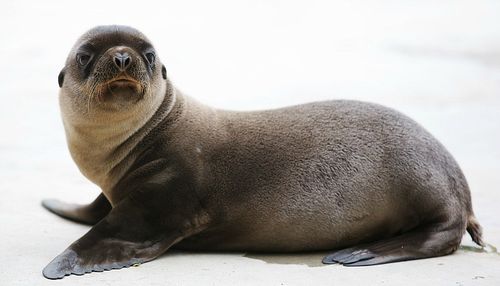 It's a boy! Dublin Zoo is celebrating a new male Californian Sea Lion pup born in the early morning on May 22. The pup weighs approximately 6.5 pounds (3kgs) and joins his mom Seanna, his 3-year-old sister Flo, and Cassie, another female sea lion in their habitat.

Team leader Eddie O’Brien, said, “We are absolutely thrilled with the birth of this pup. I’m delighted to say that Mum and pup are doing very well. Sea lion’s milk is so rich in nutrients and fat that our new arrival will grow very quickly.”

Californian sea lions are born on land and without the ability to swim so for the first day of his life, the pup’s mother stayed with him on land. On day two, Mum led the pup to water and taught him how to swim. Californian sea lions are fast learners and the pup has become a comfortable swimmer after just a few days. However his mother still keeps a close eye on him when he is in the water. 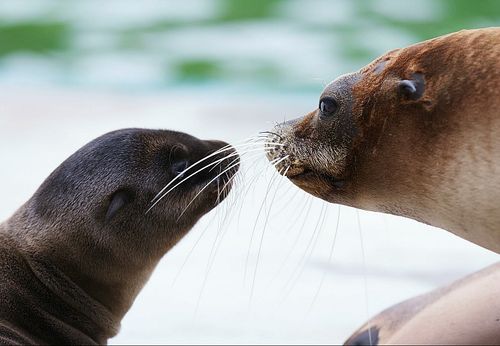 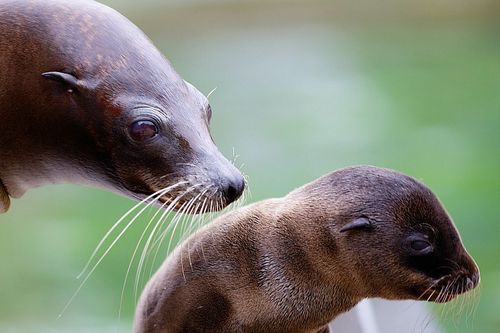 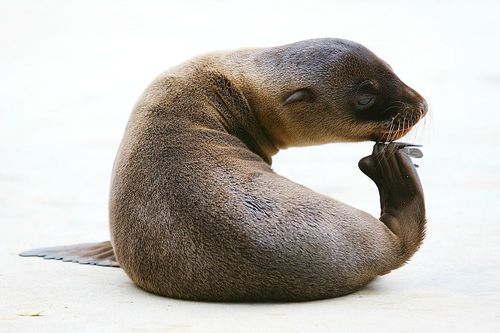 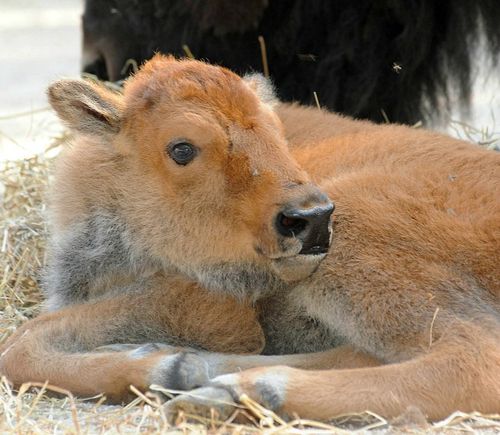 It is not exactly the sound of a stampede but more like the pitter-patter of little hooves that guests can hear at Chicago's Brookfield Zoo’s Great Bear Wilderness exhibit with the addition of a Bison calf born on May 16. The female calf marks the first birth of this species at Brookfield Zoo since the early 1970s.

The birth is a welcome addition for mom Leotie, age 3, and father Ron, age 12, considering the species was slaughtered to near extinction in the late 1800s. Bison were hunted for their meat and bones but primarily for their hides, which were made into clothing, machine belts, and rugs. Historically, tens of millions of bison traveled hundreds of miles over the same route through the Great Plains, shaping the land and enriching the soil. Remnants of their deeply worn paths are still visible. But by the end of the 19th century, bison populations were eliminated over 98 percent of their range in the lower 48 states, resulting in fewer than 1,000 individuals remaining.

Calves are usually born in late spring and weigh 40 to 70 pounds at birth. Their coat is reddish at first, and darkens over a period of about 15 weeks. They are able to stand within half an hour of being born and can run after a few hours. Calves begin grazing when they are just shy of a week old but continue to nurse for several months. 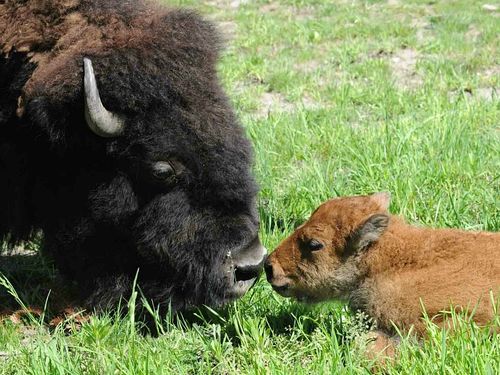 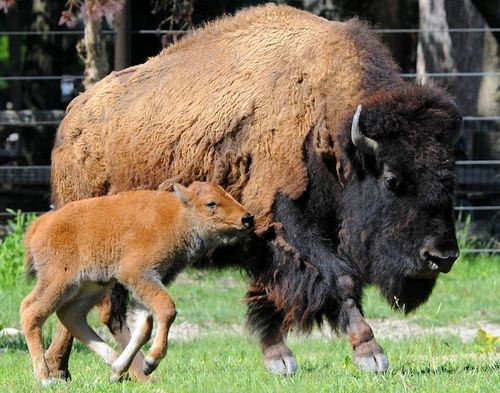 Read about this bison's conservation success story after the jump: Belfast Zoo is celebrating the arrival of two of the world’s largest rodents, in the form of twin capybara babies. They've been named Gus and Jacques. Parents Charlie (with the twins in the bottom picture), and Lola, posing just below with Gus, welcomed their offspring who came into the world on April 3.

Capybaras originate from South America. The scientific name for capybara (Hydrochoerus) means ‘water hog’ and although they are technically from the rodent family, this name relates to the fact that capybaras are semi-aquatic animals and love the water. In fact, capybaras have webbed feet and can stay underwater for up to five minutes at a time, to hide from predators.

Zoo Manager, Mark Challis, said, “Our capybaras live in a mixed South American exhibit in the zoo.  Already in 2012, we have welcomed Kara and Pancho, the giant anteaters, to this enclosure and now we are celebrating the arrival of our capybara twins! It’s definitely an exciting time and I am sure that zoo visitors will enjoy visiting Gus and Jacques.” 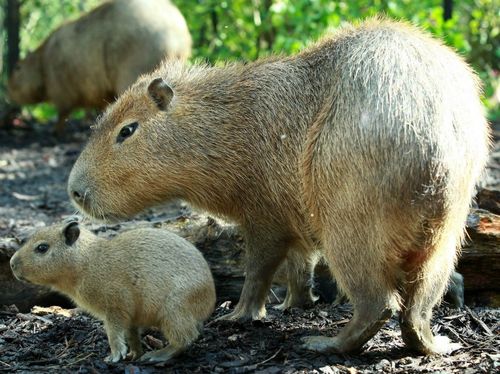 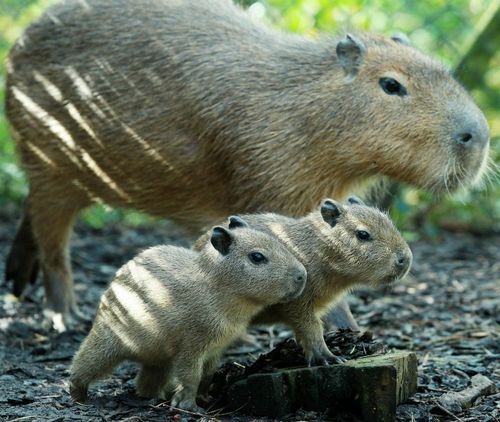 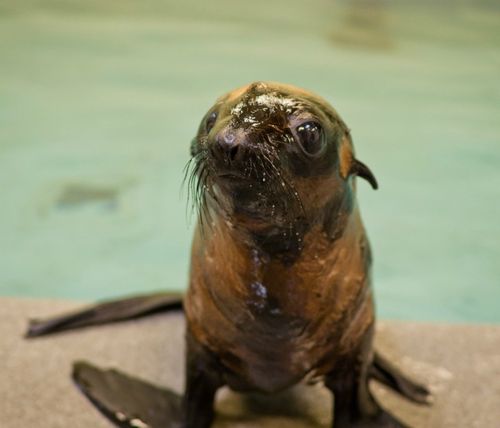 A few months ago, this tiny Northern Fur Seal pup was found alone in a tangle of seaweed on a beach in California, severely underweight and blind in one eye. His coat was in poor shape, mottled with orange under fur showing where his dark brown guard hairs should be (you can see this in the photos). This means it would be hard for him to stay warm in chilly ocean waters. Luckily the youngster was rescued by a marine mammal program in Santa Barbara. After careful examination, it was determined he could not be returned to the wild.

The New England Aquarium, which already had five other Fur Seals as companions, stepped up to welcome this seal in need. The pup arrived at the Aquarium via FedEx on May 19, weighing about 20 pounds. For now he'll remain behind the scenes at the New Balance Marine Mammal Center so trainers can make sure he’s comfortable and eating well. The addition of the young pup makes the New England Aquarium’s Northern Fur Seal colony the largest of any zoo or aquarium in North America. 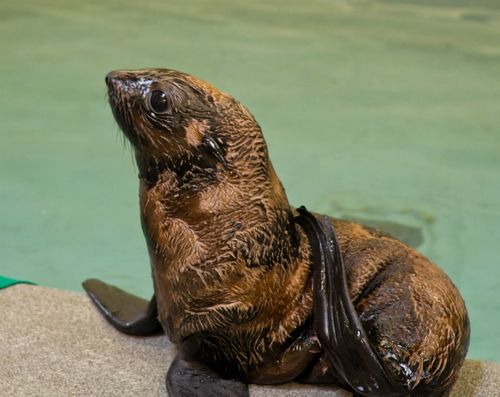 Like a good Fur Seal, he spends a lot time grooming his thick fur coat. Fur Seals are the second furriest animals on the planet with 300,000 hairs per square inch!

This little guy needs a name! Have a suggestion? Submit your entries for the naming contest before 5:00PM Eastern on Tuesday (5/29/12)

More great photos after the jump 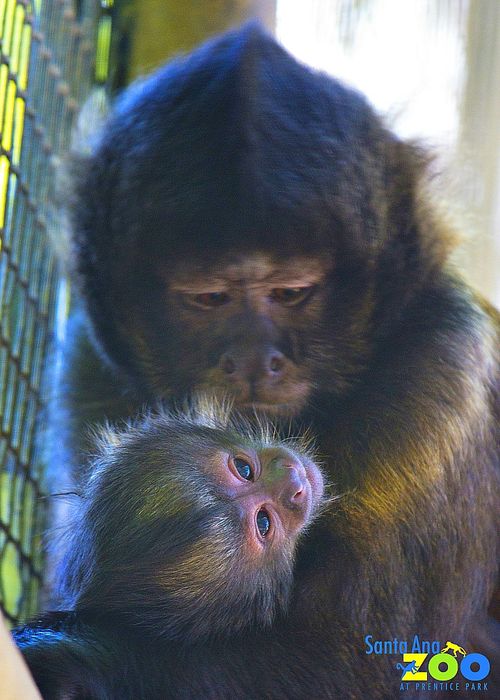 The Santa Ana Zoo in Prentice Park is pleased to announce the birth of a rare Crested Capuchin Monkey (Cebus robustus) on May 7. The new infant is the Zoo's third birth of this species, which is considered endangered by the International Union for Conservation of Nature This birth is an important contribution to the conservation program established in North America.

Crested capuchin monkeys are a medium sized primate native to rapidly disappearing forests along the Atlantic coast of Brazil. In the wild, capuchins feed on a wide variety of fruits, insects, seeds, leaves, and even small mammals. Zookeeper Dina Orbison says “it is immensely gratifying to participate in this international effort and to educate our visitors about such unique and inquisitive animals”. 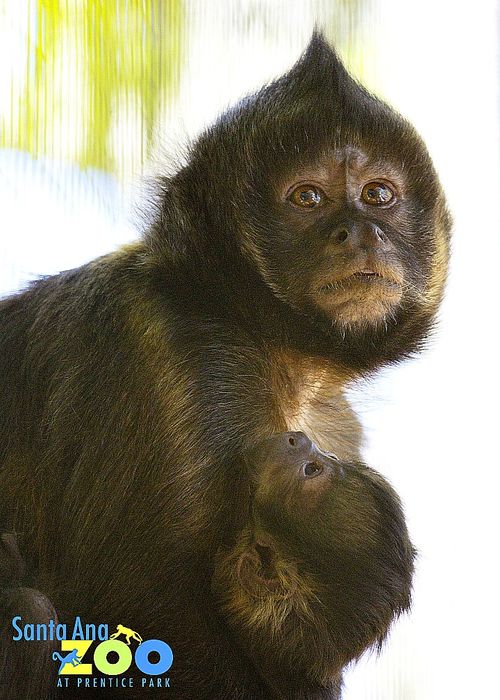 Ever Wanna Bottle Feed a Cheetah? 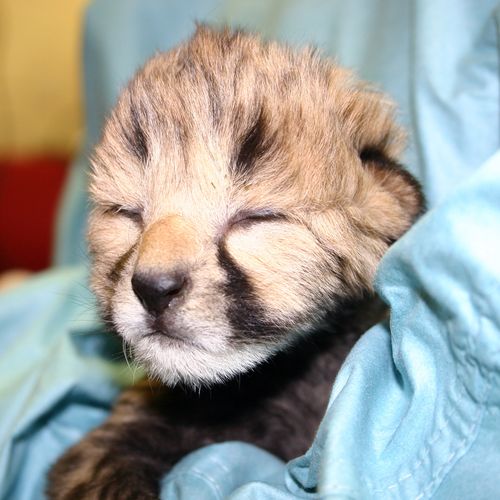 Three weeks after their unconventional and rocky entrance into the world, two 3-week-old Cheetahs were transported May 18 to the Smithsonian’s National Zoo in good health, thanks to the hard work and swift actions of animal care staff at the Smithsonian Conservation Biology Institute in Front Royal, Virginia. The cubs are being hand-raised at the Zoo and will require around-the-clock care until they are ready to make their public debut late this summer. 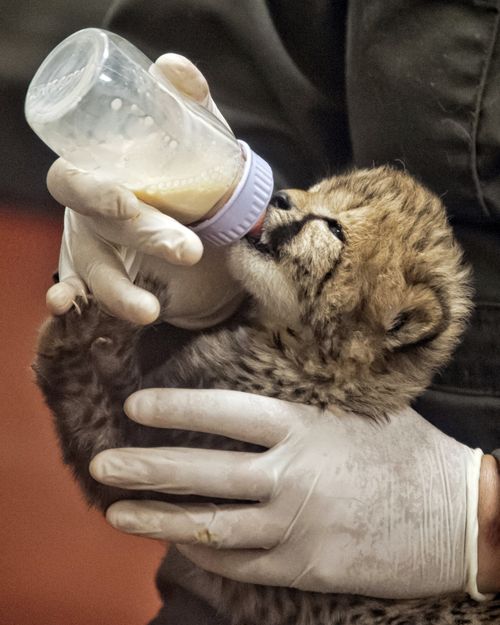 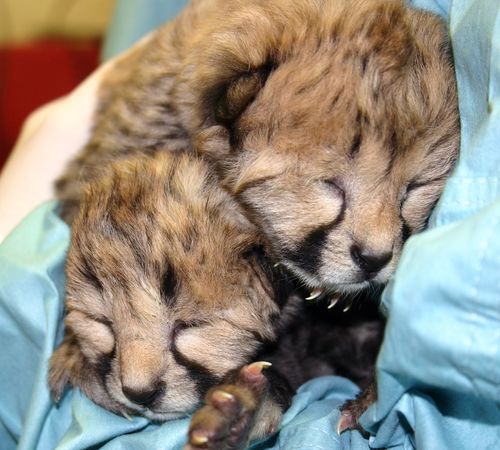 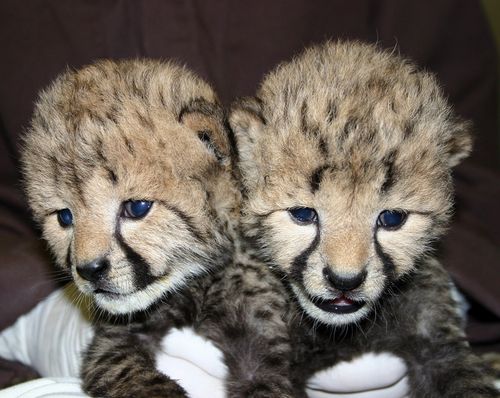 Five-year-old Cheetah and first-time mom Ally gave birth to the first cub, a male, April 23. However, instead of nursing and cleaning the cub, she abandoned him, which is relatively common for first-time mothers under human care. Cheetah keepers moved the cub to the veterinary hospital to be treated for severe hypothermia. When Ally suddenly stopped having contractions hours later, SCBI head vet Dr. Copper Aitken-Palmer anesthetized her to see if she had additional cubs. Aitken-Palmer heard additional heartbeats and performed a radiograph to determine that three cubs remained. She performed a cesarean section, a procedure rarely used on Cheetahs and one that cubs do not often survive. A team of veterinarians, keepers and scientists worked for three hours to resuscitate the three cubs, performing CPR, administrating medications and rubbing the cubs to dry and warm them. One of the three cubs, a female, did survive.

Read more about the cubs and see all their first photos below the fold...

Can you see it? Koala joey plays peek-a-boo, one limb at a time 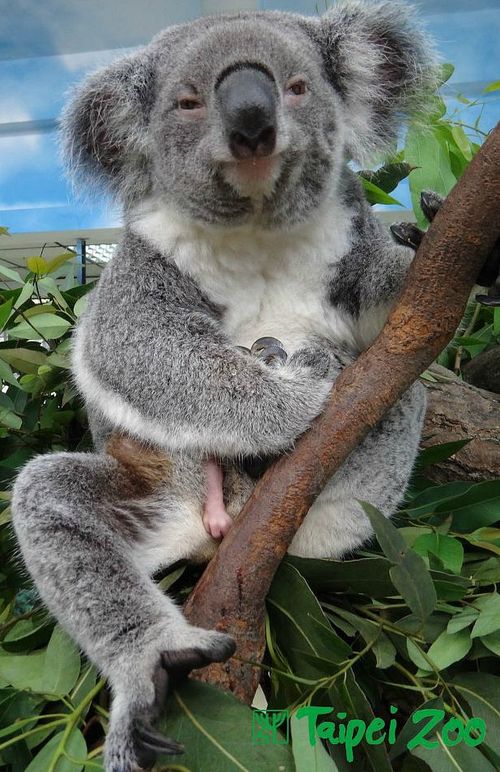 The Taipei Zoo's newest little Koala joey has decided it's time to take a peek out at the big world. Born to mom Empress and father Flynn, this baby koala has spent the last few months tucked quietly away inside mom's pouch. Judging by the lack of fur on this little guy, he or she has a month or more of pouch-time to go before fully venturing out, but limbs and snout will ocassionally make an appearance.

Almost hunted to extinction for their fur, this iconic species has made a comeback but faces new threats, including habitat destruction, cars and dogs, and disease. Koala's are not bears but marsupials. 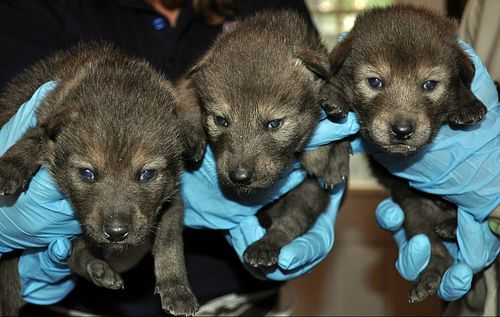 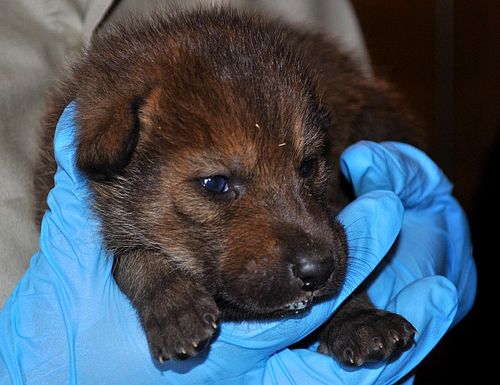