The Rosamond Gifford Zoo has an exceptionally sleepy and exceptionally adorable new addition - a 6-week-old baby Hoffman's Two-toed Sloth. Born underweight, Ruth as she has been named has bounced back thanks to keepers supplanting her nursing with nutritional formula. Now Ruth is happy, healthy and as active as Two-toed Sloth ought to be, which is to say, pretty laid back. Sloths are not on the endangered species list. However, their habitat is quickly being destroyed, leaving them homeless and vulnerable to a decrease in their population size. They are part of a Species Survival Plan (SSP) - a collaborative effort between the Association of Zoos and Aquariums and zoos around the world to help ensure their survival. 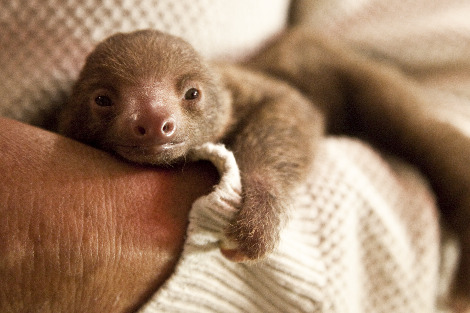 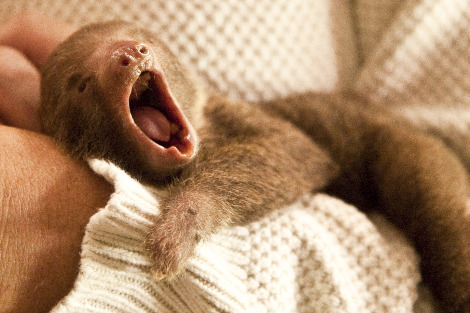 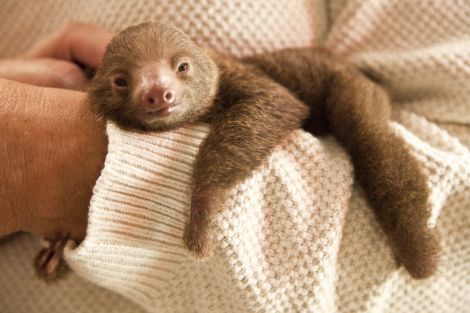 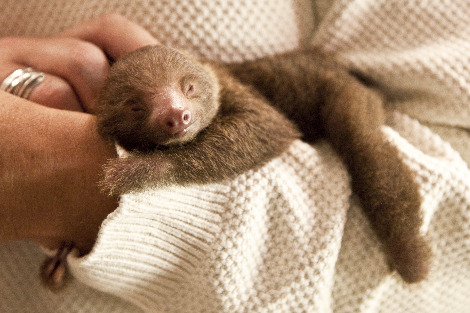 Today the Madrid & Zoo Aquarium unveiled the world's newest and cutest Giant Panda cubs. Born September 7, the cubs originally emerged pink and hairless, weighing just 150 grams (5 ounces). However, after five weeks of incubation, they are now in ridiculously adorable true panda cub form! Mother panda Hua Zui Ba has proven to be attentive, licking her babies to clean them and allowing each cub to take turns nursing. Father Bing Xing has remained aloof, typical father panda behavior. The cubs will live in Madrird for the next three to four years before returning to the panda-homeland of China. 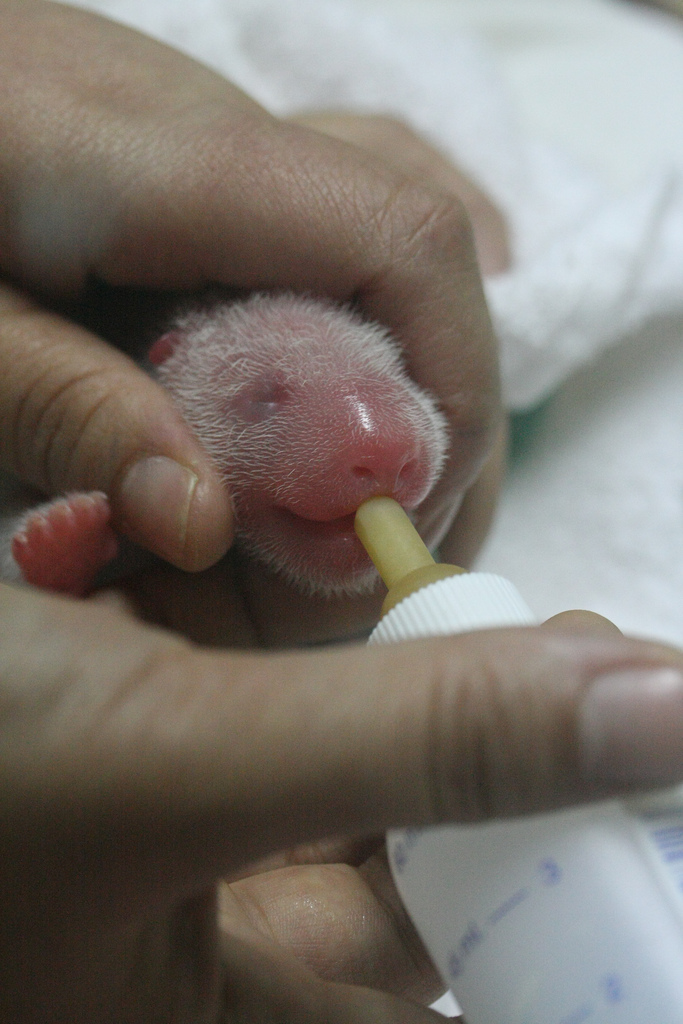 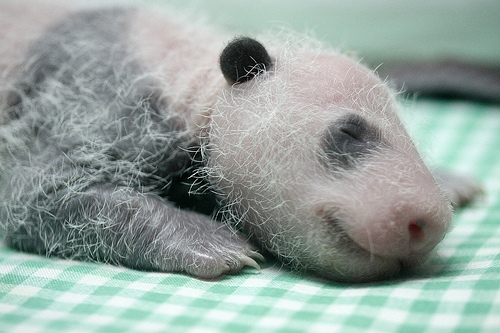 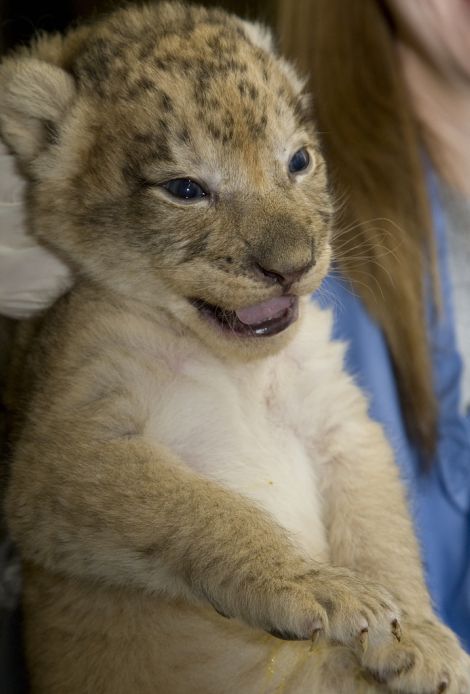 “We’re happy to see that the cubs are growing and that each appears to be in good health,” said Dr. Jessica Siegal-Willott, supervisory veterinarian at the Zoo. “Naba has done a great job nursing them and we’ll continue to monitor their development.” 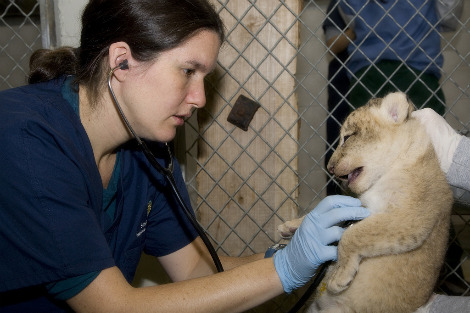 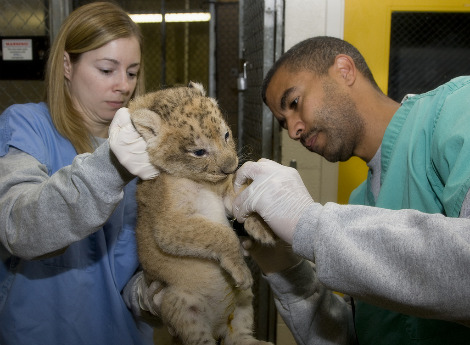 The veterinary team checked the cubs’ mouths and eyes, listened to their hearts and lungs and felt their bellies, but the animals are still too young to receive vaccines. 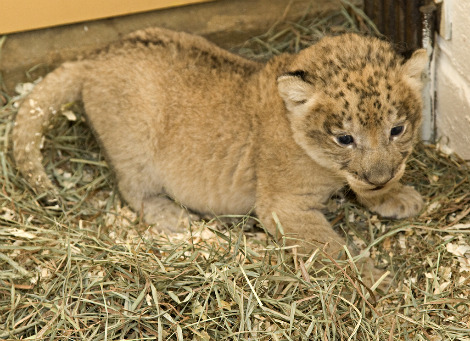 The cubs’ next exam will be in about a month. On Sept. 17, the Zoo’s four other lion cubs, born to Naba’s sister, Shera, Aug. 31, underwent their first health exam and all four also appeared to be healthy.

At New Zealand's Wellington Zoo, a young Labrador mix is teaching a Dingo puppy the art of being a canine. Percy, a yellow lab who was abandoned and picked up by the SPCA, is playing companion to young Wolfrik, Wellington's sole Dingo pup. According to zoo officials, Percy is a bit older and wiser, and hasn't been shy about putting young Wolfrik in his place. The zoo hopes that they will be able to find a mate for Wolfrik, at which point Percy will be adopted by one of the zoo's staff. The Dingo is a primitive canine species found only on the Australian continent. It is often mistakenly thought that Dingoes do not bark. 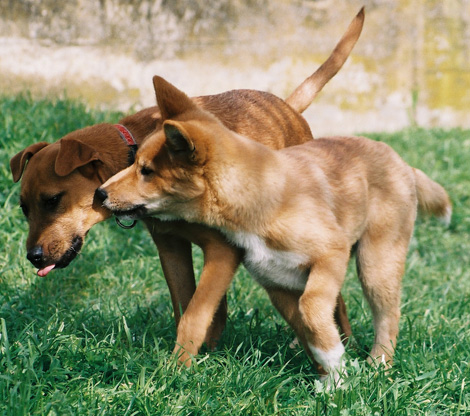 Wolfrik lunges for a nibble on Percy's ear 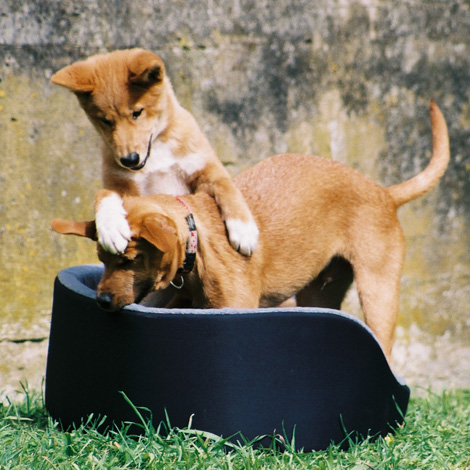 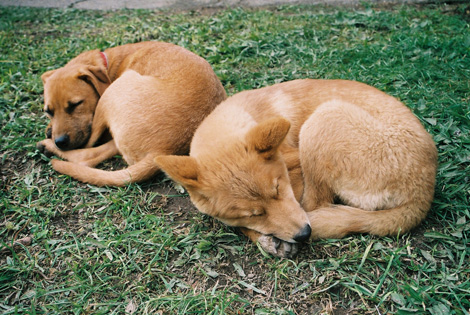 It's exhausting being this rambunctious. 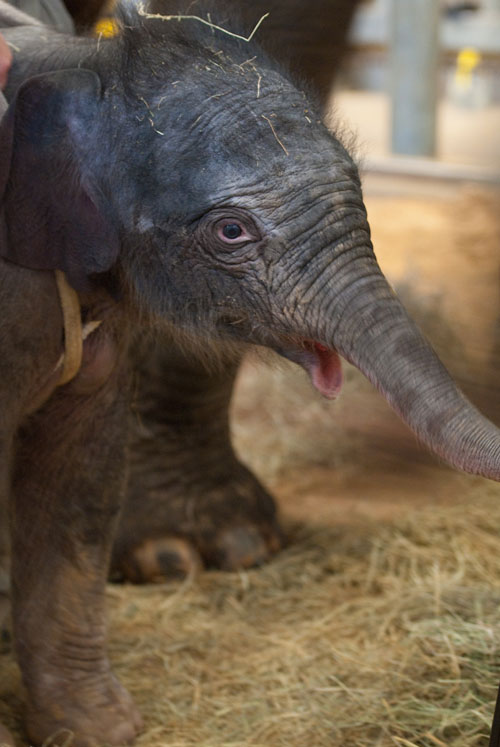 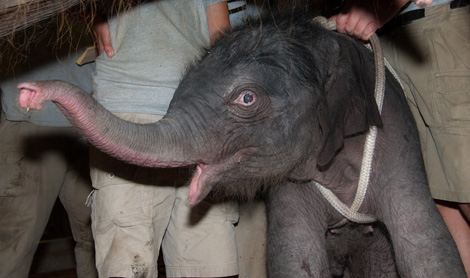 Four of the world’s smallest otters have been born and successfully reared at the UK's Blackpool Zoo for the first time in its history. The quartet of Asian Small Clawed Otters are now out and about after spending their first two months being cared for in the holt by their mother. When they are born, they weigh around 50g, are toothless, practically immobile and their eyes are still closed. Once their eyes open, usually at around 40 days, they begin to venture out and explore their surroundings. Classified as vulnerable in the wild, the species hails from the mangrove swamps and freshwater wetlands of Bangladesh, Burma, India, southern China, Taiwan, Laos, Malaysia, Indonesia, the Philippines, Thailand and Vietnam. Photographer Claire Copley caught these candid shot of one of the pups doing some thorough paw cleaning. 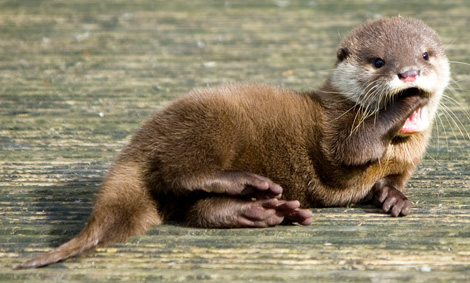 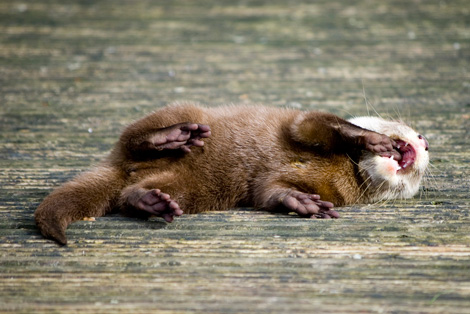 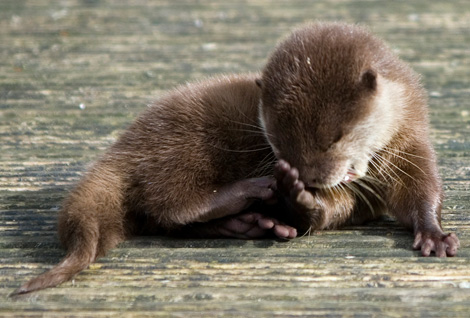 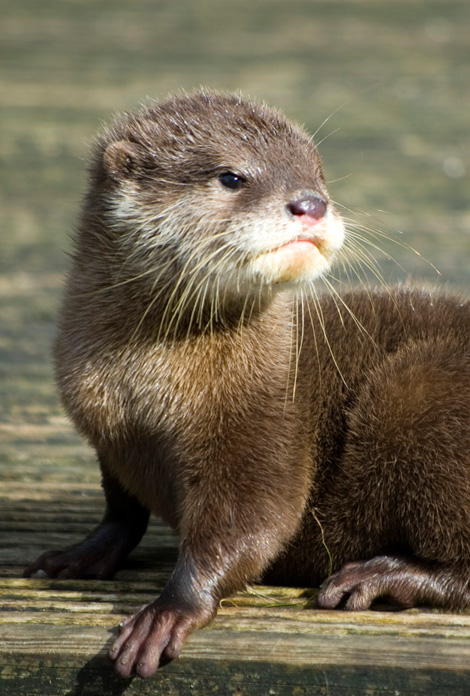 ZooBorns is pleased to share brand new pictures from the Life on White team, which aims to create the largest collection of animals photographed on white backgrounds. Featured on ZooBorns a few months back, Marvin the Red-faced Spider Monkey was born in May at the UK's Twycross Zoo. Marvin is the third animal Life on White found here at ZooBorns. According to Monori: "Our photo sessions generally take place over one week. We travel with one or two assistants in our camping car (in Europe) from one photo shoot to another. All the animals are photographed in their own environment/home so that they do not suffer any stress linked to transport or to unknown environments." 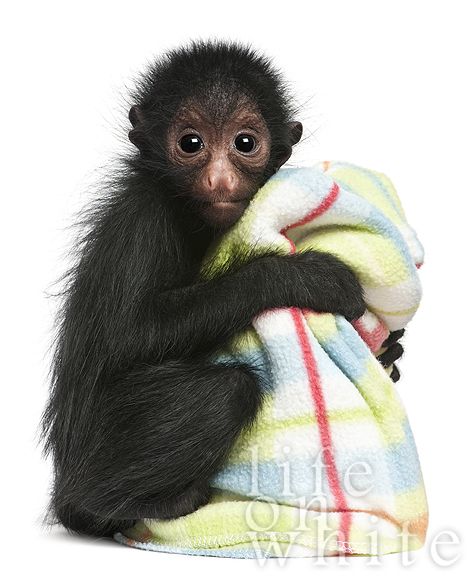 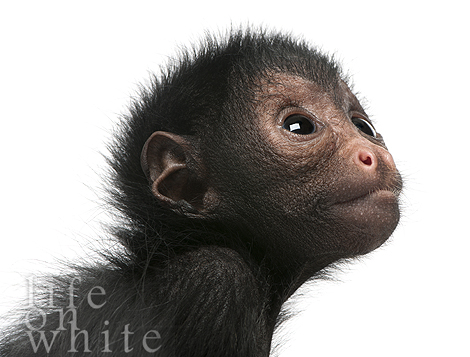 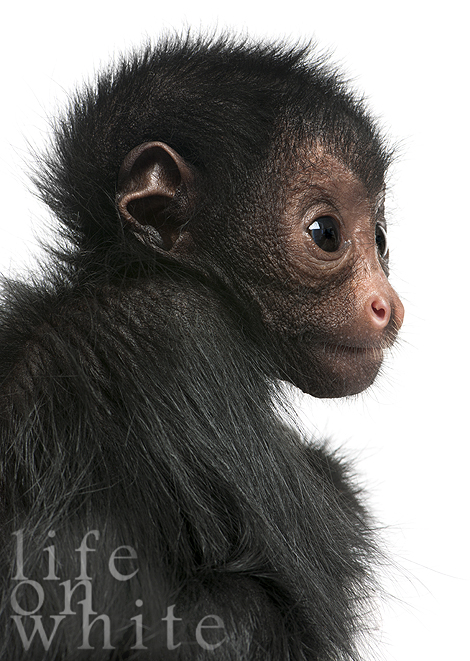 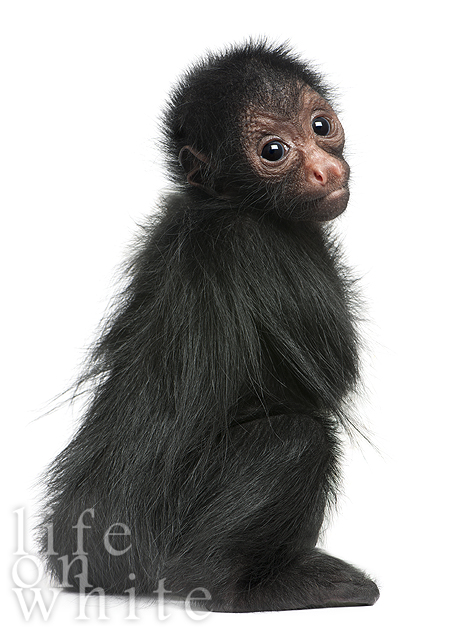 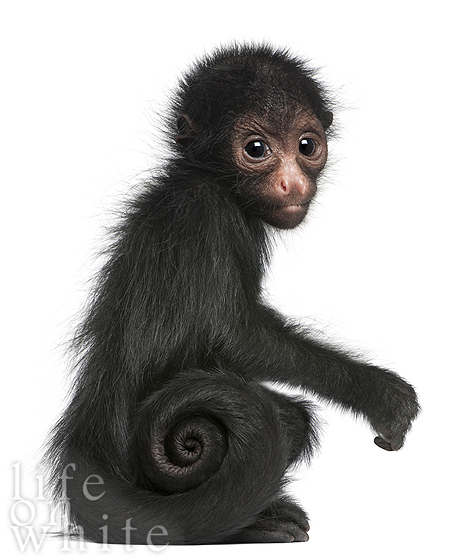 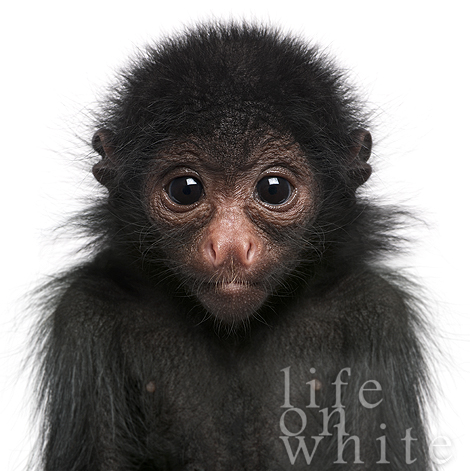 Keep up the great work Gabor!

The Oregon Zoo recently provided a temporary home for twin orphaned cougar cubs while they recuperated from malnutrition and dehydration. The cubs were transferred last week to their permanent home at the Western North Carolina Nature Center. According to Oregon Zoo keepers, the “cute and vocal” brothers have a close bond that has helped them recover from “a rough start to life.” “As a conservation organization, it’s important for us to take a leadership role in finding homes for orphaned animals,” said Kim Smith, zoo director. “These guys really needed our help.” 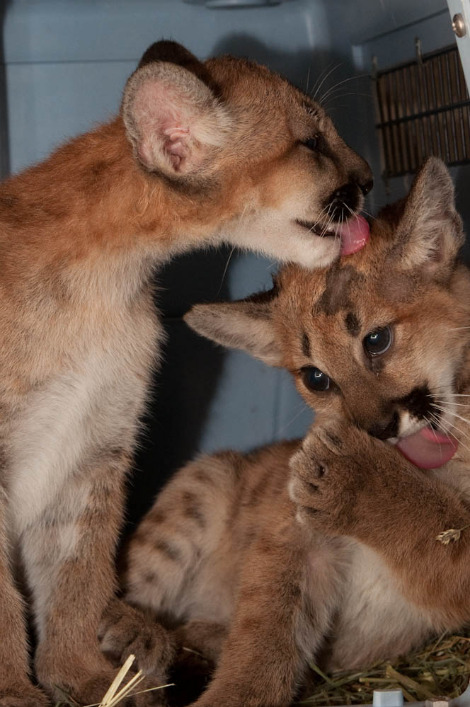 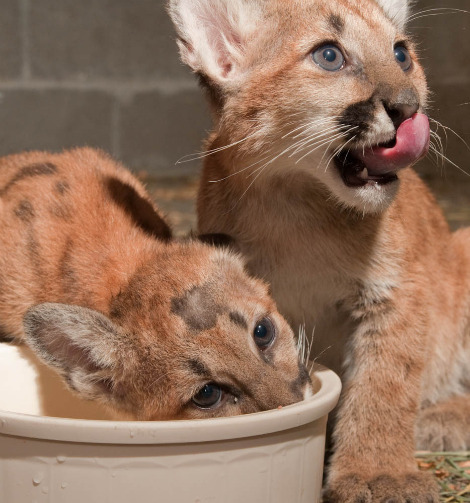 The cubs were left without explanation at a wildlife rehabilitation center in Grants Pass, Ore., in late August. When the center alerted the Oregon Department of Fish and Wildlife, ODFW in turn contacted Oregon Zoo keeper Michelle Schireman, who serves as the Association of Zoos and Aquariums’ puma population manager. “I’m usually the first person fish and wildlife departments call when orphaned cubs must be removed from the wild,” Schireman said. “I work with accredited zoos across the country to find them new homes.

Baby cougars can’t live in the wild without their mothers, so zoos offer the orphans’ only chance for survival.” Schireman was able to quickly place the 10-week-old cubs. “There are a lot of zoos around the country that would be thrilled to provide a home for a cougar, and the nature center was at the top of the waiting list when ODFW contacted me about these cubs,” Schireman said. “I’m really pleased that the brothers now have a permanent home where they can live together.”

A few months back, we brought you this adorable video of the Houston Zoo's newest and cutest baby elephant calf, Baylor, splishing and splashing in his pool.