The two unnamed female pups, born on June 7 and June 10, were abandoned by their moms at a popular tourist attraction—Pier 39 in San Francisco—which is a highly unusual place for a California sea lion to give birth. Lucky for them, they were rescued by staff from The Marine Mammal Center in Sausalito, California, eventually making their way to the Chicago Zoological Society's Brookfield Zoo. The pups are off exhibit for the moment while they get used to their new home but are doing great so far! 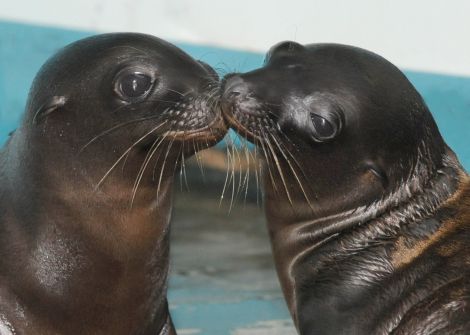 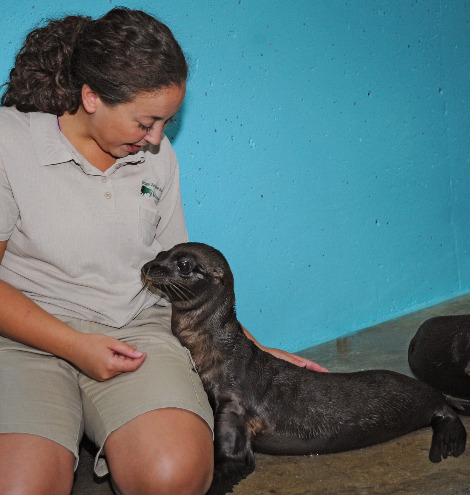 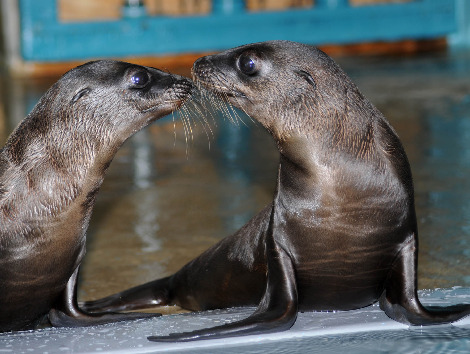 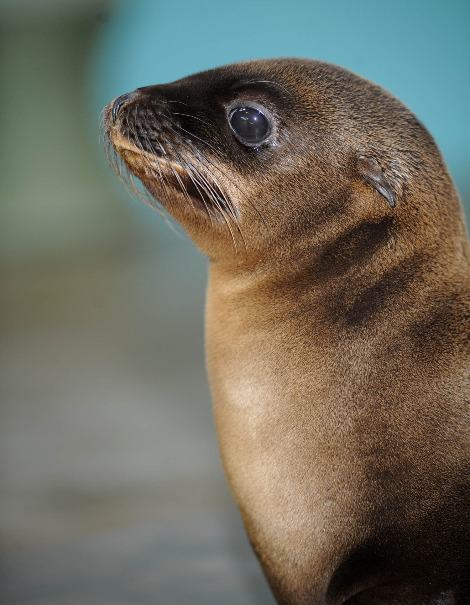 Read the whole story and see more pictures below the fold

Brookfield, IL—Thanks to the Chicago Zoological Society, which manages Brookfield Zoo, two orphaned California sea lion pups have a new home at the zoo. They are currently off exhibit and getting acclimated to their new surroundings and the zoo’s other sea lions and learning how to swim before they venture out into the bigger pools at the Pinniped Point exhibit. Staff estimate it will be several more weeks before they will be able to have access to the outdoor pools.

The two unnamed female pups, born on June 7 and June 10, were abandoned by their moms at a popular tourist attraction—Pier 39 in San Francisco—which is a highly unusual place for a California sea lion to give birth. Female sea lions normally choose rookeries such as the Channel Islands in southern California away from human traffic and other potential dangers. After birth, females raise the young pups for up to nine months. As newborn sea lions that rely on their mother for nourishment, the helpless pups would have starved to death without human intervention.

Deemed unreleaseable back to the wild due to the difficulty of rehabilitating young pups, the Chicago Zoological Society stepped forward and offered to give the sea lions a permanent home at Brookfield Zoo. This commitment is quite an undertaking because the vulnerable pups require constant care for the first several months of life. 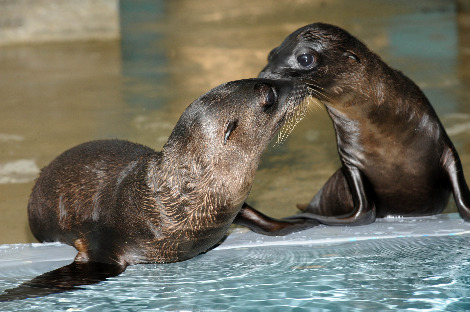 The pups were rescued by staff from The Marine Mammal Center in Sausalito, California, where they were stabilized and spent a few days prior to being transferred to Six Flags Discovery Kingdom in Vallejo until they were able to make the trip to Brookfield Zoo. During the month the pups were at Six Flags, Jennifer McGee, lead marine mammal trainer from Brookfield Zoo, took up residence in California to assist the Six Flags staff in the round-the-clock care the pups required.

“This endeavor would not have been possible without the collaboration and commitment from all three facilities,” said Rita Stacey, curator of marine mammals for the Chicago Zoological Society. “From this learning experience, we are now able to serve as a resource to other facilities that are contemplating handrearing sea lions should a need to intervene happen again in the future,” added Stacey.

Since their arrival at Brookfield Zoo, the inquisitive and rambunctious pups have doubled in weight. “By no means are they out of the woods yet, but we are very optimistic and encouraged from the behaviors we have seen that the pups will have a second chance at life here at Brookfield Zoo,” said Stacey. They are being monitored closely and will continue to be bottle-fed a specially prepared milk formula for a few more months. A new diet of fish will be introduced to them in the near future.

Although the commitment of Animal Programs staff is very intensive, the time being invested is helping the North American zoo California sea lion population. Because they were born in the wild, these new additions are extremely valuable genetically. California sea lions are managed by the Association of Zoos and Aquariums’ Population Management Plan (PMP), a program that ensures the sustainability of a healthy, genetically diverse, and demographically varied population for the long-term survival of the zoo population. The Sea Lion PMP is managed by McGee, who is also responsible for the California Sea Lion Studbook, a record of the species’ pedigree and the demographic history of each individual in the North American zoo population.

Scientists observed that pupping patterns similar to 2010 were observed during 1998 and 1999, the last major El Niño years. El Niño oceanographic conditions are characterized by warmer coastal waters, which drive sea lion prey, such as anchovies and sardines, greater distances from shore. Pregnant California sea lions and yearlings (one-year-olds) may not have the energy reserves to swim the extra distance to acquire food, resulting in females giving birth before reaching normal pupping areas, females abandoning pups because of diminished nutritional condition, and emaciation or starvation of yearlings.

Additionally, domoic acid poisoning may be a contributing factor in the unusual pupping patterns during 2010. Domoic acid is a neurotoxin that accumulates in top-level predators during harmful algal blooms and causes disorientation, lethargy, and seizures in sea lions. These neurological symptoms prevent normal foraging, causing pups to become severely emaciated, sometimes resulting in death.

California sea lion pups are born in June and July and weigh 13 to 20 pounds. They do not swim for at least two weeks and stay in tidal pools until they can go to sea with their mothers. They nurse for at least five months and sometimes for more than a year. After a few days of giving birth, a mother leaves a pup while she forages at sea. After replenishing, the mother returns to her pup and nurses it again. As the pup grows stronger, the mother leaves it alone for longer periods of time. Mother sea lions recognize their pups on crowded rookeries through smell, sight, and vocalizations.

In the early part of the 20th century, sea lions were hunted for their skins and to reduce competition with fishermen for fish. As a result, their populations declined. Today, all marine mammals, including sea lions, are protected by the 1972 Marine Mammal Protection Act. There are now hundreds of thousands of sea lions along the Pacific coast. While not endangered, they still face challenges due to human activities, including the intentional dumping of toxic and hazardous waste, entanglement in fishing gear and other debris, and changes in global atmospheric conditions.

The Marine Mammal Center’s mission is to expand knowledge about marine mammals—their health and that of their ocean environment—and to inspire global conservation. Since 1975, staff and volunteers have rescued and treated more than 16,000 marine mammals at its outdoor hospital in Sausalito. 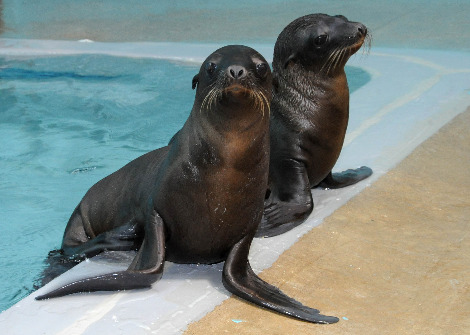 The two unnamed female pups, born on June 7 and June 10, were abandoned by their moms at a popular tourist attraction—Pier 39 in San Francisco—which is a highly unusual place for a California sea lion to give birth. Lucky for them, they were rescued by staff from The Marine Mammal Center in Sausalito, California, eventually making their way to the Chicago Zoological Society's Brookfield Zoo. The pups are off exhibit for the moment while they get used to their new home but are doing great so far!

Read the whole story and see more pictures below the fold