Little Hesty, the baby Sumatran Orangutan, got off to a rocky start back in June and July as ZooBorns readers might recall. Her mother, Nias, did not nurse her baby properly and Hesty was removed from her mother to be fed by Denver Zoo staff. Fortunately, training efforts with Hesty and Nias on how to nurse properly eventually paid off, and now all is well. Hesty made her public debut this weekend. 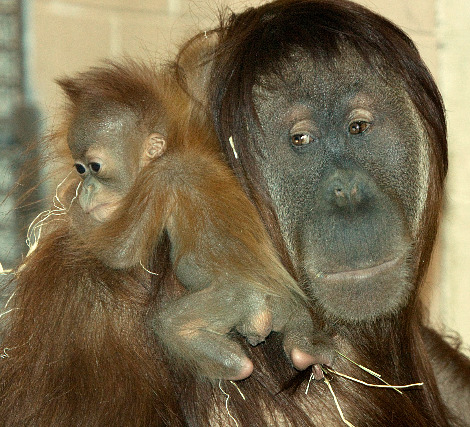 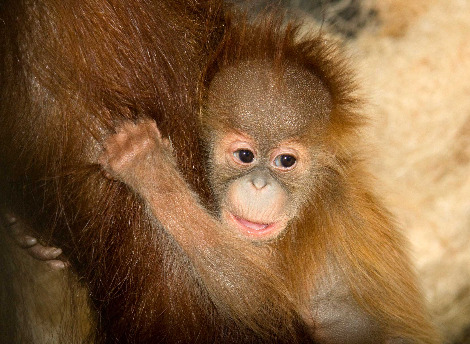 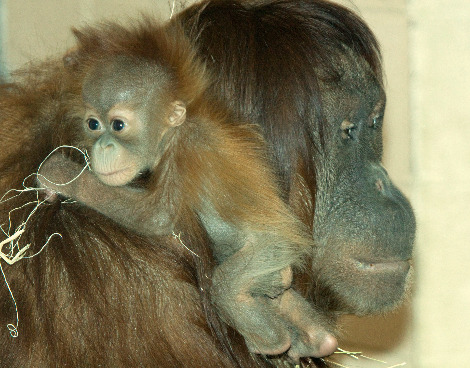 August 21 Will Be the First Day Visitors Can See Her

Denver, CO (August 20, 2010) – Denver Zoo Sumatran orangutan, Hesty (Hess-tee), will make her public debut August 21. Hesty, the first birth of her species at the zoo in 25 years, is doing fine now with her mother. This is after a rocky start to the infant’s life and two months behind-the-scenes receiving care from zookeepers and veterinary staff. Beginning August 21, visitors will be able to see them both between 10 a.m. and 3 p.m. in the Great Apes Building most days. Animal care needs may alter this schedule, however.

Hesty was born to mother, Nias (Nee-us), and father, Mias (Mee-us), on June 19. She is only the fourth birth of this species at the zoo and the first since 1985. Orangutans are tiny at birth, weighing three to four pounds and are completely dependent upon their mothers.

Although initially Hesty seemed to be doing fine, staff could not tell for sure if she was nursing regularly and on June 22, the infant appeared weak. Denver Zoo veterinarians sedated Nias to examine her and Hesty. During the examination veterinarians discovered Hesty was significantly dehydrated and placed her in the proper nursing position. Hesty ingested about 70 milliliters of breast milk and weighed 3.67 pounds at the end of her feeding.

On the morning of July 1, staff found Hesty nearly unresponsive.  Veterinary staff examined her immediately, finding she was dehydrated and unable to maintain her body temperature.

Over the next 18 days, Hesty nearly doubled her body weight from 2.86 pounds to 4.4 pounds under the care of veterinarians and zookeepers. Nias responded well when staff was able to reunite the two on July 19. However, Hesty still didn’t immediately know how to nurse. Staff sedated Nias on July 23 to teach Hesty how to find Nias’s breast and ensure she could nurse on her own. Fortunately this time, the training was successful as Hesty has been nursing on her own since July 23. Staff continues to be ready to assist Nias by providing supplemental formula to Hesty if necessary.

Planning for this infant began months ago with consistent monitoring of the pregnancy, consultations with neonatologists and regular ultrasounds of the fetus.  Zoo staff worked with Nias to train her to present her abdomen for inspection and to receive ultrasounds through a hole in the mesh of her enclosure. An exceptionally intelligent animal, staff was able to monitor Nias’s successful progress.

Training with Nias was extensive and focused on ways to help her know how to properly hold her infant and to allow zookeepers to closely examine the infant and provide supplemental feedings through the mesh of the maternity enclosure, if necessary.

Mias, Hesty’s father, was born in 1983 at Toronto Zoo and arrived at Denver Zoo in 1997. Nias was born in 1988 at San Diego Zoo and came to Denver Zoo from El Paso Zoo on a breeding loan in 2005. The two were paired together under recommendation of the Association of Zoos and Aquariums’ (AZA) Species Survival Plan (SSP®) which ensures healthy populations and genetic diversity among zoo animals. Fortunately, the couple has proved to be an excellent match.

Orangutan means “person of the forest” in Malay and the species is among the closest relatives to humans. Physically they are known for their stout bodies, long arms and shaggy, red hair. The orangutans at Denver Zoo can often be seen showing off their arboreal talents, swinging from ropes and trees in their expansive habitats.

Sumatran orangutans are only found on the island of Sumatra in Indonesia. In the wild, they are critically endangered due to habitat loss stemming from logging, mining and forest fires. Also, the practice of killing a mother to secure an infant or juvenile for the live animal trade is a common practice. Currently there only about 6,000 left in the wild.

Little Hesty, the baby Sumatran Orangutan, got off to a rocky start back in June and July as ZooBorns readers might recall. Her mother, Nias, did not nurse her baby properly and Hesty was removed from her mother to be fed by Denver Zoo staff. Fortunately, training efforts with Hesty and Nias on how to nurse properly eventually paid off, and now all is well. Hesty made her public debut this weekend.