It was love at first sight for Shama and Tate, the red pandas at the Smithsonian’s National Zoo, and now, nearly 1½ years after they were introduced, the pair has a cub as evidence of their strong bond. On Wednesday, June 16, Shama gave birth to a single cub—the first for both of the Zoo’s red pandas and the first red panda cub born at the National Zoo in Washington, D.C., in 15 years. 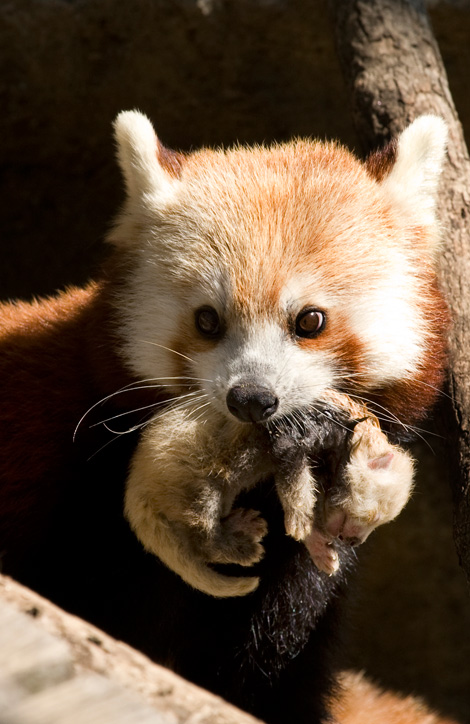 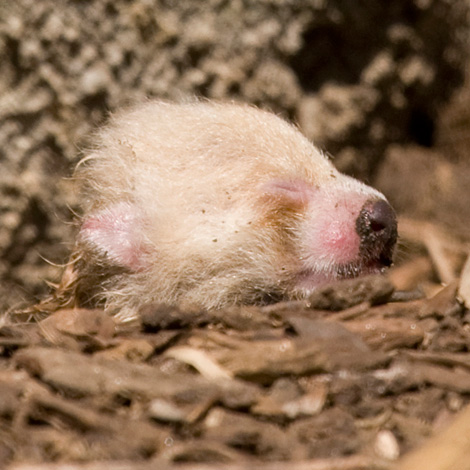 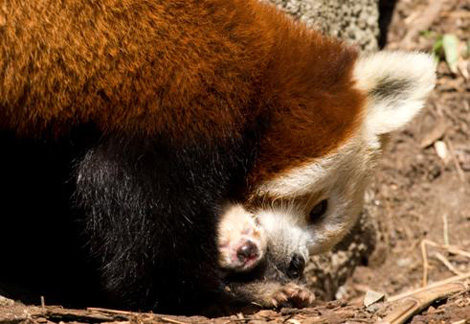 “As red panda numbers decline in the wild, a healthy, thriving captive population will become more and more important to the survival of this species,” said Dennis Kelly, director of the Smithsonian’s National Zoological Park. “Through our research, we’re proud to play an important role in saving these animals.”

Three-year-old Tate came to the Zoo from the Nashville Zoo in February 2009 to breed with 2-year-old Shama as recommended by the Association of Zoos and Aquariums’ red panda Species Survival Plan, which manages breeding in order to maintain a genetically diverse zoo population. And the red pandas did not waste any time on this directive—within seconds of their first introduction, Shama and Tate displayed breeding behavior. But because the two were inexperienced and red pandas, like giant pandas, only have a short window once a year to get pregnant, it took a few tries before Shama and Tate were successful.

“This birth indicates that the animals are comfortable and well adjusted in their home here,” said Tony Barthel, curator of Asia Trail. “We are excited about the opportunity we’ll have to watch and learn from the interactions between the red pandas as Shama raises the cub.”

According to Barthel, the cub, who weighed 6.5 ounces (184 grams) as of Thursday, June 24, appears healthy and Shama is proving to be an attentive first-time mother. To ensure that Shama and the cub have the peace and quiet they need to bond, the Zoo has closed off the red panda section of Asia Trail to the public. But once keepers determine it is safe, visitors will have a chance to welcome the newest furry member of the Zoo. As it is, visitors may be able to catch a glimpse of the mother and her cub from the upper viewing area.

The cub represents a victory not only for the Zoo, but for the conservation community as a whole. With fewer than 2,500 red pandas left in the wild, they are an endangered species as the result of habitat loss. Red pandas live in the cool temperate bamboo forests in Sichuan and Yunnan provinces in China, in the Himalayas and in Burma (Myanmar).

National Zoo scientists and biologists have a history of studying red pandas to learn about their reproduction. The new cub is an important part of that work. Current research focuses on increasing knowledge of basic reproductive traits by correlating behavior and hormones.

Shama was born at the Smithsonian Conservation Biology Institute in Front Royal, Va., which has also had recent success with a red panda birth. Three-year-old Low May gave birth June 14 to a litter of two and one cub survived. The birth may have been complicated by the fact that Low May is a first-time mother and was hand-reared after her mother failed to properly care for her. A pathology report will reveal the cause of the cub’s death. Red pandas are born annually at SCBI and more than 100 surviving cubs have been born at both the Front Royal research facility and Washington, D.C., campuses since 1962.

Note: Viewing of the red pandas is extremely limited. The cub has not emerged from the den in the heat, and the area will continue to be closed off until Zoo staff determines that Shama and her cub are fully adjusted.

It was love at first sight for Shama and Tate, the red pandas at the Smithsonian’s National Zoo, and now, nearly 1½ years after they were introduced, the pair has a cub as evidence of their strong bond. On Wednesday, June 16, Shama gave birth to a single cub—the first for both of the Zoo’s red pandas and the first red panda cub born at the National Zoo in Washington, D.C., in 15 years.