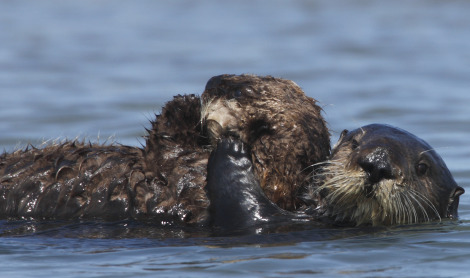 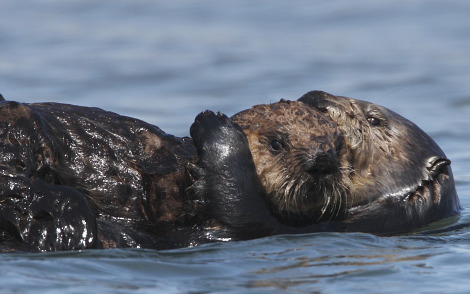 It’s a tale of four mothers.

“These births and the successful weaning of pups in the wild by surrogate-reared individuals is significant because it indicates that these sea otters are not only surviving following release, but also contributing reproductively to the wild population,” said Animal Care Coordinator Karl Mayer with SORAC. “This is the benchmark of successful rehabilitation and reintroduction efforts.”

A 5-year-old adult female known as “MBA 327” gave birth to her second pup (gender unknown) around March 19 in waters near Moss Landing. Mother and pup appear to be healthy and active. Sea otter 327 previously delivered a male pup in March 2009 that she successfully reared, then weaned last September.

A nearly 5-year-old adult female, “MBA 339,” was the first surrogate-reared animal in SORAC’s care to give birth in the wild when she delivered a male pup in July 2008, which she successfully reared and then weaned in March 2009. This year she gave birth to her second pup (gender also unknown) around April 14, also near Moss Landing. Mother and pup appear to be healthy and active.

Mayer said he and other SORAC staff will monitor both pairs of mothers and pups regularly to document pup survival and development, and to collect data on mother/pup foraging behaviors and movement patterns.

More information about the nonprofit aquarium’s groundbreaking SORAC program can be found at http://www.montereybayaquarium.org/cr/sorac.aspx. The story of the birth of these pups, as well as photos of one of the mother/pup pairs, are on the aquarium’s Sea Notes blog at www.seanotesblog.org.

Sea otter 327 came under SORAC’s care in March 2005 after she washed ashore at Morro Strand State Beach (Cayucos) as a three-day old pup; sea otter 339 stranded at Manresa State Beach in Santa Cruz County in October 2005 when she was about four weeks old.

Under the aquarium’s protocols for handling stranded pups, both were bottle-fed by staff and volunteers, who wear black nylon ponchos and a welder’s helmet to hide their human form and eliminate eye contact with pups in their care. The disguise is used to keep pups from imprinting on humans.

At about eight weeks when she began to eat solid food, SORAC caregivers introduced sea otter 327 to Toola, one of five female exhibit sea otters at the aquarium. She remained with surrogate mother Toola behind the scenes until weaning at about six months old. Sea otter 339 was reared by Joy, another aquarium exhibit animal, who served as her surrogate mother for four months.

After the pups were weaned, both were implanted with a radio transmitter to allow SORAC staff to keep track of them when they were eventually returned to the wild.

Since 2005, the aquarium’s sea otter staff have raised and released stranded pups using three exhibit sea otters – Joy, Toola or Rosa – who rotate behind-the-scenes duties as surrogate mothers. SORAC staff closely monitor young animals once they’re released, and may recapture those that are not foraging or navigating well. They are brought back to the aquarium to rest and gain weight before being re-released; sometimes it can take three or four attempts before a young sea otter successfully adapts to life on its own in the wild.

The goal of the SORAC surrogate program is to return to the wild pups that will assimilate into the breeding population and produce offspring of their own. Staff continually evaluates the program’s effectiveness by studying the behavior and survival rate of pups after release.

“We’re establishing that the methods we use to rear stranded pups enable them to reproduce as part of the wild population,” Mayer said. “And that means not just giving birth, but getting their pups through the dependency period and weaned. That’s the benchmark for our program.”

Preliminary evidence suggests that surrogate-reared pups have a fairly high rate of survival in the wild. Sixty percent have survived a minimum of one year after release, compared to less than 30 percent survival for pups reared exclusively by people.  Reproductive success of survivors is still being evaluated. Currently, there are seven surrogate-reared otters in the wild, three males and four females. Of the females, three are currently of breeding age and all three have given birth and successfully weaned pups in the wild.

The Monterey Bay Aquarium has been involved in sea otter conservation efforts starting before it opened its doors in 1984. The sea otter research team has made progress in understanding the conservation and natural history of the southern sea otter, and pioneered many of the medical and surgical procedures used to keep sea otters healthy in zoos and aquariums around the world.

SORAC staff also helped rescue and rehabilitate sea otters in Alaska following the 1989 Exxon Valdez oil spill, and are involved in field studies of sea otters around the Pacific Rim.

The aquarium’s SORAC team has worked with colleagues for more than 20 years to document the foraging habits, population dynamics and behavior of hundreds of sea otters. Their studies help provide a picture of an average day in the life of a southern sea otter (Enhydra lutris nereis) – a threatened species in California’s coastal waters. Researchers hope that their work will help explain why the wild population – which over the past three years averaged 2,813 animals – is rebounding so slowly.

A recent disturbing trend in the southern sea otter population is relatively high mortality among reproductive-age adults from infectious diseases. The SORAC team also works with the broader scientific community in a collaborative effort to identify underlying causes of disease and examine the connections between land-based pollution and disease in otters.

The SORAC program is famous for its signature efforts to rescue and treat stranded pups and injured adults. Through professional alliances and with other aquariums and wildlife rescue facilities in

California, the SORAC program responds to every live-stranded sea otter in the state. Until the aquarium began caring for stranded sea otter pups in 1984, virtually nothing was known about how to keep pups alive once they became separated from their mothers.

Over the past two decades, nearly 500 sea otters – both adults and pups – have come through the SORAC program, and the aquarium’s staff and veterinarians have developed diets and care protocols that have resulted in a high survival rate for stranded pups and injured or diseased adults.

Much of this work is supported by the aquarium’s endowment fund, as are many other conservation and education initiatives.

The mission of the Monterey Bay Aquarium is to inspire conservation of the oceans. 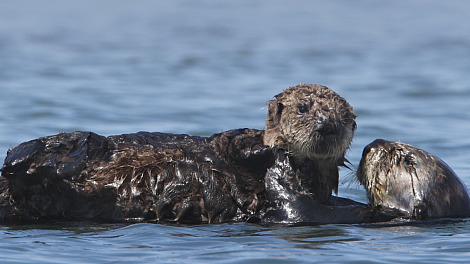