Two sand cat kittens were born at the Al Ain Wildlife Park & Resort in the United Arab Emirates. The kittens’ birth was a result of an assistive reproductive technique called in-vitro fertilization and embryo transfer. This marks the first time the procedure was successful in Sand cats. The research project is on-going and includes captive sand cat populations in the United States and Europe and is conducted in collaboration with the University of Illinois and the Cincinnati Zoo. 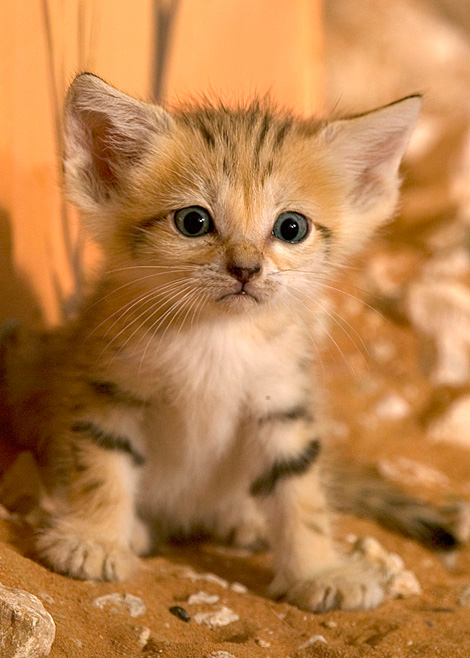 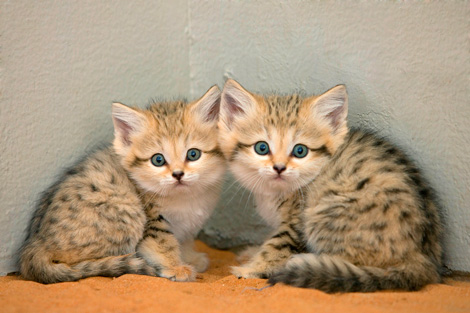 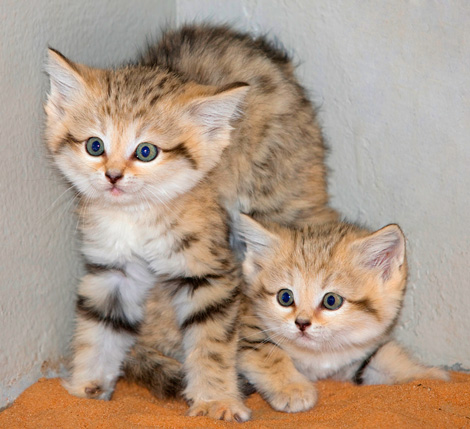 The Al Ain Wildlife Park & Resort (AWPR) announced the first-ever birth of 2 Sand cat kittens following an in vitro fertilization and embryo transfer procedure at its facilities in Al Ain. The success of the program marks an important step forward in its efforts to conserve this threatened cat species and other arid land carnivores such as the Arabian leopard.

In October AWPR initiated Project Sand Cat in partnership with the US-based University of Illinois and the Cincinnati Zoo and Botanical Garden– both world leaders in endangered species research. Fresh sperm and eggs collected from male and female Sand cats were fertilized in an incubator to produce 50 embryos. Twenty-one of those embryos were transferred into 4 host cats, one of which recorded a successful pregnancy. The remaining 29 embryos were frozen and transported to the Cincinnati Zoo for similar trials.

“No Sand cat kitten has ever been born as a result of in-vitro fertilization and embryo transfer. Our Sand cat mother gave birth to 2 kittens. The kittens and mother are in a very good condition” said Farshid Merhdadfar, the Animal Collection Manager at AWPR.

According to AWPR’s Chief Programs Officer, Dr. Mike Maunder, the goal is to develop protocols for embryo transfer that can be used for the Sand cat and other more threatened species such as the Arabian leopard. “This technique will allow Sand cats, and other threatened species, held in the UAE to contribute to the breeding work of conservations institutions throughout the world,” explained Dr. Maunder.

AWPR is home to almost 20% of the world’s captive Sand cats. The 34 Sand Cats at AWPR make up the largest and most genetically significant captive population of Sand cats at any single zoological institution in the world.

These in-vitro fertilization and embryo transfer would not be possible without AWPR’s large number of Sand cats. Eggs were harvested from five female donors, fertilized with the sperm from three male Sand cats, while the resulting embryos were implanted into a separate group of four female recipients.

Embryo transfer is an important technology for conservation efforts. Embryos fertilized at AWPR can be frozen and later implanted into recipient groups across the world. “We can exchange genetic material without having to transport the animals themselves. This is a model in managing threatened wildlife species in the future,” explain Dr. Swanson.

According to Dr Bill Swanson, Director of Research at the Cincinnati Zoo, “These cats at AWPR are totally unrelated to other Sand cats held anywhere in captivity. To introduce their genetic material to other populations helps build a stronger and more viable captive population”.

If test-tube babies from AWPR’s Project Sand Cat are born to Sand cats at zoos in the United States , they will carry the genetic material from AWPR’s Sand cats. As AWPR’s foreign born Sand cats mature in collections in the United States, they will be bred with their US-based counterparts. This process diversifies the gene pool of captive Sand cat populations. One such trial of the embryos fertilized at AWPR is underway at the Living Desert Zoo in California.

Project Sand Cat is a pilot project within AWPR’s conservation program. The conservation work at AWPR focuses on the conservation and restoration of arid land biodiversity and has a special focus on desert carnivores including current work with Arabian leopards, African wild dogs, and lions.

The Sand cat (Felis margarita harrisoni) are thought to be near threatened in the wild with depleting populations. Sand cats are native to the Middle East and UAE. Due to their reclusiveness very little ecological information is known about the Sand cat and the factors of their survival are yet to be thoroughly understood.

The smallest member of the cat family found in Arabia, the Sand Cat is well adapted to a desert environment. Its range extends from North Africa to Arabia and into central Asia. A short legged animal, it stands up to 26cm at the shoulder and weighs up to 3kg. Both sexes have a thick, pale coat ranging from sandy brown to grey, with white belly, chest and  lower muzzle. There are black stripes on the limbs. The tail is black tipped and ringed with black markings near the end. Their head is broad with large ears set low on the side, giving them an excellent sense of smell and hearing. Inhabiting the stony and sandy desert regions, these cats must endure temperature changes of -5 to 58 degrees Celsius. The pads of their feet are insulated from the heat by thick fur growing between their toes, and this also allows the animals to move across the sand more easily. Largely nocturnal hunters, sand cats burrow into the dunes to escape the heat. At night, they may range up to 5.4km in search of food which consists of birds, jerboas, hares, reptiles and insects. They have been known to take on and eat poisonous snakes such as the horned sand viper.

Solitary animals, sand cats only come together for mating. Seasonal breeders, The average litter born in April, consists of between two to five kittens. The young are blind, weighing 39gms and are 13cm in length. At approx. 13 days old they open their eyes, can walk at 21 days old, and become fully independent at 6-8 months of age.

Sand cat populations throughout their range are believed to be on the decline, due to habitat loss and reduced populations of their prey species.

The Arabian sand cat is rarely seen and accurate numbers of this subspecies has yet to be determined.
Did you know: Sand cats can be found far from a water source and get all their moisture from their prey?
Felis margarita is named after the French General Margueritte who explored the Sahara.

There are six described subspecies of sand cat.

Two sand cat kittens were born at the Al Ain Wildlife Park & Resort in the United Arab Emirates. The kittens’ birth was a result of an assistive reproductive technique called in-vitro fertilization and embryo transfer. This marks the first time the procedure was successful in Sand cats. The research project is on-going and includes captive sand cat populations in the United States and Europe and is conducted in collaboration with the University of Illinois and the Cincinnati Zoo.