The National Aquarium in Baltimore has just released pictures and video of their two day old dolphin calf. The calf appears to be healthy, swimming alongside mother Jade and 31 year old Shiloh who is an experienced dolphin mom. Watch video of the birth below and follow all the progress on this bright-eyed and slippery-tailed calf on the National Aquariums blog in the days to come. 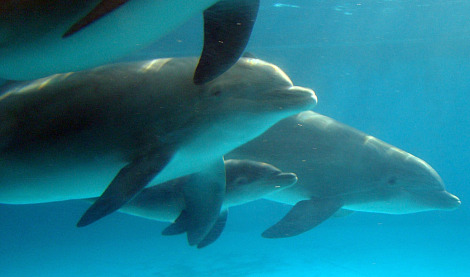 UPDATE: Sadly this calf passed away on Monday, March 22nd. The cause of death was not yet known at the time of this update, but the age and rapid decline of health suggests an infection, which is not uncommon for dolphin calves. ZooBorns extends its condolences to National Aquarium staff.

Baltimore, March 12, 2010 – Staff and volunteers at the National Aquarium are excited to announce the newest addition to the dolphin colony: At approximately 9 p.m. on Wednesday, March 10 Jade, an 11 year old Atlantic bottlenose dolphin, gave birth to her second calf. At birth the calf was approximately 30 lbs and 2-3 feet long. The sex of the calf is undetermined at this time.

The calf is very alert and appears to be healthy. It has been swimming along alongside Jade and Shiloh, a 31 year old experienced mother, taking synchronized breathes with Jade, and has started to nurse. The trainers are cautiously optimistic about its progress.  Even with a successful birth and experienced motherly care, some 33% of calves do not survive their first year of life in either ocean or Aquarium settings.

"We do everything we can to provide the right habitat conditions, nutritional needs and care for the mother and calf, their survival depends more on the mother than anything else,” commented Sue Hunter, director of animal programs at the National Aquarium. “Jade is lucky enough to have two other female dolphins in the nursing pool who can assist her with motherly duties, and our staff is prepared to help with feeding if necessary.”

The new calf joins ten other Atlantic bottlenose dolphins in the Aquarium pools, including two other youngsters. Foster is Jade’s first calf and will turn three in September. Bayley is the youngest of the dolphin colony and will turn two years old in July. Both appear to be curious about the new arrival but are staying out of the way of the mom and calf for now.

To allow ample time for the calf and mother to bond, and for the calf to become accustomed to its new surroundings, the amphitheater will be closed for 24-48 hours and all dolphin shows suspended.  As marine mammal trainers and veterinarians become confident that the mom and calf have had ample time to bond in a quiet setting and are ready for visitors and activity, the amphitheater will be re-opened for the public quiet dolphin shows and presentations.

In the meantime, visitors can see most of the dolphins through the underwater viewing windows and interact with dolphin trainers and education staff.

Over the next few months trainers and volunteers will monitor the progress of the calf through around the clock observations.  The calf will live on its mother’s milk for the first three months of life; trainers will begin to offer the calf fish at about 3 months of age.  As the calf develops the Aquarium will determine plans to name it.

The public is encouraged to visit Waterlog, the Aquarium’s blog, at www.aqua.org/blog to see a video of the new dolphin calf, and TXT the word DOLPHIN to 30644 to receive dolphin and other news from the Aquarium.

The National Aquarium in Baltimore has just released pictures and video of their two day old dolphin calf. The calf appears to be healthy, swimming alongside mother Jade and 31 year old Shiloh who is an experienced dolphin mom. Watch video of the birth below and follow all the progress on this bright-eyed and slippery-tailed calf on the National Aquariums blog in the days to come.