On December 5th, after thirteen months of gestation, Baird's Tapir mother "Abby" gave birth to a healthy female calf at Massachusetts' Franklin Park Zoo. The baby girl weighed just 21 lbs. at birth, compared to her mother's weight of 700 lbs.  Her keepers named her "Tupelo," after the honey, because of her sweet disposition. 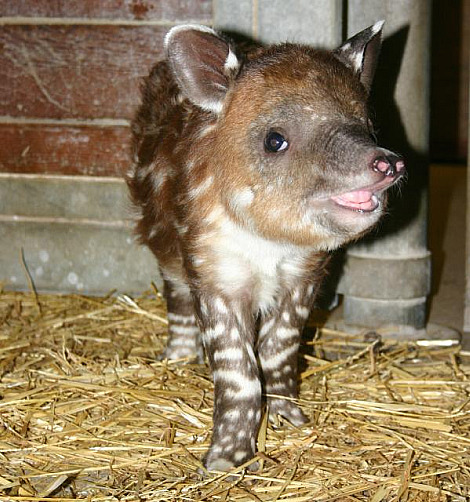 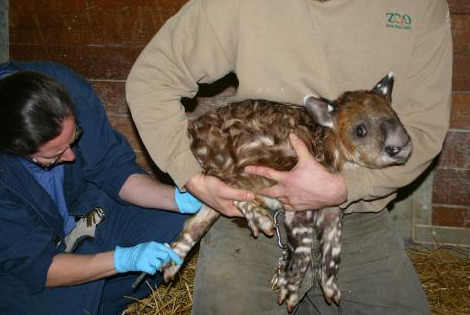 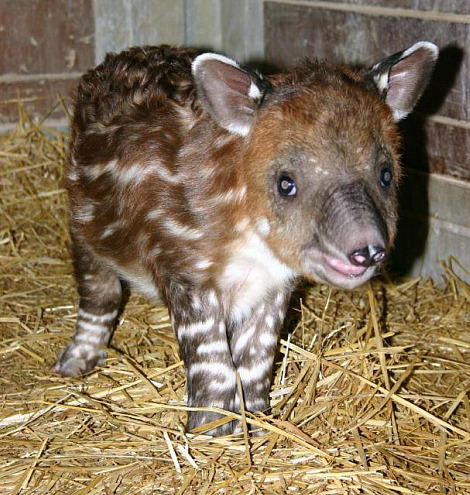 Boston; December 14, 2009 – The staff at Franklin Park Zoo is pleased to announce the birth of a Baird’s tapir.

The baby, a female named Tupelo, was born December 5 to Milton, a 20-year-old male, and Abby, a 5-year-old female. This is the second offspring for Milton and Abby. Zookeepers named the calf after Tupelo honey because it is sweet and highly-prized. Like the honey, the baby is described as having a “sweet” disposition.

The baby’s arrival was long-awaited by the animal care staff as the gestation period for Baird’s tapirs is 13 months. Baird’s tapir calves are distinctly marked with watermelon like white stripes, which help to camouflage them in the rainforest. The stripes begin to fade between five and six months of age. Tupelo weighed 21 pounds at birth. Conversely, her mother Abby weighs just over 700 pounds.

“Given the small size of the North American captive population, this is a very important birth for this endangered species. Because the sex ratio within the captive population is so skewed, the birth of a female is extremely significant and something to really celebrate,” said John Linehan, Zoo New England President and CEO, who added, “The baby has been nursing, walking and following its mother, which are all very good signs. As with any new birth, the zookeepers and veterinary care staff are carefully monitoring the health of the new calf.”

ZNE participates in the Baird’s Tapir Species Survival Plan (SSP), which is a cooperative, inter-zoo program coordinated nationally through the Association of Zoos and Aquariums (AZA). SSPs are designed to maintain a genetically diverse and demographically stable captive population. Because the AZA managed population is so small – 22 males and 12 females (including the new calf) – every successful birth and survival helps to secure the captive population. Milton and Abby’s first offspring, a male named Seamus, was born in March 2007 and recently left Franklin Park Zoo for his new home at the Baton Rouge Zoo.

Baird’s tapirs – the largest land mammal found in South America – are considered endangered in the wild. While they are hunted for food and sport, their greatest threat to survival is habitat destruction due to logging and clearing of land for agriculture and development. In addition to humans, jaguars are the only other significant threat to this animals’ survival in the wild.

The Baird’s tapirs at Franklin Park Zoo make their home in the Tropical Forest. The baby is expected to make its exhibit debut within a few weeks.

On December 5th, after thirteen months of gestation, Baird's Tapir mother "Abby" gave birth to a healthy female calf at Massachusetts' Franklin Park Zoo. The baby girl weighed just 21 lbs. at birth, compared to her mother's weight of 700 lbs.  Her keepers named her "Tupelo," after the honey, because of her sweet disposition.