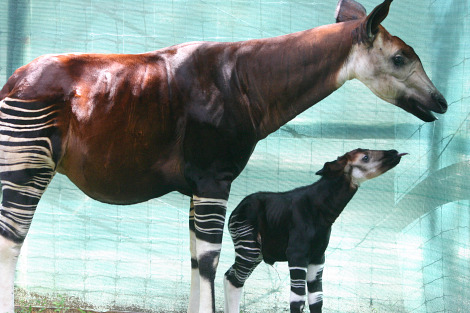 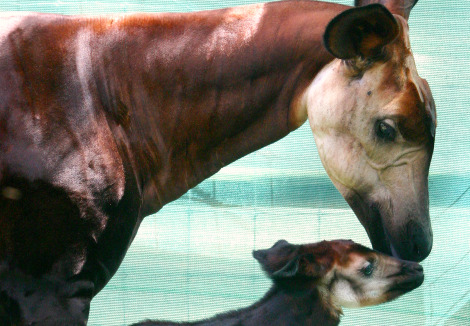 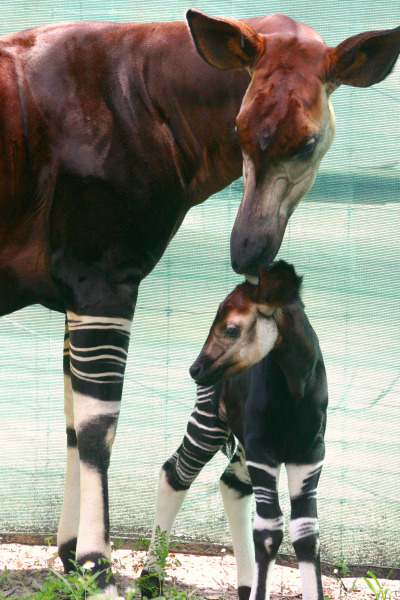 TAMPA, Fla. (October 8, 2009) – A rare okapi was born Saturday evening, October 3, at Tampa’s Lowry Park Zoo in an exhibit area known as the Ituri Forest, named after the dense tropical rain forests in Africa where the species originates. The okapi calf, a female, is the first offspring for both parents and marks the first okapi birth at the Zoo since the adult animals arrived and were introduced in 2007.

Only discovered in the 20th Century, these large hoofed mammals are found in the rain forests of northern, central and eastern regions of Democratic Republic of Congo (DRC).  The species is a shy and reclusive forest dweller and is the only living relative of the giraffe.

The Zoo’s okapi pairing was recommended by the Okapi Species Survival Plan (SSP), managed by the Association of Zoos and Aquariums (AZA) to help ensure the survival of select wildlife species.  Okapis are listed as a threatened species, with continued loss of habitat and political unrest in their native region.  Within North American wildlife institutions, there are a total of 83 individual okapis living among 22 AZA-accredited facilities.  An average of 9-10 births are anticipated per year, with eight live calves recorded this year to date.

“Okapis represent a part of Africa that still has one of the world’s most intact wilderness areas,” said Craig Pugh, deputy director, acting CEO, Tampa’s Lowry Park Zoo.  “The Ituri Forest is home to a tremendous concentration of animal and plant species found nowhere else. The Ituri Forest, like forests along the Hillsborough River, protects watersheds and filters pollution from the air, benefitting all life on earth.  Work among zoos for okapis and other species conservation is a vital part of global efforts also to conserve the habitats on which their survival depends.”

Also known as the forest giraffe, okapis have reddish-brown, velvet-like coats with horizontal zebra-like striping on their hindquarters and legs. The unique color pattern allows them to disappear into the dense vegetation in the forests where they live.  The body shape is similar to that of the giraffe, but okapis have much shorter necks.  These unusual animals also have large upright ears with a keen sense of hearing, and long, dark prehensile tongues that they use to pluck vegetation from trees and shrubs.

In 1987, the Okapi Conservation Project was founded to secure a protected area in the Ituri Forest region of the DRC for the okapi and other native species.  The goals of the project are to train and equip wildlife guards to protect the area from poachers, provide community assistance to people living around the reserve, educate people about sustainable use, and provide care for a breeding group of okapi in the reserve.  Tampa's Lowry Park Zoo provides annual support for this project, in addition to housing okapi at the Zoo.

“Within zoos, the okapi population is relatively small,” noted Ann Petric, okapi species coordinator.  “Every individual is important, and every birth is a cause for celebration. With a gestation of approximately 14.5 months (or 440 days), the population grows slowly and the learning curve is steep for first time okapi mothers.”

As a new mother, “Betty” has responded extremely well to the newborn in this first week, exhibiting very attentive behaviors and established nursing.  Mother and calf will spend time together off exhibit for the newborn’s safety and privacy in bonding.  The father, “Zack,” will be separated from the pair for the time being.

“We are very pleased with the successful birth and are delighted that Tampa’s Lowry Park Zoo has contributed to the long term sustainability of this very unique species,” said Dr. Larry Killmar, the Zoo’s director of collections.  “The animal care staff has done an outstanding job managing these animals and implementing the husbandry guidelines to achieve this successful outcome.”

Tampa’s Lowry Park Zoo participates in 40 SSPs including okapi.  The Zoo’s Ituri Forest habitat area, which houses the okapi exhibit, was made possible by funding provided by the Hillsborough County Board of County Commissioners.  The Zoo also acknowledges with gratitude the generous support of the L.V. Thompson Family Foundation in its sponsorship of the okapi exhibit.