Mother giraffes give birth standing up, so newborn calves drop 6 feet to the ground. However, baby giraffes are often 6 feet tall and upwards of 150 lbs., so they don't seem to mind. Born October 23rd, the new giraffe calf at the Virginia Zoo promises to be a tall girl as her father, Billy, is on his way to being the tallest giraffe in North America, standing at 17 feet and still growing. 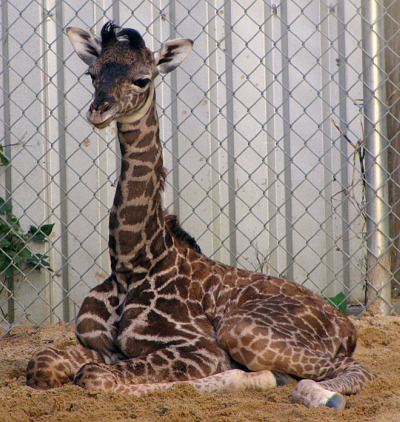 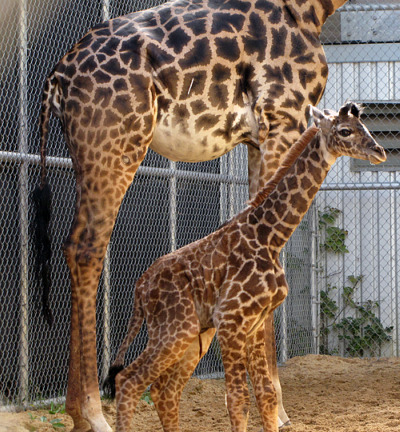 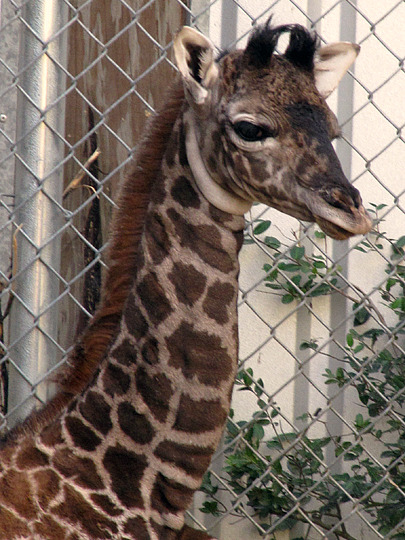 This Baby Is Six-Feet Tall!

Norfolk, VA – The Virginia Zoo is pleased to announce the birth of its tallest baby – a female giraffe born last night, Wednesday, October 21 at 9:15 p.m.  The gestation period for giraffe is 15 months, so this birth has been long anticipated by Zoo staff.  The yet named baby experienced a 6-foot headfirst drop at birth – a standard start for this species.

“The idea of a six-foot drop sounds scary to people, but it’s normal for a giraffe,” explains executive director Greg Bockheim. “It helps stimulate breathing to get the baby on its own – and since baby giraffe can be 6-feet tall and 150 pounds, the fall doesn’t seem so far to them. However, despite their size, all large animal babies are considered to be vulnerable for at least 24 to 48 hours after birth. We are going to take a conservative approach to give her the best start, even if that means keeping mom and baby off exhibit for a few days. ”  He adds that no newly born animal is out of danger until it has mastered physiological and biological functions from bonding with its mother and nursing to negotiating its own large size and the obstacles in it environment – including the members of its herd.  Mom and baby can be observed by Zoo visitors through viewing windows into their stalls throughout the day.

Parents are 7-year-old female, Imara, and 8-year-old male, Billy. And the new little girl is their first calf. The other adult member of the Zoo’s giraffe tower (another name for a giraffe herd) is 7-year-old Keana. “Our giraffe have only recently reached reproductive maturity. This healthy birth marks is an exciting milestone for our giraffe collection,” says Bockheim, who adds that this is the first birth for Imara. Newborn giraffe can stand and walk within 1 hour of birth, and they can start eating leaves at 4 months old. In the wild, young giraffes don’t wander much after birth. They tend to lie in the grass while mom provides protection. At the Zoo, the baby won’t need protection from predators, but Mom – and zookeepers – will keep a vigilant watch over the newborn.  The barn will remain closed for a day or two to give mom and baby privacy, when it reopens, visitors will be able to view the new family from the viewing windows.

Imara is from the Roger Williams Park in Rhode Island and can easily be distinguished from other female in the tower, Keana, by her longer tail hair. Imara is 14 feet tall, and like her companions is cautious, but inquisitive. She may run away from something new at first, but she usually will come back to check it out. Imara also has a big appetite, according to her keepers.

Billy easily stands head and shoulders over any other Zoo residents. In fact, his father is the tallest giraffe in North America, and at 17 feet, Billy is still growing.  The Virginia Zoo is confident Billy will soon out grow his father and put Norfolk on the map as home of the tallest giraffe in North America.  Billy is a gentle giant, though, with a calm demeanor, although he’s been known to get excited when it rains and start running.  Billy came to Norfolk from the Cleveland Zoo.

Giraffe are the only mammals to have horns at birth. As adults, their necks are around 5-feet long, although they have only 7 vertebrae – the same as all other mammals, including humans. Their 18-inch tongues are blue – which is a natural sunscreen to protect them from getting burned when reaching for leaves in tall trees. Giraffe have acute eyesight, and smaller animals in the wild rely on them as an alarm system. With their excellent sight and long necks, they spot danger before their smaller companions, and when giraffe begin to run away, the other animals use that as a signal to flee as well.  Visitors to the Virginia Zoo can see proud papa, Billy, and other animals daily from 10 a.m. to 5 p.m.

Mother giraffes give birth standing up, so newborn calves drop 6 feet to the ground. However, baby giraffes are often 6 feet tall and upwards of 150 lbs., so they don't seem to mind. Born October 23rd, the new giraffe calf at the Virginia Zoo promises to be a tall girl as her father, Billy, is on his way to being the tallest giraffe in North America, standing at 17 feet and still growing.