Zoo keepers and veterinary staff at Denver Zoo are working around the clock to care for emperor tamarin twins, orphaned after the death of their mother. Yana, the twins’ mother, died on July 30, just three weeks after giving birth from cancer. 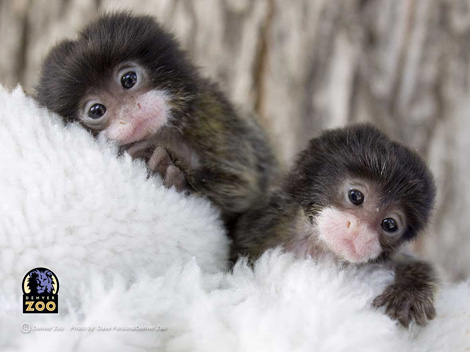 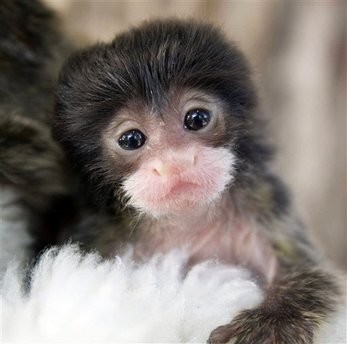 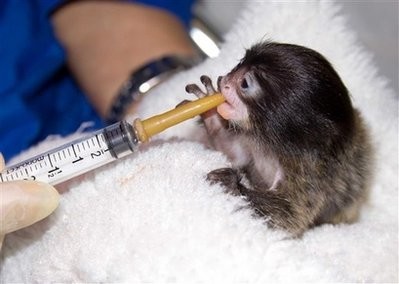 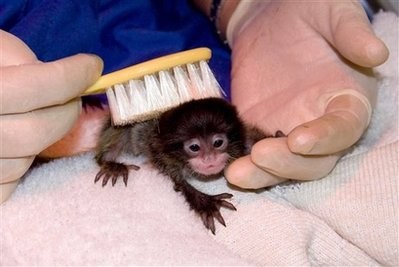 “It was such a shock to lose Yana, as she did not show signs of illness. She was a wonderful mother and we are trying to fill her role in every way, providing the best care and nutrition for these twins. So far, they are doing great and we are pleased with their progress,” says Curator of Primates and Carnivores Beth Jo Schoeberl.

The two tiny female emperor tamarins, Lara and Lucy, can be seen for now in the zoo’s nursery. Guests can watch zoo keepers feed the twins at 10:30 a.m. and 4:30 p.m. As the twins progress, they will spend more of their time in the Emerald Forest Building with Paddy, their older brother. Paddy was very attentive to the twins and was seen assisting mom with babysitting duties, before she died. Unfortunately, the twins’ father, Cute, also passed away due to old age during Yana’s pregnancy.

The twins are hand fed a special New World primate formula from a syringe with a nipple, as well as some solids including callitrichid and marmoset diets. Recently they have been offered some chilled vegetables to chew on while they are teething. So far feedings have gone well and the tamarins continue to gain weight.

In addition to providing balanced nutrition, zoo staff has also tried to mimic some important aspects of life with their mother. Staff created a “baby bouncer” contraption which encourages the twins to hang on to a moving replica of mom. This helps the tamarins gain muscle strength and coordination, as they would normally cling to mom as she maneuvered through the tree tops.

Emperor tamarins are found in the tropical forests of Central America, specifically Bolivia, Brazil and Peru, where they forage the trees and forest floor for a variety of insects, fruits and nectar.  Many other tamarin species can be found throughout Central and South America. Although emperor tamarins are not currently listed as a threatened or endangered species with the International Union for Conservation of Nature (IUCN), wild population numbers have been decreasing due to the destruction of their habitat by humans.

Emperor tamarins live in family groups comprised of three to eight individuals.  The burden of successfully raising young is shared by all adult troop members, each taking turns allowing the newborns to ride on their backs.  In the wild, emperor tamarins also form associations with another species of monkey, the saddleback tamarin.  It is theorized that their co-existence is mutually beneficial when it comes to detecting predators.  The emperor tamarin appears to be better at detecting aerial predators, while the saddleback tamarin specializes in detecting predators on the forest floor.

Grey in color, and characterized by the presence of a long white mustache and red tail, the emperor tamarin was first named in the early 1900s.  The name “emperor,” refers to the species unmistakable moustache which was believed to resemble the moustache of a German emperor from the 19th century.

Zoo keepers and veterinary staff at Denver Zoo are working around the clock to care for emperor tamarin twins, orphaned after the death of their mother. Yana, the twins’ mother, died on July 30, just three weeks after giving birth from cancer.