Baby White-Cheeked Gibbon Along for the Ride

Gibbons are the trapeze artists of the primate world, spending their lives almost exclusively swinging in the tree tops. This tiny White-Cheeked Gibbon was born April 3rd at Chicago's Brookfield Zoo and still spends most of his time clinging tightly to mom, 21 year old Indah. 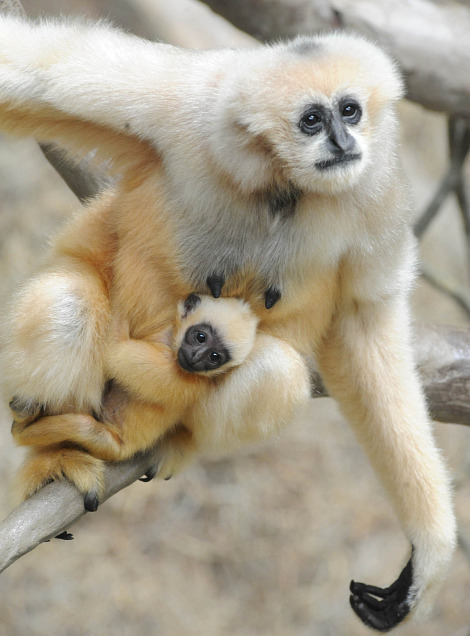 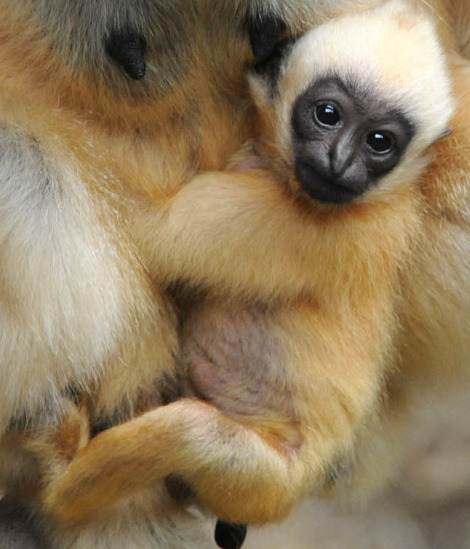 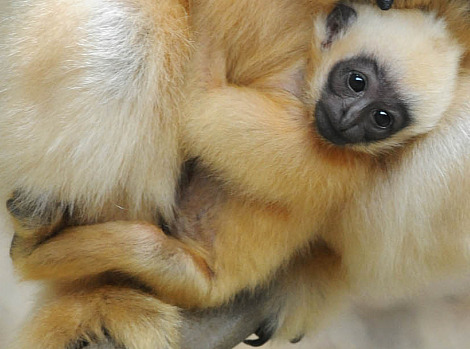 Brookfield, Ill.—A male white-cheeked gibbon born on April 3 has been a favorite of guests who visit Brookfield Zoo’s Tropic World. He can be seen with his mom, Indah, and dad, Benny, in the exhibit’s Asia section.

The infant’s name is Thani (pronounced ta-Nē), which means "gibbon" in Laotian, the official language of Laos, where the species is found.

The 4½ -month-old gibbon is becoming a little more independent and starting to brachiate (swinging from tree limb to tree limb using only his arms), the species' main mode of locomotion.

Like all white-cheeked gibbons, Thani was born with a blonde coat matching his mother’s, a form of camouflage. He will retain this light coloring until it begins to turn dusky when he is half a year old. By the time he reaches his first birthday, Thani will be sporting a black coat with light cheek patches, like his dad. He will retain this coloration for life. Females turn black and then back to blonde again, with a small patch of black on their crown, when they reach sexual maturity at around 6 to 8 years of age.

White-cheeked gibbon populations are decreasing due to poaching and habitat destruction, and they are critically endangered in their native habitat of Laos, Vietnam, and China—although there has been no documentation of them in China since 1990. Nearly 170 white-cheeked gibbons are managed in zoos worldwide, which is more than are thought to be remaining in the wild.

Indah, 21, and Benny, 24, have been together at Brookfield Zoo since August 1995. Indah was born at Minnesota Zoological Garden and Benny was born in Leipzig, Germany. They are managed as a breeding pair at Brookfield Zoo based on a recommendation by the Gibbon Species Survival Plan (SSP) of the Association of Zoos and Aquariums (AZA). An SSP is a cooperative conservation program for the long-term management of an endangered species’ breeding, health, and welfare in North American zoos. Jay Petersen, curator of mammals for the Chicago Zoological Society, is the Gibbon SSP coordinator.

Gibbons are almost exclusively arboreal, making their homes high in the canopy of trees. Of the 250 or so species of primates in the world, gibbons are among the best suited to life in the trees. They swing adeptly from limb to limb in what look like acrobatic displays. When they do descend to the ground or walk along a branch or vine, they walk on their legs while suspending their arms overhead to maintain balance—giving the appearance of walking an imaginary tightrope.

Baby White-Cheeked Gibbon Along for the Ride

Gibbons are the trapeze artists of the primate world, spending their lives almost exclusively swinging in the tree tops. This tiny White-Cheeked Gibbon was born April 3rd at Chicago's Brookfield Zoo and still spends most of his time clinging tightly to mom, 21 year old Indah.