For 13 years the Binder Park Zoo has been hoping for a baby giraffe. But within 48 hours between August 11th-12th, they welcomed two! The first baby was 6' tall and the second 5' 6", but what's six inches when you're almost two yards tall at birth? Enjoy these tall pictures of these tall "little" boys! 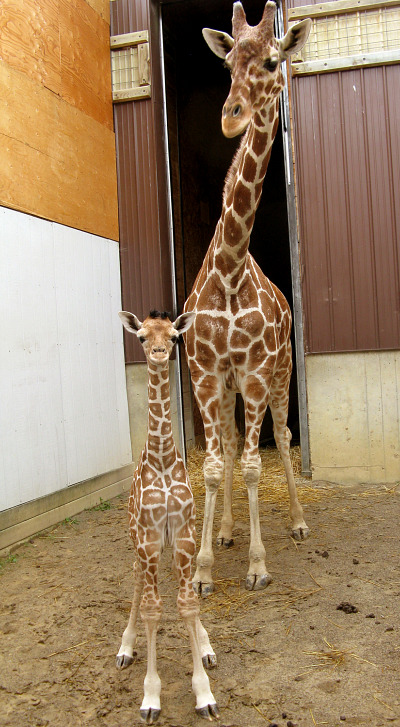 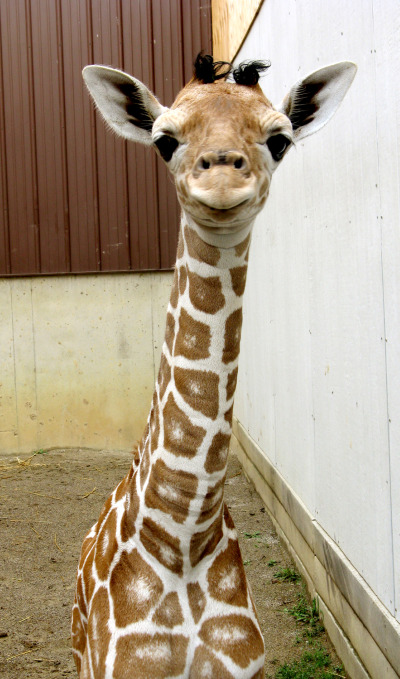 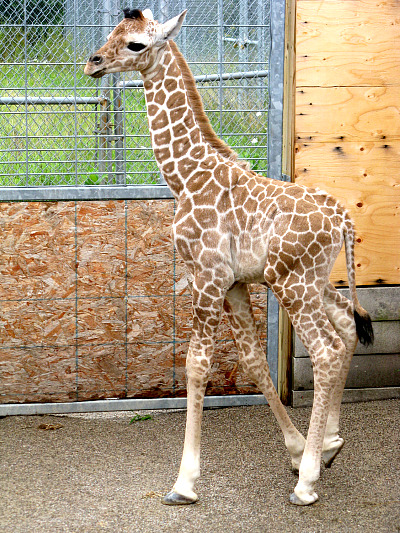 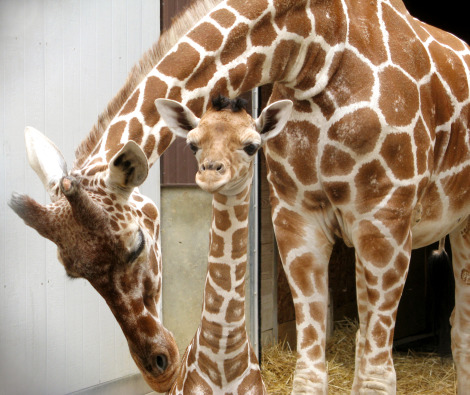 Baby Giraffe Born at Binder Park Zoo!
Battle Creek, MI August 19, 2009 –Binder Park Zoo is ecstatic to announce not one, but two reticulated giraffe births!  The bouncing baby boys were born within 48 hours of each other, the first on Tuesday, August 11th at 9:38 a.m. to mother Jasiri, age 14 years, and the second on Wednesday, August 12th at 5:48 p.m. to mother Cece, age 12.  Both calves were fathered by Gene, who is 12 years old.  These births are the first giraffe births at Binder Park Zoo and the first in Michigan in over 16 years!
“For 13 years we have hopefully looked forward to having baby giraffe,” remarks Greg Geise, Binder Park Zoo President and CEO. “Now all of a sudden we’ve realized our dream two times over and we are delighted!”
Baby number one weighed 137 lbs at birth and stood 6 feet tall.  He was standing and nursing within an hour of his birth.  All signs are pointing to the calf being healthy and Jasiri is doing well as a first time mother.  “It’s great to see Jasiri taking excellent care of her new baby,” says Andi Kornak, Curator of Collections.  “She’s a great first time mom.”
Baby number two weighed 116 lbs at birth and stood a bit shorter than his half brother at 5 feet 6 inches. “Cece was not displaying signs of proper care of the baby, and a decision was made to hand raise the calf,” says Kornak.  “It is not uncommon for giraffes to be hand raised in zoos.”
These are the first giraffe births at Binder Park Zoo and a perfect way to celebrate the tenth anniversary of Wild Africa, the Zoo’s award winning African exhibit.  “Hand feeding our giraffes is one of the opportunities that make this place special,” says Stacey Lawson, Chief Operating Officer.  “Having newcomers to the giraffe herd is going to offer yet another spectacular experience for families to enjoy at Binder Park Zoo.”
A timetable for the youngsters to appear on exhibit has not been set, but starting Friday, August 21, guests will be able to see a video of the birth and footage from their young lives at a special exhibit in Wild Africa courtesy of Best Buy.
“Before they go out on exhibit, we need to introduce them to the rest of the giraffe herd and then acclimate them to the exhibit,” says Jenny Barnett, Director of Wildlife.  “The safety of our animals comes first, though we want to get them out on savannah to share with our guests as soon as possible.”
The gestation period for giraffes is 14 to 15 months and calves can be up to 6 feet tall at birth.  Giraffe babies start off their lives with a 6-foot drop into the world, as their mothers give birth standing up.
These brand new additions increase the size of Binder Park Zoo’s reticulated giraffe herd to nine, which is one of the largest herds in the Midwest and the largest herd in Michigan. Currently there are 5 females and 4 males residing at Binder Park Zoo.
For more information about Binder Park Zoo and the new giraffe go to www.binderparkzoo.org.
About Binder Park Zoo
Over 6,500,000 people have visited Binder Park Zoo and an additional 550,000 have been served through outreach programs since it first opened in 1977.  It is located outside of Battle Creek, Michigan, on 433 acres of natural forests and wetlands.  In the past 30 years, the Zoo has grown to be one of the leading cultural attractions in the region.  It was created on the model of an entrepreneurial self-supporting nonprofit organization, and is managed by a zoological society board of directors to "nurture empathy, understanding, and conservation of nature."  In the last several years a conservation education center, a 40-acre natural wetlands exhibit, and the 50-acre Wild Africa exhibit and conservation carousel have been added to the original 80-acre zoo.  Binder Park Zoo serves over 65,000 people annually in 30 different types of formal education programs and is heavily involved in conservation of wildlife and natural habitats on five continents.  In cooperation with the Association of Zoos and Aquariums (AZA) and others, Binder Park Zoo is actively working to conserve a wide array of endangered species both at the Zoo and worldwide.

Double Giraffe Calves for the Binder Park Zoo
For 13 years the Binder Park Zoo has been hoping for a baby giraffe. But within 48 hours between August 11th-12th, they welcomed two! The first baby was 6' tall and the second 5' 6", but what's six inches when you're almost two yards tall at birth? Enjoy these tall pictures of these tall "little" boys!