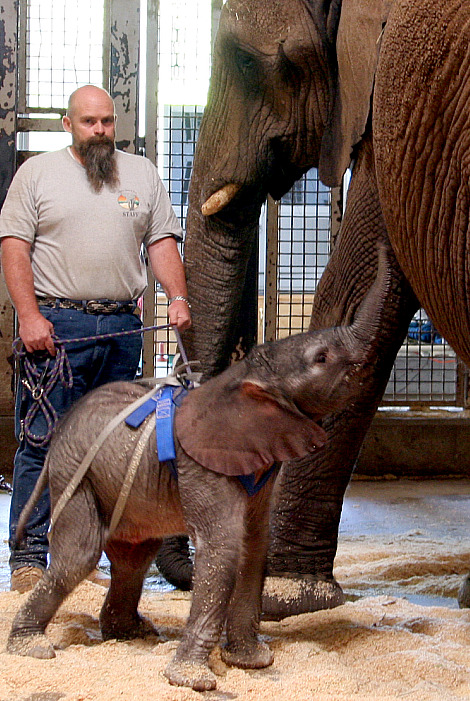 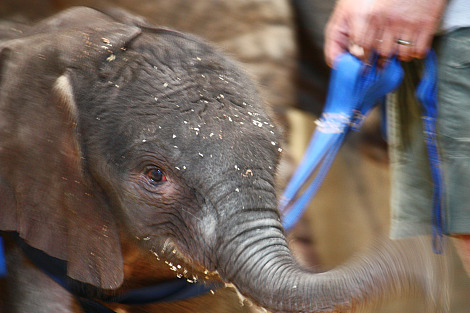 (Salt Lake City, UT) – After a 22-month pregnancy, Hogle Zoo African elephant Christie has finally given birth to a female calf August 10, 2009. This is the first baby born to 23-year-old Christie. Interview opportunities with key staff will be available today only at 3 pm. It is not yet determined when Christie and her calf will be on exhibit to the public.

The new elephant calf was born at 1:15 pm Monday August 10. “The birth was extremely fast.” Hogle Zoo Elephant Manager Doug Tomkinson says, “It went easy and well, but I can’t believe how fast it happened.” He adds, “This is something miraculous that has occurred. It has been years of hard work from the elephant staff and everyone else involved, and now the calf is finally here.” The calf weighed in at 251 pounds, is 36” tall and has a trunk that measures 15” in length.

Now that the elephant calf has been born, the staff is still working on helping mom and baby become bonded with each other. “Right now we’re working to get Christie and her calf comfortable around each other,” says Hogle Zoo Associate Director—Animal Health, Dr. Nancy Carpenter. “We are also closely watching the health of both elephants in these important first few days since delivery. The baby has begun nursing, which is a good sign for us.”

World-renowned elephant reproductive scientist Dr. Frank Goeritz, one of the team who performed Christie’s artificial insemination, was also on hand to assist with the delivery if any obstacles were encountered.

Christie became pregnant after three attempts at artificial insemination (AI) in 2006 and 2007. She was confirmed pregnant through an ultrasound performed on Saturday February 16th, 2008 by the team of German veterinary scientists from the Leibniz Institute for Zoo and Wildlife Research in Berlin. Though the first two AI attempts proved unsuccessful, the veterinary team was optimistic about October’s attempt. “Not only was the timing good, but Christie’s cooperative behavior was good, and she was very receptive.” said German scientist Dr. Frank Goeritz after the February ultrasound.

The Association of Zoos & Aquariums' Species Survival Plan for African elephants recommended Christie as a good candidate for breeding, in part due to her age. The AZA, of which Hogle Zoo is an accredited member, strives to maintain a sustainable population of elephants in North America. The renovations of Hogle Zoo’s Elephant Encounter in 2005 enabled participation in the artificial insemination program, furthering a commitment to elephant survival. "We are excited and proud to have our first baby African elephant born at Utah's Hogle Zoo. This success began with the community's support of a better home for our elephants at ‘Elephant Encounter,’” says Hogle Zoo Executive Director Craig Dinsmore. “From that milestone, our elephant and veterinary staff have dedicated themselves to helping "Christie" elephant have a healthy baby. This is a tremendous accomplishment for them and for Christie, and it demonstrates the value of improving the Zoo for all the animals."

Conservation, education and research work done at Hogle Zoo also plays a significant role in the survival of species in the wild. With successful elephant breeding of this nature, Hogle Zoo continues to live out its mission to nurture respect and appreciation for the natural world by providing diverse educational, recreational, and conservation opportunities that will benefit generations to come.