Taronga Zoo Celebrates the Birth of an Elephant Calf

This weekend at Australia's Taronga Zoo, officials announced the anticipated birth of an Asian elephant calf. Mother and child are doing well. The newborn was even able to soak up some rays outside, just a day after his birth. 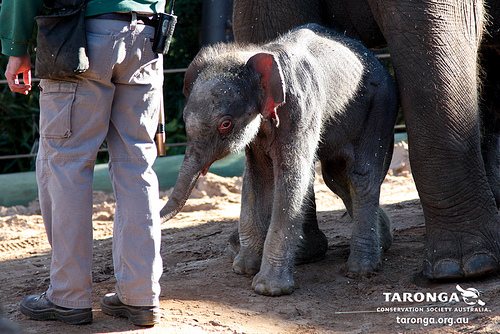 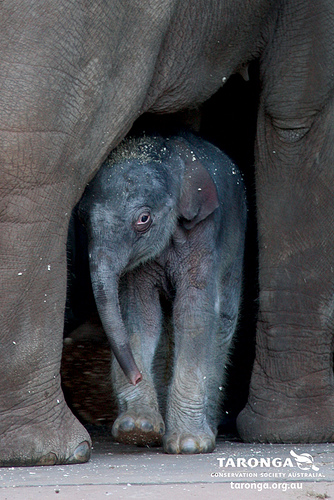 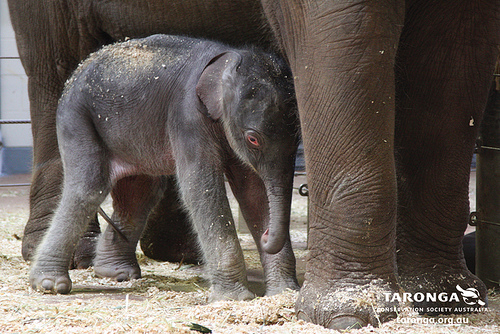 The Zoo's Director, Guy Cooper, said: "With introductions to the other female Asian Elephants in the herd going well, our Elephant Team was keen to give the calf's mother a chance to stretch her legs and give the young calf its first experience outside."

"Our Elephant Manager, Gary Miller, is very pleased with progress in introducing the other females, he decided to give Thong Dee the opportunity to talk the youngster for a walk in the quiet, sheltered lower paddock of the exhibit with Tang Mo, which was the first adult female introduced to the calf."

"This will also continue the carefully managed exercise program for our elephants in the Australian Conservation Breeding Program which ensured Thong Dee was fit and ready for pregnancy and birth."

The introduction of the female elephant Tang Mo to the new mother and calf today went very well with Tang Mo showing great interest in the youngster, demonstrating classic ‘aunty' behaviour and helping the mother, Thong Dee, care for the calf.

Mr Cooper said the global knowledge bank on elephant breeding that was available to Taronga and the depth of experience of Taronga's keeping staff and veterinarians had contributed much to the successful birth and the introductions.

Thong Dee and her calf are unlikely to be visible in the exhibit for some days yet while the post-birth process of bonding with the other females continues and the calf gets stronger.

The young male calf's progress has already been very reassuring, getting quickly to its feet after birth and suckling within three hours, ensuring its access to the important first milk known as colostrum from its mother.

It will be some time before an exact weight of the calf can be determined, but calves typically weigh between 80 and 120 kg.

The Zoo will ask the community to choose a name for Australia's first-ever elephant calf through an online competition on the Zoo's website at www.taronga.org.au/littlethings.

The mother, Thong Dee (Golden) used to be a street elephant in Bangkok. When Taronga keepers first met her, she was very focused on food and did not socialise much with the rest of group. Now that she knows there will always be enough food, she's emerged as a calm, well- balanced elephant. Thong Dee has become the mother of first elephant calf born in Australasia, born on July 4, at about 3 am.

Asian Elephants are found in a range of habitat areas in the South East Asian region. They inhabit areas of dense forest to dryer grassed plains.

The Asian Elephant spends most of its day searching for food. Their diet consists of bamboo, palms, fruit and other forest plants.

Elephants have the longest pregnancy of all mammals with a gestation period of 22 months. A newborn baby may weigh between 90kg and 110kg at birth.

The calf suckles milk from its mother, generally taking around 12 litres each day. The calf initially needs to learn how to suckle and baby elephants are usually dependent on mother's milk for up to three years, although they can be weaned at two years of age.

By the time a calf is nine months old, 40 per cent of its diet is vegetation. The calf learns how and what to eat by watching the older elephants.

It takes time for a calf to acquire trunk coordination. At first it may only be able to wave it around in the air, suck on it or trip over it, however within a week the calf has usually gained enough control to try picking up and carrying small objects and food.

The male (bull) Asian Elephants develop large, tusks similar to the African Elephant bulls. The females however generally only have smaller tushes, that don't grow much past the upper lip.

They may live to the age of 60, usually less in the wild.

The population of Asian Elephants is in very serious decline, since competition with civilisation over housing and cultivation has led to loss of habitat. Sadly, in some areas land mines left over from various wars are also claiming the lives of elephants.

However the most pressing problem faced by wild Asian Elephants is loss of habitat. In Thailand alone, the area of rainforest has diminished from 80% coverage (prior to WW2) to only 15% today. Asian Elephants are endangered with as few as 34,000 remaining across 13 countries.

Taronga and partner zoos have established a conservation breeding program for the Asian elephants to create a self sustaining breeding herd. As with any conservation breeding program, the long-term aims are to preserve the genetic diversity of an endangered species within zoos as insurance populations, should they be required if wild populations were to collapse in the future.

Taronga Zoo Celebrates the Birth of an Elephant Calf

This weekend at Australia's Taronga Zoo, officials announced the anticipated birth of an Asian elephant calf. Mother and child are doing well. The newborn was even able to soak up some rays outside, just a day after his birth.