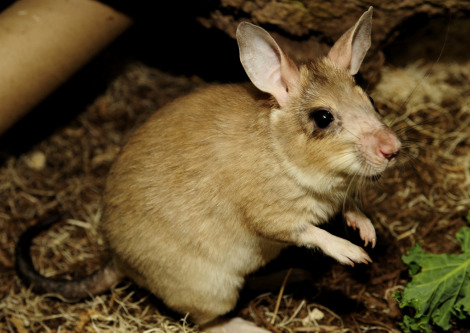 Jump on over and see this endangered Malagasy Mammal Before he Grows Up!

Brooklyn, N.Y. – This as yet unsexed pup was born in April of this year. Dad Armand and mom Vonjy are keeping a close watch on the infant.

The Mom and Dad arrived at the Prospect Park Zoo in early January. They are the first residents of the nocturnal wing in the Animal Adaptations exhibit. When the pair gave birth, they received complete privacy by covering the exhibit front and restricting human access to the holding area. Each are first time parents.

These mammals are very endearing. The North American population is quite small and this joint acquisition by Prospect and Bronx Zoos significantly increases the North American population and raises the profile of this endangered Madagascar mammal. The low birth rate, a single birth once a year, accompanied by predation by feral dogs, adds to the stresses on this species in the wild.

The Wildlife Conservation Society (WCS) has worked to save Madagascar’s biodiversity for nearly 20 years. Through its projects and partnerships, WCS is focused on protecting and managing a diversity of wild places in Madagascar, including the country’s largest remaining tract of rainforest, a quarter of its coastal forests, and its vast coral reefs – the third largest coral reef system in the world.

Two of WCS’s most notable achievements in Madagascar have been the design, establishment, and management of Masoala National Park and the Makira Forest Protected Area – Madagascar’s two largest, contiguous protected areas.  Last June, WCS and the Government of Madagascar announced a landmark agreement, where the government will offer for sale more than nine million tons of carbon offsets to help safeguard the Makira Forest.  Proceeds from sales will protect the wildlife-rich Makira, contribute to the economic well-being of people living around the forest, and help fight global climate change.