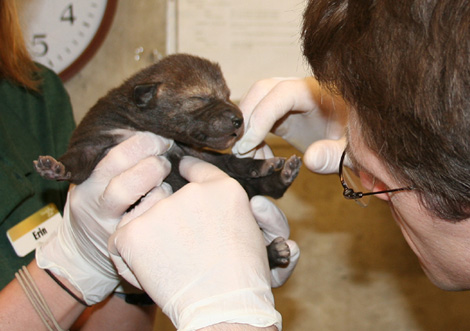 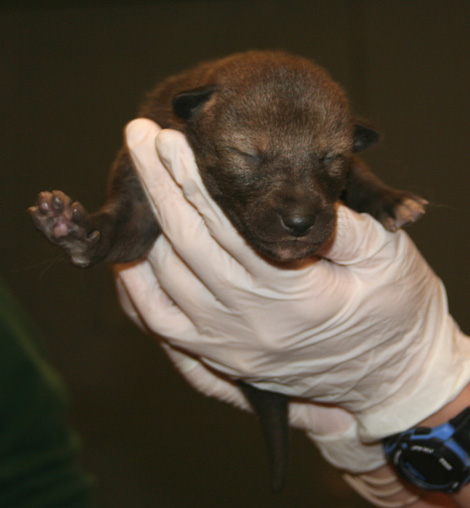 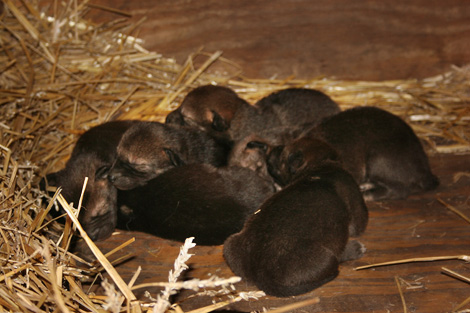 These are first wolf pups born at Lincoln Park Zoo to be released in the wild.

Four Critically Endangered Red Wolf Pups Slated for Release into the Wild Today
One-week-old pups to be fostered by wild adult wolves through the Red Wolf Recovery Program
Chicago, IL – Six critically endangered red wolf pups were born at Lincoln Park Zoo on April 24. Today (May 1) four of those youngsters are headed to North Carolina where they will be released into the wild as part of the Red Wolf Recovery Program. The pups will be inserted into dens of adult wild wolves that will serve as foster parents. These pups are the first wolves from Lincoln Park Zoo to be released to the wild.
The Red Wolf Recovery Program is a cooperative conservation effort between the Association of Zoos and Aquariums’ Red Wolf Species Survival Plan and the United States Fish & Wildlife Service.
The red wolf fostering strategy – placing red wolf pups born through a managed breeding program into wild dens – has been successfully performed with multiple litters over the past decade.
According to Arthur Beyer, red wolf field coordinator for the US Fish & Wildlife Service, “Wild mothers have readily accepted the pups as long as the pups are placed in the den when they are this young. The field team has identified two or three denning pairs where Lincoln Park Zoo pups are an ideal fit. ”
Early this morning the four pups were pulled from their zoo den, weighed and examined by a zoo veterinarian before being placed in an animal carrier and flown to North Carolina with zoo staff. Later today they will be placed in a single den, or split among a couple different wild dens.
“Once released, we typically leave the animals alone and will check back in about a year,” explained Will Waddell, Red Wolf Species Survival Plan coordinator. “This fostering strategy has a very high success rate; the pups are placed with proven mothers.”
“It’s important to bolster this critically endangered species population, and Lincoln Park Zoo is proud to play a part in the Red Wolf Recovery Program,” said Megan Ross, Ph.D., Lincoln Park Zoo general curator.
The red wolf is one of the world’s most endangered wild canids. Once common throughout the southeastern United States, red wolf populations were decimated by the 1960s due to intensive predator control programs and loss of habitat. After being declared an endangered species in 1973, efforts were made to round up as many wild red wolves as possible. Of the 17 remaining wolves captured by biologists, 14 became the founders of a successful managed-breeding program. Consequently, the US Fish and Wildlife Service declared red wolves extinct in the wild in 1980.
By 1987, enough red wolves were bred in the Red Wolf Species Survival Plan to begin a restoration program on the Alligator River National Wildlife Refuge in northeastern North Carolina. Since then the experimental population area has expanded to include three national wildlife refuges, Department of Defense and state-owned lands and private property, totaling 1.7 million acres. The main threats to the wolf’s survival remain loss of habitat due to development and persecution by humans.

These are first wolf pups born at Lincoln Park Zoo to be released in the wild.