The Antwerp Zoo, Planckendael, got a double dose of baby giraffe earlier this month as two new giraffe babies were born to different Moms.  The births, which occurred within a day of each other, are the first of their kind for Planckendael. 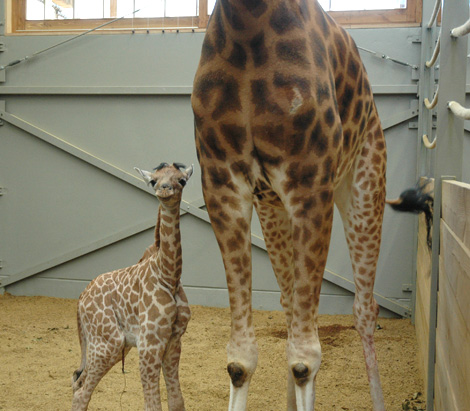 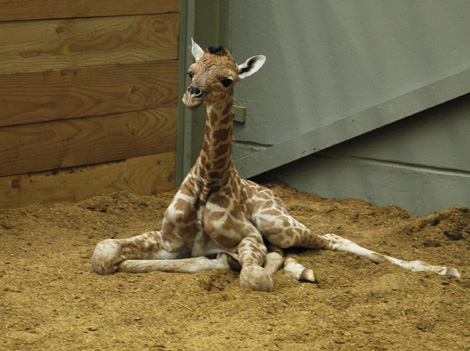 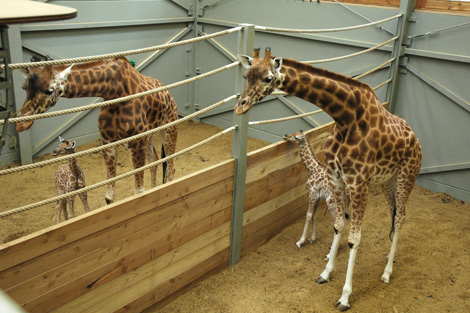 It is not even spring yet, but the brand new savannah in Planckendael has got a new inhabitant: the very first baby giraffe in the history of Planckendael is born. The new mom cherishes her first calf in the warm stable which everyone can see from the lodge. Father Baridi is looking at them with a curious eye from the neighbouring stable. The birth is a real record performance because the little animal – a male - fell from a height of 2 meters and stood quickly on its delicate feet. The birth is a first for both Planckendael and the giraffe mom.

These giraffes are an endangered subspecies and strongly resemble the critically endangered giraffes from Niger, of which only about 200 are still alive. Planckendael is participating in the European breeding programme but is also helping the giraffes ‘in situ’ (Niger in this case) by collecting money for the building of a well for the local population. As a result, the competition for water between the people and the animals disappears, which improves the social and economic situation of the population and ensures that the giraffe brings “happiness” instead of being a rival.

The gestation of giraffes takes 14 to 15 months. Males can reach a height of up to 5 meters (16 feet), females stretch their necks up to a height of 4.30 meters (14 feet). They are the tallest animals in the world but still have only 7 cervical vertebrae, just like mice. Never stick out your tongue to a giraffe, because his is no less than 45 cm (18 inch) long. But we have not seen the last of this beautiful story yet, because Barbie too is expecting her first baby as well and it could be any moment now.

Once it gets warmer, this very young attention getter will be gambolling outside, on the savannah with the Cape eland, the impala and the funny helmeted Guineafowl. On the adventure track surrounding the savannah, there are plenty of things to enjoy.

The amazing giraffe story of yesterday has a quick, very special turn of events! Only yesterday we presented mom Diamant´s young to the press with great attention. The other pregnant ‘little mother’, Barbie, has not waited the expected two weeks and tonight she introduced her sturdy calf to the world! The warm stable forms an endearing background for this rapid family expansion. The second baby giraffe is even slimmer, even larger than its predecessor, and is standing right away firmly on its feet. The gender is yet to be determined.

Together with stud Baridi, grandma Maji and two aunts Sarah and Diamant with her brand new young the giraffe family now counts seven members in Planckendael. They can be seen in all their glory in the inner stable through the lookout windows in the lodge at the park’s savannah.

These giraffes are an endangered subspecies and are very similar to the critically endangered giraffes in Niger, of which only 200 animals survive. Planckendael is taking part of the European breeding programme, but also supports the giraffes ‘in-situ’ (Niger in this case) by collecting money for the construction of a water well for the local community. This will diminish the battle for water between human and animal and improves the social state as well as economic conditions of the locals and thus the giraffe will bring them ‘happiness’ instead of being a competitor.

At www.planckendael.be and www.ketnet.be you can find several beautiful names for our two youngsters, which are selected by the caretakers. From now on the public can vote for the name of their preference.

The Antwerp Zoo, Planckendael, got a double dose of baby giraffe earlier this month as two new giraffe babies were born to different Moms.  The births, which occurred within a day of each other, are the first of their kind for Planckendael.