Last month, the Denver Zoo welcomed a brand new bundle of joy.  This time, it's a Golden Lion Tamarin. The newborn weighed less than 100 grams, about as much as an average kiwi fruit. 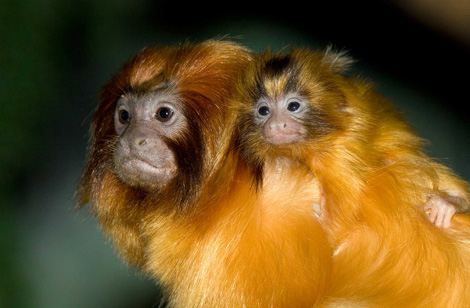 Cautious Mom's not sure about this photo op... 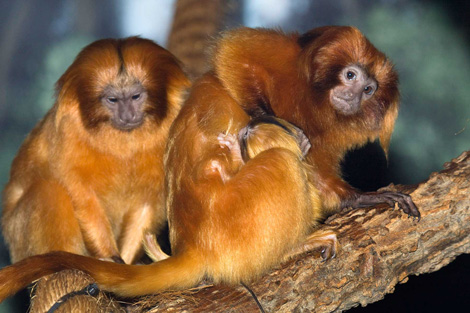 Denver, CO (February 26, 2009) – Denver Zoo has struck gold again as it is celebrating the birth of a new endangered golden lion tamarin that came into the world on February 6. Mother, Rosie, and father, Siamo, have proven to be excellent parents to their two previous sets of twins, and again are taking excellent care of the new arrival! Guests can see the entire family in the Emerald Forest exhibit in Denver Zoo’s Primate Panorama.

The newborn weighs less than 100 grams, about as much as an average kiwi fruit. The sex of the infant has not yet been determined, but zookeepers say that the baby appears to be strong and healthy. As is common for this species, every member of the family will take turns carrying the infant over the next few weeks, even the older siblings. By watching their parents care for the infants and participating in their care, Alex, Annie, Beau and Belle are learning valuable parenting skills that will hopefully be able to use themselves someday.

Golden lion tamarins are native to the coastal forests of Brazil and are classified as endangered. Most of the wild population is confined to the Reserva Biologica de Poco das Antas, a protected area in Rio de Janeiro. Only two percent of this species’ original range remains and the existing habitat has been severely fragmented by logging and agriculture, which has led to isolated populations and inbreeding.

By 1980 there were more golden lion tamarins in captivity than in the wild, so re-introduction of captive-bred animals into Brazil began in 1984. Golden lion tamarins were classified as critically endangered until 2000, when the efforts of the re-introduction program began to show an increased population.  The species has now been downgraded to endangered as a result of nearly 30 years of conservation efforts. More than 150 captive bred golden lion tamarins are now living in the wild, but the species remains in peril, due primarily to habitat destruction.

As their name suggests, these primates bare some resemblance to lions, with their golden coats, long tails and the longer, darker hair around the face creating a mane.  Despite some similarities in appearance these primates are much smaller than the king of the jungle, weighing on average only between 400 – 800 grams (0.88 – 1.76 pounds). Gestation lasts for 126-130 days, usually ending in twin births. The young tamarins are weaned after just 90 days.

Last month, the Denver Zoo welcomed a brand new bundle of joy.  This time, it's a Golden Lion Tamarin. The newborn weighed less than 100 grams, about as much as an average kiwi fruit.

Cautious Mom's not sure about this photo op...