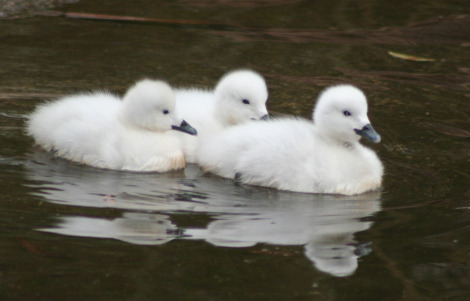 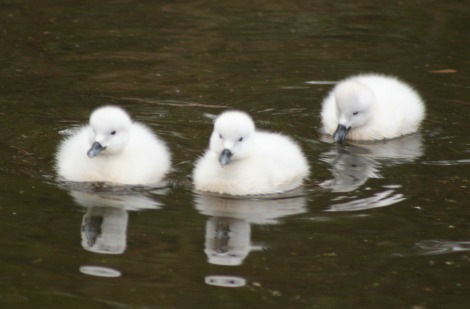 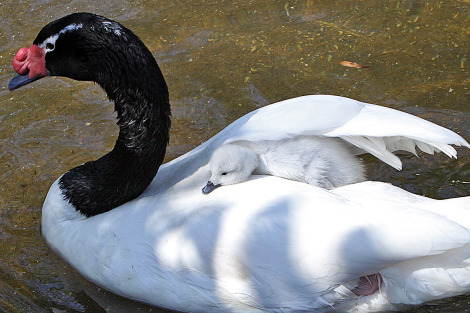 [Columbia, SC] – Riverbanks Zoo and Garden is proud to announce the birth of three black-necked swan cygnets (baby swans). On Friday, March 6, the parents carefully guarded the nest as the eggs they had tended to for nearly 36 days began to hatch.

The cygnets only spent about a day in the nest. By Saturday they ventured into the water with their parents in search of food. Unlike birds that nest in trees, the offspring of waterfowl are known as “precocial” species, which means they hatch with feathers, can see and can feed themselves.

The fluffy white chicks are currently on exhibit with their parents in the pond at Riverbanks’ Bird Garden (opposite the Bird Conservation Center). Guests will most likely see them swimming around the exhibit or catching a ride on the back of one of their parents; you may have to look closely though, sometimes they tuck under their parents’ wings for protection.

This is the first set of offspring for the pair. The male, 9, came to Riverbanks in 2000 from the Santa Ana Zoo and the female, 5, came in 2004 from the Alexandria Zoo. Both animals are considered young parents, as swans can live into their 40s.

Last year was the pair’s first attempt at creating a nest, and they had very little success. The nest lacked the proper structure and the eggs rolled from the nest.

“Each year birds become better nest-makers and better parents,” said Martin Vince, curator of birds at Riverbanks Zoo and Garden. “They quickly learn from their mistakes; and that is the case here with our black-necked swans. Last year was a dry run for a very young pair. This year they did much better, and the result was a successful breeding and hatching.”

The pair began nest-building in early January. The swans start by sitting on the ground and pulling organic material toward their bodies to build a nest up around them. The result is a conical-shaped shell. The birds then line it with feathers plucked from their own body to serve as insulation for the eggs when the parents are not on the nest.

The cygnets, which are currently covered in down feathers, will begin growing juvenile feathers in two months.

“Their first plumage will be a non-descript color all over their bodies,” said Vince. “After their second molt, their adult plumage will grow in, including the black feathers on the neck. That will take about a year.”

The black-necked swan is native to South America and the Falkland Islands and is the largest waterfowl found in South America. It is one of two species of swan found in the southern hemisphere; the other is the coscoroba swan.

The chicks will remain at Riverbanks until the fall when they will be transferred to other zoos.