At only three weeks old, Conchita, a tiny critically endangered monkey born at ZSL London Zoo is already a beacon of hope for her species. 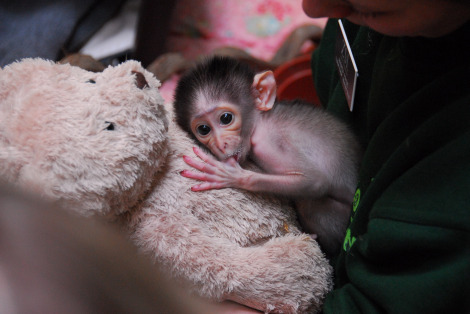 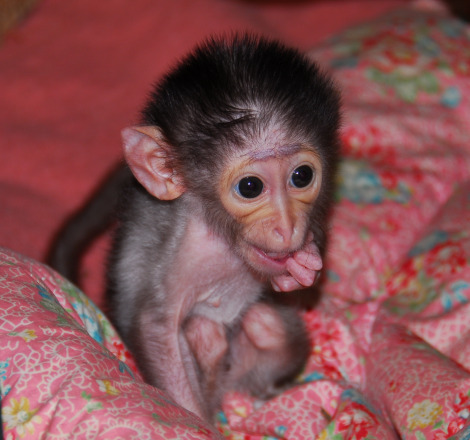 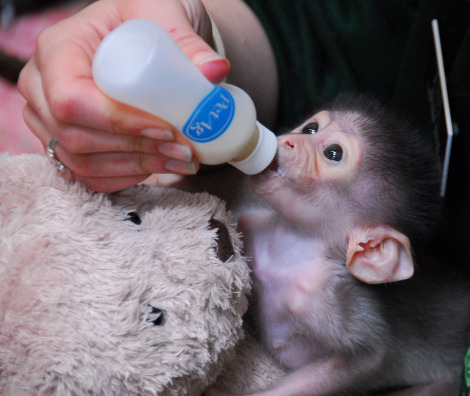 Continue reading to learn more about Conchita and her species' plight.

Because complications meant she had to undergo an emergency caesarean, Conchita’s mum Leonie, seven, was too ill to bond with her in the vital first few days. Conchita is such an important monkey that keepers stepped in to rear her themselves – with a little help from a teddy bear!

Zookeeper Andrea Payne, who has been affectionately dubbed “mummy mangabey” around the Zoo, has been caring for Conchita day and night. That involves twice hourly bottle feeds, regular weigh-ins and plenty of stimulating play to strengthen her limbs – not to mention hours of searching London’s toyshops to find a teddy bear with just the right qualities to play surrogate mum.

Andrea will be visiting West African Primate Conservation Action (WAPCA) in November to share information about her findings researching white-naped mangabeys and studying the group at ZSL London Zoo, and see the work being done to save the species in the wild. ZSL gives technical advice and donations each year to help WAPCA in its mission to protect these captivating monkeys. What ZSL London Zoo learns rearing Conchita and introducing her to the adult group will provide the global Zoo community with vital help understanding these monkeys and aid the in-situ conservation effort.

The Zoo’s mangabey group arrived as part of the award-winning Gorilla Kingdom exhibit, which tells the story of threatened wildlife in Africa.

The dire situation for her wild cousins hasn’t fazed Conchita one bit. Thoroughly enjoying all the attention, she and Bear have become firm friends and have to be parted for vital weighing and health checks with the help of a tiny security blanket. Keepers plan to fully introduce her to her mum Leonie, dad Lucky, and housemate Bella within a month.

Curator of mammals Malcolm Fitzpatrick said: “White-naped mangabeys are one of the most endangered species of primate in the world. Any future they have in the wild lies with conservationists being able to learn more about them, which is why the captive populations are so important. Conchita’s birth is vitally important and we had to make sure she survived.

At only three weeks old, Conchita, a tiny critically endangered monkey born at ZSL London Zoo is already a beacon of hope for her species.

Continue reading to learn more about Conchita and her species' plight.