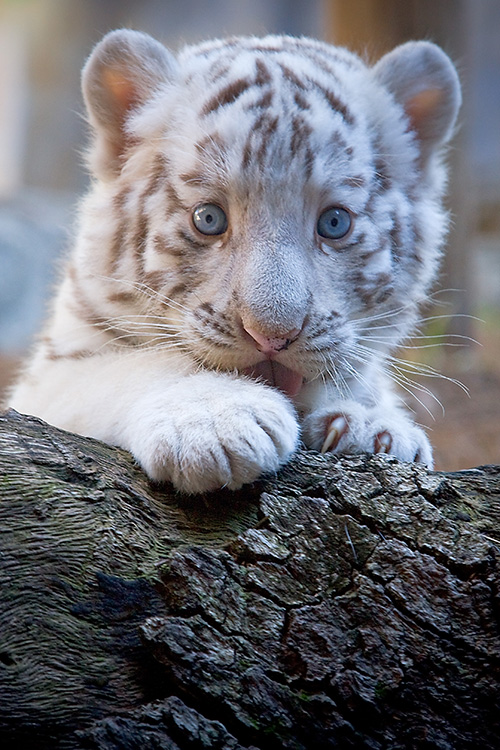 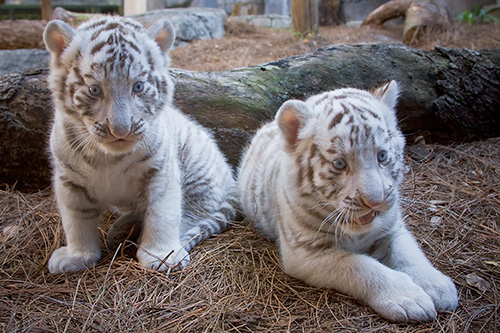 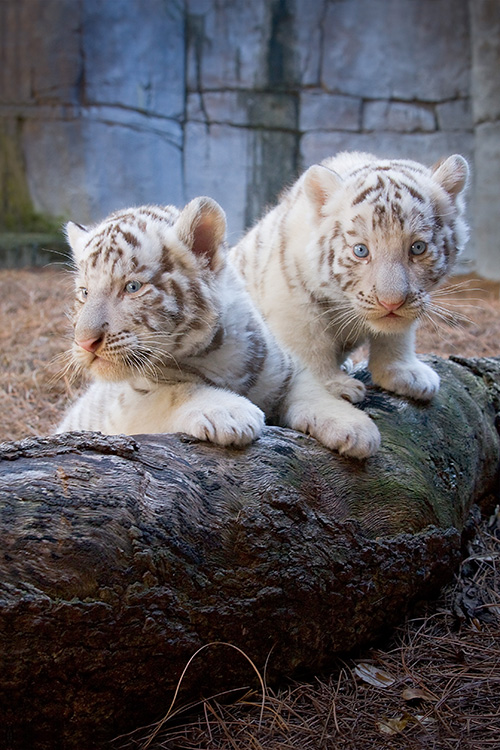 A pair of seven-week-old white tiger cubs born at Tampa’s Lowry Park Zoo are beginning to explore their exhibit with mother, “Nikki,” in the zoo’s Asian Gardens area.  The family is doing well, with mother and cubs spending most of their first weeks together off exhibit for their safety and privacy in bonding.  As the cubs have grown and matured, zoo staff has begun the process of offering access to the outdoor yard for short intervals as the family establishes a new pattern of behavior.

This is the second litter for experienced mom Nikki while living at Tampa’s Lowry Park Zoo.  The newest cubs, a boy and a girl, were born the morning of October 4 weighing about 3.6 and 2.5 pounds respectively on their first veterinary check-up.  The zoo’s adult white male tiger, “Yala,” is Nikki’s mate and sired the new cubs.

The zoo’s Asia keepers have monitored mother and the newborn cubs closely since birth, and report that Nikki is a very attentive is nursing routinely.  The cubs are now well-bonded with mom and are moving about with improving motor skills.  Although the mother and father are an established couple, the adult male will be separated for the time being for the safety of the cubs.

The gestation period for tigers is three to four months, or approximately 110 days.  The average litter is two or three cubs which weigh about two pounds at birth.  Cubs are born with their eyes shut and helpless, relying entirely on their mother for the first three months and nursing for many more.  The survival of the cubs will be dependent upon the mother’s ability to care and nurture them, the cubs’ ability to fight any infections association with normal birth, and the success of weaning and independence.

White tigers originate from Bengal tigers.  They are not albinos and they are not a separate subspecies of tiger.  They have blue eyes, a pink nose and white fur covered with chocolate-colored stripes.  White tigers are born to tigers that carry the unusual gene needed for white coloring.  Wild white tigers are very rare, because their white coats provide poor camouflage, making them easily spotted by prey.

Public viewing of the Zoo’s newest white wonders will be limited to morning initially as the cubs continue to grow and mature.  Mother and cubs will rotate on exhibit with their white tiger father, Yala.