Warty Piglets at the Brevard Zoo

The Brevard Zoo welcomed a tiny Visayan warty piglet on Sept. 17th! These tiny hogs are critically endangered in their native Phillipines. 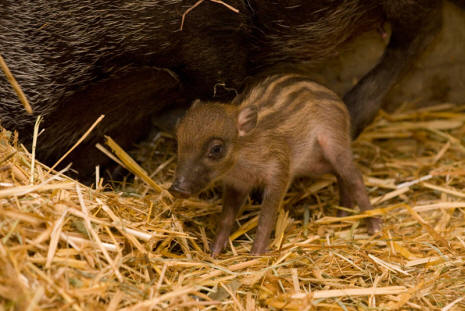 Mom is a looker!

The Brevard Zoo's animal population has increased by one after a Visayan warty piglet was born at the zoo last month.

The tiny, brown-and-white striped female, which was born on Sept. 17, weighed less than a pound at birth and is 8 inches long and nearly 2 pounds now, Local 6 News partner Florida Today reported.

The zoo received its four adult Visayan warty pigs in June. There are three females and one male, Pandan, who had the baby with mom Makina. It's Makina's first piglet.

In a statement from Brevard Zoo, animal programs director Michelle Smurl said, "The keepers report that she is glued to the mother, and they often vocalize to each other with grunts, squeaks, and other pig-like noises. One of the keepers commented that she resembles a little melon with stripes."

The public won't be able to see the piglet until later in the month, zoo officials said.

Visayan warty pigs are native to six islands in the Philippines but are extinct on four of them.

As a Father's Day promotion, the Brevard Zoo offered free admission to anyone sporting a mohawk -- real or fake -- resembling the Visayan warty pig's mane. Unlike other wild pig species, male Visayan warty pigs sport a lush mane that is often more than 1 foot long and stands upright when the animals are excited or agitated.

Warty Piglets at the Brevard Zoo

The Brevard Zoo welcomed a tiny Visayan warty piglet on Sept. 17th! These tiny hogs are critically endangered in their native Phillipines.

Mom is a looker!