Keepers at the National Aquarium were proud to to welcome their first baby sloth in early September. The world’s slowest mammal, sloths spend their entire lives living in trees. 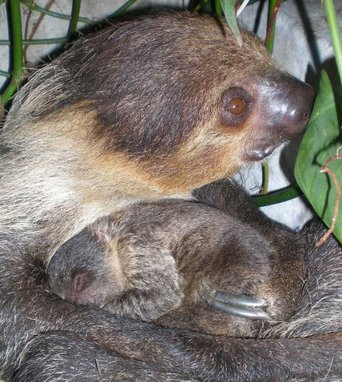 Did you know: Baby sloths are referred to by scientists as "baby sloths!"

THE NATIONAL AQUARIUM WELCOMES A NEW BABY TO THE UPLAND TROPICAL RAIN FOREST Two-toed sloth is first born at the Aquarium (September 24, 2008 – Baltimore) The National Aquarium is proud to welcome a new addition to the Upland Tropical Rain Forest – a two-toed sloth born in early September. The baby is the first sloth born at the National Aquarium. During daily routine checkups aquarists in the Upland Tropical Rain Forest found that Rose, one of three adult sloths living in the exhibit, had given birth to an infant. The baby was born fully haired and with its trademark claws. Upon initial observations the baby sloth seems strong and healthy, and is actively clinging and crawling about on its mom. Since birth, the baby sloth has been attached to the mother. Aquarists suspect it will remain that way for the first several weeks of life. As time goes on, the young sloth will begin exploring its immediate surroundings and eating solid foods. Sloths can remain dependant on their mothers for up to one year. The animal care staff will respect that natural process and allow the Rose to care for her baby. Two-toed sloths are commonly found in Central and South America’s rain forests. The world’s slowest mammal, they spend their entire lives living in trees. They are nocturnal by nature, fairly active at night while spending most of the day sleeping. Adult sloths are typically the size of a small dog. Sloths have been an ongoing part of animal collection at the National Aquarium. The three adult sloths currently living in the Rain Forest were acquired in May 2007 from a private captive breeder in South Florida. The birth of a baby sloth was certainly ‘hoped for’ by animal care staff, but it was not a planned event. “Despite the fact that the two-toed sloth is a fairly common animal, many of its most basic life history facts are still a mystery due to the fact that actual mating is rarely observed,” commented Ken Howell, Curator of Rain Forest Exhibits at the National Aquarium. “We hope that the birth of this baby will increase awareness and interest in this group of most unusual mammals.” Rose and her new infant are free roaming in the Upland Tropical Rain Forest exhibit, and while Aquarium staff members cannot guarantee they will be visible during everyone’s visit, there is a good chance that one of the three adult sloths will be able to be seen by visitors. A video of the baby sloth is available on the Aquarium’s blog, www.aqua.org/blog.

Keepers at the National Aquarium were proud to to welcome their first baby sloth in early September. The world’s slowest mammal, sloths spend their entire lives living in trees.

Did you know: Baby sloths are referred to by scientists as "baby sloths!"