On June 16th, 2008, the Binder Park Zoo, in Battle Creek Michigan welcomed the birth of this adorable little furball. These pictures were taken at 15 days of age. 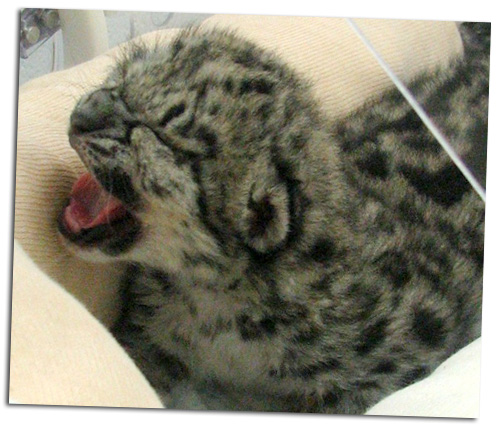 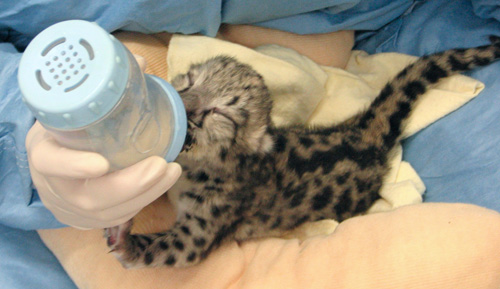 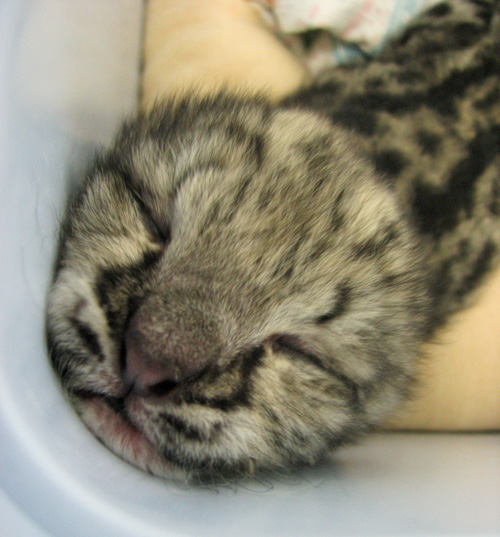 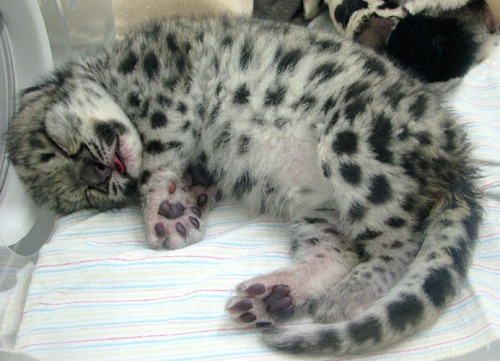 BATTLE CREEK MI, July 2, 2008 –On June 16, 2008 Binder Park Zoo in Battle Creek, Michigan welcomed a 1 lb, 10 ½ inch baby female snow leopard cub. With this birth comes great success in the conservation of this species as their populations have diminished to less than 7,000 animals in the wild. Due to the scarce population, the snow leopard is listed as endangered by the World Conservation Union/IUCN red list and Convention on International Trade in Endangered Species since 1974.

The new baby, now with her eyes open, is 15 days old, weighs almost 4lbs, and is 19 inches long from the top of her head to the tip of her tail. She is doing very well and has quadrupled in weight, and doubled in length since birth. Guests can see the new baby through a glass partition at the Zoo nursery in the animal hospital just past the International Depot. Her parents are now situated in the new Smith Snow Leopard Encounter exhibit on the zoo grounds. The community is invited to help name the new baby by making an online donation in support of snow leopard conservation. Participants can choose from Luli, meaning dewy jasmine, Shanti, meaning peace, Jalala, meaning lotus, Rashmi meaning ray of light, or Bhadra meaning gentle one. The name with the largest in donations on July 16 will be the baby’s new name.

At birth, the baby cub spent approximately 2 hours with her mother (Lotus age 11), when she was removed for hand rearing by zoo staff. The decision was made to remove the baby because the mother wasn’t showing signs of adequate maternal behavior. Typically, animals in captivity are given the opportunity to raise their offspring without intervention but in this situation zoo officials felt it was in the cub’s best interest to be removed from her mother for a better chance of survival. She was able to receive the necessary colostrum (first milk with antibodies in it) from her mother and was then put on a combination of kitten and puppy milk replacers to replicate natural snow leopard milk. She is currently being fed by zoo staff by bottle every four hours. She has a stuffed surrogate snow leopard mother to curl up with while she sleeps which is designed to give the cub a feeling of comfort and security. By four months of age, she should be weaned from the bottle and eating solid foods.

“We feel it’s very important to limit the amount of human contact that the new cub receives to lessen her imprinting on humans,” said Jenny Barnett Director of Wildlife Conservation at Binder Park Zoo. “Our purpose in having snow leopards at the Zoo is to educate our guests about conservation of this species but also to breed and maintain a genetically diverse group of animals that retain as many of their wild traits and instincts as possible. The possibility of future release back into the wild is unlikely but something we do not want to rule out. An animal that grows up to depend on humans can never be reintroduced back into the wild.”

The birth of this cub follows another significant addition of a new snow leopard exhibit recently open earlier this year. The Smith Snow Leopard Encounter was made possible through a generous donation from Jeff Smith, and his brother Doug Smith as a way to honor their parents Wendell (Pete) and Leona Smith. The generosity of these individuals has provided the means to build an exhibit four times the size of the previous snow leopard exhibit. Brad Rutherford, Executive Director of the International Snow Leopard Trust stated at the dedication of the exhibit, “You are running an amazing zoo and we feel very lucky to be one of your conservation partners.”

“After years of working and hoping it is great that we have been successful in having a viable snow leopard birth. The cub is incredibly cute but is indeed not a pet. Only limited zoo staff that are trained and have passed rigorous screening are allowed to even be in the same room as the cub. This birth, along with the wonderful new exhibit really does make this ‘The Year of the Snow Leopard’ at Binder Park Zoo” said Greg Geise, CEO.

Due to the many threats that snow leopards face there are only 3,500 to 7,000 still left in the wild and 600 to 700 snow leopards held in captivity. Some of these threats include, poaching, loss of prey and habitat, and the lack of protection, awareness and support. The snow leopard inhabits one of the harshest environments on earth – the mountainous regions of central Asia. The snow leopard is currently fighting for its existence in China, Mongolia, Nepal, India, Afghanistan, Russia, Tajikistan and Pakistan. Currently China has the largest number with approximately 2,000 snow leopards.

There are a number of efforts underway to help save the snow leopard in which Binder Park Zoo participates including the International Snow Leopard Trust (ISLT) and the Association of Zoos and Aquariums (AZA) Species Survival Plan (SSP). The AZA has taken action by bringing the plight of this animal to public attention though the work of the Snow Leopard SSP. The SSP works to keep a large, genetically viable, healthy group of snow leopards in zoos and preserves throughout the United States and the world. If snow leopards become extinct in the wild, the hope is that one day captive-bred animals may be able to return to the wild if suitable habitat is ever restored. The SSP also works to preserve native habitats and educate local peoples about the snow leopard and have them take a lead role in the conservation effort.

The International Snow Leopard Trust (ISLT) has a number of projects in Mongolia and India and is conducting research in many other areas to determine the population of the leopard. In Mongolia, rural villagers are given the opportunity to increase their income in return for the protection of snow leopards. Through Snow Leopard Enterprises, a branch of ISLT, villagers are given equipment and training to produce handcrafts, which are then marketed internationally. In return the villagers must sign a contract agreeing to perform wildlife-friendly herding practices that will not harm the leopards or their natural prey. For more information on ISLT visit www.snowleopard.org.

Over 6,000,000 people have visited Binder Park Zoo and an additional 500,000 have been served through outreach programs since it first opened in 1977. It is located outside of Battle Creek, Michigan, on 433 acres of natural forests and wetlands. In the past 30 years, the Zoo has grown to be one of the leading cultural attractions in the region. It was created on the model of an entrepreneurial self-supporting nonprofit organization, and is managed by a zoological society board of directors to "nurture empathy, understanding, and conservation of nature." In the last several years a conservation education center, a 40-acre natural wetlands exhibit, and the 50-acre Wild Africa exhibit and conservation carousel have been added to the original 80-acre zoo. Binder Park Zoo serves over 60,000 people annually in 30 different types of formal education programs and is heavily involved in conservation of wildlife and natural habitats on five continents. In cooperation with the Association of Zoos and Aquariums (AZA) and others, Binder Park Zoo is actively working to conserve a wide array of endangered species both at the Zoo and worldwide.

On June 16th, 2008, the Binder Park Zoo, in Battle Creek Michigan welcomed the birth of this adorable little furball. These pictures were taken at 15 days of age.