Little Eno got off to a rough start when his mother was accidentally killed by a car in the spring of this year. Luckily, staff at the North Carolina Aquarium at Pine Knoll Shores found him early enough to save him. Unlucky for the aquarists, raising a baby otter is a lot of work, requiring around the clock bottle-feeding until he was old enough for fish. Additionally, they had to teach him to swim and hunt. Now six months old, he loves to romp (but apparently still enjoys eating and sleeping). 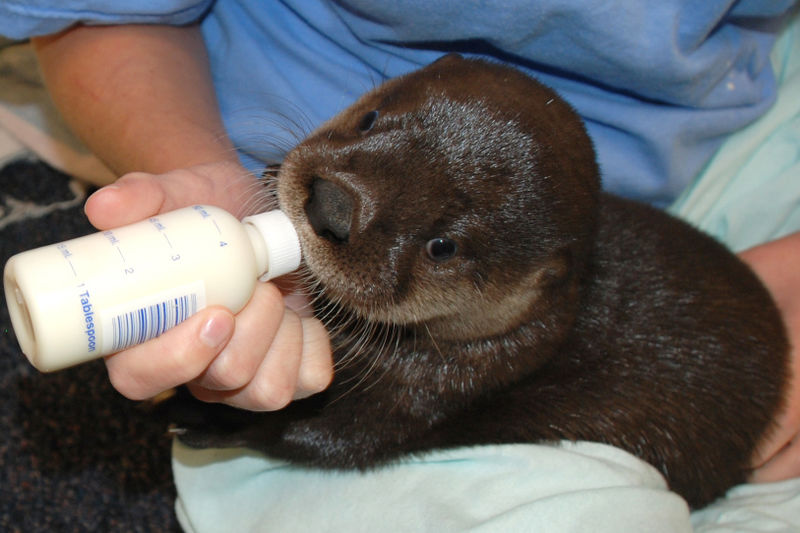 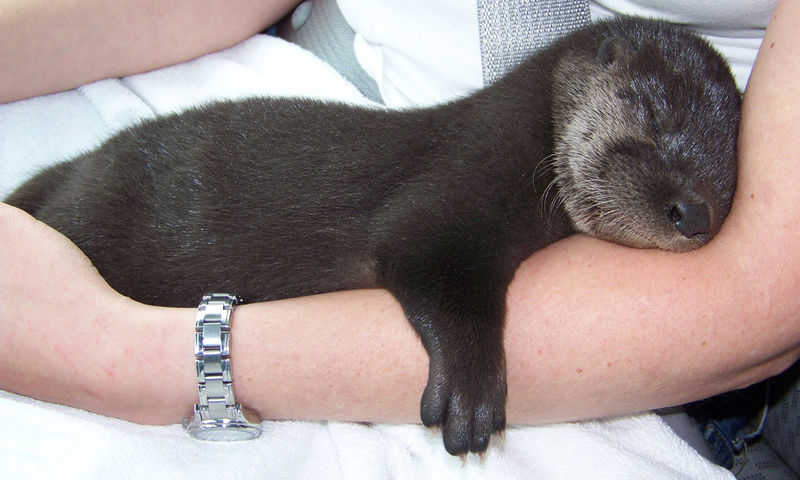 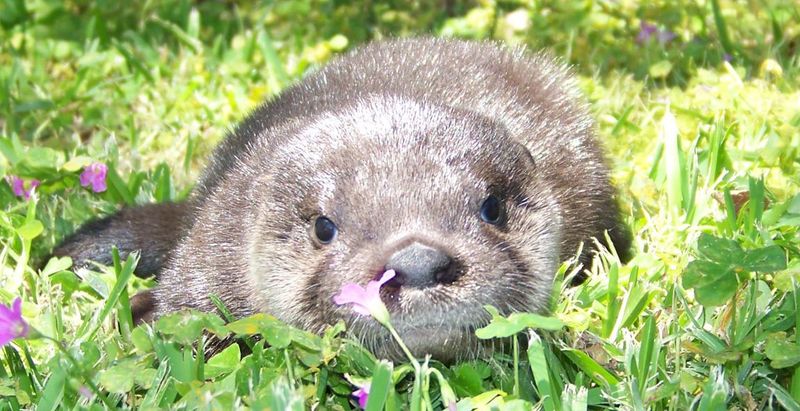 July 2008Eno the River Otter Late-night bottle-feedings were recently on the list of daily chores at the Aquarium.

The new job of mixing formula came when the Aquarium rescued an orphaned baby North American river otter, whose mother had been accidentally killed by a car.

Aquarium staff members quickly took on the role of playing parent to the otter kit they named Eno. Aquarists bottle-fed the youngster every few hours around the clock until he could trade formula for fish and other solid food. Additionally, they had to teach him to swim and hunt.

Eno has begun making short solo appearances in the River Otter exhibit, taking turns with the two adults, Pungo and Neuse. Aquarium staff hopes to eventually exhibit them all together.

The three otters bear the names of North Carolina rivers. Pungo and Neuse, both male, have been at the Aquarium together since it reopened in May 2006.

Eno has come a long way since he arrived at the Aquarium April 25. He has grown from 2 pounds, 5 ounces to about 9 pounds. As an adult, he likely will weigh between 18 and 25 pounds.

Since most otter kits stay with their mothers until they’re 10 months old, Eno had a lot to learn. Though otters depend on water for their existence, they usually spend their first few weeks in a dry den on land. Eno apparently hadn’t begun the transition.

Aquarist Meredith Owens cares for the Aquarium’s two adult otters, and has been Eno’s primary caretaker. She assumed the role of acclimating Eno to his natural element, much as his mother would have.

“At first he was scared of the water,” she said. “I had to either swim in the baby pool with him or draw my fingers through the water in front of him.”

Eno’s antics during his stints in the otter exhibit show no hint of his initial fears. He spends most of his time frolicking in the 16,000-gallon pool.

“He’s already a great swimmer and diver,” Owens said. “It’s clear he is very comfortable in the water, which is great for a hand-reared otter.”

Like many animals, otters are territorial and might not immediately welcome a newcomer. Pungo and Neuse are slowly being introduced to Eno behind the scenes, at first through sight, sound and scent. A clear plastic window divides their holding areas. Several weeks of this controlled exposure are necessary before limited face-to-face encounters are attempted.

If all goes well, their time together gradually will be increased until the three can be on exhibit together.

Even good-natured fun can be rough in the otter world. Though he has outgrown his baby face, Eno is still a lightweight compared to the other two. Owens wants him to be big enough to handle the roughhousing before he joins Pungo and Neuse permanently.

Meanwhile, he spends a couple hours a day in the exhibit by himself, swimming and exploring the surroundings. The timing for his brief visits varies so he can experience different conditions, including the presence of visitors watching him.

The otter exhibit replicates a typical riverbank otter habitat. It offers plenty of room for a third otter, and the addition of Eno will be in keeping with nature. Wild otters generally separate themselves into two groups — mothers with their kits, or small groups of males.

“So, having Eno live with Pungo and Neuse is a realistic scenario,” Owens said.

The Aquarium’s otter exhibit exemplifies the human impacts on a species, both negative and positive. Over-hunting the animals for their luxurious fur, loss of habitat and pollution had nearly wiped out the state’s otter population by the mid-1900s. Thanks to conservation and restoration efforts, river otters once again live in all 100 North Carolina counties.

“However, other states currently have populations in jeopardy,” Owens said. “Increasing our knowledge of this species, their habitats and lifestyles here in North Carolina can help protect otter populations that are in trouble elsewhere.”

As he gets ready to go on exhibit permanently, Eno is being trained to respond to his name or a signal for feeding and other necessary tasks behind the scenes. But, on exhibit, he and the other otters behave much as they would in the wild.

The Aquarium’s husbandry staff that works with otters has undergone stringent training and rabies vaccinations. The Aquarium also has the required wildlife permits. Owens cautions that no one should try to raise a baby otter, or any other wildlife, at home.

“ Though he was raised in captivity, Eno is still a wild animal with wild instincts,” said Owens. ”Not only can they become aggressive very quickly, they need lots of room for running and swimming.”

Little Eno got off to a rough start when his mother was accidentally killed by a car in the spring of this year. Luckily, staff at the North Carolina Aquarium at Pine Knoll Shores found him early enough to save him. Unlucky for the aquarists, raising a baby otter is a lot of work, requiring around the clock bottle-feeding until he was old enough for fish. Additionally, they had to teach him to swim and hunt. Now six months old, he loves to romp (but apparently still enjoys eating and sleeping).